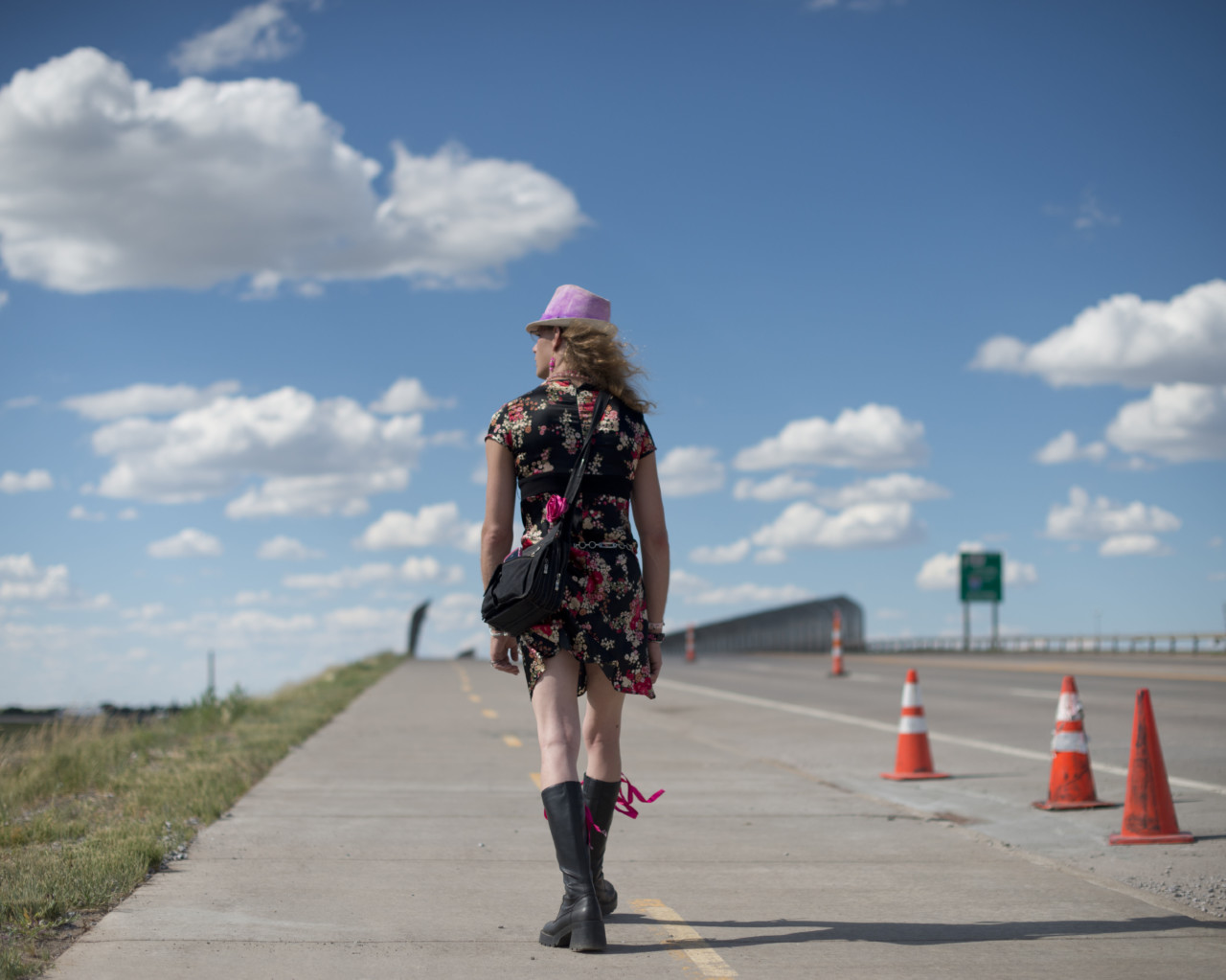 In 1998 21-year-old student Matthew Shepard was brutally beaten, tortured and left to die near the small city of Laramie in Wyoming, in the United States. He died six days later from his injuries. During the prosecution of Aaron McKinney and Russell Henderson for murder, it was demonstrated by the courts that Shepard’s sexual orientation – Shepard was openly gay – played a role in motivating the attack. The pair were given two consecutive life sentences.

The nationwide fall-out from the much-publicized crime resulted in Congress passing the Matthew Shepard and James Byrd, Jr. Hate Crimes Prevention Act, which was signed into law by President Obama in 2009. The measure expanded the 1969 United States federal hate-crime law to include crimes motivated by a victim’s actual or perceived gender, sexual orientation, gender identity, or disability. However, Shepard’s home state of Wyoming has refused to adopt hate crimes protections for the LGBT community. 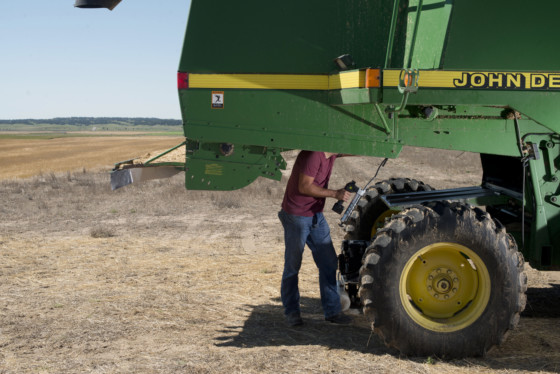 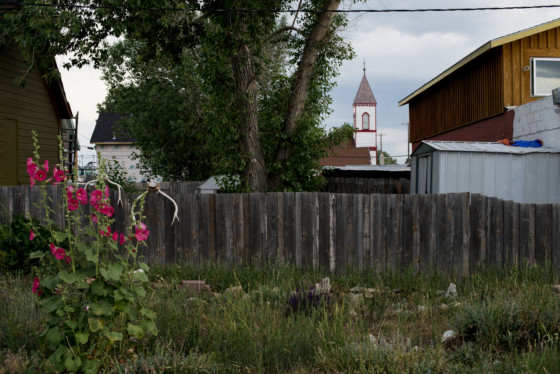 In 2016, Magnum’s Carolyn Drake visited Laramie, Wyoming and the surrounding areas Cheyenne, Casper, Pine Bluffs areas, and met LBGTQ residents living with the spectre of this heavy history, in a state that, despite calling itself ‘The Equality State’, still – in law – offers them fewer protections than other states. Carolyn Drake presents their stories in the following vignettes. 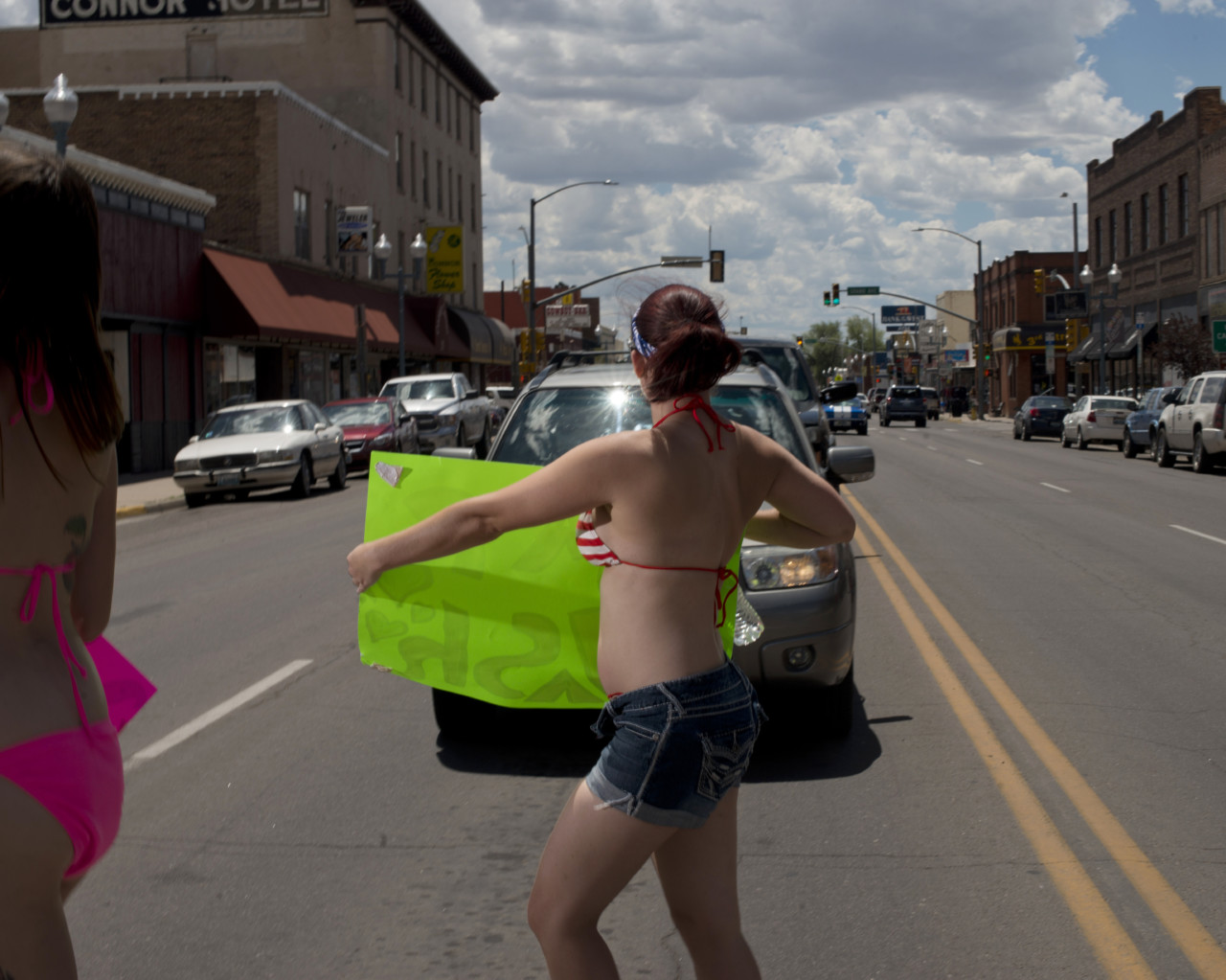 Carolyn Drake The Laramie Burlesque Troupe, which embraces the gamut of sexual and gender orientations, has a car wash in downtown Laramie to raise money for Laramie reproductive health. © Carolyn Drake | Magnum Photos

My plans for Wyoming started with research about the 1998 torture and murder of a gay University of Wyoming student named Matthew Shepard. His murder sparked outrage, and brought attention that helped enact hate crime legislation at the federal level and in many states, but not in Wyoming. Yet I suspected that this tragic incident may have encouraged people who didn’t fit traditional gender and sexual orientation norms to start being more vocal, or less secretive, about their own perceptions of self. I reached out to people at Wyoming Equality and the Rainbow Resource Center at the University of Wyoming, and decided to try to view Wyoming through the lens of “queerness,” which is meant to encompass gay, ace, demi, panromantic bi, trans, asexual, lesbian, and much more, including straight allies. Halfway through the assignment, Maurice Watson, who I had photographed rehearsing a dance performance, said to me, “I am a gay man. I am a man who has always loved the attention and touch of a man. I wouldn’t consider myself queer.” I conceded there’s no proper word to sum up this varied space. It was a pleasure to wander through a territory like Wyoming, that has long been associated with straight archetypes, and look against the grain. 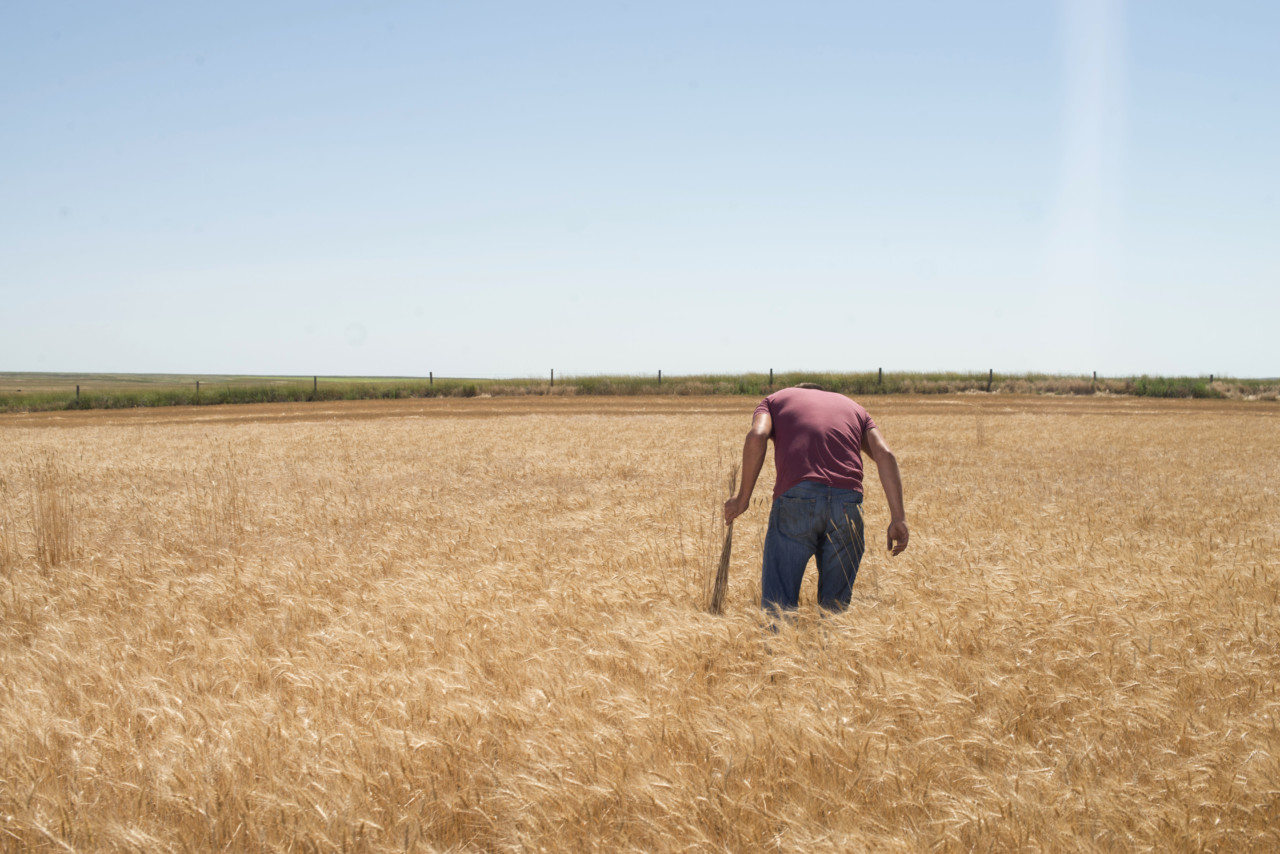 "I was so afraid I was going to come back here and just fall over,"

Matt Hockersmith, whose parents were raised on Wyoming homesteads, said realizing as a child that he was gay sent him into a crisis. “I had a gun, and at one point I felt I would rather have died than have someone find out. But that’s when the Internet was coming around, and I started researching and meeting people online, and realized, ‘okay I’m not alone, I’m just in a small town,’ and that’s when I started thinking,  ‘I just have to go, I just have to leave.’” So he went to New York and lived for a while. “I was so afraid I was going to come back here and just fall over, it’s so vast and empty,” he said. “Then I went to the bluffs one afternoon, and overlooking the farm I was like, holy shit, I live here! New York was good for me like that, to remind me how mystical this place is, you know, my ancestors’ energy is here.” Now being out in Wyoming is fine as long as he’s single. “I met someone 12 miles away, and we hit it off, but I said, ‘look, I’m totally out,’ and he couldn’t handle that. He’s still very much in the closet, so it’s tricky.”

"...some people came out, some people went deeper in the closet, but everyone felt guilty to some degree." 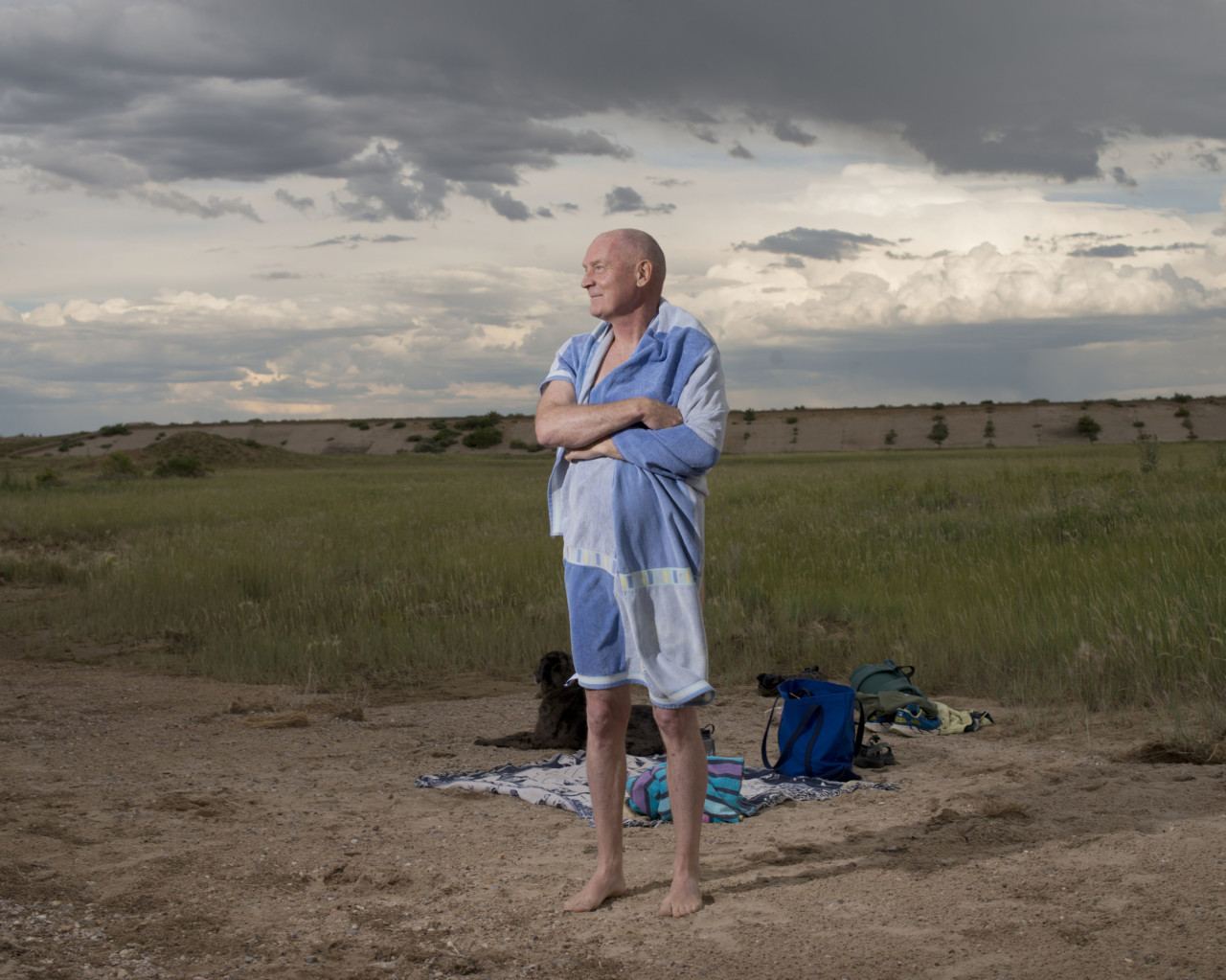 Jonas Slonaker, who lived in Laramie when Matthew Shepard was killed, recalls, “Afterwards, some people came out, and some people went deeper in the closet, but everyone felt guilty to some degree.” How have things changed?  “I was at the grocery store one day and I saw this couple, and a guy said to his girlfriend, ‘Oh that guy is such a faggot.’ And his girlfriend says to him, ‘Honey, we can’t say that in public anymore.’ I was like, ‘What?’ I just laughed about it. So it’s different now, but maybe not really.” "Laramie, due to Matthew Shepard, has a hate crimes ordinance, but at a state level it keeps getting defeated" 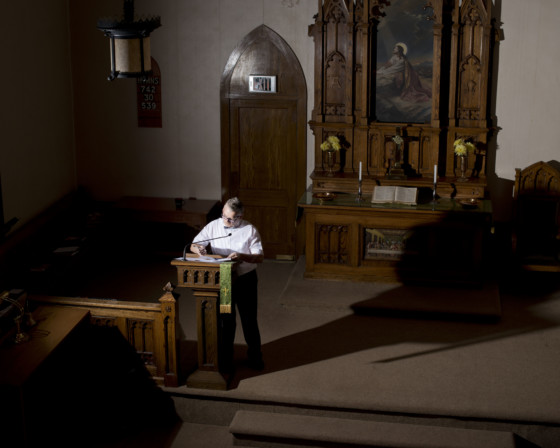 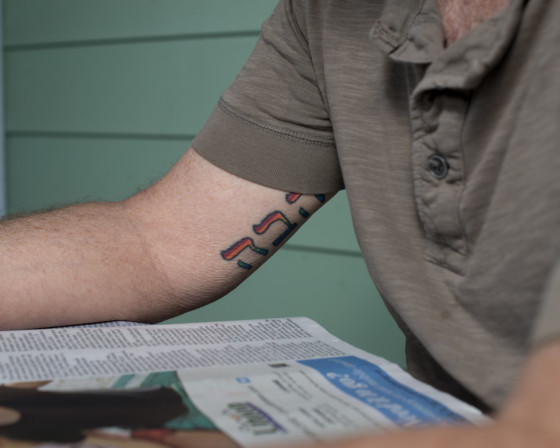 Kenneth Ingram, who recently moved from Texas, is a gay pastor at St. Paul’s United Church of Christ in Laramie. “The big push now in Wyoming, since the religious groups and the citizens have gotten approval for gay marriage, is hate crime legislation. Laramie, due to Matthew Shepard, has a hate crimes ordinance, but at a state level it keeps getting defeated. It’s the next battle,” he says. The rainbow colored tattoo on his arm says ‘love’ in Hebrew.

"We talked about it, it wasn’t a dramatic thing." 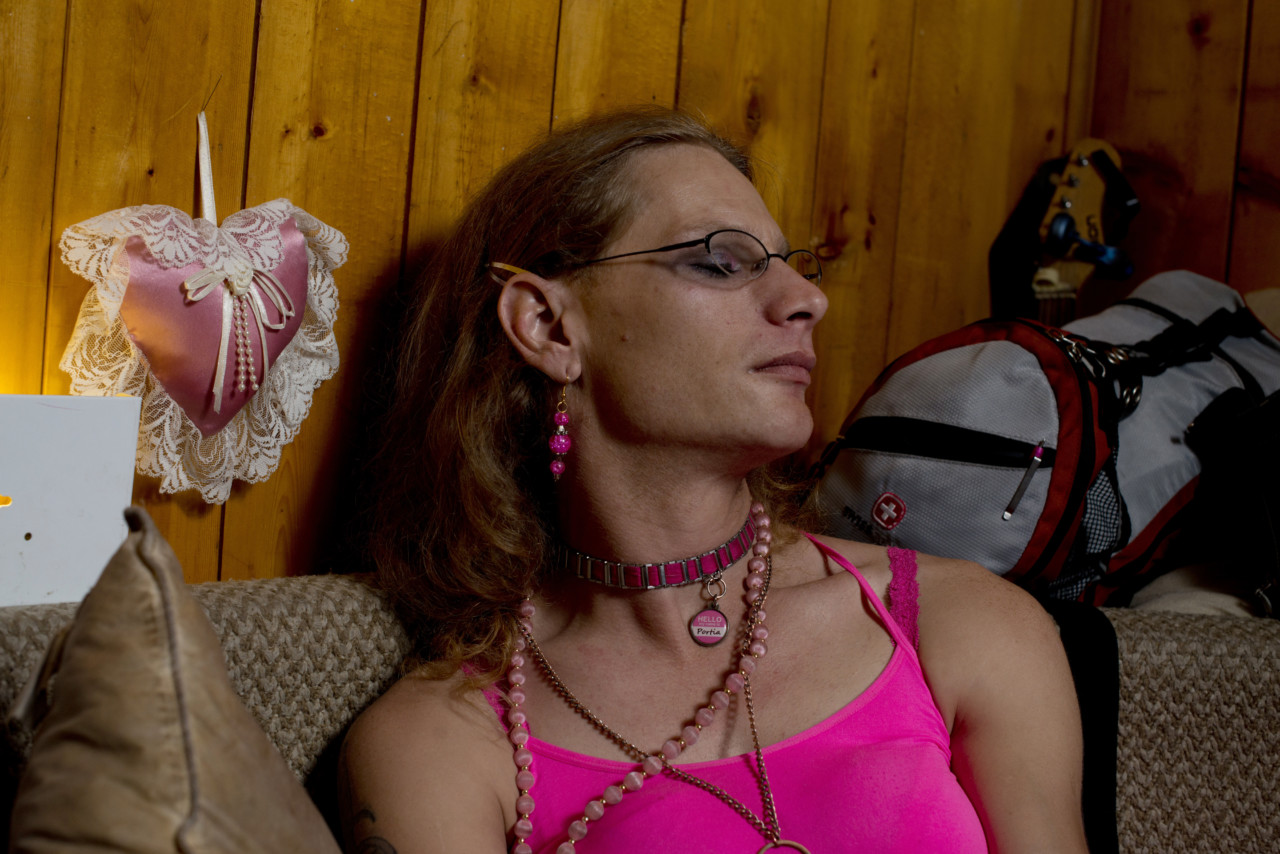 Portia Smith told her mother that she was transitioning to female in 2015. “We talked about it. It wasn’t a dramatic thing,” she said. “She just wanted to make sure that when I went through Hormone Replacement Therapy I did it within the health care system. It takes years, the same amount of time a young person goes through puberty. She wanted to make sure I didn’t get the hormones elsewhere – you can buy anything on Amazon. So I’m holding out until the government says that HRT is covered by public health care. It’s why my voice is still this way.” 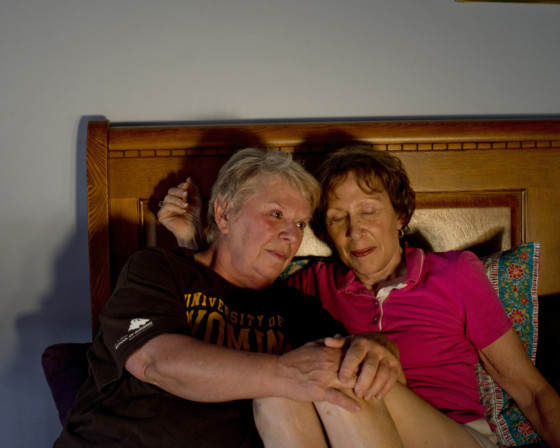 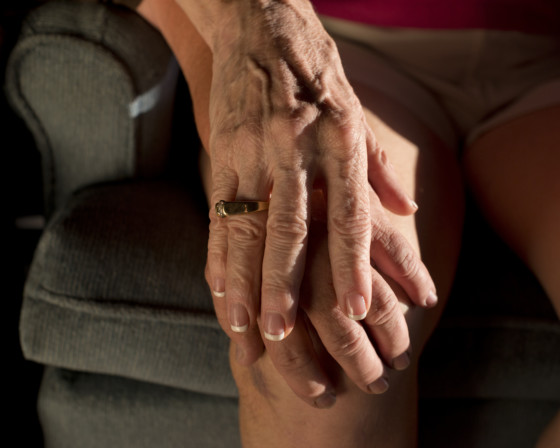 Pam Clarke and Diane Kempson, partners for 20 years, are professors at the University of Wyoming. Together, they run the Cowgirl Horse Hotel and are making plans to get married now that it’s legal in Wyoming. “I know some people get married because they want the same rights as everyone else, but for us, its just we want the legal protection, the ability to turn off the ventilator and things like that… We have nothing in common with the queer community, really. Maybe its because we’re older, we’ve figured ourselves out. We’re not political, we’re horse people. We could talk about horses all day.”

Bee Bennett, a trans woman, talked about being dragged out as a gay teenage boy. “I’ve always been attracted to men. I had a boyfriend when I was 14 in junior high. He was a jock, and I was popular. We had a friend who knew about us. We had been trying to keep it secret, but in the end we got dragged out. This guy told everyone. After that, we were pretty accepted. But in high school, it was totally different. The cowboys that hung out in the parking lot, they would say how they were going to jump me, but they never did. I had a sister in the school. She was older, and she protected me. I’ll say Wyoming is still way behind in regards to gender, but I was pretty accepted.” 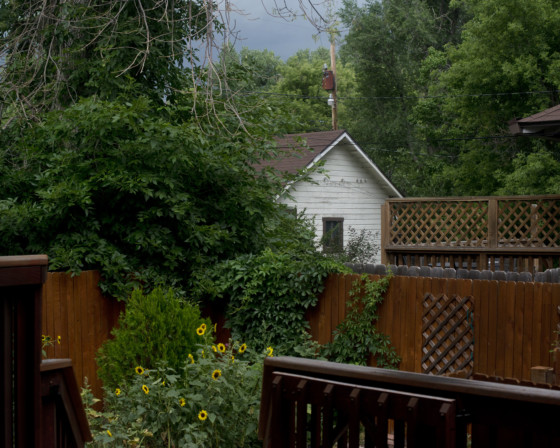 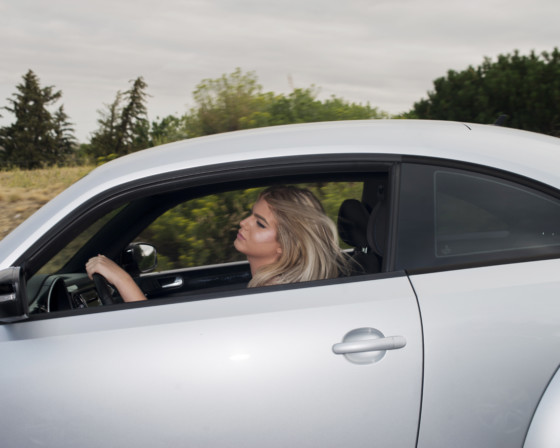 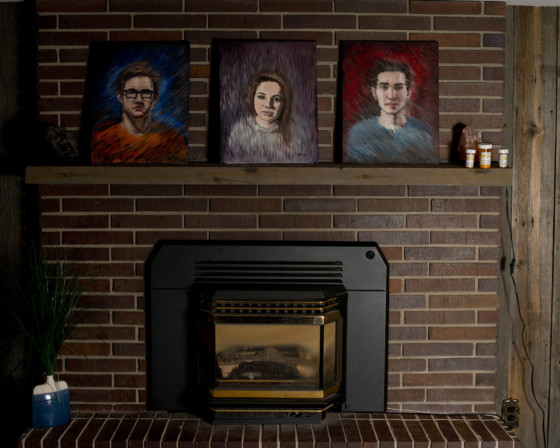 Carolyn Drake Cass Wolfe's paintings of herself before her transition (left), her sister, and brother. © Carolyn Drake | Magnum Photos 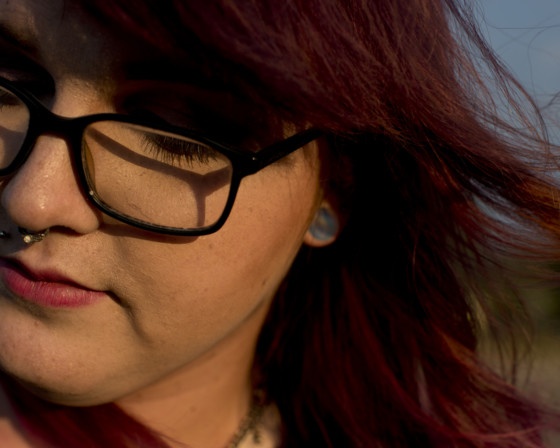 "What sane person would put themselves through this much pain if it wasn’t real?"

Cass Wolfe, an artist and college student, spoke about her transition. “When I was young, like 8, I started wearing women’s clothes, hiding in the closet literally. I got caught once, and they just scolded me. They just thought I was goofing around. I used to be the protective brother. I would protect my sister. But after we got through the teenage bullshit we ended up being really close. Theres this Disney Channel show called ‘Sister Sister’, and we made up this handshake even before I came out. It was our sister handshake. That was before, when I was a dude.

Acceptance is a big part of my story, but there are times I get called out. There’s this one dude who is like, ‘Just don’t chop off your penis. It’ll never be the same.’ But it doesn’t bother me. Lots of people in our generation are finding gender more fluid, but anyone that says this is trendy or whatever, I’ll just say, ‘What sane person would put themselves through this much pain if it wasn’t real?’

One year after I started my HRT, I stopped hiding my transition and started wearing women’s clothes. On my 24th birthday, I was like, I don’t want to keep getting older, but I do want to keep going with my transition. It was a liberating moment.” 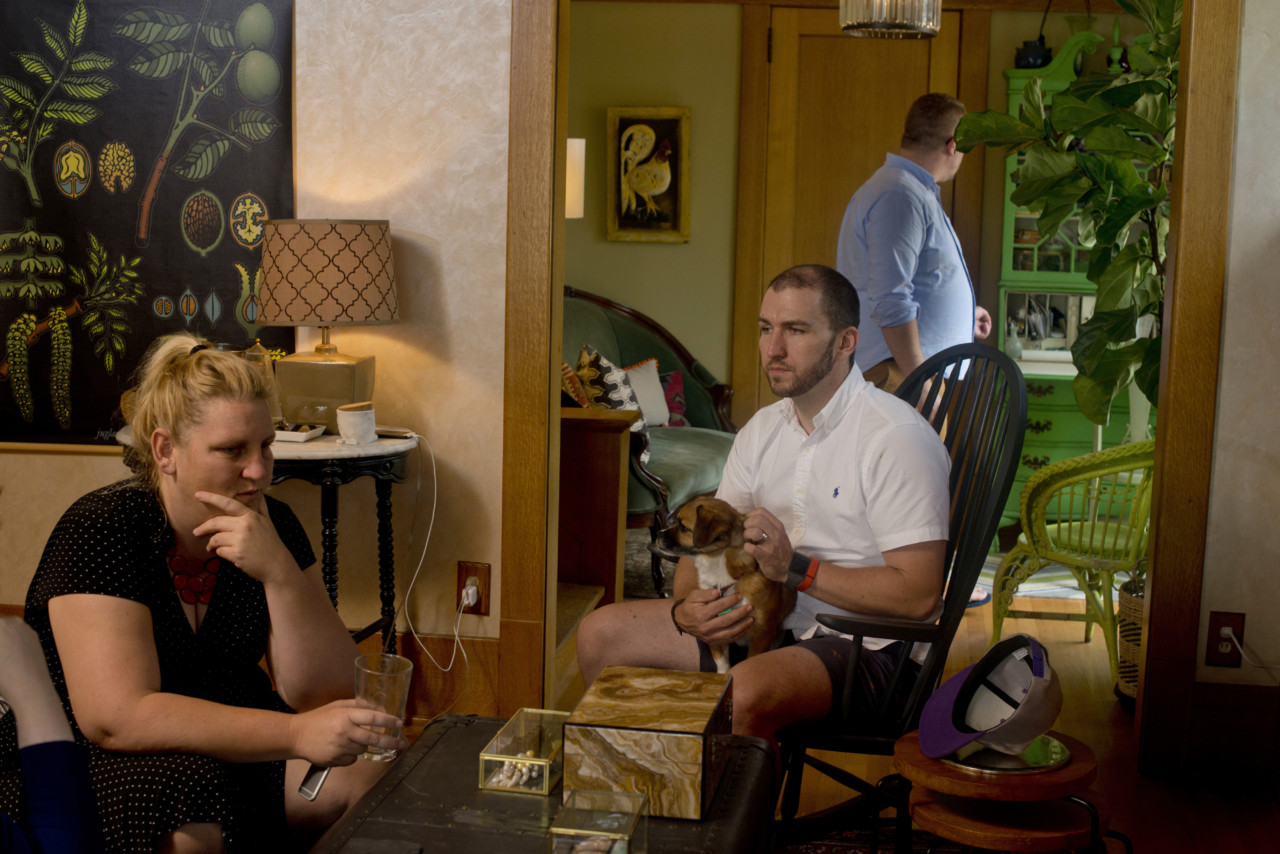 Carolyn Drake BBQ at the home of RJ Glantz and Travis Kirchhefer. Sara Burlingame who performed the wedding ceremony of RJ and Travis, is a guest. Cheyenne. © Carolyn Drake | Magnum Photos 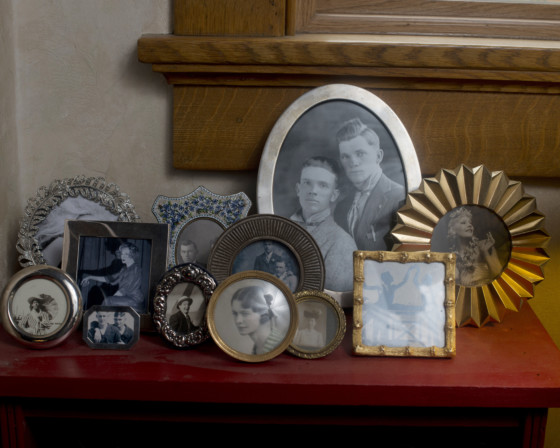 "...no progress but we didn’t go backward"

Travis Kirchhefer, an attorney, and RJ Glantz, a grants administrator, met 15 years ago in college and got married in 2015. Their wedding ceremony was performed by Sara Burlingame of Wyoming Equality: “I fit in because I wanted to celebrate their love, queer love, love in Wyoming. just all the love and they let me, so it was a good match,” she says.

Sara reflects on the current state of equality law since Trump’s presidential win: “There was some constant low-level terror after this election when Wyoming turned out in record numbers for Donald Trump and we became the ‘Most Conservative State in the Country’. I had just given a talk in Portland, OR this summer, lightly bragging that although we were slow to make progress on passing progressive legislation, we hadn’t passed a single bad bill in over a decade. And then Trump was elected and the dread set in; maybe our state had turned. I am happy to say that mid-way through our legislative session our old pattern held out. We killed two bad bills, one a FADA bill that would have given anyone a license to discriminate against the LGBT community, including teachers, doctors and county clerks, and the other a bathroom bill that would have made transgender people felons and cited for ‘public indecency’ for using the bathroom that corresponded with their gender identity. And we failed to pass a bill that would have made employment discrimination illegal. So we held steady: no progress but we didn’t go backward. That may be the sad epitaph for our state right now.” 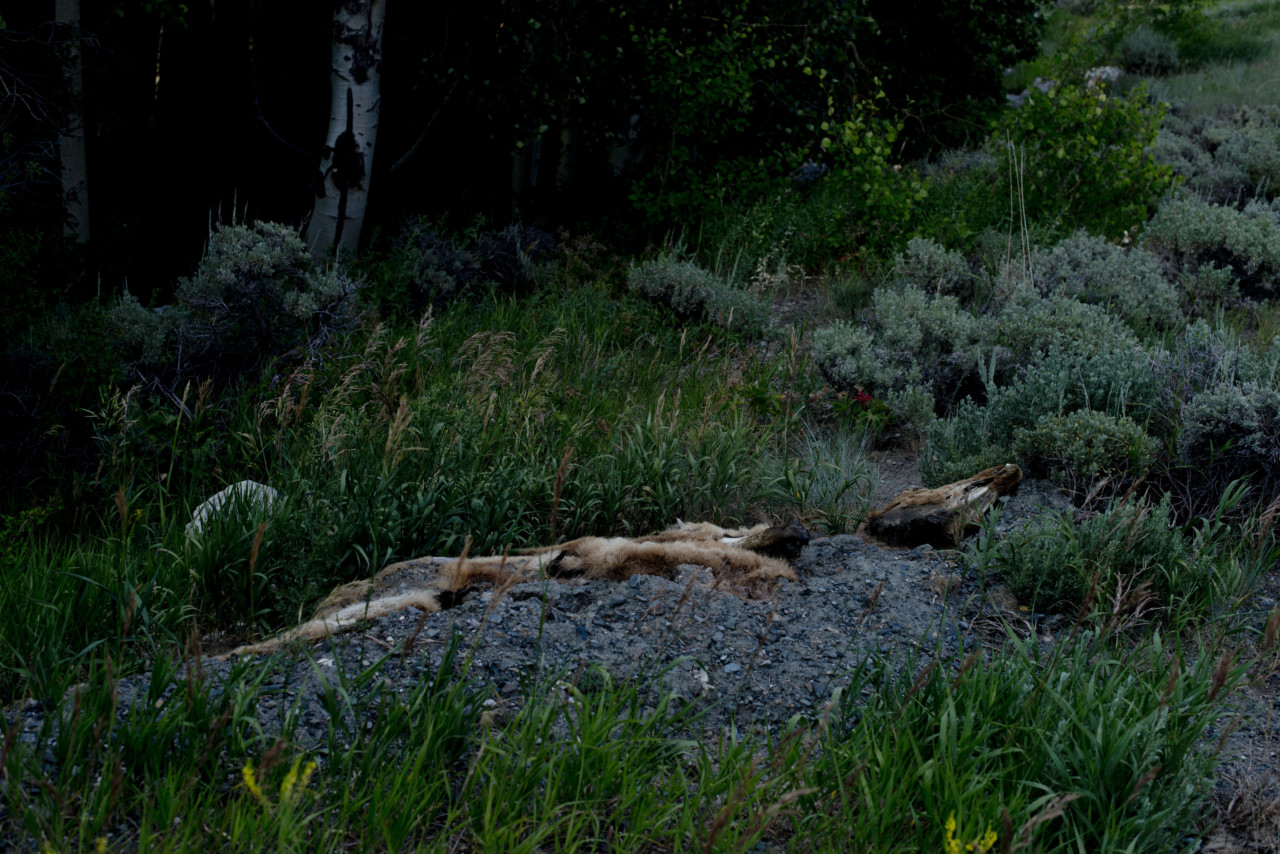