13
Larry Towell | No Man's Land Masked Palestinian demonstrators preparing to throw molotov cocktails toward Israeli soldiers. Three or four youths were making molotov cocktails out of gasoline and sand in the adjacent alley, lig (...)
hting them, and throwing them at army jeeps. If someone hit a jeep, everyone would cheer. The wall was later demolished by Israeli soldiers. Ramallah, West Bank, Israel/Palestine. 2000. © Larry Towell | Magnum Photos
License | 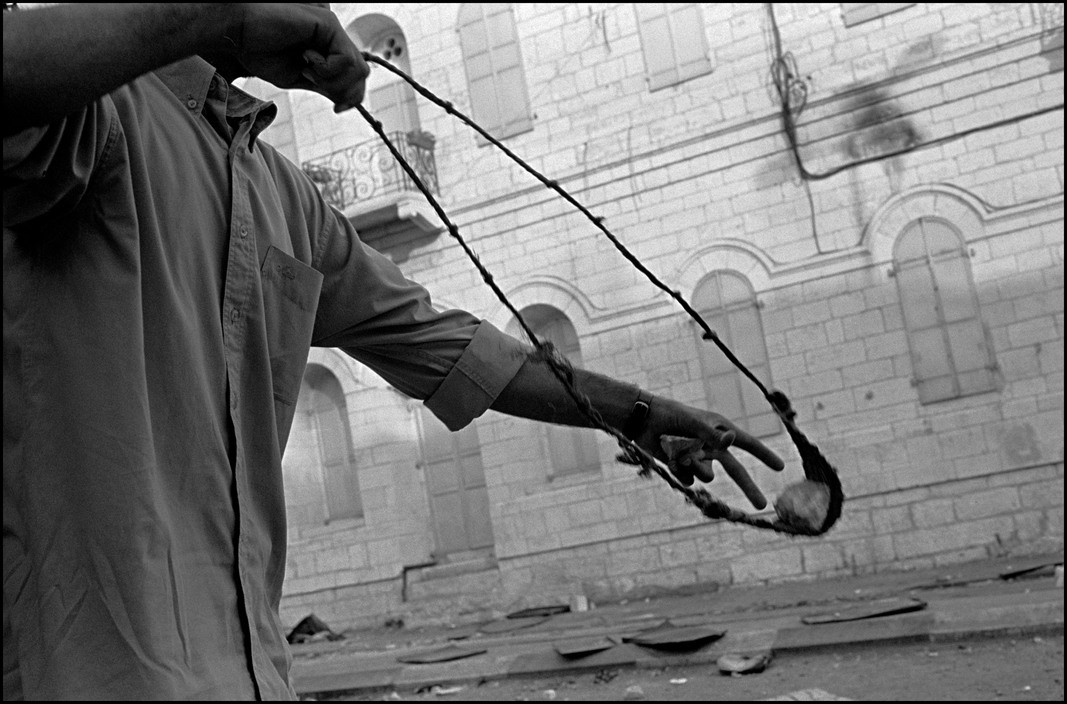 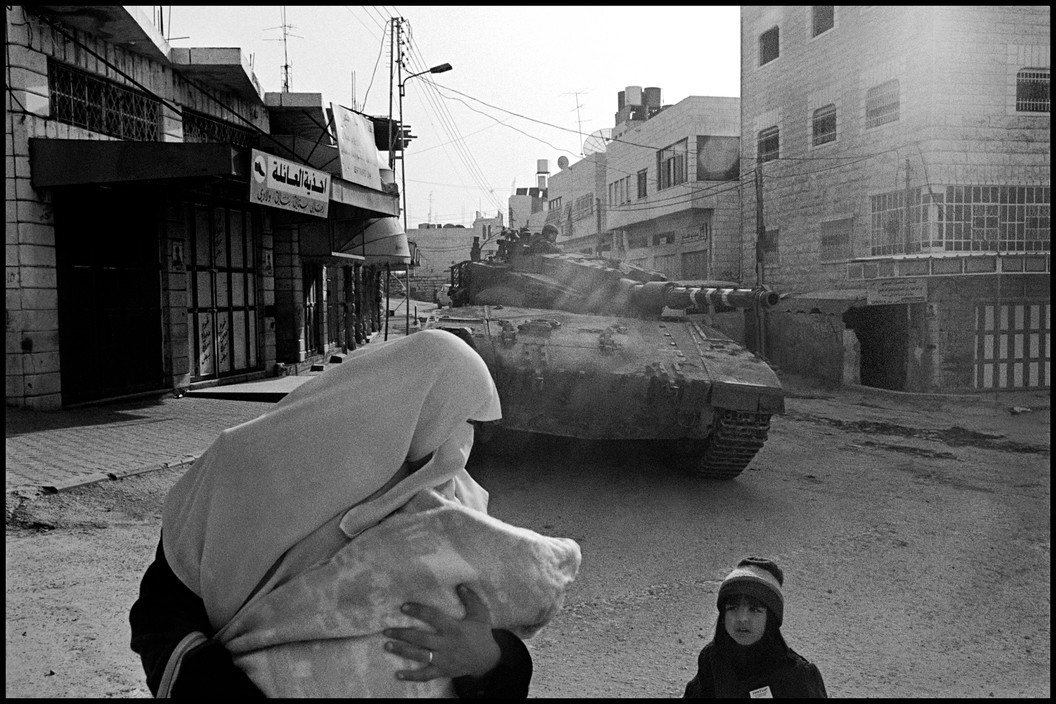 13
Larry Towell | No Man's Land A religious Muslim woman and her children navigate their way around an Israeli tank during the Army's invasion of Hebron which helps to enforce a 24-hour curfew on the city center. Hebron, West Ban (...)
k, Israel/Palestine. February, 2003. © Larry Towell | Magnum Photos
License | 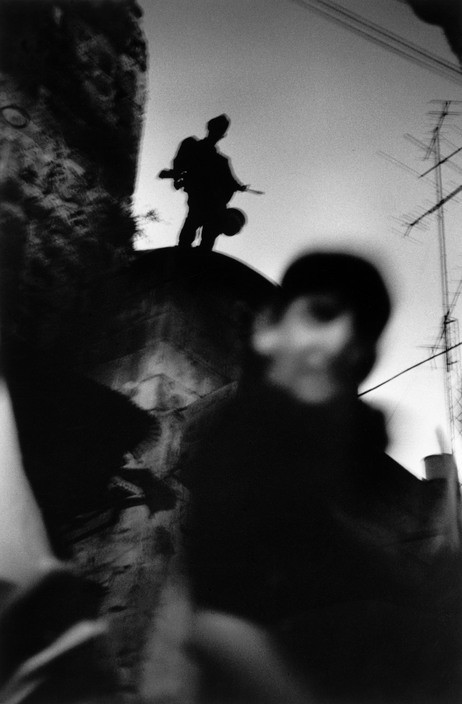 13
Larry Towell | No Man's Land An Arab child and Israeli soldier after a demonstration by Israeli settlers who marched through the Arab quarter of East Jerusalem. They were protesting the September 1993 signing of the Israeli-Pa (...)
lestinian peace accords. East Jerusalem, Israel/Palestine. 1993. © Larry Towell | Magnum Photos
License | 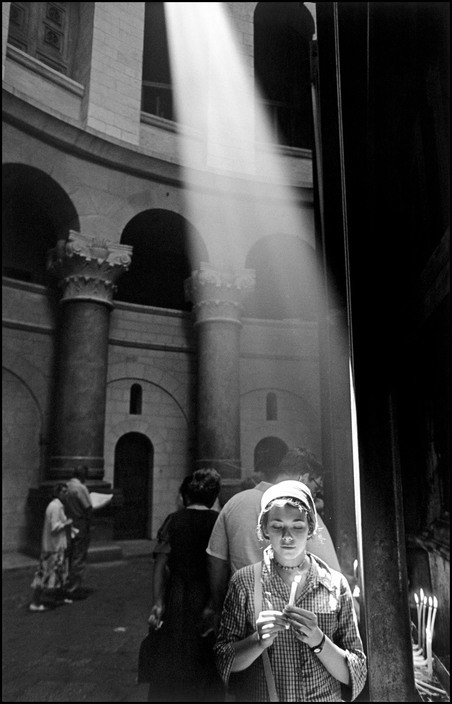 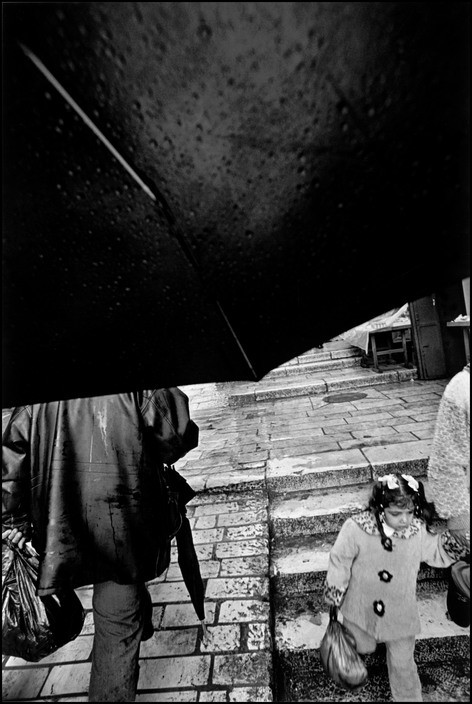 13
Larry Towell | No Man's Land A home destroyed on the edge of Balata Refugee Camp. Residents wander through the wreckage of a home following Israel's withdrawal from Nablus. Holes were blown through the walls with tanks and mis (...)
siles from Apache helicopters. The local cemetery is seen through one of the holes. Nablus, West Bank, Israel/Palestine. May, 2002. © Larry Towell | Magnum Photos
License | 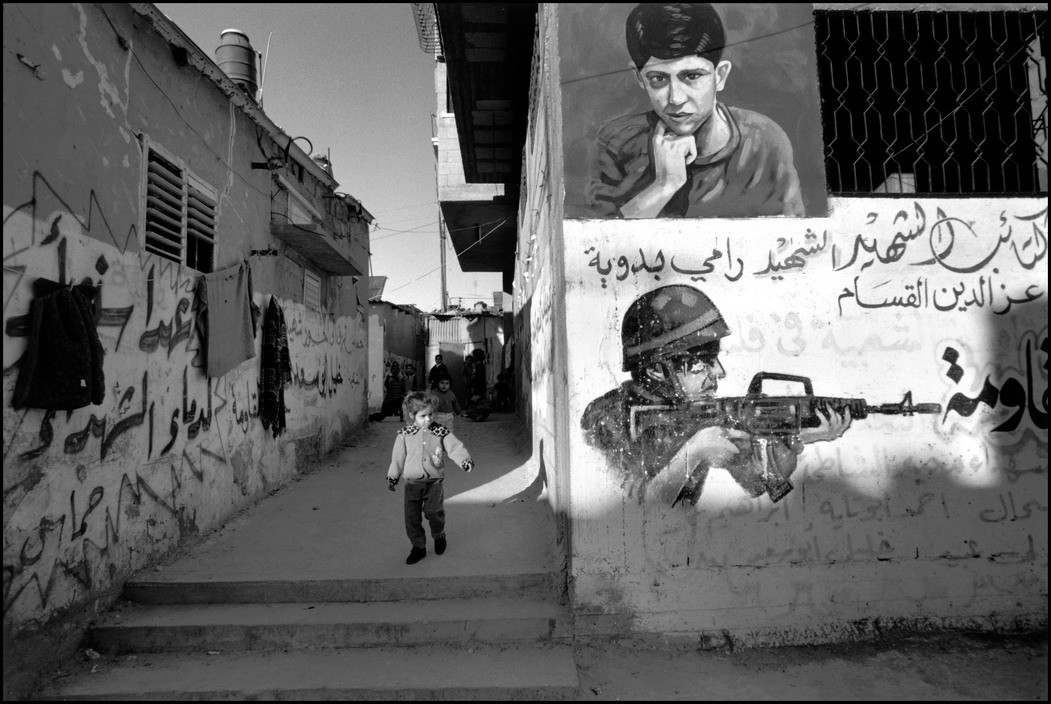 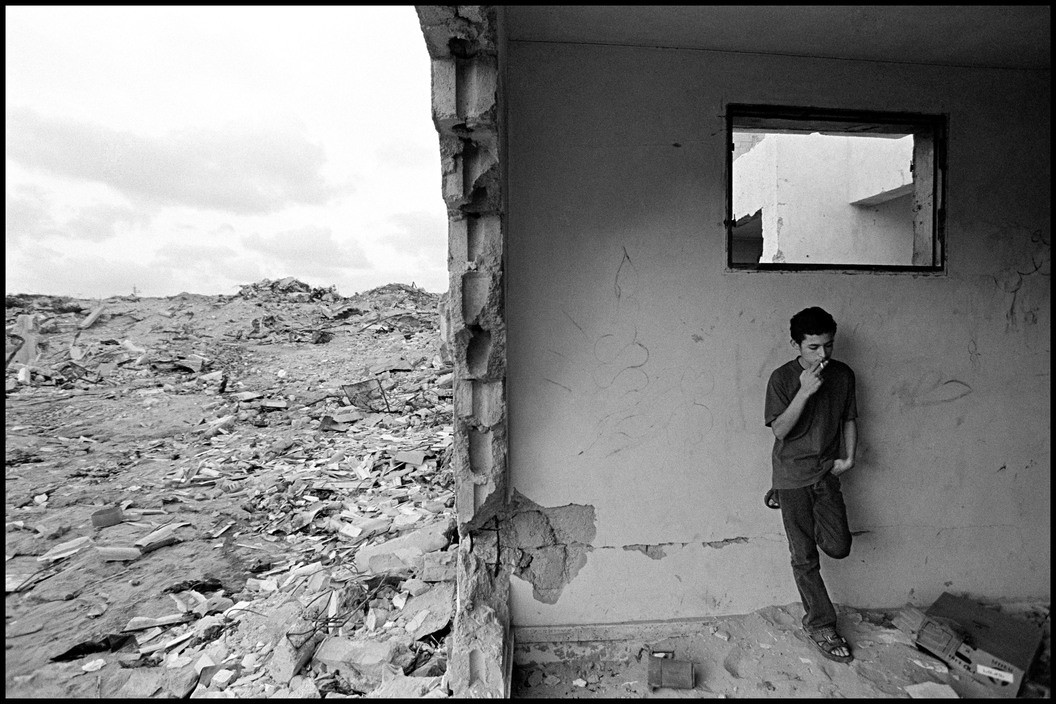 13
Larry Towell | No Man's Land A Palestinian man runs through an opening in the wall where the last 8 meter high concrete slab seal is to be set in place. Cut off from Israel and often from the rest of the West Bank, Palestinian (...)
s will lose half of their land, plus access to employment, schools, shopping and hospitals. Many will find themselves living in walled-in cantons. Jerusalem, West Bank, Israel/Palestine. 2004. © Larry Towell | Magnum Photos
License |
13
View all

This is photographer and journalist Larry Towell’s documentary account of the Palestinians. It reveals the landscape of a scarred and battered “no man’s land” – the area that calls itself Palestine and Israel, but which is neither fully – and the daily lives of the people who live there. Photographed over a period of ten years and completed with the support of the prestigious Henri Cartier-Bresson Award (with Towell as its first recipient, in 2003), this is Towell’s most important body of work to date and a landmark of photographic art and journalism. Towell describes the physical and psychological walls that divide Palestinians from Israelis and a land divided against itself.

As Towell relates in an excerpt from the book, “Today, the little that remains of Palestinian land has been cut to ribbons by a military infrastructure of settlement roads, checkpoints, watch-towers, security gates, walls and weapons, guaranteeing Israel’s ultimate control and extending it to satellite settlements, the purpose of which is clearly expansionist. By granting Israel enough political immunity to flout international law, the U.S. has helped turn it into a pariah, condemned by the world community.”

Towell illustrates this through his black and white photographs, many of them epic panoramas, which are simultaneously sad, haunting, breathtaking and beautiful. With a foreword by Robert Delpire.