In the footsteps of Capa and Steinbeck, Magnum photographer Thomas Dworzak and writer Julius Strauss travel from Moscow to Ukraine and Crimea The sun was high in the Crimean sky when we arrived at the beautiful villa of Vladimir Putin’s best-known and most acerbic ideologue. The expansive outdoor terrace where he asked us to sit gave for a stunning, unhindered view over the Black Sea.

We were in the quiet village of Koktebel. Until just over three years ago this had been Ukraine. Now, for all practical purposes, it was part of Putin’s Russia.

Several hours later, laden down with magnums of first-rate champagne from our host’s cellars and pots of honey from his beehives, we staggered back onto the street.

Dmitry Kiselyov had fed us with exquisitely-cooked mussels, shark he had caught himself in the bay, and a long list of Moscow’s grievances against the West.

“I believed in western democracy in the 1990s,” he said. “But what have we got in return? Anti-missile defence. The destructive actions in Ukraine. The west has been deliberately aggressive.” In 1947, Steinbeck wrote that Capa and he had set out to ignore the anti-Soviet prejudice they found in the West and the political debates raging around Moscow’s intentions and document instead the lives of ordinary Russians.

“We went not to enquire into politics, but to observe the private life of the Russian people,” Steinbeck wrote. “We wanted to know what the people wear. What do they serve at dinner? Do they have parties? What food is there? How do they make love and how do they die?”

A Russian Journal, a 212-page account of their visit to Moscow, Kiev, Stalingrad and Georgia was published the following year. As promised, it was heavy on description of food, clothing, customs and impressions, and light on political interpretation.

“We have no conclusions to draw except that Russian people are like all other people in the world,” Steinbeck wrote. “Some bad ones there are surely, but by far the greater number are very good.”

Our project – to follow in Capa and Steinbeck’s footsteps – was born over a bottle of wine in the upstairs of a London pub. I had worked with Thomas in Kosovo, Afghanistan and Iraq and we had become good friends.

We wanted to commemorate the 70th anniversary of Magnum, the photo agency that Capa co-founded only a few years before he was killed in 1954 by a landmine.

And we also wanted to take the pulse of Russia and two of the Soviet Union’s most important successor states at a time when western politicians are once again painting the Kremlin as an existential threat to Western civilisation.

Steinbeck and Capa’s trip was a foray deep behind the lines of the emergent Cold War of the late 1940s. But we found ourselves, by staking out the very same territory, travelling through a fragile patchwork of new states, many of them born out of bloody conflict, and crossing disputed frontlines, the fracture between two geopolitical tectonic plates.

We crossed, skirted or, when we could not gain entrance, peered across the borders of Abkhazia, South Ossetia and The Donetsk People’s Republic – breakaway republics that cleave to Moscow and are, in turn, quietly supported by the Russian Ministry of Finance.

But we also travelled to Ukraine and Georgia, two former Soviet states that now violently reject Russian hegemony and values and see their futures in the ranks of Nato and at the European political hearth.

We spent two weeks in Moscow, a few days in occupied Crimea, a week in Ukraine, and a week in Georgia. 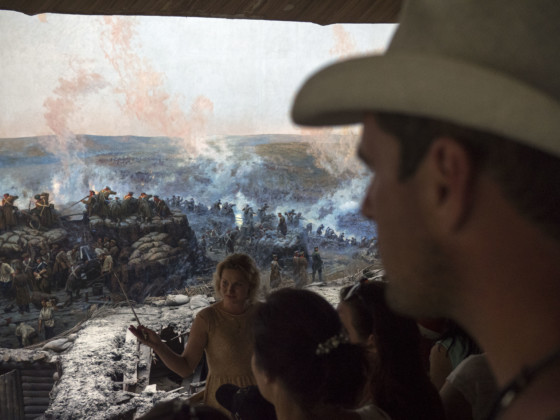 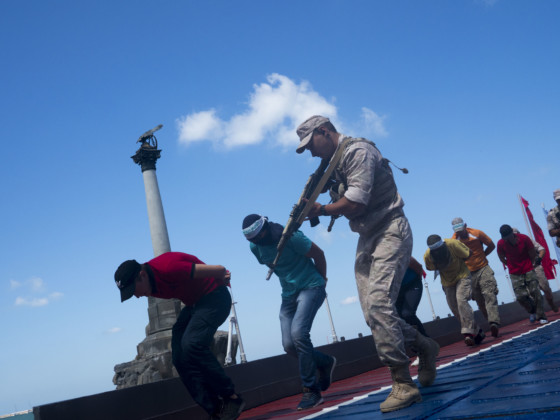 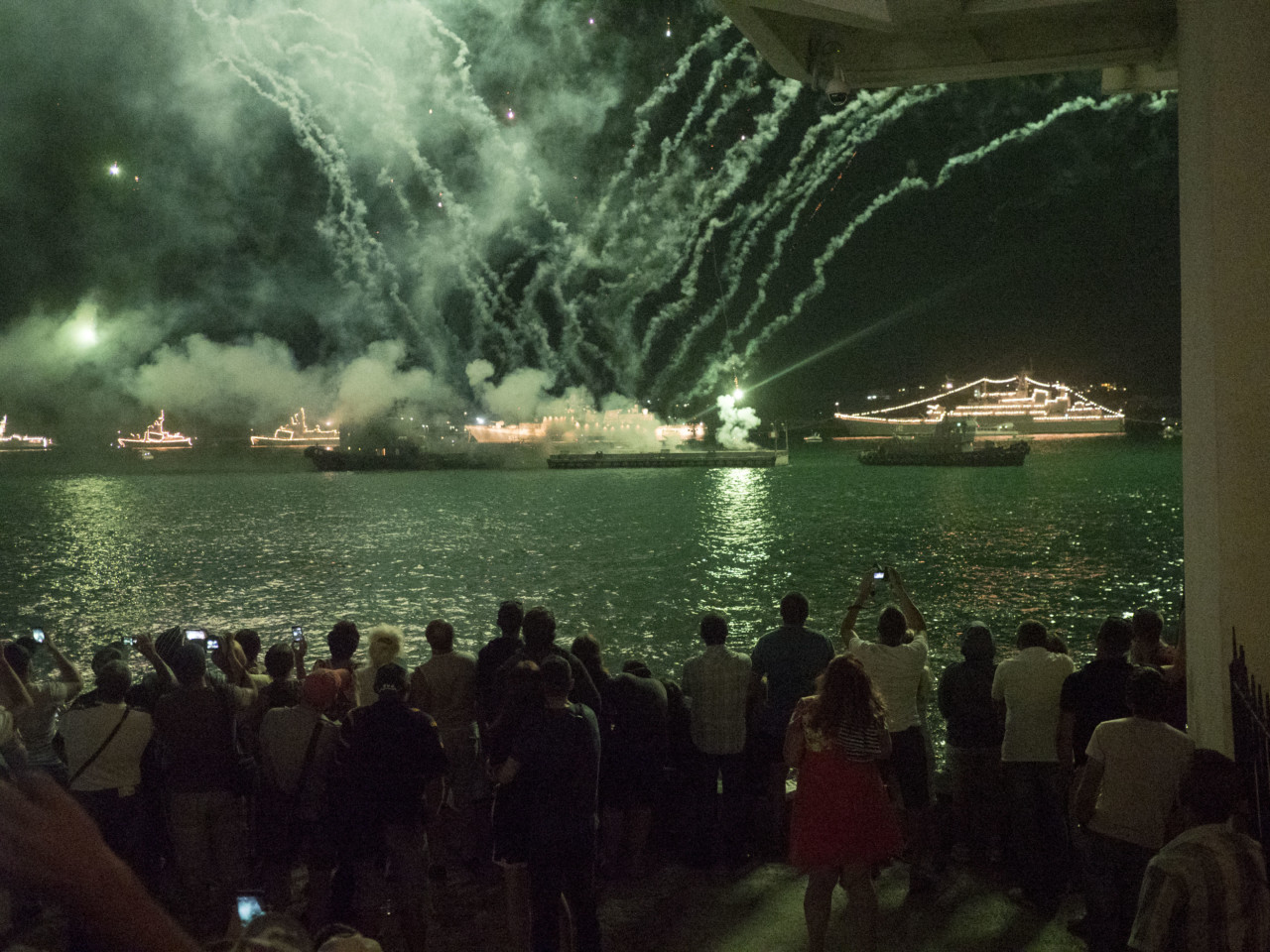 When we arrived in Kiev, the Ukrainian capital, just as in Moscow, soldiers were on parade, heavy weaponry was on display and there was talk of more war.

In Stalin’s time Kiev had been deep inside Moscow’s orbit. But now it was the capital of a country that, despite strong cultural and linguistic ties, had a virulent hatred for almost all things Russian.

We set out to visit the village of Muzichy. Steinbeck and Capa had been welcomed here with tables groaning with food. But when I asked Maria Masovets, the mayor, what she thought of Stalin, her face crumpled and tears began to flow.

“They took my father away,” she said. “When he came back he couldn’t even stand. He weighed less than 40kgs.” 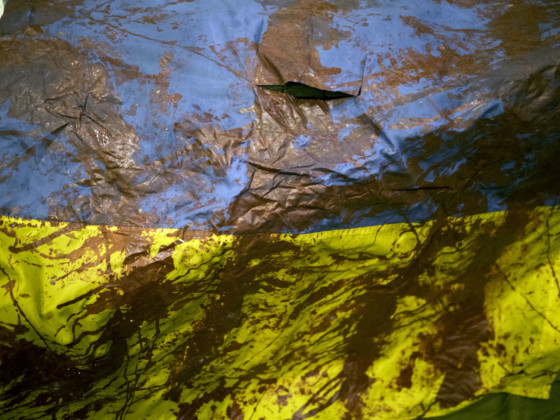 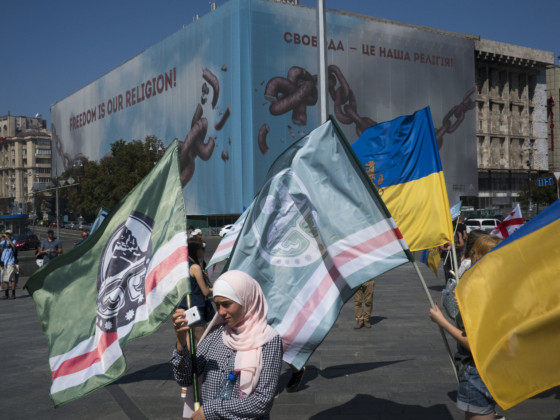 And then, while researching our project, we came across something that would throw a whole new light on our project and add a rich new layer of complexity.

We found the Soviet state archives from the original trip, prepared for the state security service. And they laid bare the extent to which Steinbeck and Capa, who had been gently sympathetic towards Moscow, had been manipulated by the Kremlin’s apparatchiks.

There were revelations everywhere. Steinbeck and Capa’s favourite interlocutor, a retired Georgian cavalry officer, had, it seemed, been a KGB operative.

The tables of food waiting for them at the collective farms they visited had been carefully pre-arranged even as other farmers were dying of starvation nearby.

Steinbeck and Capa, it seemed, had been fed a line. After all the glitz and the glamour and ideologues and image-makers, it was time to visit the frontline of Putin’s war with the West, to see what it actually looked like on the ground.

So we took the train to the front. And there, only a few miles from Russian-backed rebel positions, we listened to the sound of shells landing in the distance as a man offered children rides on a shabby horse and cart.

The next day I peered between Ukrainian armoured vehicles out into no-man’s-land. I could just make out Donetsk airport, the scene of a brutal battle in 2014 that had left many hundreds of Ukrainians dead.

In Moscow and Kiev the war had felt like a glamorous but distant being, eliciting patriotism, defiance and a vague sense of a willingness to sacrifice for the good of your country.

But here on the frontline the dirty reality was a tumble of blasted concrete, broken homes and shattered lives. 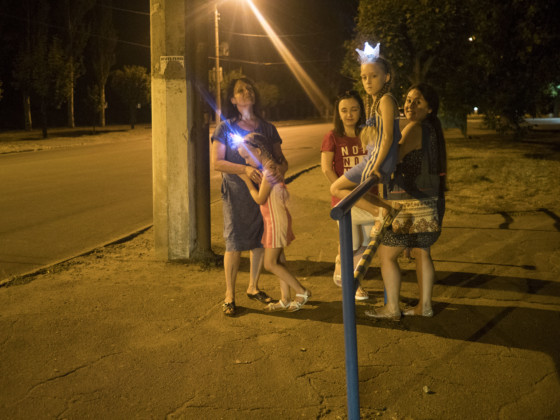 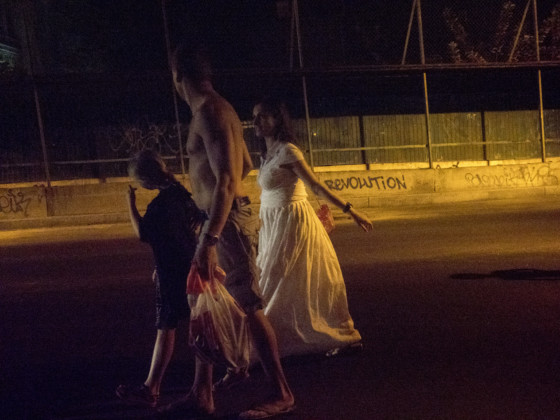 I talked to Tatyana, 52, a machinist at the local factory who lived right on the frontline. One side of her housing block had been destroyed by rebel artillery, but she still eked out a living on the other side.

“There used to be 300 families living in this block,” she said. “But now there are 20. I’ve been living in this building for 20 years. I’m not leaving now. These people are mine.”

If the new war between Moscow and the West is one of bullets and artillery shells, it was also being fought out on the television and radio, and in school classrooms.

Maksim, one of the soldiers on the frontline, said: “We can only get Russian TV here. We can’t get Ukrainian channels. So if I want to know what is happening in my own country I just watch the Russian TV and turn whatever they say upside down. That way I figure I get something close to the truth.”

On a phone-in programme playing on the car radio a listener was complaining: “The past is so unpredictable these days.”

Next: Travelling to Georgia