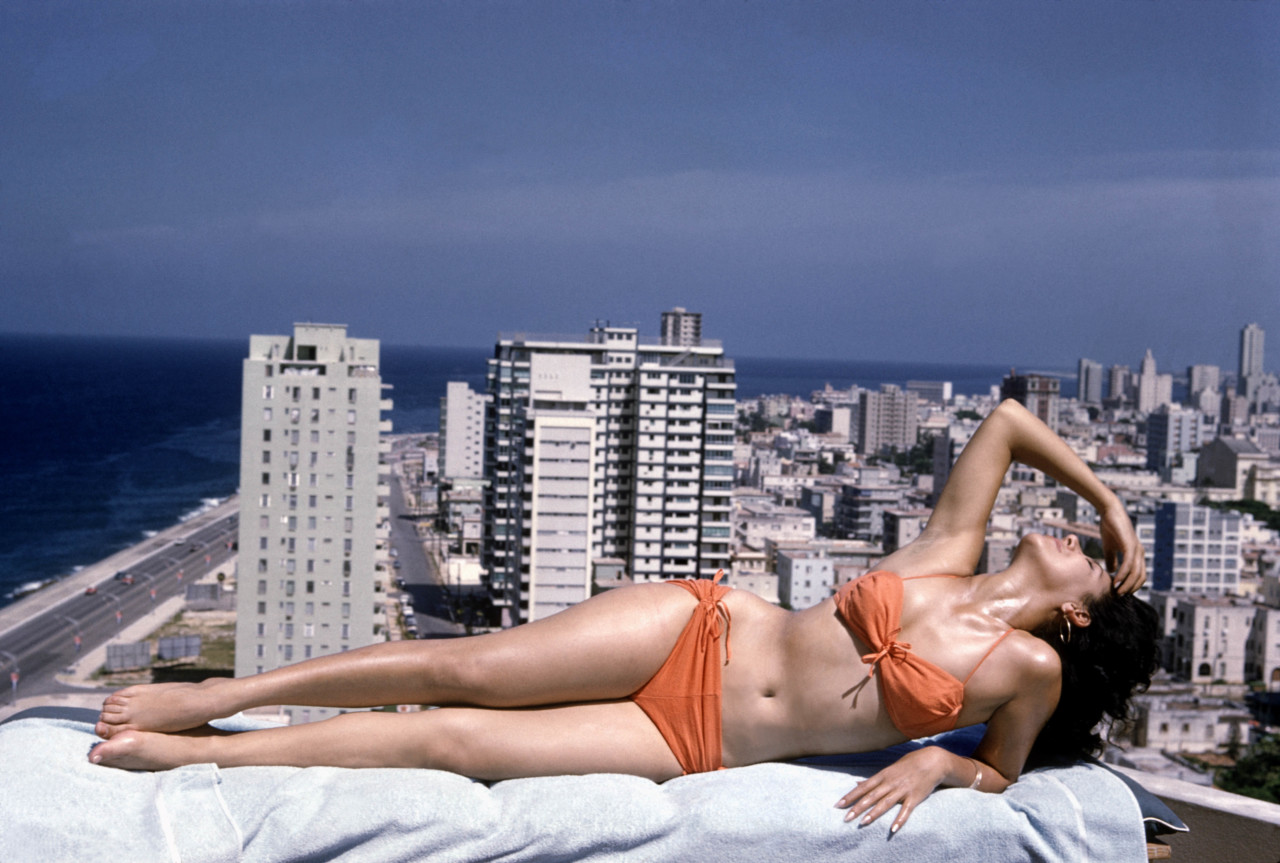 In the same year that the US began nuclear tests in the South Pacific Bikini Atoll, more than 8,000 miles away, what was to become the more well-known claimant of the moniker bikini made its debut: an ‘atom-sized’ swimsuit that would provoke explosive reactions. A flimsy three triangles of fabric connected by string was presented by Frenchman Louis Réard at the popular Parisian swimming pool Piscine Molitor on the July 5th, 1946, during the first war-free summer in France in years. Comprised of no more than 30 square inches of material, Réard’s magnum opus represented a coming together of his trade as an engineer and his vocation, running his mother’s lingerie business.

Photographs by Magnum photographers depict the iconic garment in the early years of the 50s and 60s, capturing some of its proponents who made it famous – such as screen sirens like Marilyn Monroe and Gina Lollobrigida – as well as daring early adopters on the beaches. 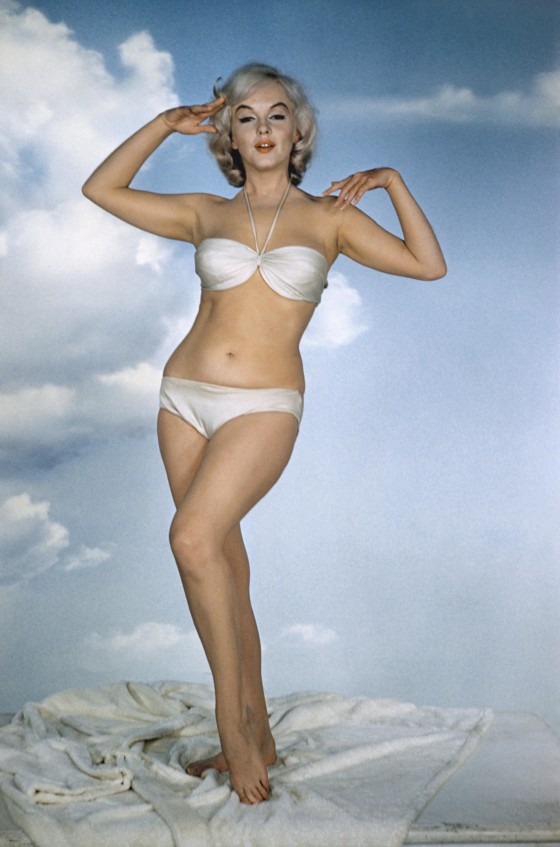 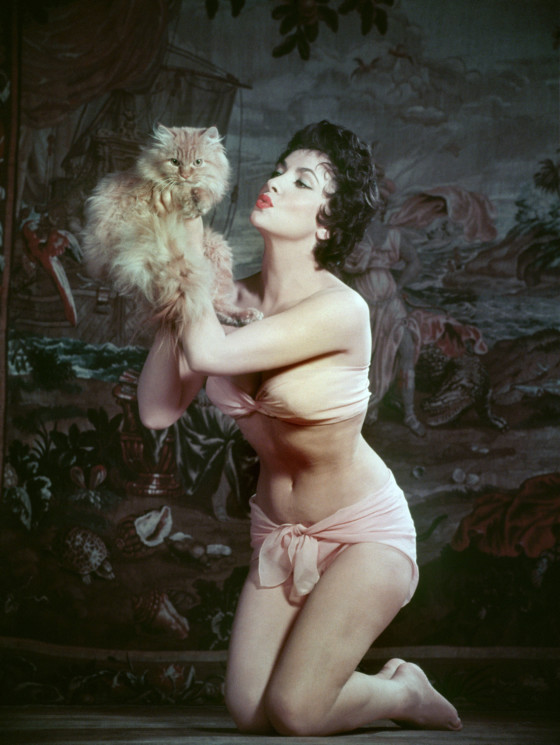 Réard wasn’t exactly the first to design a skimpy two-piece: historically, the bikini can be traced back thousands of years; mosaics dating from 300AD at the Villa Romana del Casale in Sicily depict women doing sports in two-pieces. French couturier Jacques Heim had also recently designed a midriff-revealing set, which he called the ‘Atome’ after the smallest known piece of matter, and advertised it as “The World’s Smallest Swimsuit”. Heim’s design only revealed a slither of midriff. Réard quite literally undercut his rival with bottoms that plunged well below the navel, and gave it the title ‘Bikini’ after the island where America was testing Atom bomb technology, a cheeky and triumphant acknowledgement of him trouncing his rival. Réard said, “Like the [atom] bomb, the bikini is small and devastating.” In later advertisements for the bikini, he’d claim that it wasn’t the genuine article unless it was so small “it could be pulled through a wedding ring”. 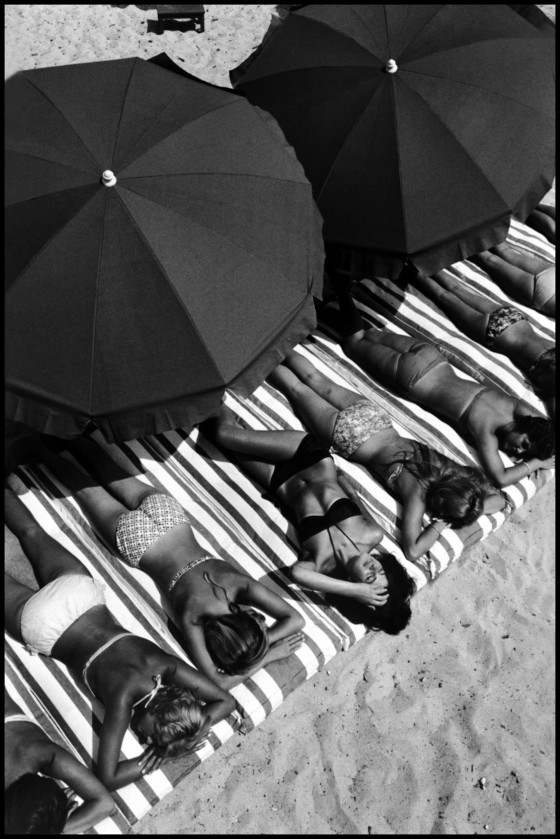 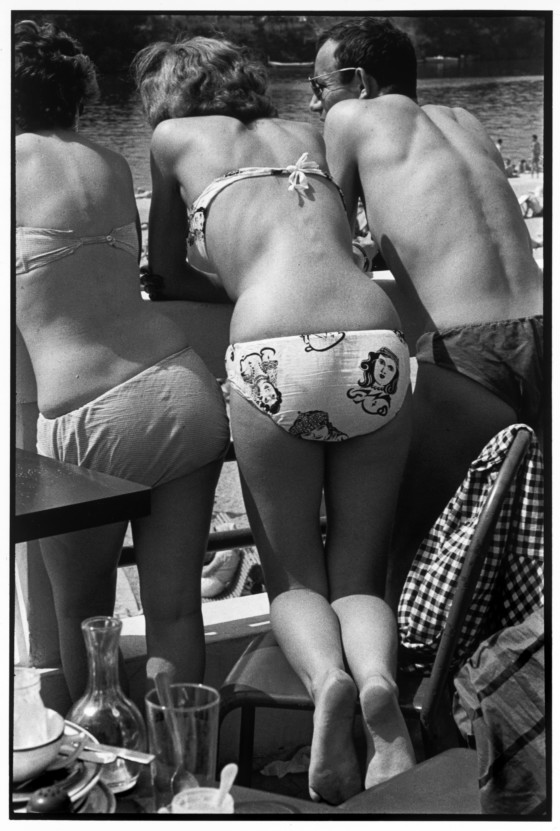 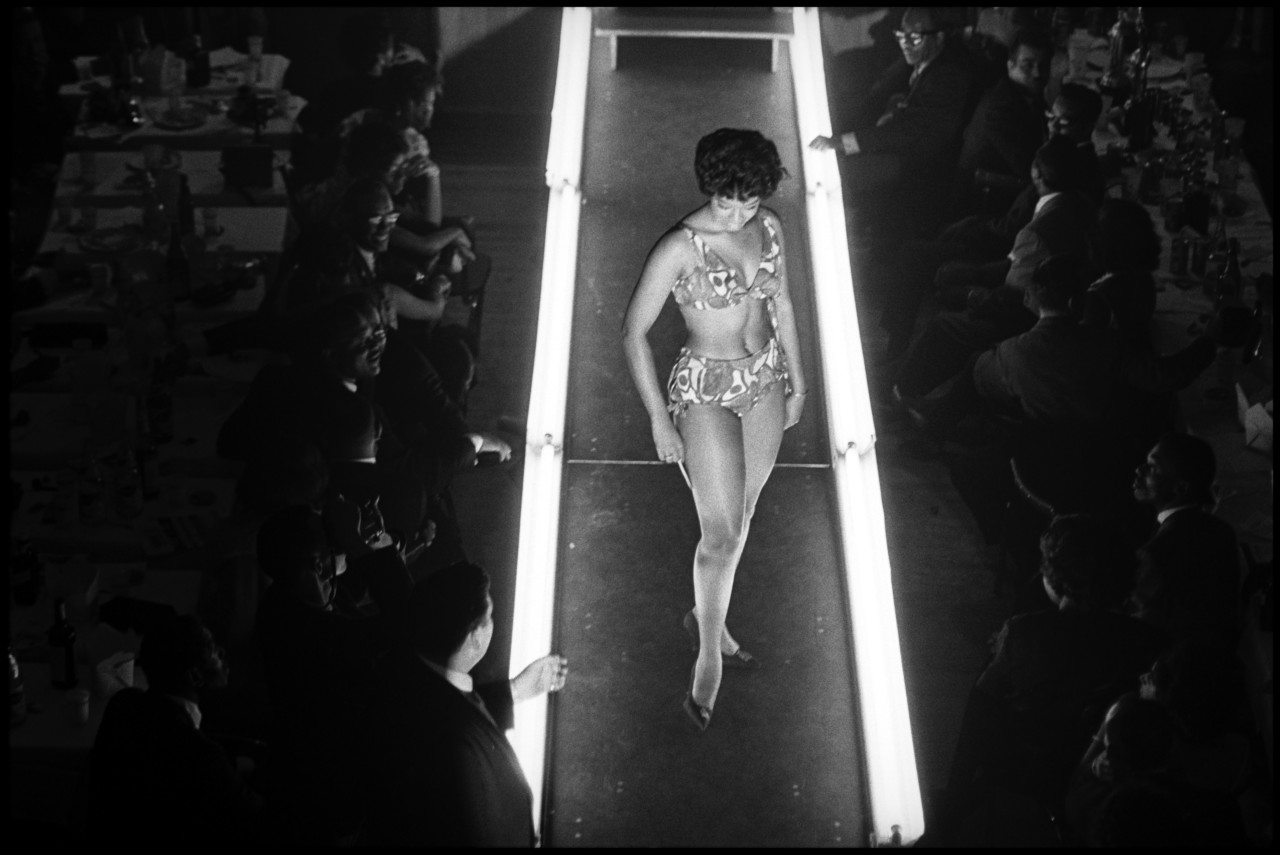 So radical was Réard’s bikini that he struggled to find a professional fashion model to wear it for its debut. The designer eventually hired 19-year-old exotic dancer Micheline Bernardini, who danced nude at the Casino de Paris. The young dancer-cum-model would go on to receive over 50,000 fan letters for stepping up on that fateful July day, incidentally just five days after the atom bomb itself was test dropped in the Bikini Atoll. Bernardini hit the headlines dressed in a newspaper-print patterned bikini, an aptly prophetic choice of pattern that seemed to anticipate the column inches that would be dedicated to this small but explosive garment in the decades that followed. Celebrated fashion writer Diana Vreeland described the bikini as the “atom bomb of fashion”. 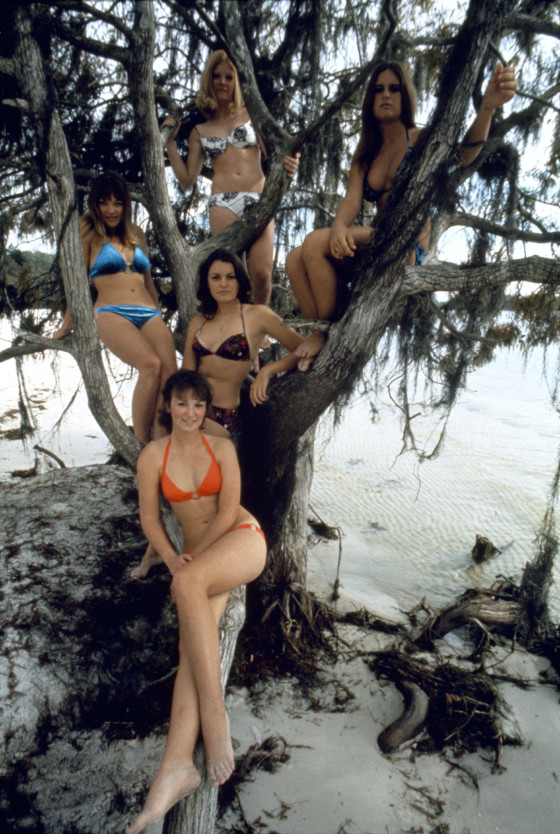 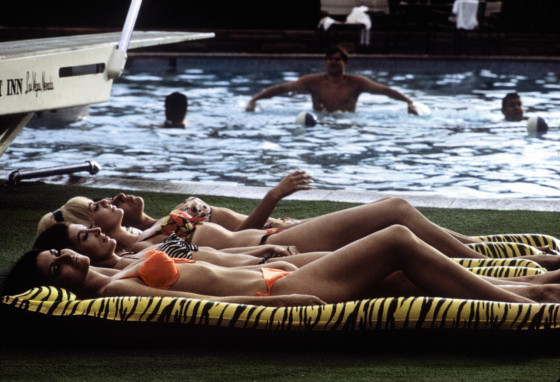 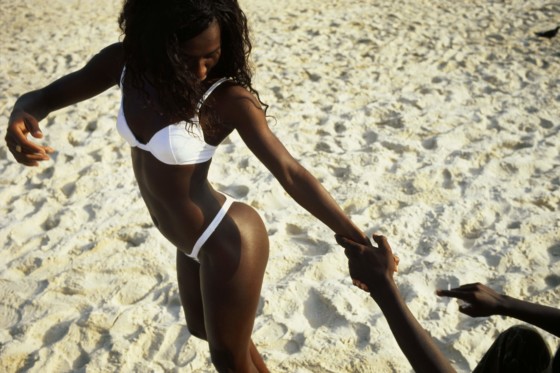 Initially popular with glamorous, sun-worshiping French women on the laid-back beaches of southern France, and made iconic by the likes of smouldering film star Brigitte Bardot, who famously posed in a bikini at Cannes, the bikini spent its formative years scandalising the world. American swimsuit designer Anne Cole’s 1959 remarks that the bikini was “at the razor’s edge of decency” summarised the frosty sentiment outside of the permissive Côte d’Azur. Spain, Italy, Portugal and Australia banned the bikini in these early years, while in the United States, the deeply conservative National Legion of Decency – a Roman Catholic body moderating American Media content – acted as a lobby group to pressure film production companies into keeping bikinis from being featured in Hollywood movies. A 1954 issue of American Vogue featured a bikini styled with a jacket, suggesting the ensemble as a “way of looking dressed, not undressed.” Several years later, a 1957 issue of the American Modern Girl Magazine balked, “It is hardly necessary to waste words over the so-called bikini, since it is inconceivable that any girl with tact and decency would ever wear such a thing.” 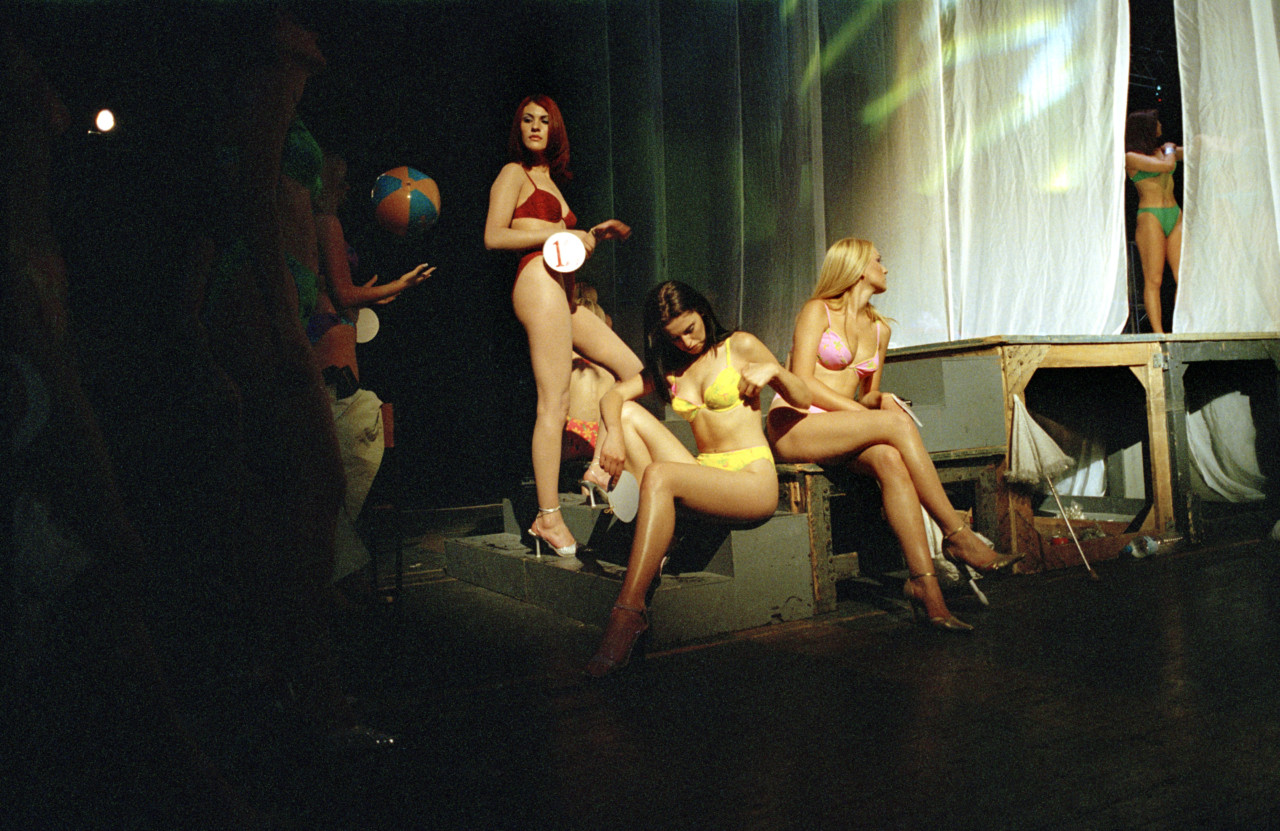 Women’s liberation: a symptom but not a cause

Comments by the likes of the above from a scandalised Modern Girl magazine may sound laughably prudish in 2016, but it’s an insightful reminder of how expectations of how women should behave have developed in the last half-century. These days, for many enlightened by feminism, the bikini is representative of the exploitation of women’s bodies, the uniform of women packaged for the male gaze, seen on glamour models in men’s mags, on promo girls selling cars; a device to pressure women into conforming to an ideal, requiring waxes, tans, diets and so on in order to get a ‘bikini body’.

However, the ubiquity of the bikini in contemporary culture represents the marked shift away from the pre-1950s expectations of women to be modest, as per the sentiment of Modern Girl’s hysterical comment. According to French fashion historian Olivier Saillard,”The emancipation of swimwear has always been linked to the emancipation of women.” If not a part of the sexual revolution, its adoption was certainly a barometer of the weather change in the social landscape – a symptom if not a cause. 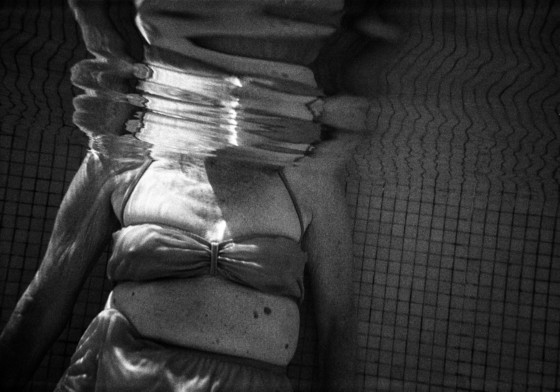 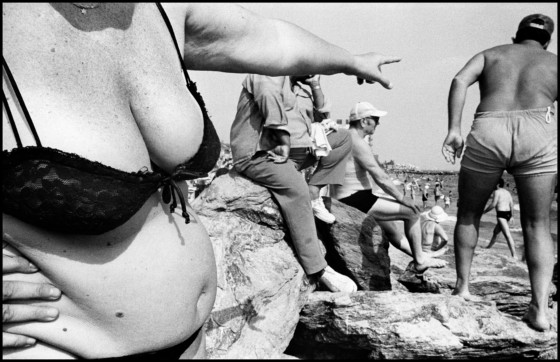