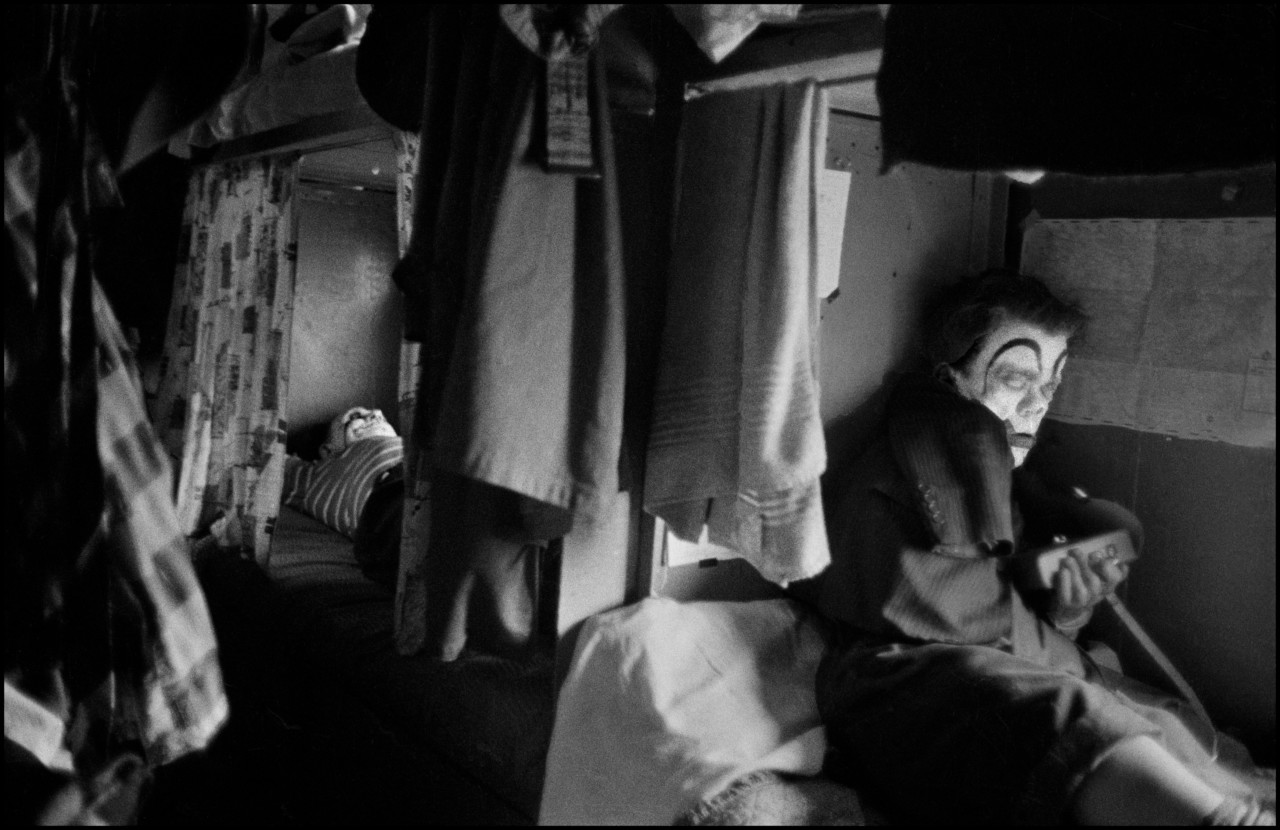 Bruce Davidson was 24 when he visited the Clyde Beatty Circus. In 1958, combined with the Cole Brothers and Hamid-Morton, the circus raised a gargantuan three-ring tent at the Palisades Amusement Park in New Jersey. One spring morning Davidson headed off there at the suggestion of Sam Holmes, who was in charge of the picture library at Magnum at the time. The photographs he began to take that day would go on to form the first part of one of his most seminal bodies of work: Circus, a black-and-white visual chronicle of mid-century big tops in America as the cultural phenomenon was beginning to die out. 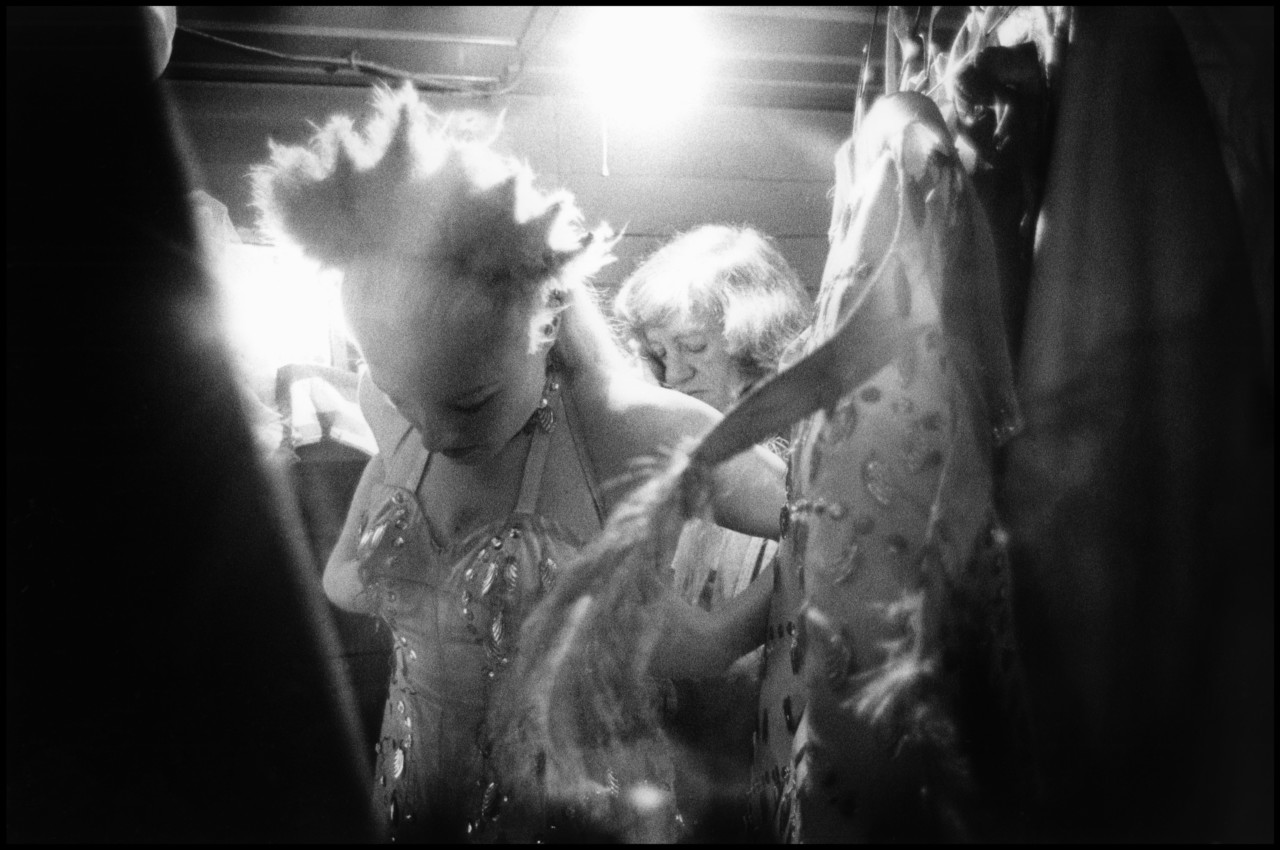 Davidson had been mentored by Henri Cartier-Bresson and already photographed 14 assignments for Magnum before this project began. By this point, Holmes writes, “he was eager for a subject to which he could respond personally and emotionally.” He had no press accreditation when he turned up that day but, “he had an unassuming manner which won him acceptance.” Meandering into the ‘back yard’ area – where performers lived out of trailers and spent their time when not performing ­– Davidson was immediately taken with the quiet ordinariness of the scene before of him: performers hanging out their laundry, eating, applying makeup and waiting for their cues. Whilst he would spend the weeks to come documenting some of the most famous figures in American circus culture, it was these everyday moments he felt truly drawn to. 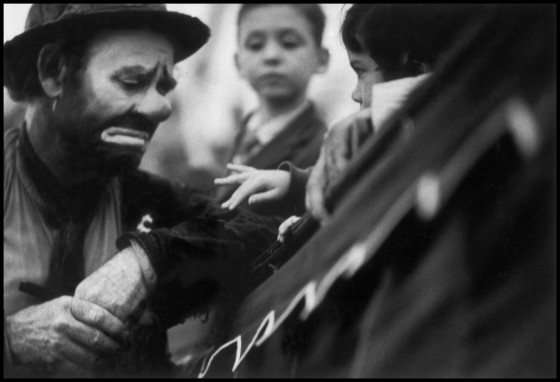 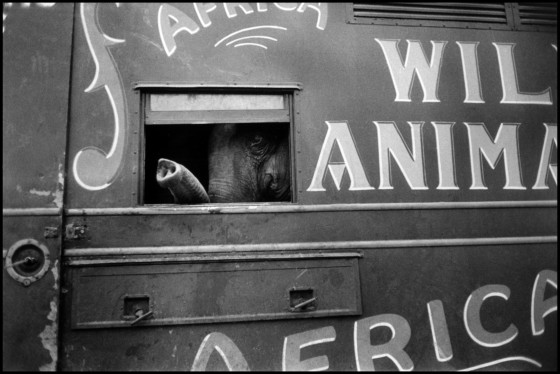 The second instalment of Circus saw Davidson photograph the Ringling Brothers and Barnum and Bailey Circus when it played at an indoor arena in North Carolina in 1965. Here he took an altogether more distant stance as he cast a critical eye over the rising success of coliseum shows. With less emotional proximity, many of the photographs show performers swallowed by their steel environment. In the final instalment in 1967 he documented an Irish one-ring circus. Here he had some of the roustabouts help him climb to the top of the tent structure so he could photograph the spectacle from high above. There are a number of recurring characters featured in Circus: the elephants and a young girl who rode them into the ring; Hugo Zacchini the “canon man”; and Emmett Kelly, one of the most famous American clowns of the 20th Century. But none had a more profound effect on Davidson than Jimmy Armstrong, a dwarf clown from the Clyde Beatty circus. 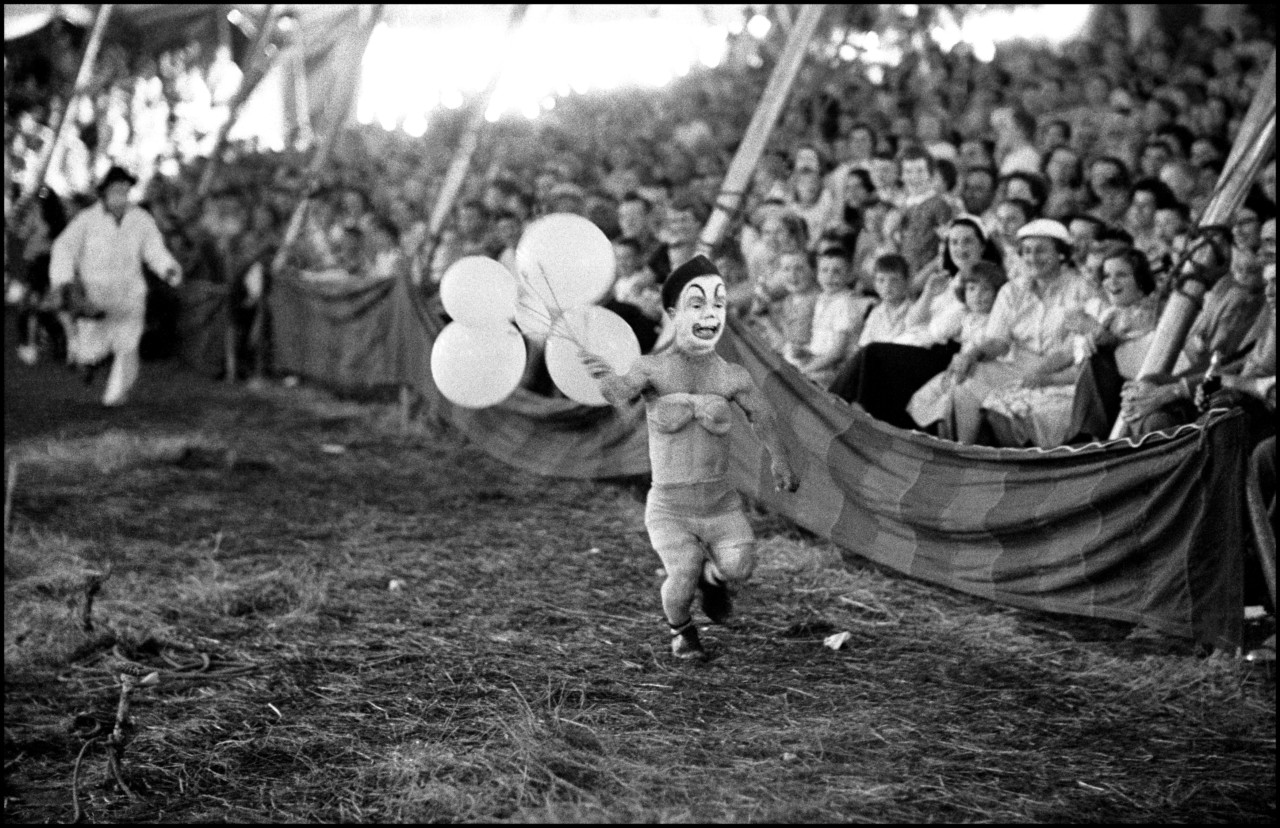 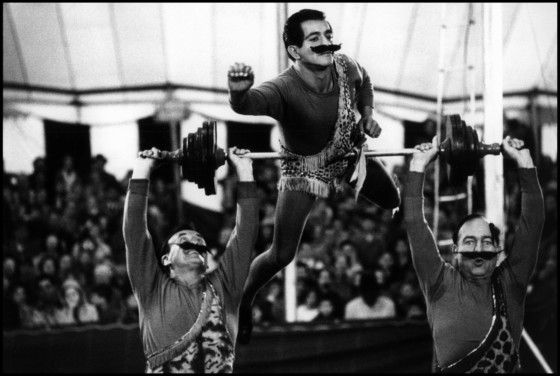 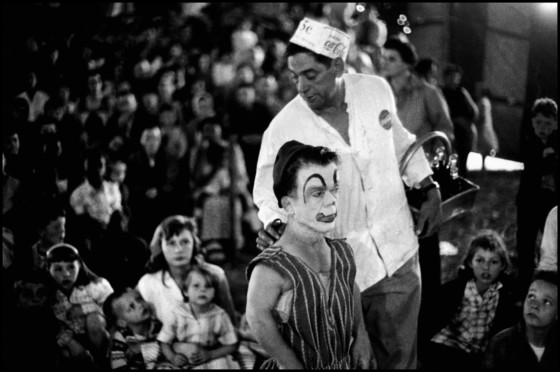 “He was standing alone outside the tent smoking a cigarette,” when Davidson first saw him. Dressed in a tux and a top hat he held a small bouquet of paper flowers, and “stood there pensively in the privacy of his inner thoughts”. Davidson approached him and began taking pictures. Right from the off, he says, “he seemed to know that it was the inner moment I was drawn to and not his clown face or physical appearance.” Jimmy became Davidson’s way in, letting him into his private world and acting as his guide to circus life. “We became friends, although we seldom spoke to one another,” Davidson remembers. Theirs was a bond of unspoken understanding – a contentment to be in each others company that didn’t need excessive words. 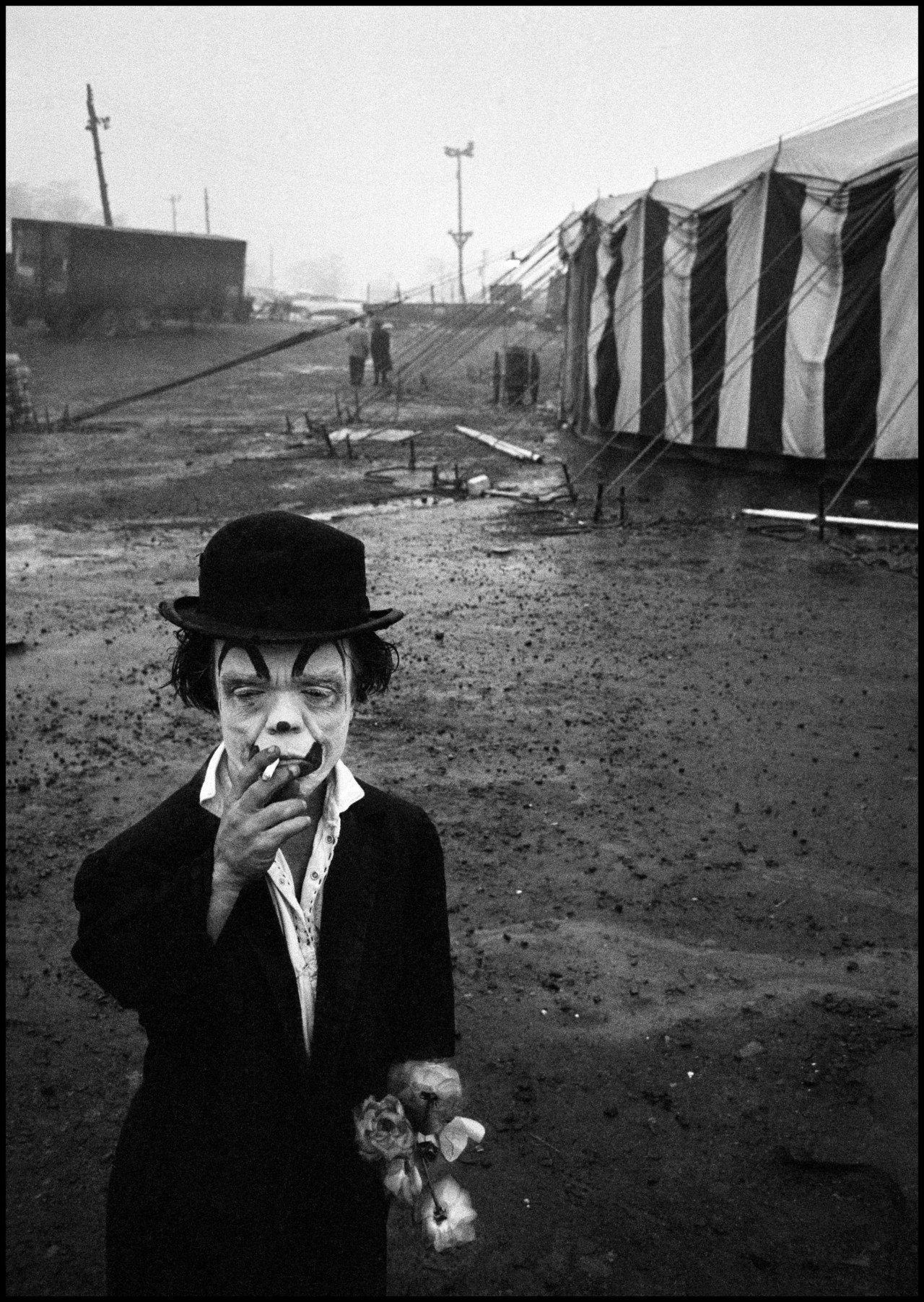 In many of Davidson’s photographs of Jimmy we see him alone, applying his makeup, smoking a cigarette or waiting to go into the ring, with that sad clown face painted upon his own. Sometimes he is almost lost within the frame in the very corner of a photograph, but in others he fills it entirely, his gaze directed straight into the lens. In some pictures, we see him interacting with his audience and laughing with children. There are painful moments too; in one photograph, he eats a sandwich alone at a diner, as a group of men look on from another table. In another, he walks ahead as a group of teenagers laugh along behind him. These are the uncomfortable realities of the ‘freak show’ status Jimmy was forced to endure, and it’s important they are shown. Holmes says the pictures emit a loneliness that speaks of “an isolation implicit in the fact of his being a dwarf, and hence always to some degree an outsider.” But Jimmy had acceptance here, a family here, and earned a wage to live a life for himself here, and Davidson wanted all of that experience to transcend the photographs too. 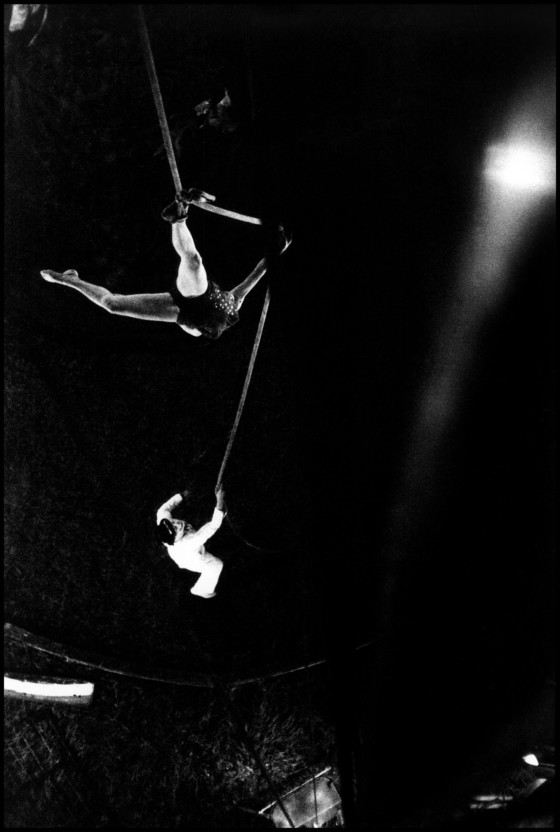 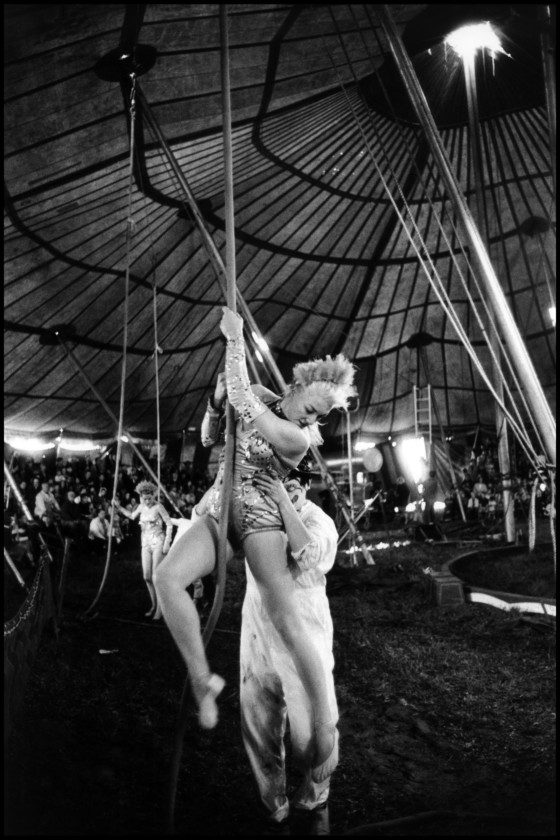 After he toured with the Clyde Beatty circus for a few weeks, Davidson found the process of parting ways difficult. “It’s easier to get inside a world than it is to leave it”, he once said. For a time, Jimmy would send him his route card stating the towns that the circus was going to visit and they’d be in touch, but in the end they lost track of one another. Davidson doesn’t think there are any photographs he regrets not taking, but he does have one retrospective wish. “I gave Jimmy my Yashica 6×6 as a present when I left. If anything, I’ve always wondered what photographs he took on it and would love to see those.” Circus, for all its subjects and its almost decade-long span, continues to resonate most powerfully as an intimate portrait of Jimmy. 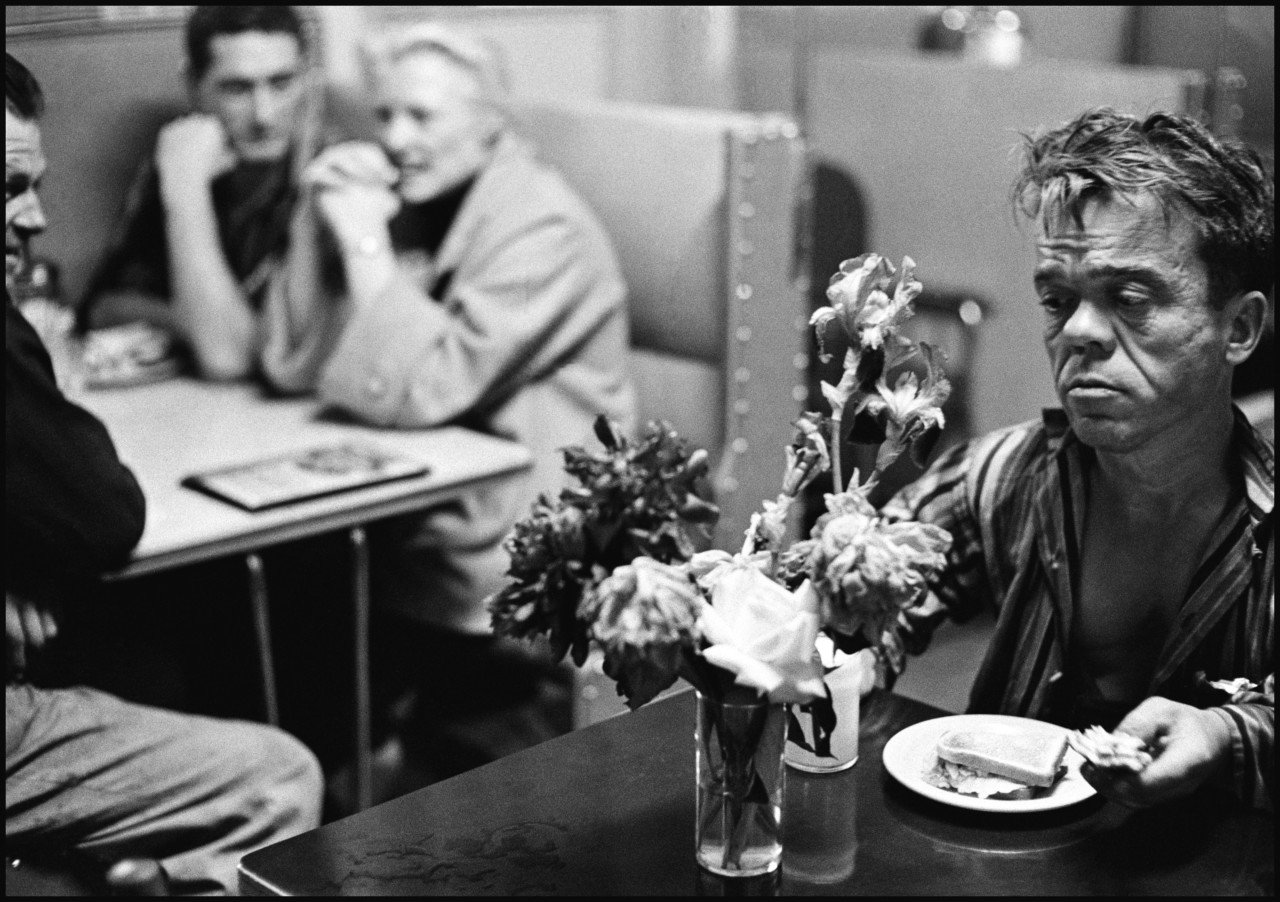 "I found something in Jimmy that was more than loneliness, it was a story about surviving"

Davidson’s most valuable asset as a photographer may be his unfaltering sentimentality, which has allowed him to continue moving into circles of outsiders and gaining their trust over the years. There’s a slowness and a sensitivity he learned during those early days that informed everything he did from then on. “I stand to the side respectfully until I am invited in,” he says now. “There is a lot of patience and stillness in the making of a photograph.” The year after the Clyde Beatty circus, he photographed a gang of teenagers in New York for his project Brooklyn Gang, and in 1961 he joined a group of Freedom Riders on the road to Mississippi via bus. As he immersed himself within these other outsider communities, that early loneliness he felt in Jimmy pervaded almost everything. No matter the subject, he said, “I was attached to the loneliness of it all. I think we cover up our loneliness with lipstick and a brand new car. I’m not trying to do that in my work. Somehow, loneliness reaches me.” Pulled in emotionally by his subjects, what Circus really taught him was the value of human connection. 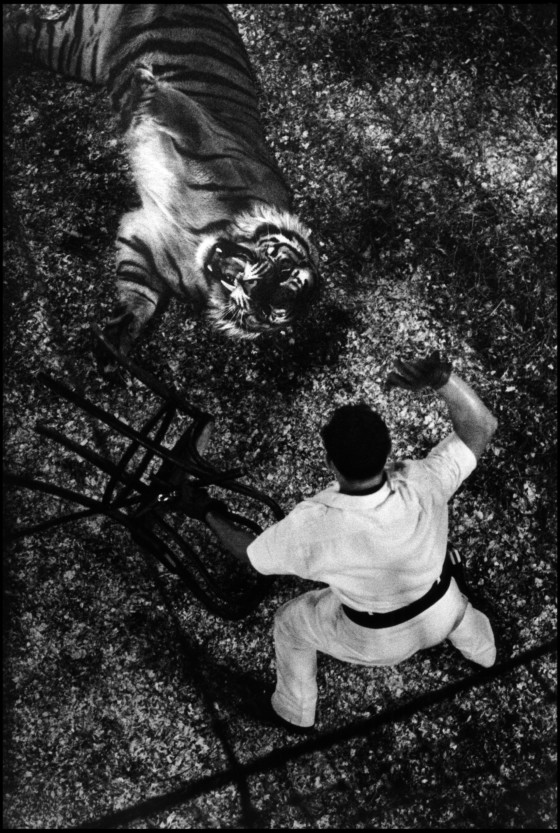 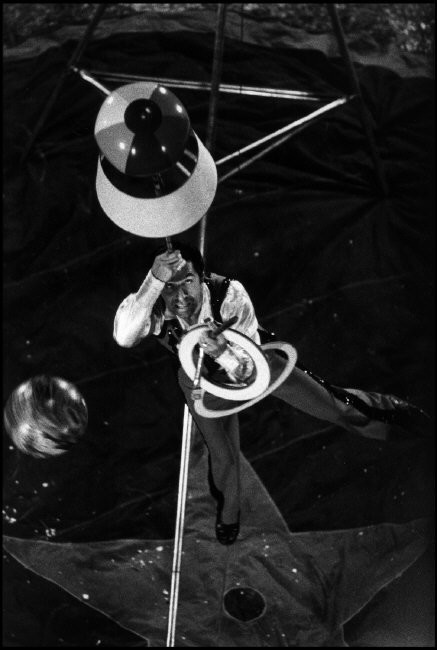 Recalling the wider social and political climate at the time he began making Circus, Davidson acknowledges the devastating knock-on effects to those in the travelling circus world. In the USA that year, the Microchip was developed, the first solar-powered satellite was launched and NASA was established. The world was moving forward, and there were other spectacles consuming attention. “Tent shows were dying out and being replaced by television and coliseums”, he remembers. “People could sit in their living room and watch the circus on TV so that killed some of the smaller ones.” That tingling sadness of time passing continues to be felt in these photographs, and in all senses Circus is a document of social change. 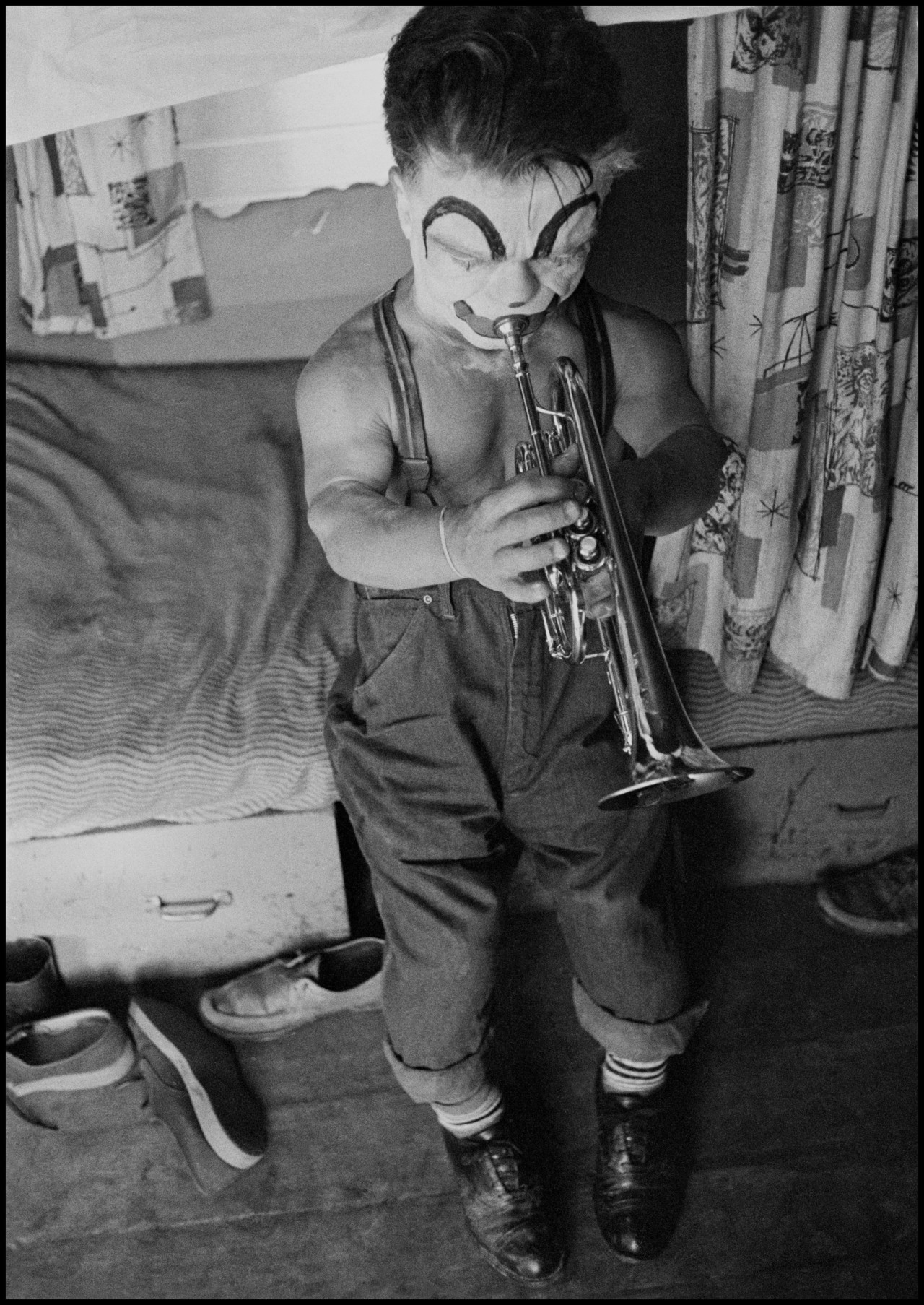 "He was a giant in my eyes"

There is a short story written in 1955 by Ray Bradbury called The Dwarf, in which the main character, a man with dwarfism named Mr. Bigelow, works for a carnival. Each evening after the crowds have cleared out, Mr. Bigelow visits the Mirror Maze where he goes directly to a mirror that magnifies his image many times over and dances and poses before it with glee. The quiet solitude Mr. Bigelow projects is profoundly similar to that of Jimmy in Davidson’s pictures. Reflecting back on it now, Davidson says, “I found something in Jimmy that was more than loneliness, it was a story about surviving.” Bradbury writes Mr. Bigelow as a man with, “a soul as big as all outdoors”, while in his dedication to Jimmy at the beginning of his book, Davidson writes, “he was a giant in my eyes.”

In each case, there is a dignified humanity that surpasses bodily stigma.  Embedding himself within the milieu of the circus, Davidson found friendship, and nurtured long term relationships through his camera with sensitivity and love. Taking pictures has always been, Davidson says, “a way of experiencing life and understanding myself in terms of the world.” In other words, to photograph people is to find something of himself staring back. After all, photography is a sort of mirror too. 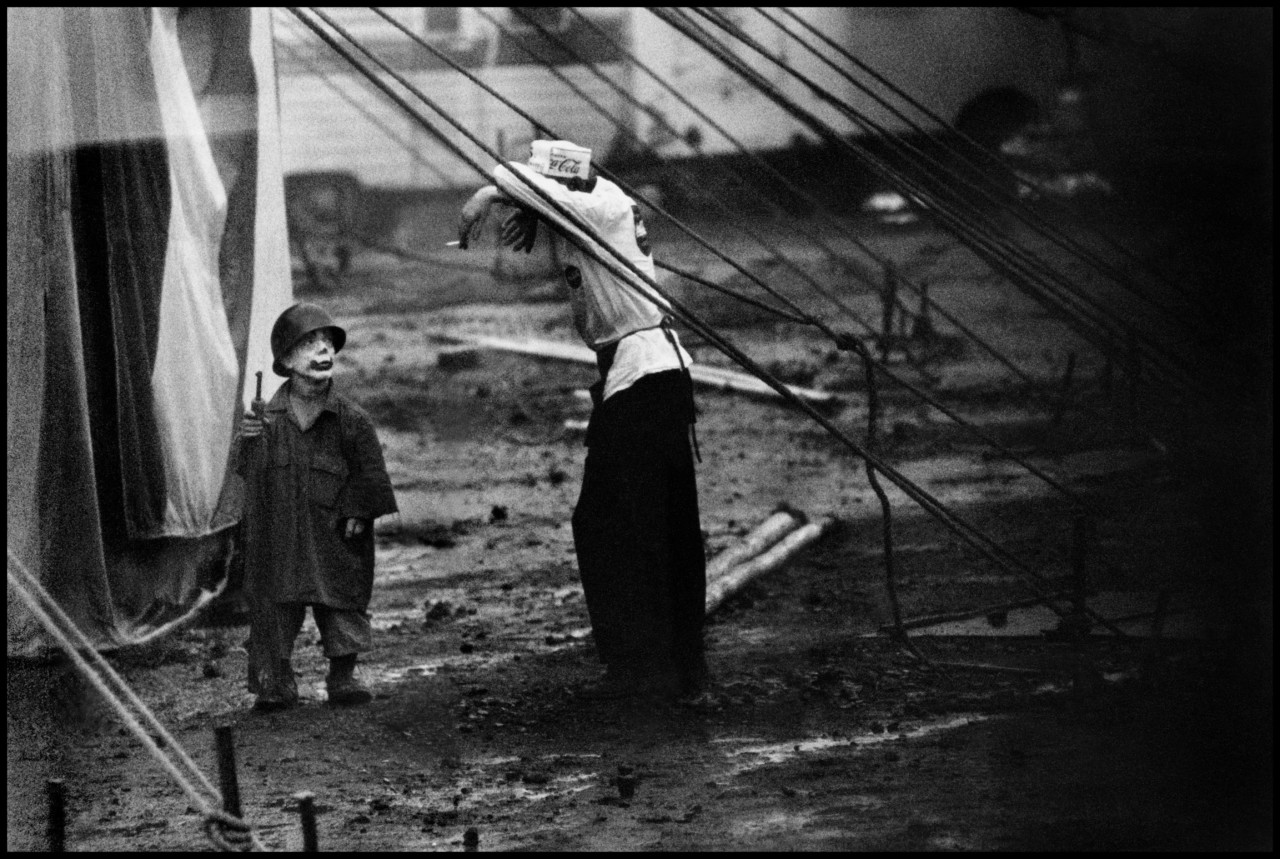