Eve Arnold and Raymond Depardon photographed the making of the cinematic adaptation of John Fowles’ bestselling novel The Magus, a surreal and sensual tale of trickery, shot on location in Mallorca in 1967 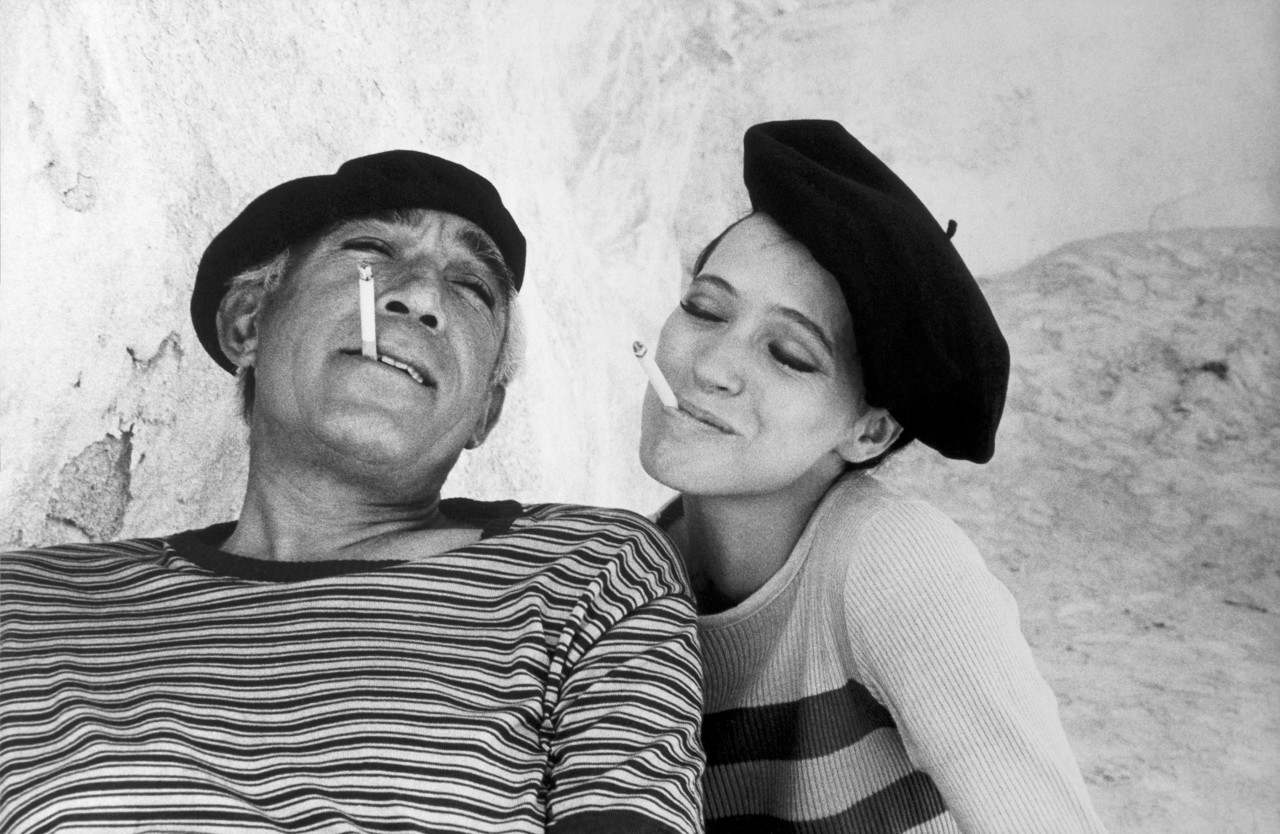 Here, we look at Eve Arnold and Raymond Depardon’s coverage of the making of ‘The Magus’, a sun-soaked mystery directed by Guy Green and starring some of the biggest stars of the time, from Anthony Quinn and Michael Caine to Anna Karina. A resounding flop upon its initial release, it has since been reappraised as a sublimely shot symbol of the psychedelic 1960s. 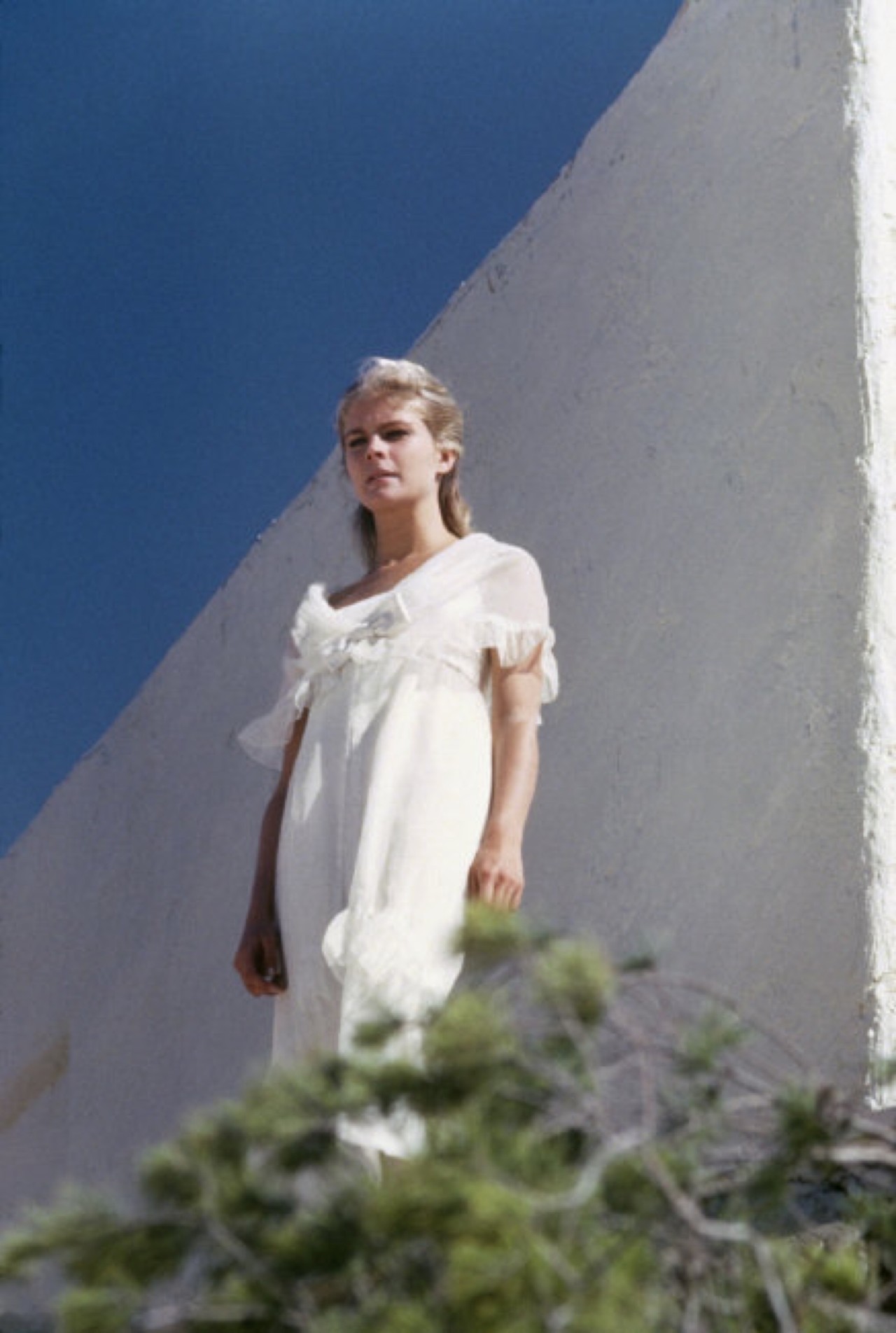 In the summer of 1967, shooting began on the film adaptation of British author John Fowles’ second novel, The Magus, directed by Guy Green and featuring a stellar cast including Anthony Quinn, Michael Caine, Anna Karina and the American actress and model Candice Bergen. Most of the filming was meant to take place on location in Greece, the book’s principal setting, but political unrest meant that the production had to relocate to the lush Spanish island of Mallorca. There, the cast and crew were joined by the lauded American photographer Eve Arnold, a regular frequenter of film sets, and the young French image-maker Raymond Depardon, then at the very start of his esteemed career as both a photographer and filmmaker, who were invited to document the much-anticipated movie in the making.

‘The Magus’, it was believed, would be a huge success. Not only was the 1965 novel – a beguiling postmodern mystery, set on the fictional Greek island of Phraxos – beloved by readers, but the film version of Fowles’ debut novel The Collector, also released in 1965, had been a multi-Oscar-nominated smash hit. Michael Caine was such a fan of The Collector that he signed up for ‘The Magus’ without knowing anything about it. “I knew I wanted to do John Fowles’ next novel… before he had even written it,” the inimitable British actor said in an interview with Films and Filming in 1969. “[The producers at Twentieth Century Fox] had the option on it, and I said, ‘I’ll do that no matter what it is.’” Guy Green was equally keen to jump aboard the project. “One seldom gets offered anything that one is really fascinated in,” the English director told the same publication. Fowles, meanwhile, demanded to write the screenplay himself, allegedly galled by his lack of involvement in The Collector’s adaptation.

The Magus and The Collector are totally different beasts: where Fowles’ first book is the claustrophobic story of a mentally unhinged young man who kidnaps a female art student and keeps her locked away in his rural English farmhouse, his second is all sea, sunshine and dusty white rocks – as Arnold and Depardon’s dreamy photographs attest – while the plot is a far more surreal affair. 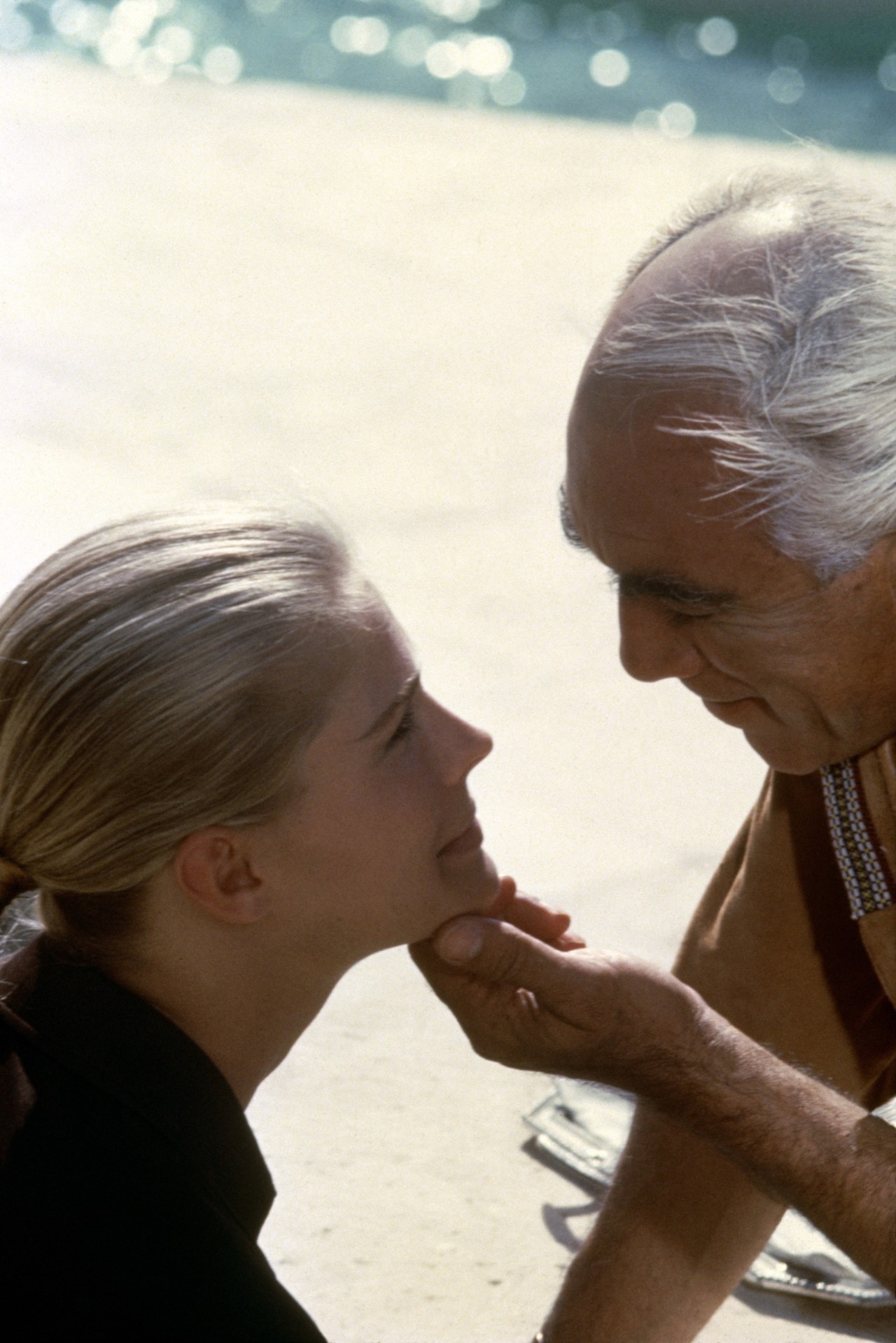 "The film is a Technicolour feast for the eyes, not only because of the stunning scenery and photogenic cast, but also thanks to the ornate set and costume design that bring Conchis’ wildly theatrical world to life" 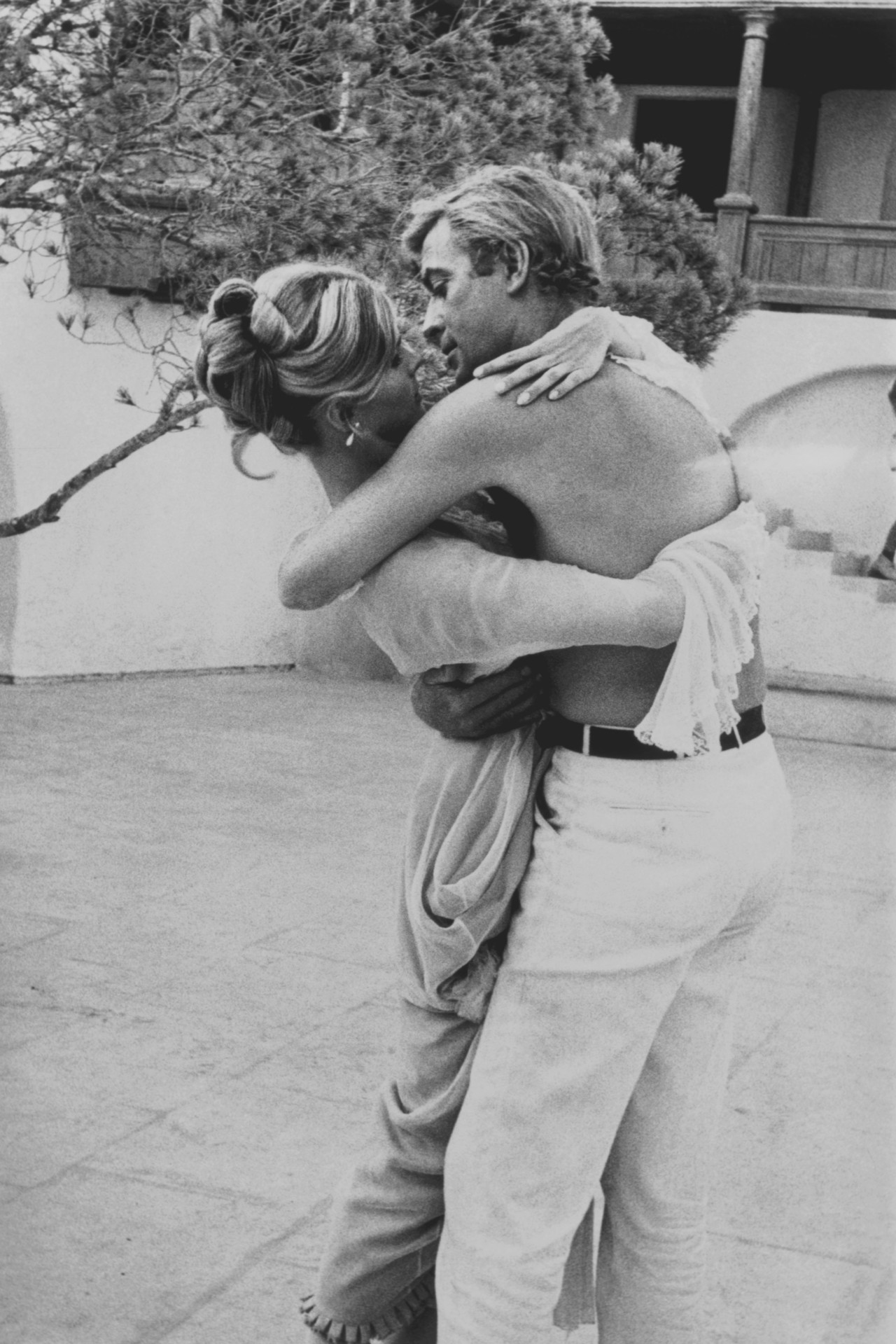 It centres on a young Oxford graduate named Nicholas Urfe (played by a tousled, often topless Caine) who arrives on Phraxus to replace a recently deceased English teacher at an all boys school. While wandering the island one day, he stumbles across the estate of the mysterious Maurice Conchis (Quinn), a master trickster of multiple personas, determined to embroil Nicholas in his confounding psychological “godgame”. At first, the bored leading man is enthralled by the promise of adventure, but enthusiasm soon gives way to concern as he finds his grip on reality slackening with every visit to Conchis’ home.

The film is a Technicolour feast for the eyes, not only because of the stunning scenery and photogenic cast, but also thanks to the ornate set and costume design that bring Conchis’ wildly theatrical world to life. Interestingly, however, Depardon opted to capture all his on-set images in a pared-back monochrome palette, while Arnold switched between black-and-white and colour, offering more of a feel for the film’s sundrenched setting. 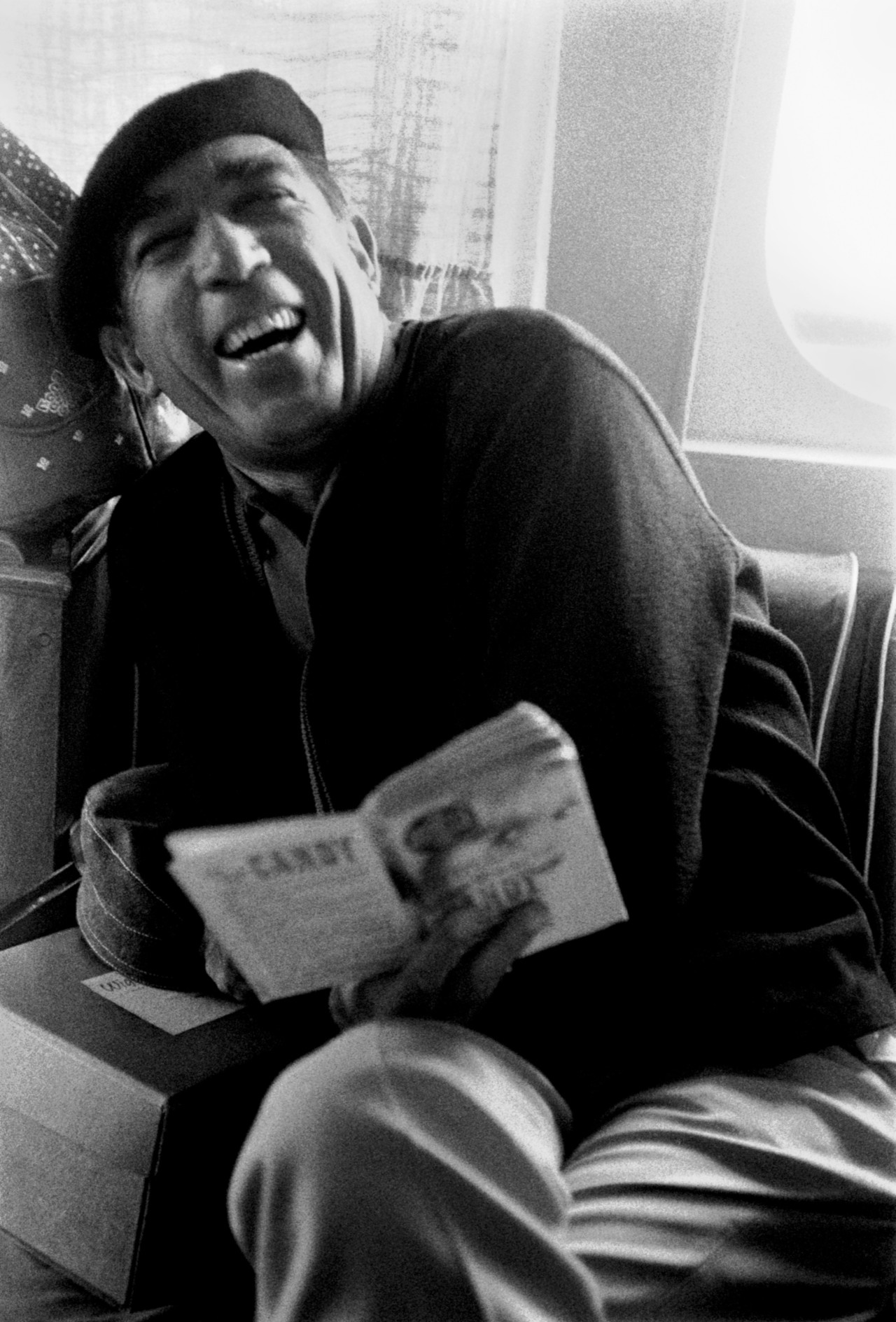 "Both photographers shied away from documenting the more visually elaborate elements of the production, instead homing in on the actors, both at work and play." 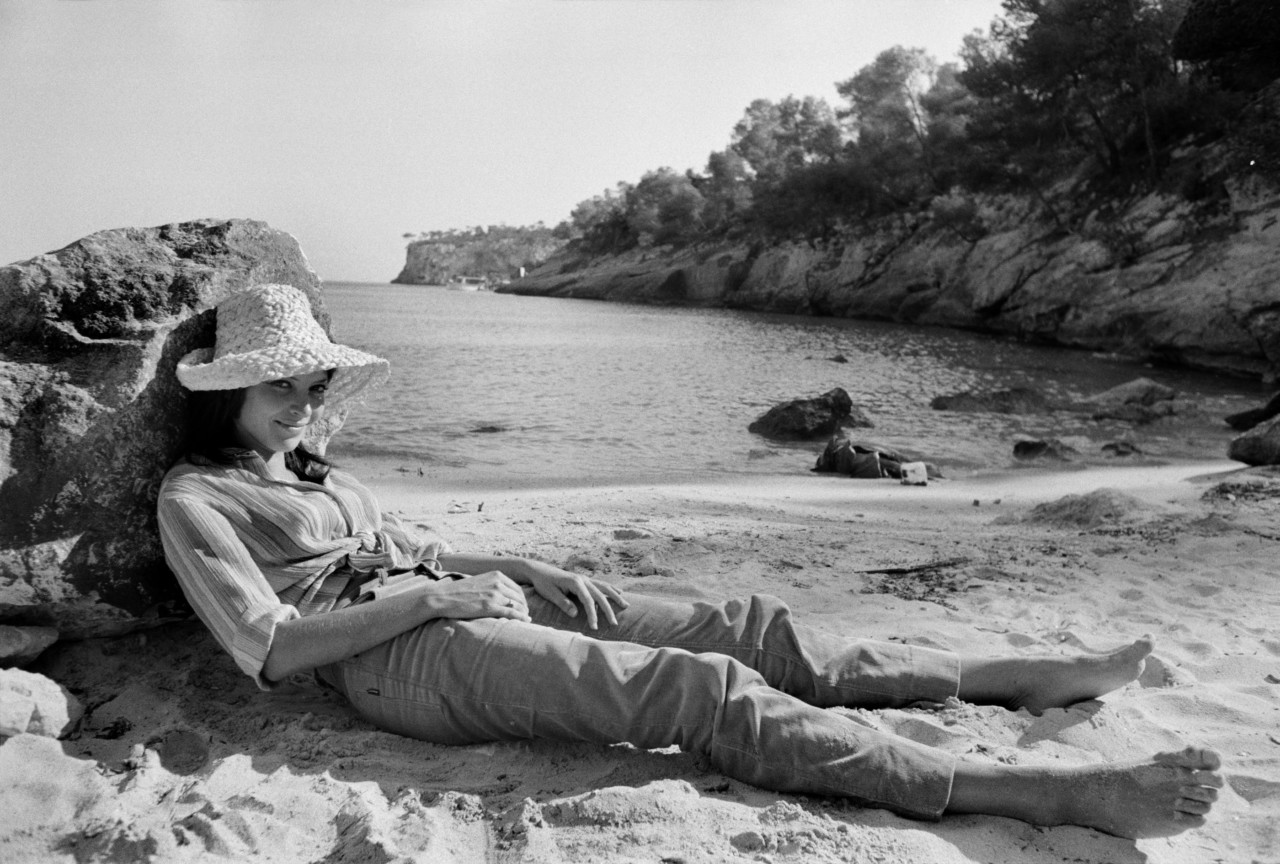 Both photographers shied away from documenting the more visually elaborate elements of the production, instead homing in on the actors, both at work and play. Depardon – widely celebrated for his compassionate documentation of human behaviour – took a series of wonderfully intimate and spontaneous behind-the-scenes shots that convey his skill as an unobtrusive observer. Anna Karina (who plays Nicholas’ spurned French lover) frolics unselfconsciously before his lens in all her impish charm, while elsewhere the film’s young protagonists chat to one another with animated enthusiasm, entirely natural in Depardon’s presence.

Arnold, ever the master portraitist, took such artfully composed photographs that they could easily be mistaken for stills from an entirely different film – and a remarkably stylish one at that. Quinn and Karina, in berets and striped tops, cigarettes balanced between their lips, could be mistaken for an aging Picasso and one of his young lovers; Karina and Bergen (who takes on the role of the dazed damsel residing in Conchis’ home) peep through a hole in a white wall, their penetrating gazes perfectly framed; Caine and Bergen perform a seductive tango, entirely enthralled by each other. The dynamic between ‘The Magus’ ensemble was evidently as warm as the Spanish summer. "Fifty-three years on many film lovers deem 'The Magus' a cult classic for its psychedelic embodiment of its era, its glorious cinematography, and the coming together of some of the period’s most iconic actors" 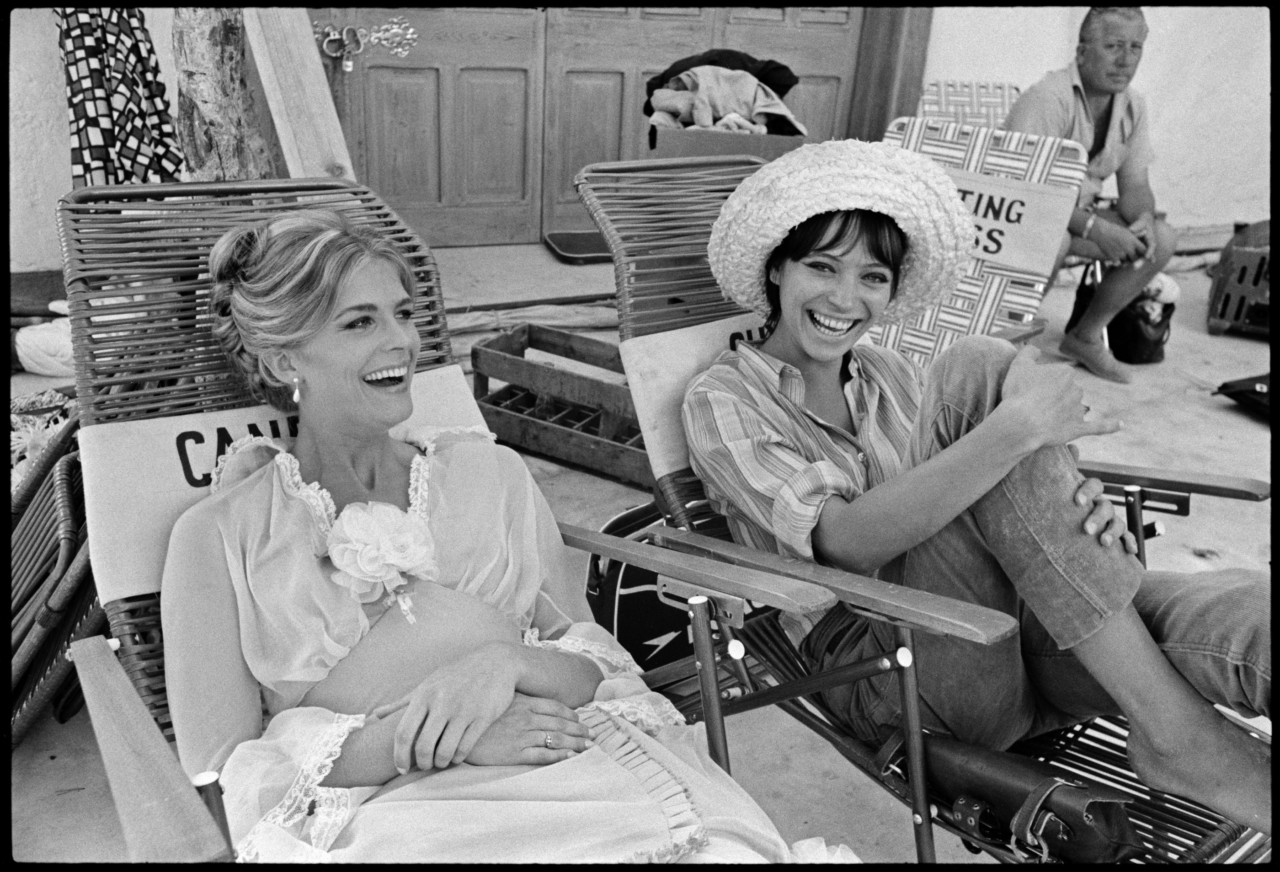 In spite of this, and the magical story at its heart, the film was a financial disaster as well as being widely lambasted by the critics. Woody Allen famously said that if given the chance to live his life again, he’d do “everything exactly the same, with the exception of watching ‘The Magus’,” while Caine himself has said it’s one of the worst films he’s ever made – not because of how the film turned out, per se, but because so many audience members declared themselves utterly baffled by the plot.

Fifty-three years on, however, and many film lovers deem ‘The Magus’ a cult classic for its psychedelic embodiment of its era, its glorious cinematography, and the coming together of some of the period’s most iconic actors – an historic moment immortalised by two similarly seminal image-makers.