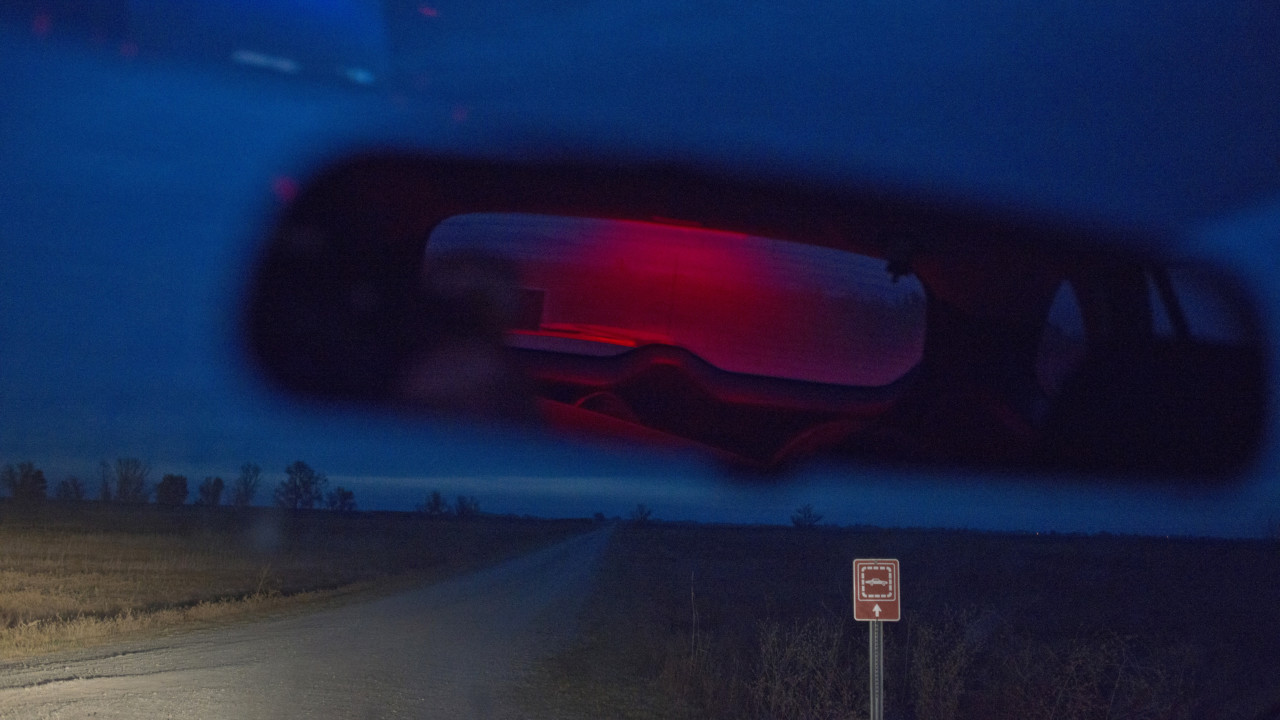 In summer, 2018, Samsung invited a group of Magnum photographers to curate a collection of seven images each, in response to a brief encouraging them to search for fine art in the every day. David Alan Harvey, Jonas Bendiksen, Carolyn Drake, and Alex Webb each found their own ways to approach the task within the parameters of their wider photographic practices. From Drake’s harnessing of the effects of jet lag to focus her eye anew upon the well-known, to Harvey’s seeking moments of beauty in the transient, shifting sands of his coastal home, each found art in the familiar. Webb used the project to extend his ongoing documentation of American cities to Chicago, approaching the setting with his characteristic lack of preconceptions, while Bendiksen turned his eye upon the bountiful natural beauty of the terrain in which his home is set.

The 28 images, which the respective photographers have published via their Instagram accounts over consecutive weeks, will be available for display on the Samsung Frame TV, which, in its ‘Art Mode’, functions as a digital picture frame. These images will be added to the more than 850 renowned works of art already held in the Samsung Art Store’s repository. Here, see the 28 photographs alongside two short films on the project. David Alan Harvey This house was originally built on land, but is now out over the Pamlico Sound simply because of storm erosion. All houses in the Outer Banks are in danger from both hurricanes and northeaster stor (...)
ms. USA. © David Alan Harvey | Magnum Photos

I now live in Nags Head, NC, very close to where I grew up in Norfolk, Va., only about 90 miles from here. The smells and sounds of the beach are the same here as they were when I grew up. I am sure there are better places to grow up, and to live, but this is where I want to be. Most people gravitate toward their original home if it makes any sense at all. People get tied to the land – I am tied to the sea, the woods, and the dunes around here.

There’s a duality in photography which has always struck me. The idea that one photograph could be a document, a record, which has a journalistic value and that image could also be fine art, hanging on the walls of a national gallery. Recently, the area I live in and those photos capturing moments within that area, are my focus. The everyday is where I see these moments. I really didn’t view this assignment as a separate project, it was more a tangential experience for me. My interest at present is capturing the little moments of everyday life and beauty around here, in this area.

Importantly, places like this are not now where they will be in 100 years. All of my work here, on this coast, exists under the umbrella of the fact that the whole damn place is being washed away. All of these barrier islands on the East Coast of the US – Manhattan being one of them – are supposed to move around. They would move anyway, even without global warming. It’s an environmental issue, both natural and manmade – the individual pictures don’t show that. They may not show destruction, in actuality they may show the opposite. But the fact is that it’s a fragile environment.

All things are transient, and these moments in the everyday, in this temporary setting, are interesting to me. There’s a special fragility to the day-to-day down here. 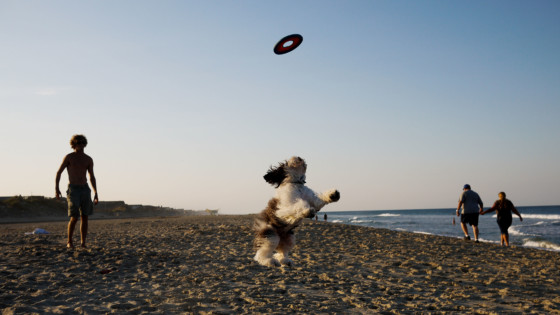 "All things are transient, and these moments in the everyday, in this temporary setting, are interesting to me" 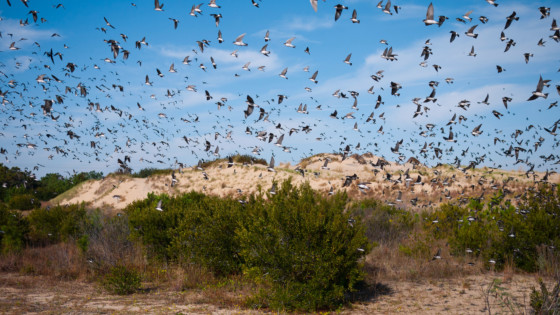 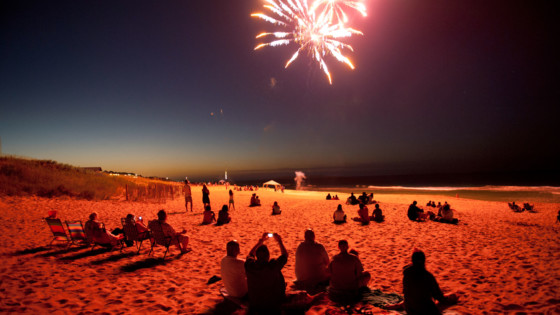 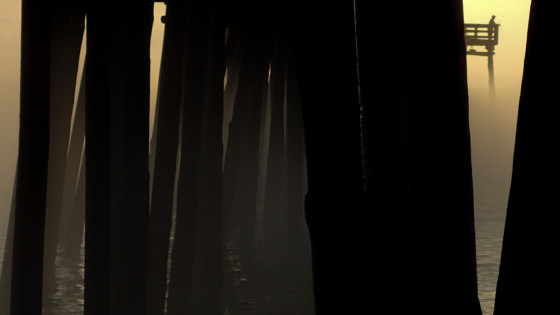 When presented with the idea of “fine art, every day”, it spoke to me immediately. I don’t think too much about whether what I do is “fine art” or not, but somehow this relates to what we photographers do all the time. I always want to be photographing, and to me that means always looking around me, always trying to discover those small tasty morsels that everyday life serves up. Small slices of beauty, small magical moments, if you like. Looking for those moments, the art in normal life, it’s something that I am always doing.

I keep a visual diary, or chronicle of sorts, of my own life and my family. When this project came about it was just a matter of continuing to do that, albeit maybe in a more focused way. Funnily enough I actually already had the Samsung Frame on my wall before this project. I often use it to play a sort of game with my family – I will take a picture, maybe of my kids, or something we saw that day, and I will secretly put it up on there on the screen and wait for them to discover it on the wall. So, in that sense it was even less of an ‘assignment’, I just kept doing what I would be doing usually, in terms of my outlook and process.

I am fortunate that I live in a place I really love. A place that is close to nature, to the woods, the fjord. These are part of my everyday here. I am really lucky, and for me it’s very necessary to have that regular interaction with nature. It’s like oxygen to me, I need it every day. I don’t want to have to go on holiday to experience it.

For me it’s all about keeping a steady chronicle of what we do and what we are. All my adult life I’ve used the camera as a tool to discover things around me, near and far. 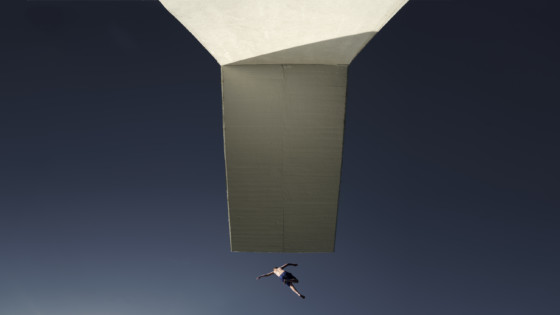 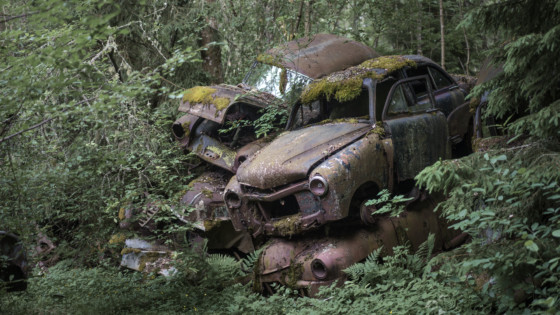 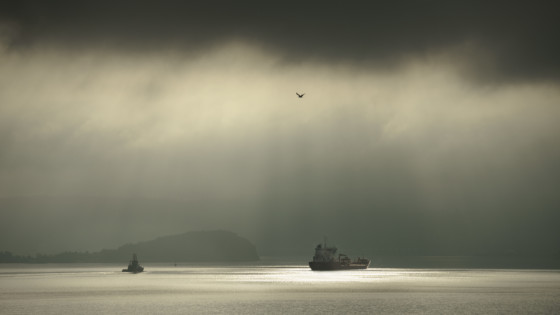 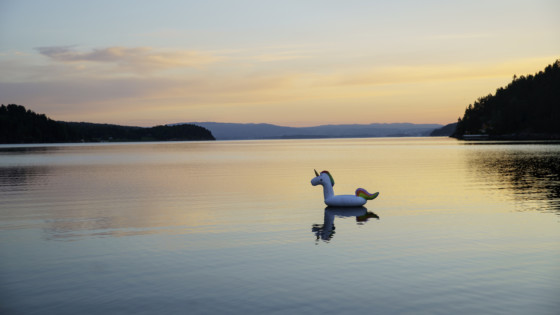 "I always want to be photographing, and to me that means always looking around me, always trying to discover those small tasty morsels that everyday life serves up" 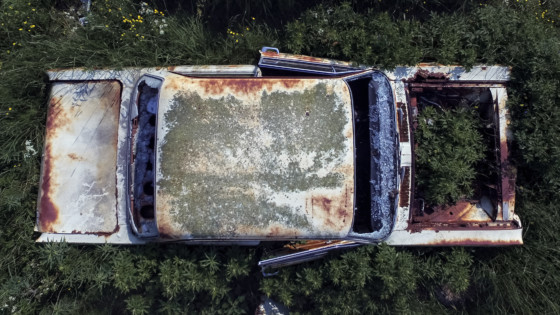 They wanted to see us twist everyday life into something surprising or unexpected. And they decided we should do it at home. When we had the call to discuss ideas, I was in Europe, so I actually ended up flying back to my home in Vallejo, California for a week to start shooting this. With the 9 hour time difference, I knew I was facing a major problem with jet lag. Rather than fighting it, I decided to embrace the jet lag, and when I woke up at 3am my first day back, I grabbed the tripod and stepped out the door.

Since moving back to the US four years ago, I’ve found that making images in the dark lets me see things as more, or different, than how I think I know them. It’s like it liberates me from the repeating clichés that hound me in the daytime. It’s not that I don’t want to understand how things actually are, but one of the things I love about the photograph is that it can allow me to imagine an alternative, the possibility of stepping outside of the normal now.  Things might be this way, but they don’t necessarily have to be. Choosing the jet lag theme was a way of objectifying those qualities that draw me to photography.

A lot of what I’ve shot in Vallejo previously involves people, and with heavy use of flash, it often draws attention to gritty details. This shoot was more detached and introspective. I really enjoyed the opportunity to step back, or inward. The final edit we made was a balancing act, a negotiation between my rather personal, dark selections and the interests of a broad audience. We chose from the jet lag series as well as from other journeys I’ve made recently in California and the western states. 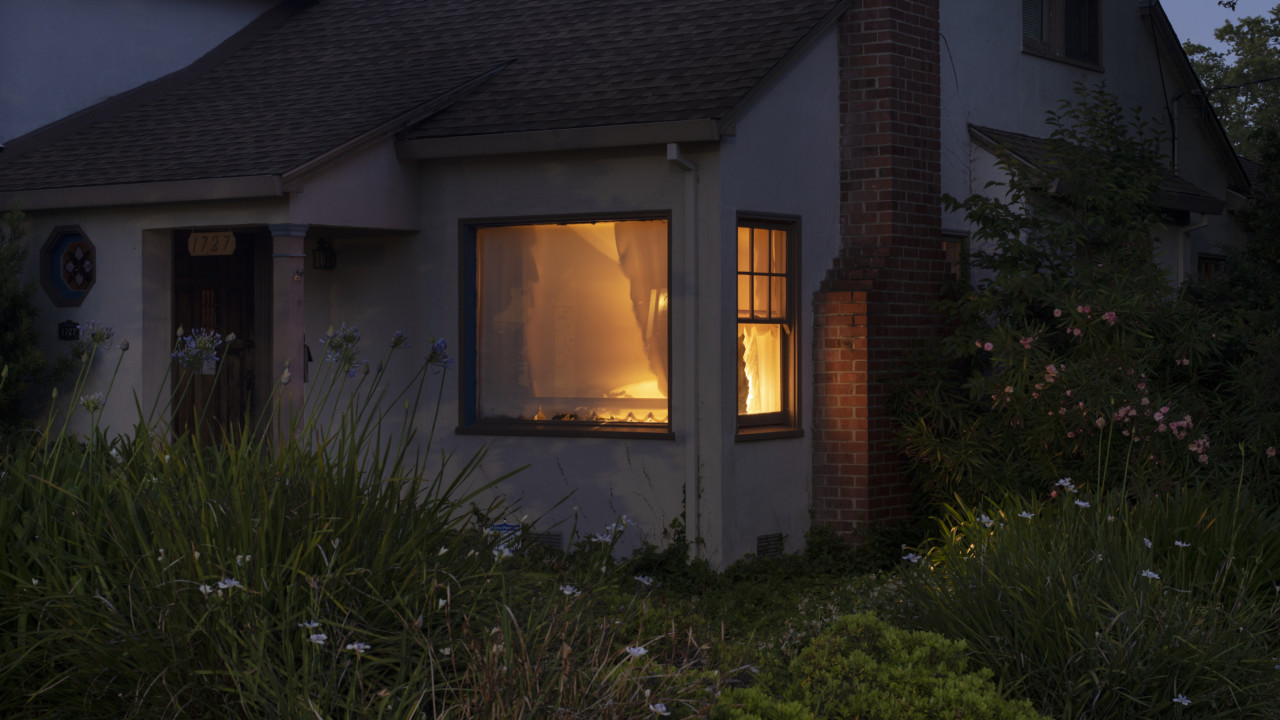 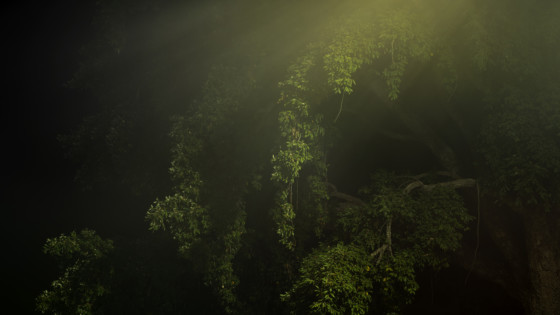 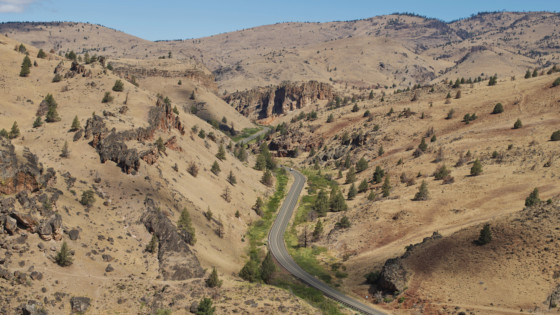 "This shoot was more detached and introspective. I really enjoyed the opportunity to step back, or inward" 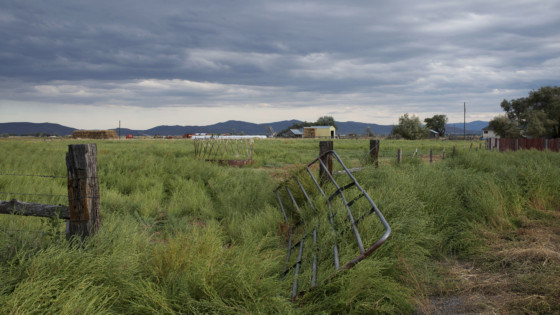 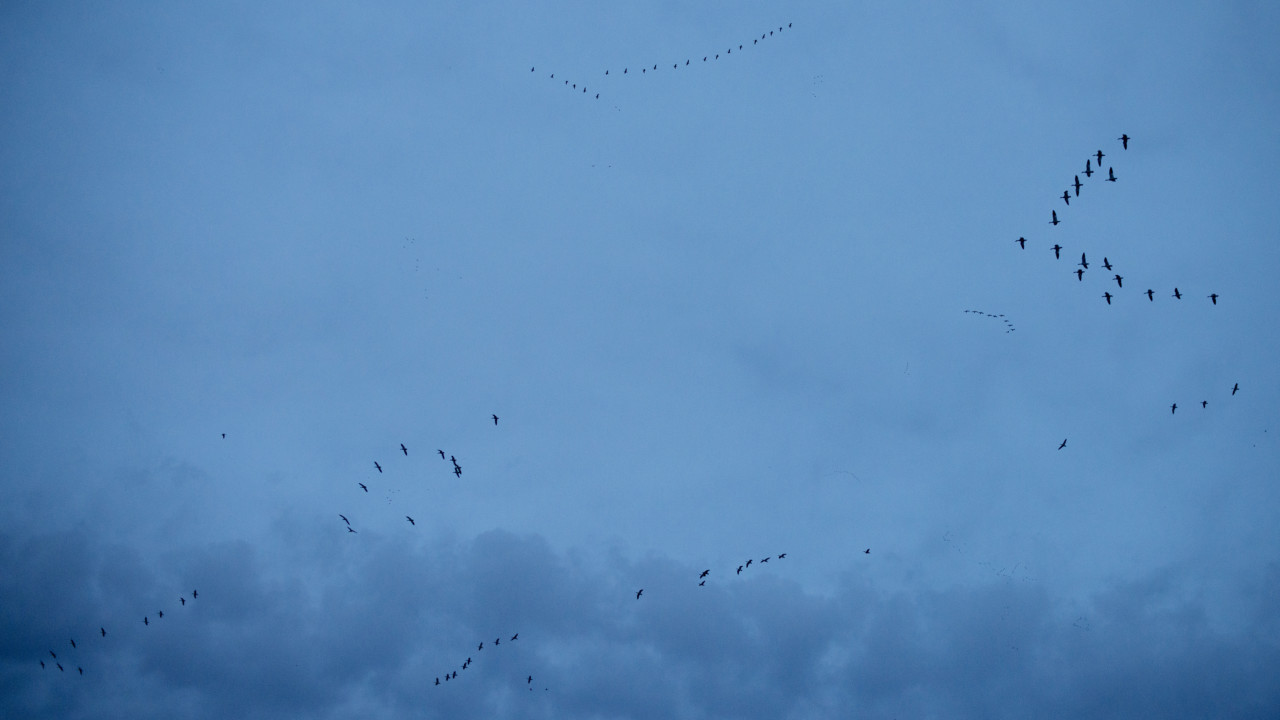 As a photographer, I try to explore the world with as few preconceptions as possible. The phrase, “Fine Art, Every Day,” encapsulates something that excites me about photography—the possibility of discovering a surprising or enigmatic image in the midst of daily life. And the streets of Chicago have long intrigued me, perhaps partially because two of my early photographic influences, Ray Metzger and Harry Callahan, both worked there. In high school in the late 1960s, I remember opening an issue of Aperture Magazine to Metzger’s My Camera and I in the Loop, and being immediately attracted to his vision of Chicago’s chiaroscuro of light and shadow. Moreover, I found myself drawn to the Windy City as a way of expanding my ongoing project on U.S cities. For some 30 years, I’ve photographed predominantly outside the U.S., and feel it may now be time to take a closer look at my own country.

Meandering through the streets of Chicago, with its massive architecture and long history of the blues, I allowed the camera and my instincts to guide me through the city—from the hustle-and-bustle of its central Loop, out to its culturally diverse neighborhoods, with their festivals and summer markets. Walking the streets of this city, I liked the surprise of never knowing just what I’d find around the corner. “Photography is an adventure, just like life is an adventure,” as Callahan once said. 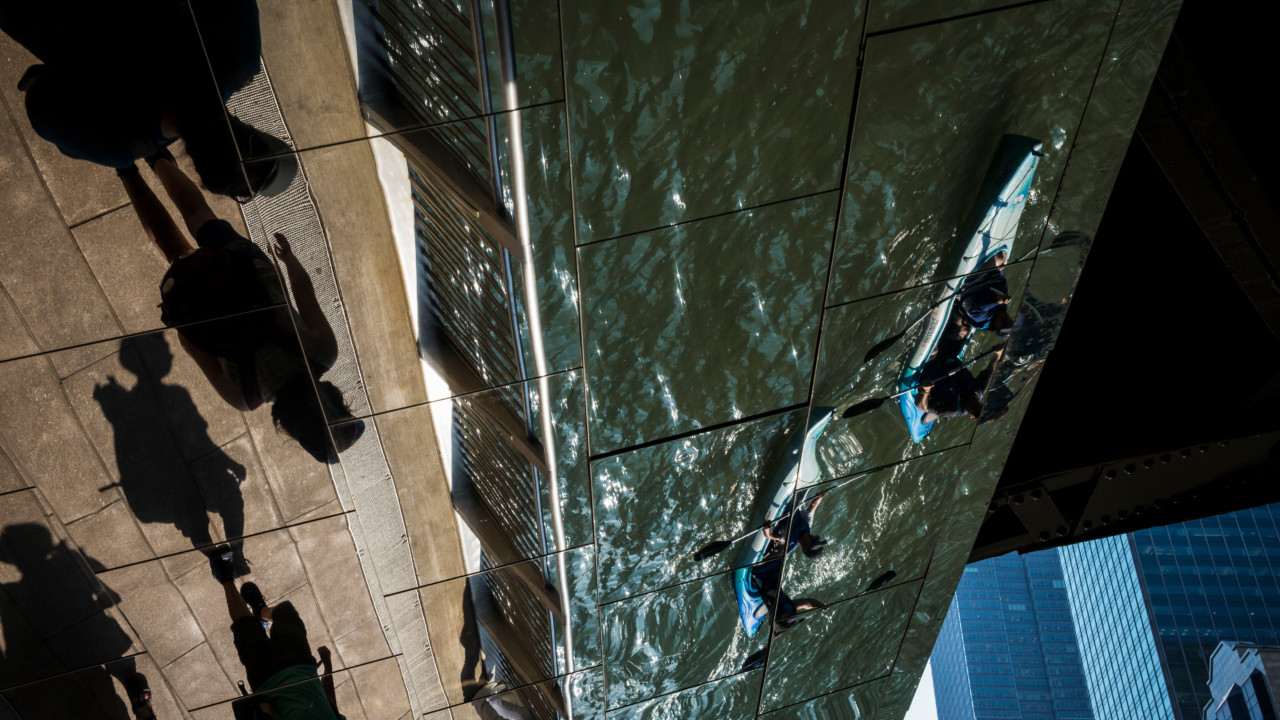 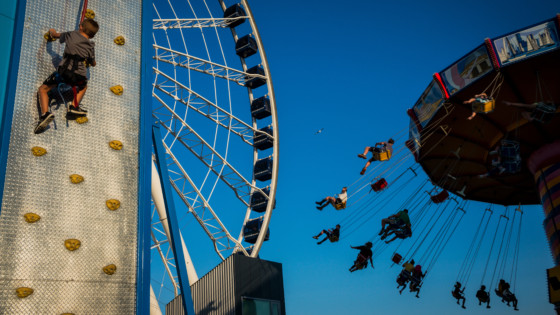 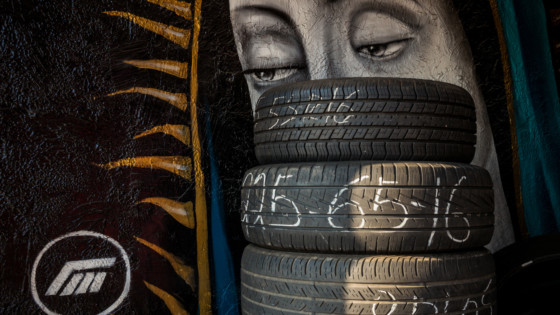 "Walking the streets of this city, I liked the surprise of never knowing just what I’d find around the corner" All 28 images will be made available in the Art Store for the Frame TV, here.