Magnum nominee Emin Özmen on the hope embodied by the 2013 popular uprising, and the repression that followed On May 28th, 2013, a small group of environmentalists occupying Gezi Park, in Istanbul’s Taksim Square, were challenged by police who teargassed activists and set fire to their tents. The protests, which had been ongoing since April, had originated in opposition to plans for razing the park in order to build a shopping mall. As the police moved in the protestors held their ground and over the following days their numbers grew. A standoff developed around Taksim Square and the police crackdown continued, with the coming weeks seeing the repeated and liberal use of tear gas, water cannons, and plastic bullets. What had begun as an environmental protest to save a small park coalesced, in the face of what was seen as unwarranted state violence, into a national anti-government uprising.

Magnum nominee Emin Özmen was in Gezi Park to witness the violent opening phases of what was to become a country-wide expression of dissatisfaction with the status quo. His photos and documentary from Gezi capture the hope, confusion, unity and violence of the weeks that changed modern Turkey. 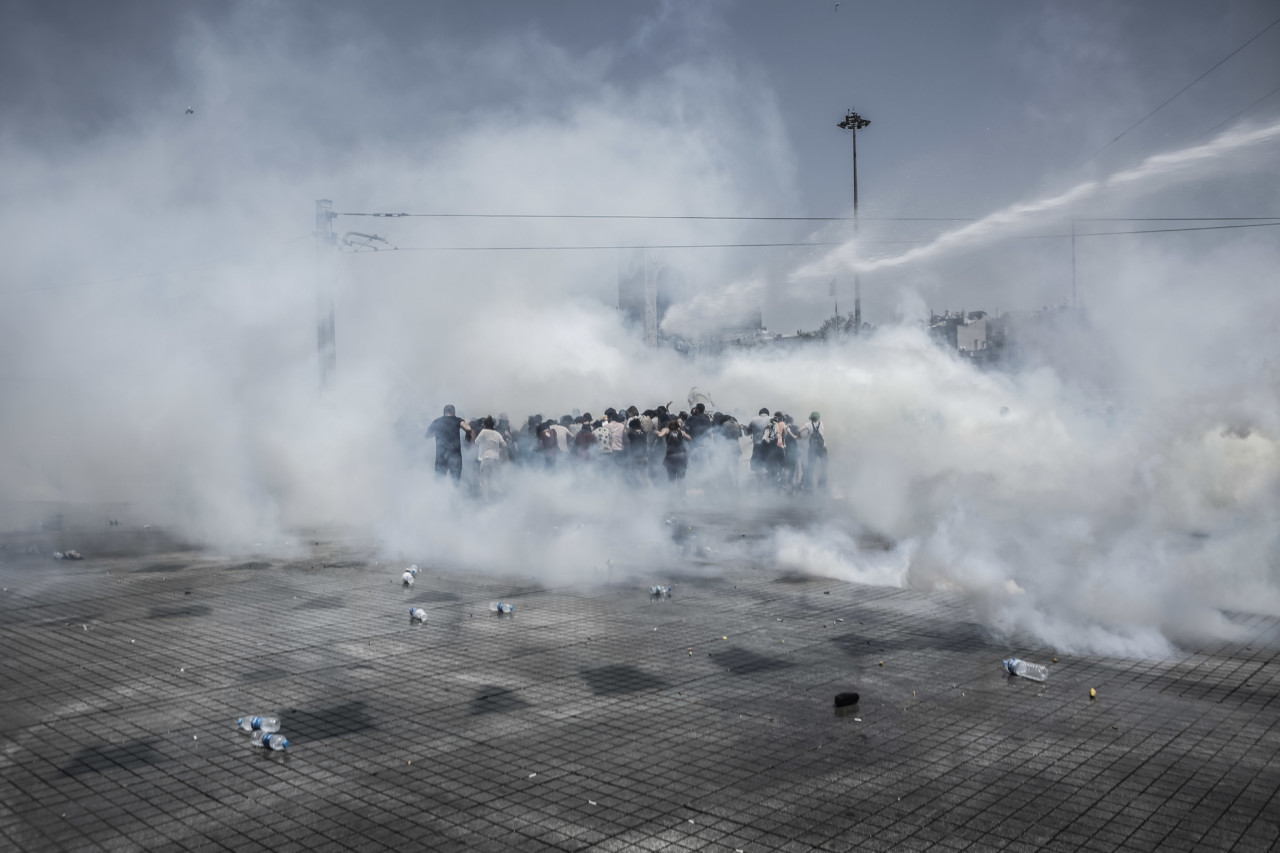 Emin Özmen Gezi Park, where civil unrest began in May 2013 after the violent eviction of a sit-in at the park protesting an urban development plan. Police used tear gas to disperse the crowd that had gathered (...)
in Taksim Square. Istanbul. Turkey. 2013 © Emin Özmen | Magnum Photos
License |

How important were those few days in shaping the recent history of Turkey?

The Gezi protests were, in my point of view, a major turning point and a challenge for Turkish democracy. From the first day in Taksim, I felt that these would not just be simple demonstrations. There was a revolutionary breath in the air. The protests grew very rapidly. The unbelievable violence of the police response – the massive use of water cannons and tear gas – only increased anger and fanned protests in the heart of Istanbul.

It was about more than protecting a park from destruction, these events quickly became anti-government demonstrations, all around Turkey. Gezi became the catalyst for a wider sense of awareness. It was a revolt against the increased authoritarianism of the system and the allegations of mass corruption inside the government. 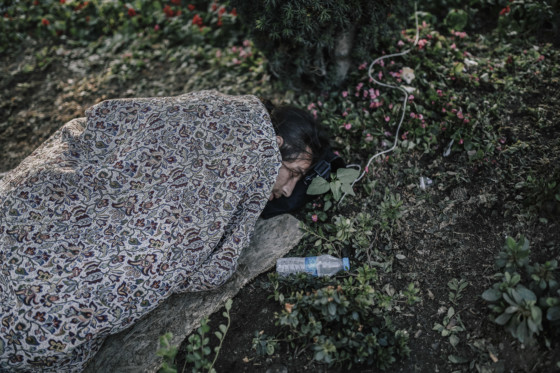 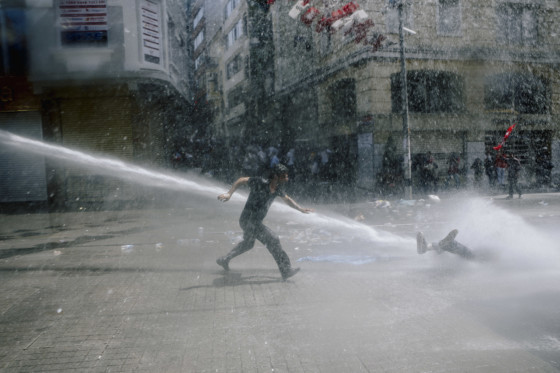 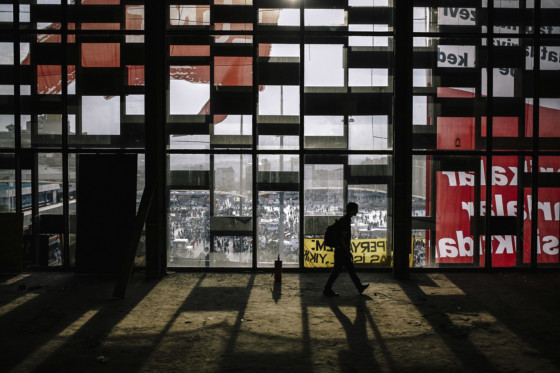 How did you come to be in the park on the day in question?

When the Gezi protests began, I was working for one of the biggest newspapers in Turkey as a staff photographer. I was usually pretty free to do the jobs I wanted to, but the newspaper – like most Turkish media at that time – refused to send me to Gezi to document what was going on.

That opened my eyes to many things and it was in general a defining moment for the press in Turkey. Many in the mainstream media did not relay information, or they did so in a biased and partisan way. Even worse, as police brutality in Istanbul spiralled out of control on one night, CNN Turkey chose to air a documentary on penguins…

I decided to cover the events anyway, to follow and document everything for myself to keep as historical evidence, even though I was sure it would not be published by my employers.

From the first day, in order to follow the events as closely as possible, I pitched my tent in the middle of the park, just as the demonstrators did. It was not a militant act, I was doing my job as a photojournalist. I covered the events from the side of the demonstrators as well as the police. It was important to me to show that the police were fatigued and under extreme pressure, and that there was disagreement among them over the way demonstrators were being treated. I spent my days with a mask on, drowned in a cloud of tear gas. I didn’t fall asleep until my strength abandoned me.

One month after the events, having seen that the newspaper for which I was working had not published anything about these demonstrations, I decided to resign and start my freelance career by founding my own photographic agency.

"As police brutality in Istanbul spiralled out of control, CNN Turkey chose to air a documentary on penguins" Emin Özmen A young man stands with a gas mask in a cloud of tear gas near Gezi Park, where civil unrest began in May 2013 after the violent eviction of a sit-in at the park protesting an urban development pla (...)
n. Police used tear gas to disperse the crowd that had gathered in Taksim Square. Istanbul. Turkey. 2013 © Emin Özmen | Magnum Photos
License | 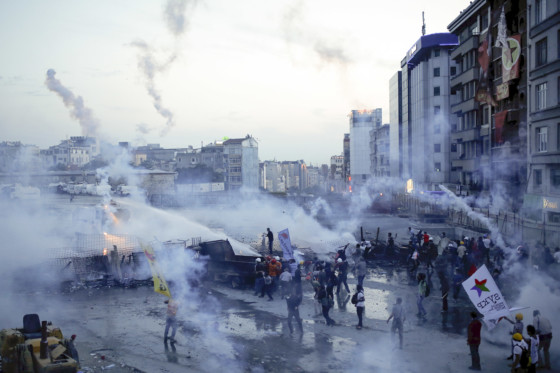 Clearly, what happened at Gezi Park is hard to isolate from the last five years of events in Turkey. How central were those early days in creating the dynamic we see today in the country?

From these early events emerged a new opposition based on humanist values. Suddenly, hundreds of thousands of people, who did not see their views reflected by any of the traditional political parties, felt heard and represented by this new movement.

This new breath, however, was quickly suffocated by the violence of the government’s response. The government has never given in or conceded anything to the protestors in any way.

Events at Gezi marked a turning point in the way Erdoğan ruled the country. He felt extremely threatened by this new movement. He sees any form of dissent as treason. During the protest, at a party rally outside Ankara, he said “Nobody can intimidate us. We don’t take orders from anybody except God.”

"Suddenly, hundreds of thousands of people, who did not see their views reflected by any of the traditional political parties, felt heard and represented by this new movement." It was the beginning of something, but the events that have taken place in Turkey since then have killed that movement. After Gezi came the rebirth of the Kurdish conflict, the elections of 2015, bloody and repeated terror attacks, the attempted coup, violent repression, purges, the state of emergency decreed, the change of constitution following the referendum, the snap presidential elections… A spiral of brutal and stressful events has struck Turkey since the  protests. The zeal of 2013 has faded, and the hope too.

I remember very well that people were chanting, ‘This is only the beginning, the struggle continues’, from the first day of the protests until the last. Now, when I think about it, they weren’t wrong. That was just the beginning, the beginning of a new era. But certainly not the one they had in mind at the time. 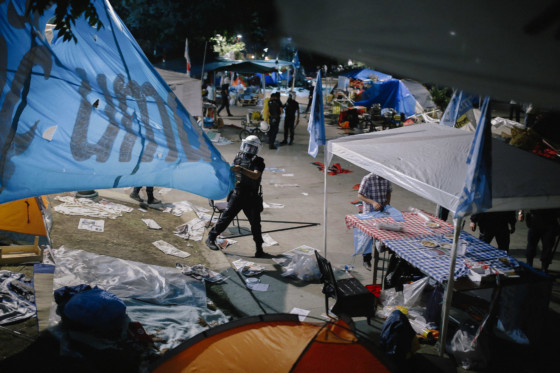 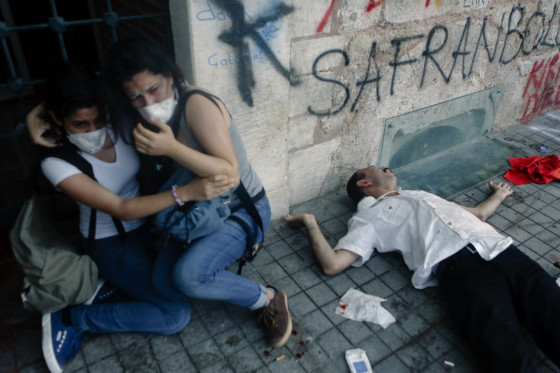 What is there, on looking back, that you still find to be inspiring from those days?

What impressed me during Gezi was discovering the power of social media. The demonstrators organized themselves very quickly and showed solidarity. Even though there were many different groups among the protestors, any sign of political affiliation was forbidden. They communicated in an effective way thanks to twitter in particular. There were for example about ten barricades near Besiktas’ stadium, near Taksim square: if the police arrived on the spot and began to destroy the first barricades then the demonstrators were warned on twitter and immediately began to erect new barricades. This is just one example among many. I have never witnessed scenes of violence or tension between protestors – on the contrary, I only witnessed it when I was documenting the police.

There were also many people who volunteered to provide medical support. One of the largest and most prestigious hotels, located directly opposite Gezi Park in Taksim, even became a shelter for the protesters who were escaping from the fierce police intervention. Recep Tayyip Erdoğan had repeatedly criticized this hotel for opening its doors to protesters.

These last five years and the exceptional and unfortunate events that have taken place in my country have made me nostalgic for a time when everything was still possible, when all hope was still allowed. Today, to many people, protest seems unthinkable. Fear and resignation are paralysing. I remember back in 2013, during the protests, people were saying of Erdoğan : “How can a whole society become a prisoner of the will of one person, of one person’s mood?” – We are now in 2018 and that sentiment may make even more sense today.

"Today, to many people, protest seems unthinkable. Fear and resignation are paralysing." 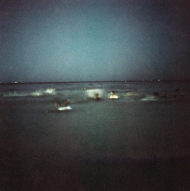