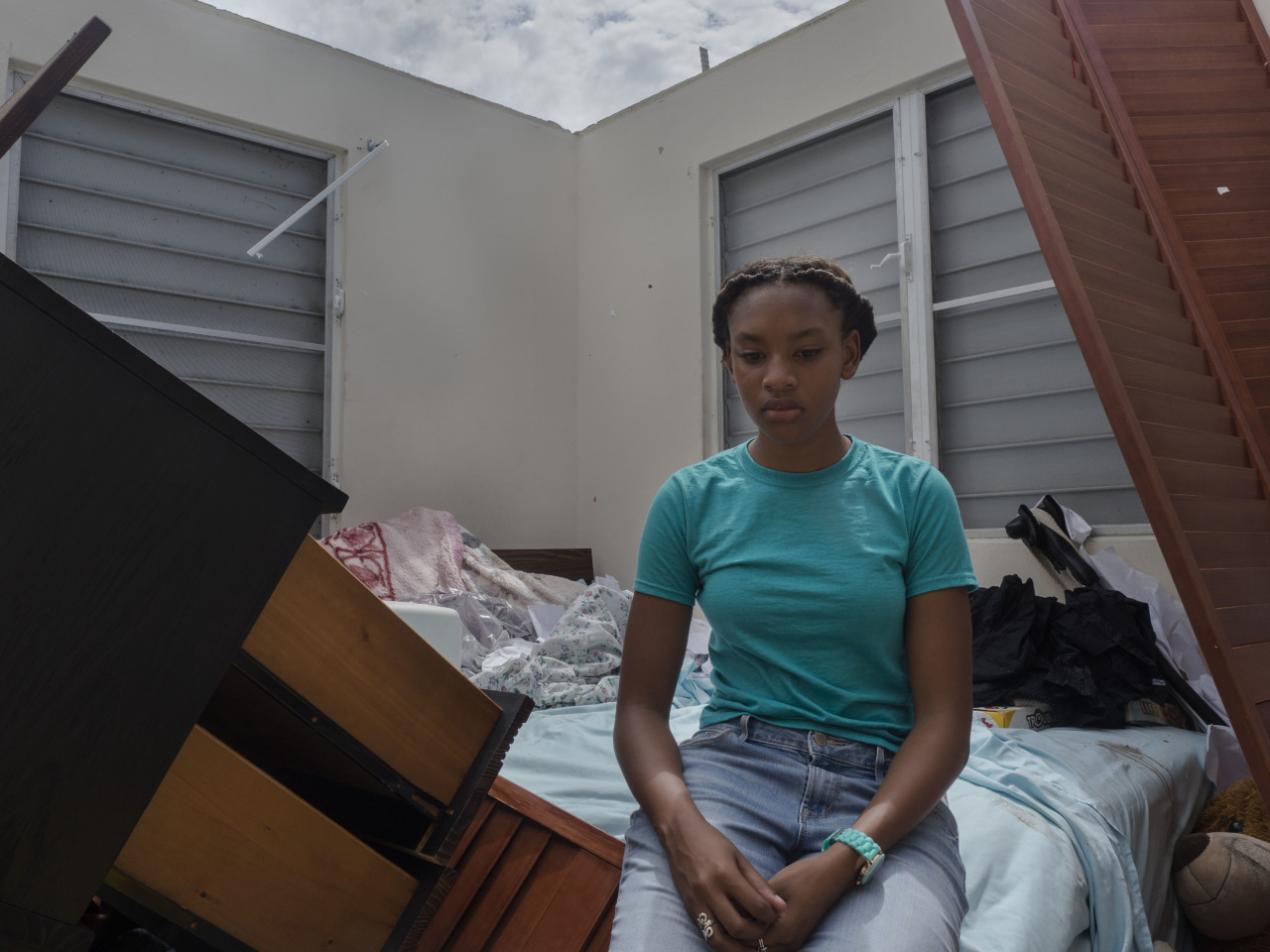 Enri Canaj “The night of the hurricane we closed ourselves in the toilet and spend all night there. The next morning we saw all our house was destroyed”. - Sera, age 13. September 23, 2017. St. Croix, US Virg (...)
in Islands. © Enri Canaj | Magnum Photos

In September 2017, the US Virgin Islands were already suffering the effects of Hurricane Irma, which battered the island, when another category 5 hurricane, Maria, provided a second destructive punch just 14 days later. The islands were without electricity, hospitals were destroyed and food supplies were limited. Due to the difficult conditions, very few photographers were able to make it to and operate on the Islands. Magnum nominee Enri Canaj visited the area after Irma and during Maria. His photographs and testimony paint a portrait of a place in a state of emergency, where many people are still in a state of shock and, despite tensions running high, the human spirit of resistance endures. 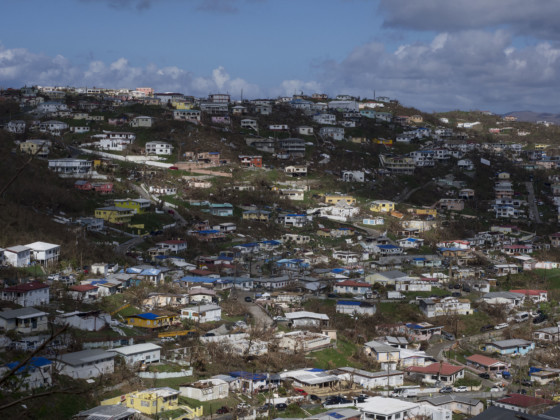 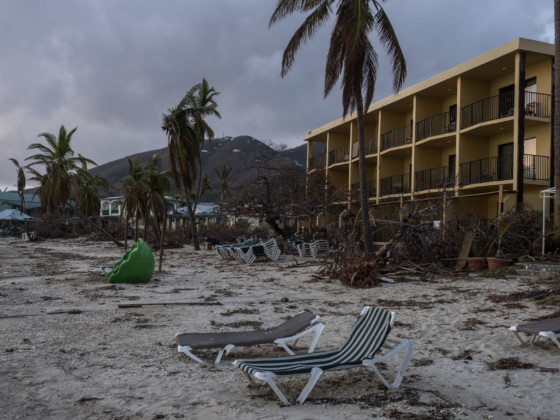 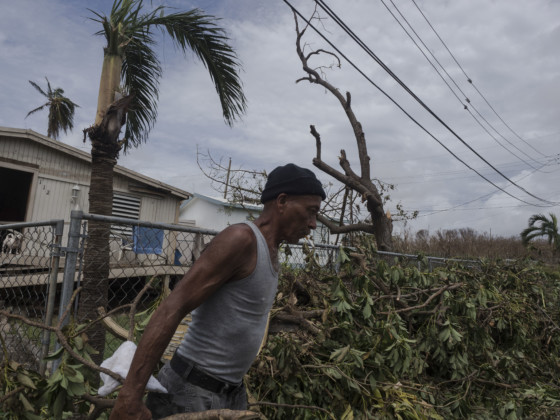 Enri Canaj “I was sitting in my chair and was  starring from the window. It was the first time that I saw the coconut tree reach the ground. In the same moment the house started to fall apart. I got scared, c (...)
overed my self with the chair I’m sitting in now. It saved my life.” - Pe Phat Trong. September 24, 2017. St. Croix, US Virgin Islands. © Enri Canaj | Magnum Photos

“The first day when Maria was still a category 1-2 I went to St Thomas using a local ferry. The island was devastated from Irma, there were many destroyed buildings, lots of trees were down, there was no electricity on the island and there were only a few spots where you could get mobile phone reception,” said Canaj.

“Cars were only allowed to move around between midday and 6pm, and the traffic amplified the chaos of the situation. People had to wait in long lines to get water, food and gas. Locals were exhausted, sad, angry and tensions ran high, which is understandable given the circumstances and all they had lost.” 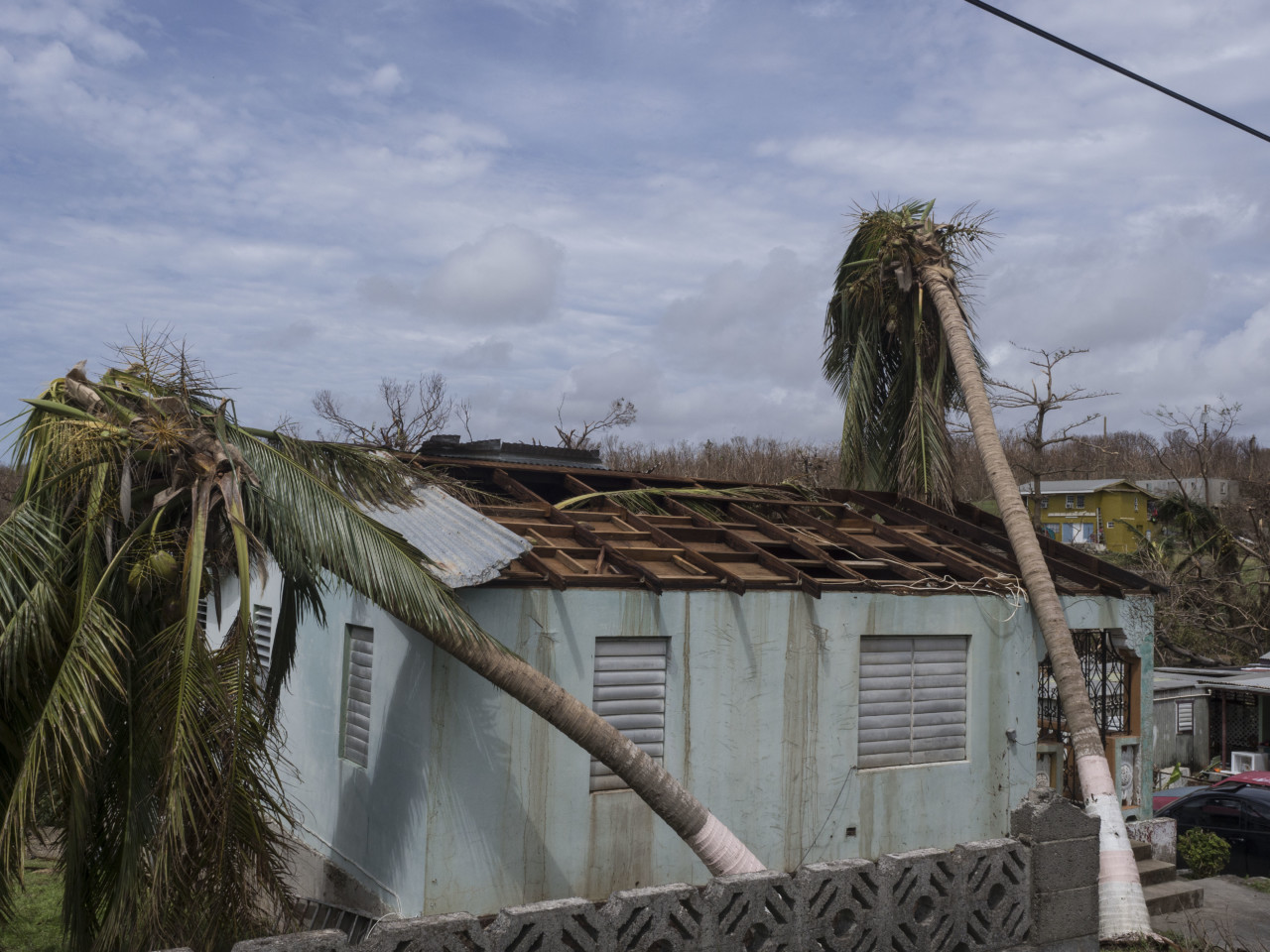 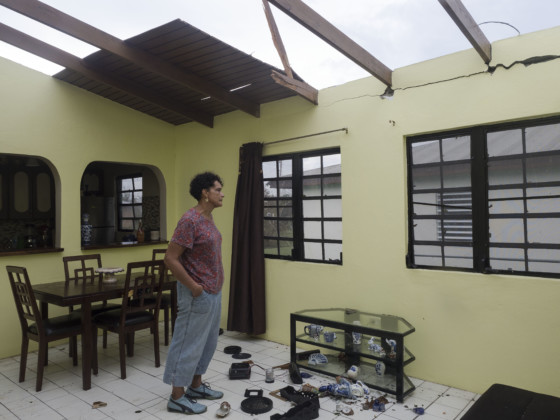 Enri Canaj “I came here 4 years ago and I bought this house to spend the rest of my life in it. Maria destroyed it!” - Demetria Hugo. September 21, 2017. St. Croix, US Virgin Islands. © Enri Canaj | Magnum Photos 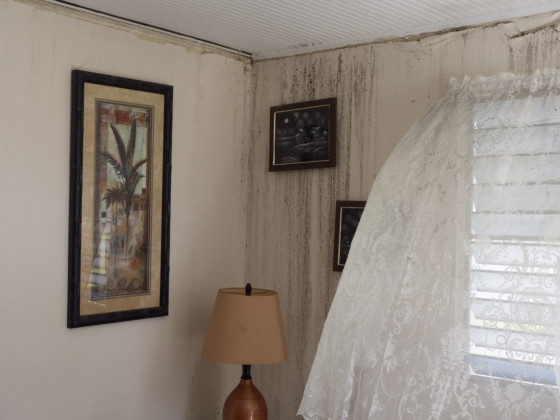 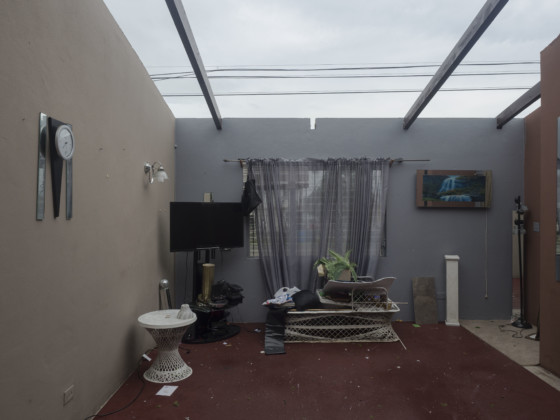 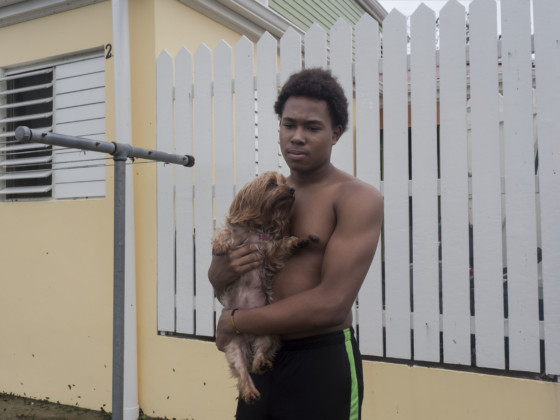 Enri Canaj “All that water was coming in. Its still there now.” - Jesus Filis, who spent the night Hurricane Maria hit the island inside his house. September 20, 2017. St. Croix, US Virgin Islands. © Enri Canaj | Magnum Photos

When Maria reached the Islands Canaj was in St Croix, spending the night in one of the few hotels that remained open. “The noise from the wind and rain was huge, and, from the window it was difficult to see anything in the dark grey that had covered everything,” he remembers.

“The next morning I managed to go outside even though it was a state of emergency. I felt like I was the only one on the Island – it didn’t feel real. The sky was heavy and gray, the boats has been thrown out of the sea, trees were down, blocking the roads, houses were destroyed – and it was silent. Some of the people I met didn’t have much to day. They were in shock, stood outside of their destroyed houses.”

Those people included 13-year-old Sera, who Canaj photographed in the ruins of her home. “The night of the hurricane we closed ourselves in the toilet and spend all night there. The next morning we saw all our house was destroyed,” she told him. 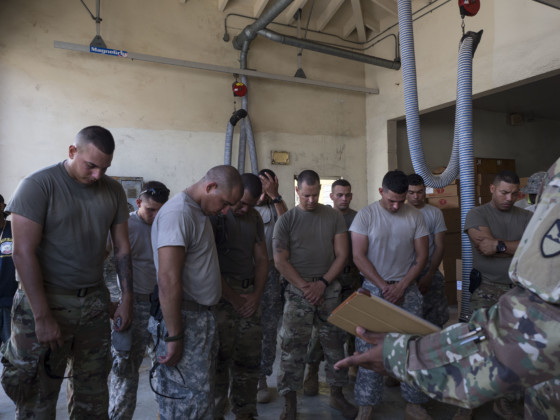 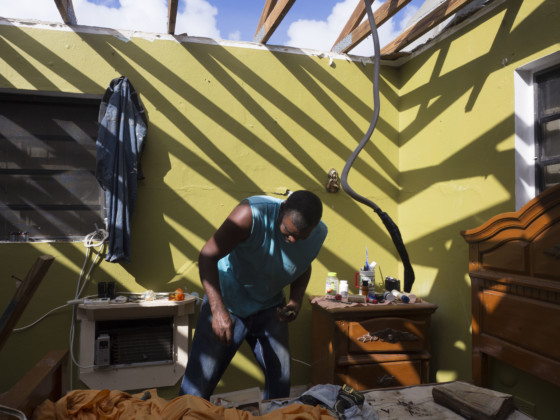 In the days leading up to Maria, Canaj captured chaotic scenes; supermarkets were full as people queued for half a day to get basic supplies, such as water and food. Canaj stayed in St Croix for five days after Maria. Although, by the time Canaj was preparing to leave he witnessed assistance from the US Navy arriving, and attempts to get back to some semblance of normal life, such as a barber shop pitching up despite the former premises being without electricity, it was still very much a state of emergency. “When I left there was still the same chaotic atmosphere as there was on the first morning after the hurricane.” 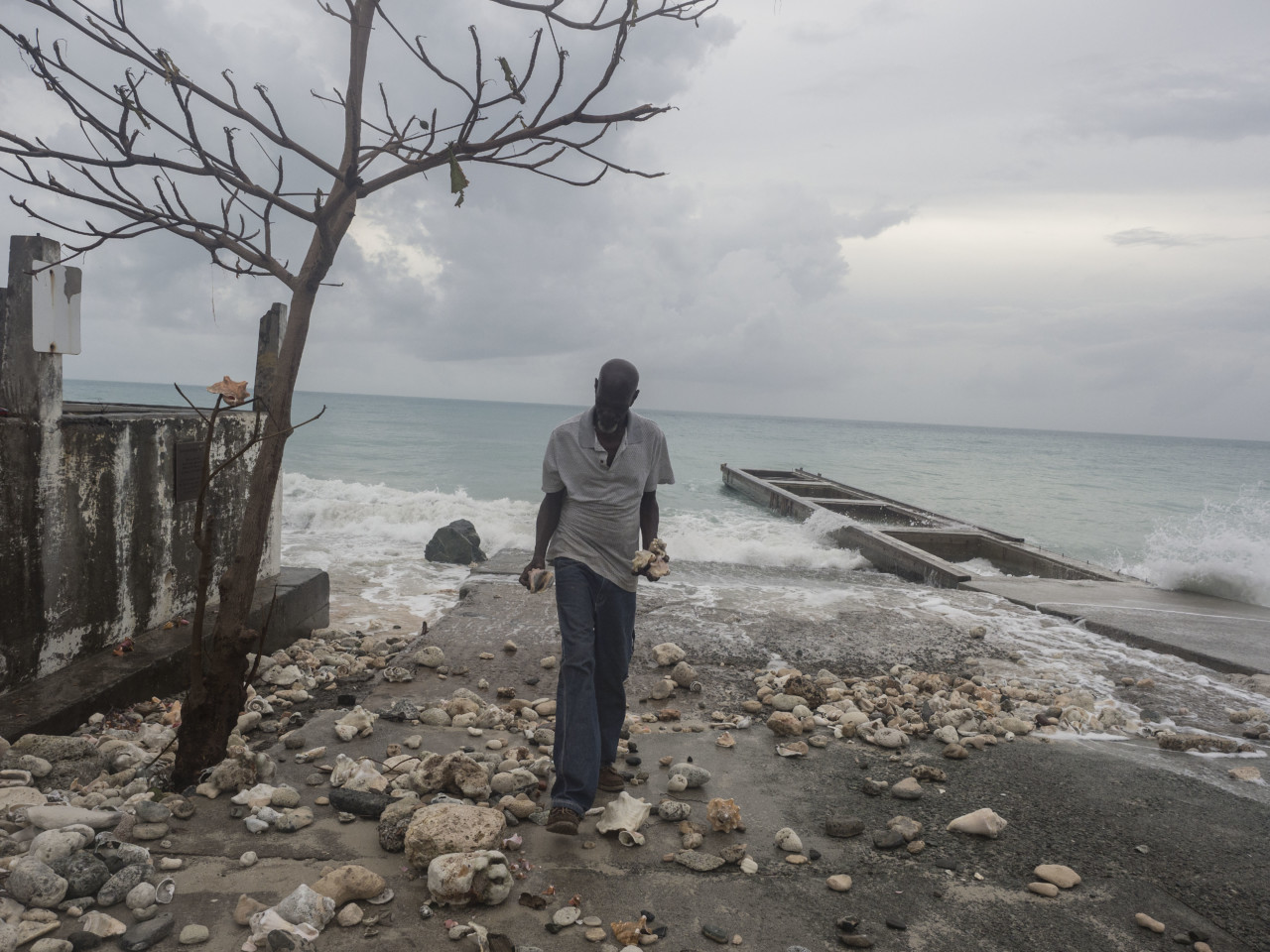