Having crossed the Sahara twice before while he was documenting the region during World War II, in 1957 George Rodger returned to the desert along with his wife Jinx Rodger. The pair travelled from the Moroccan-Algerian border, covering over 4000 miles in 90 days. “We drove, surrendering our car and ourselves to one of the most punishing trips on earth” wrote Jinx. With the Sahara notorious for its extreme heat and vast size, the undertaking was a perilous one and almost cost them their lives on multiple occasions. The resulting photographs offer a rare insight into the landscapes and inhabitants of one of the world’s most remote and unexplored terrains. 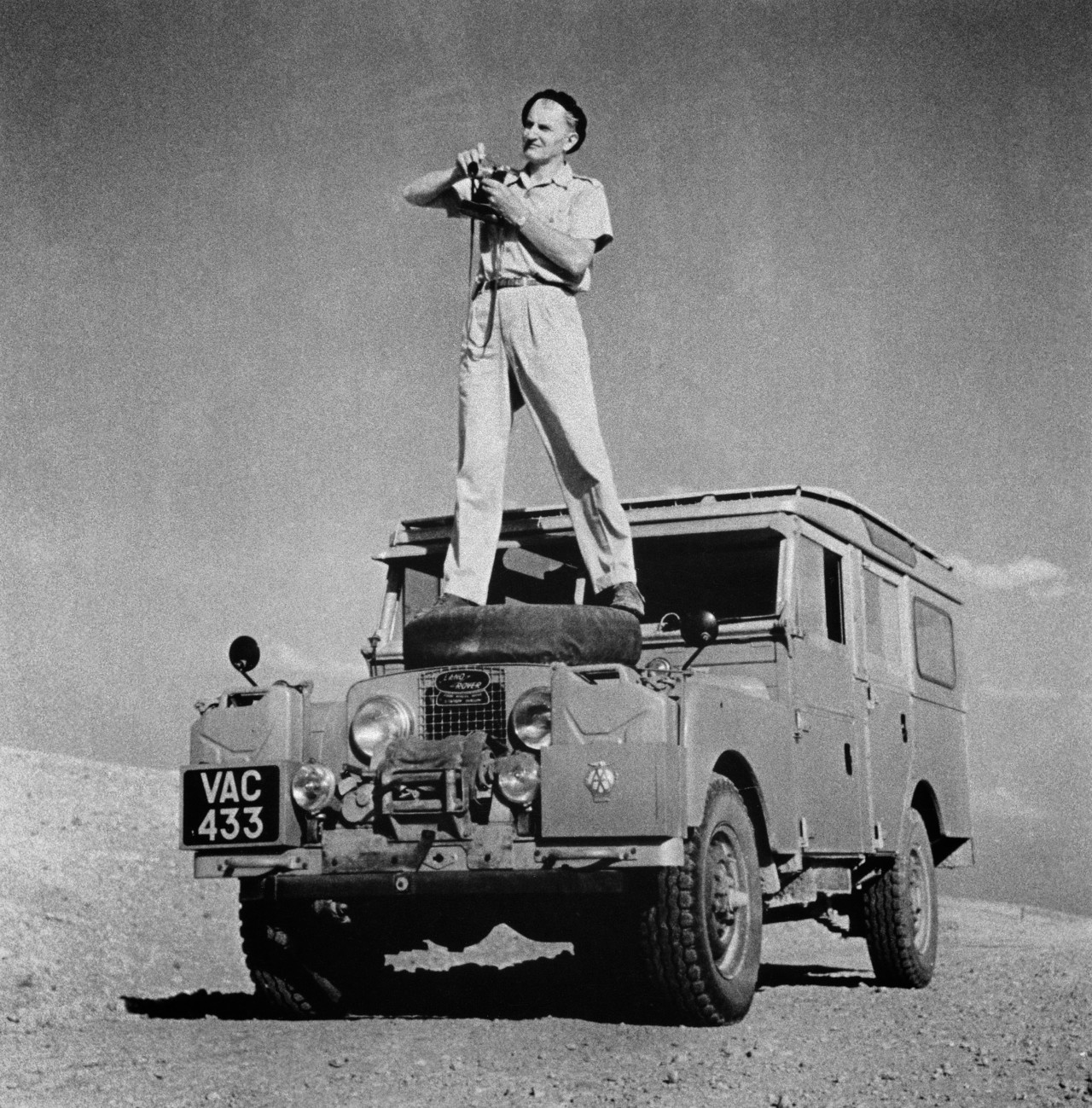 "We drove, surrendering our car and ourselves to one of the most punishing trips on earth" 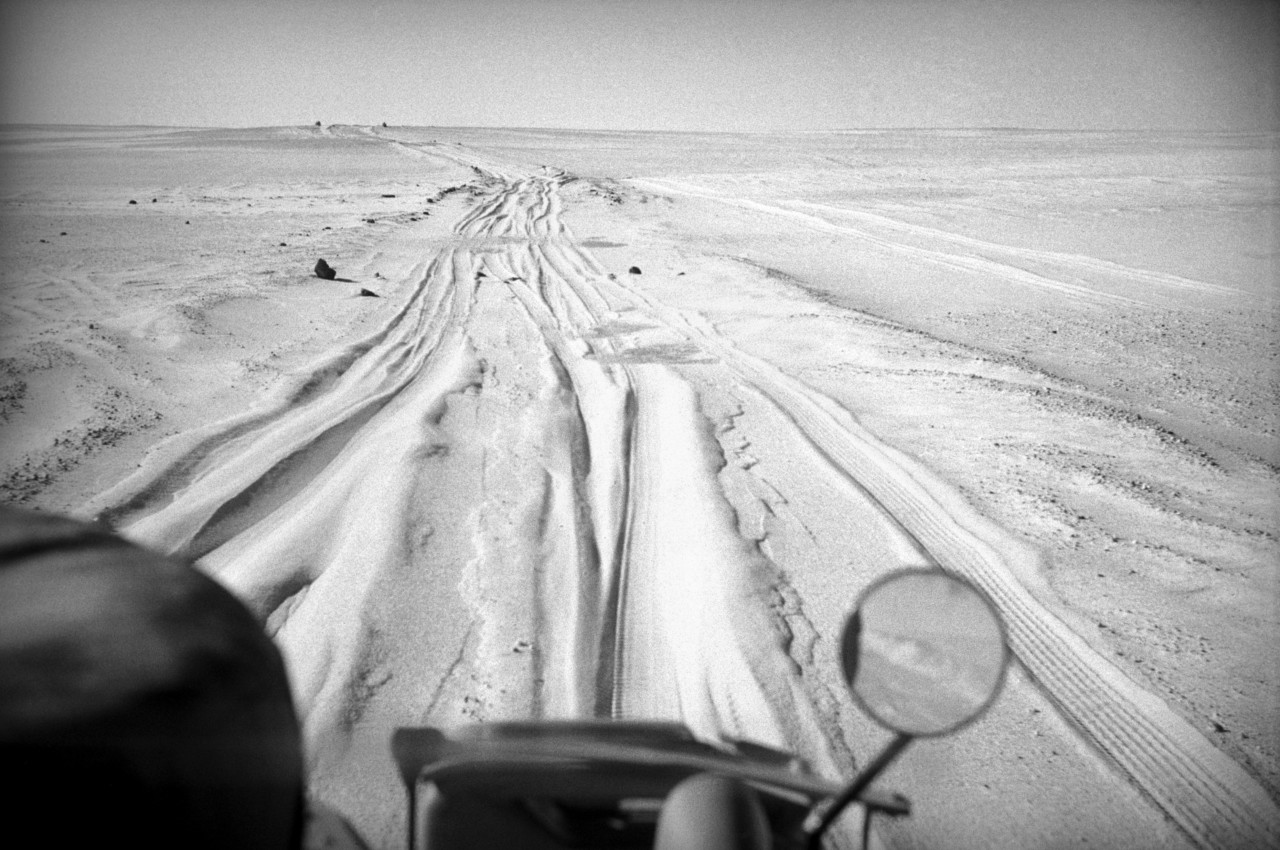 “The Sahara can kill, and kill quickly,” wrote Jinx. George had almost died of thirst on his previous Sahara crossing and spent months preparing for their expedition. Somehow the pair managed to fit the contents of a packing list that stretched over four pages into a newly purchased Land Rover, which they named Mzuri, meaning “very good” in Swahili. Arriving in Paris in the January of 1957, Rodger and Jinx battled for visas and permits for three weeks, a process further complicated by the fact the war in Algeria was intensifying. Many vehicles leaving Algiers for the South were being attacked by armed terrorist bands and so they decided instead to cross through Morocco. On receipt of their visas George and Jinx set out for Tangier, arriving there on the first week of February. 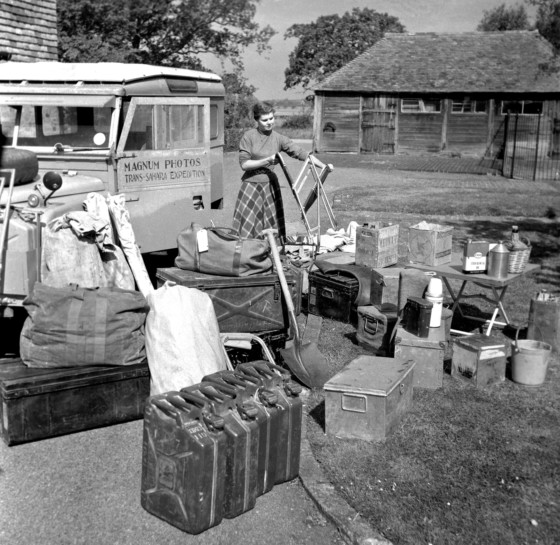 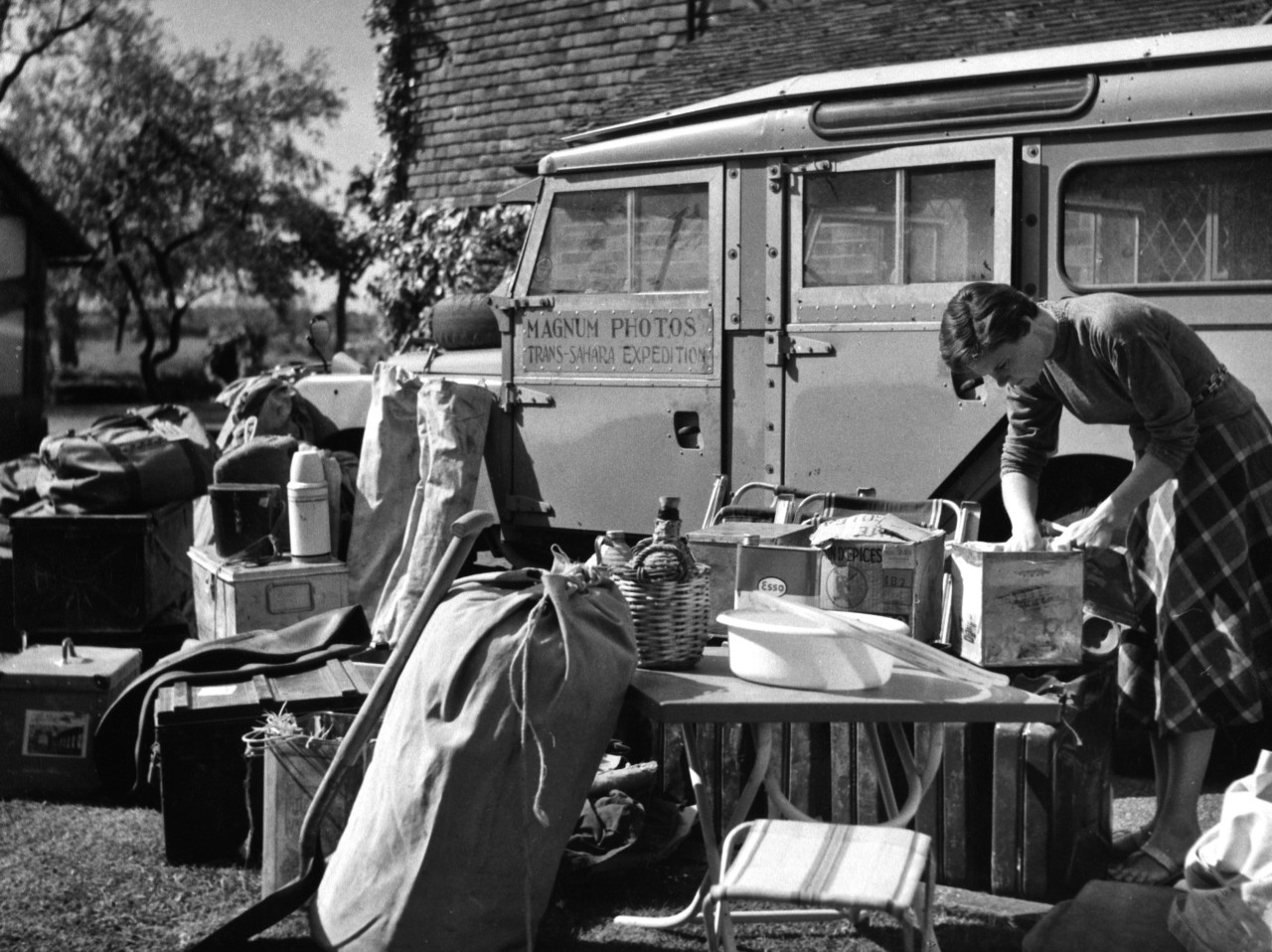 "The Sahara can kill, and kill quickly" 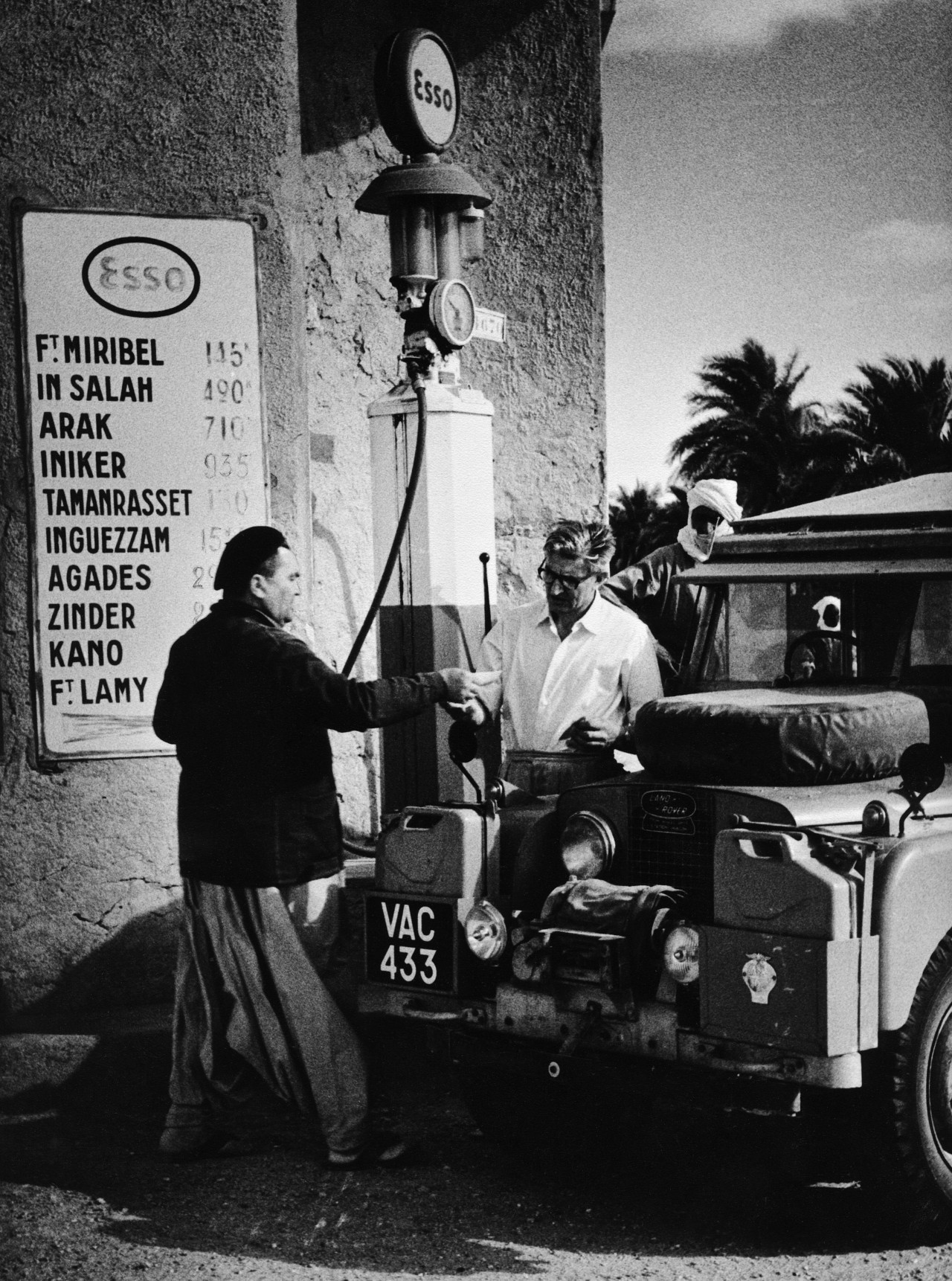 Regardless, from Morocco they still found themselves journeying through one of the most dangerous areas in the region and for the last leg of their journey to the Sahara they were escorted by a military convoy of eight armored cars and fifty armed French soldiers. Finally arriving on the edges of the desert, the pair abandoned the paved road that runs across it, choosing instead to zig-zag between the two main routes, the Tanezrouft and Hoggar pistes, leading south from the Saharan Atlas across the Algerian desert. This allowed them to experience “just about every bump, washboard, corrugation, and drift of sand in the Algerian Sahara,” as Jinx put it. But venturing off piste also engendered a whole set of other potential dangers: “soft sand, rocks, or fesh-fesh, the peril of perils – a dust fine as talcum powder and treacherous as a bottomless swamp.” 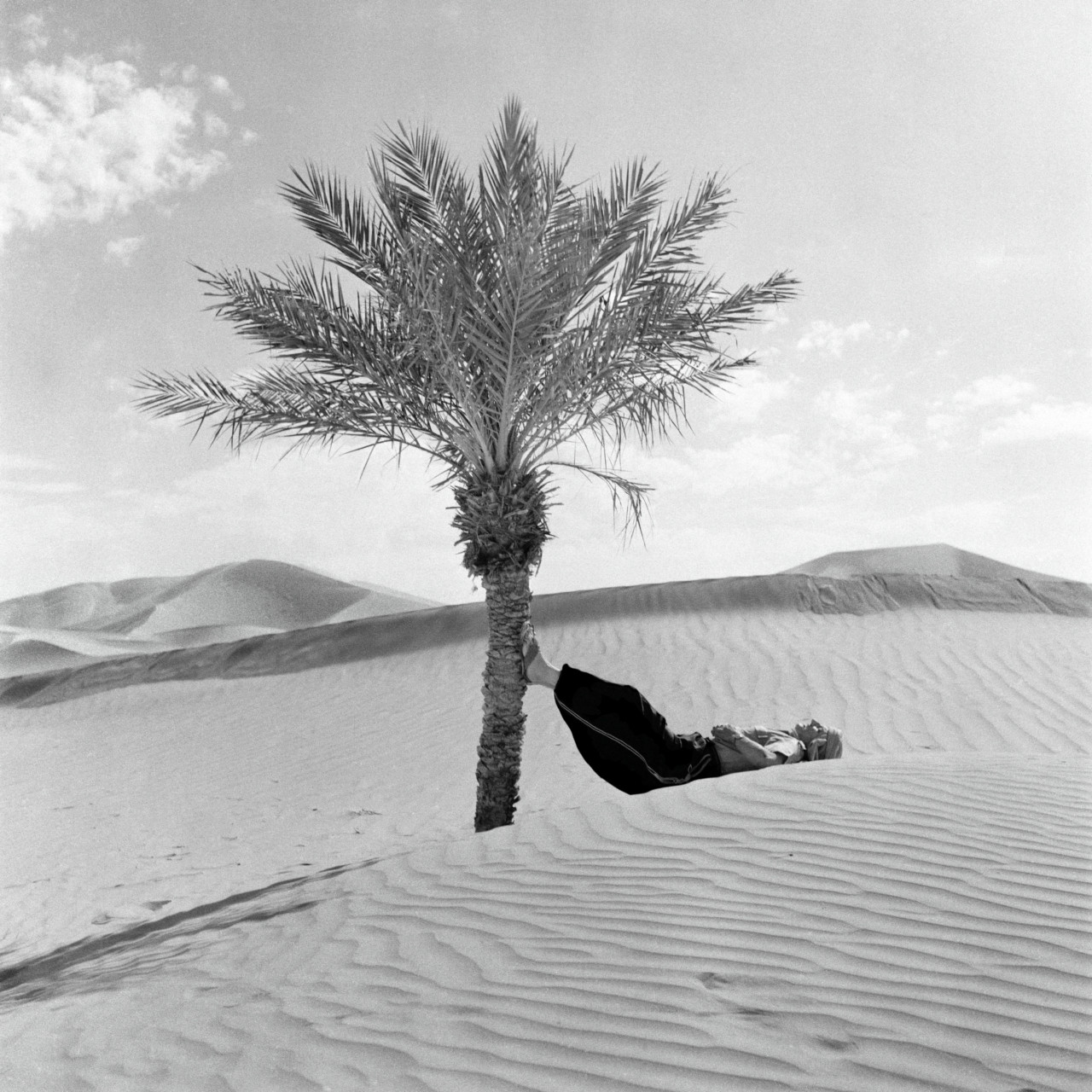 The pair would often go a fortnight before encountering another vehicle. Occasionally, they came across people who had broken down and been stationary for days waiting for assistance. Jinx remembers once driving past a lone hiker making his way across the desert; despite being seventy-five miles from the nearest oasis he declined their offer of a lift. These desolate stretches were broken up by stops at oases: “life in the desert clings to the oases, scattered like a broken chain of emeralds across the golden sand,” remembers Jinx. Consisting of a collection of mud buildings arranged into winding, narrow streets, each oasis they passed through had its own distinct character. The houses in Adrar were a brilliant red-orange, in Salah a burnt ocher, in El Golea sand-colored and in Timimoun a vivid, deep red. 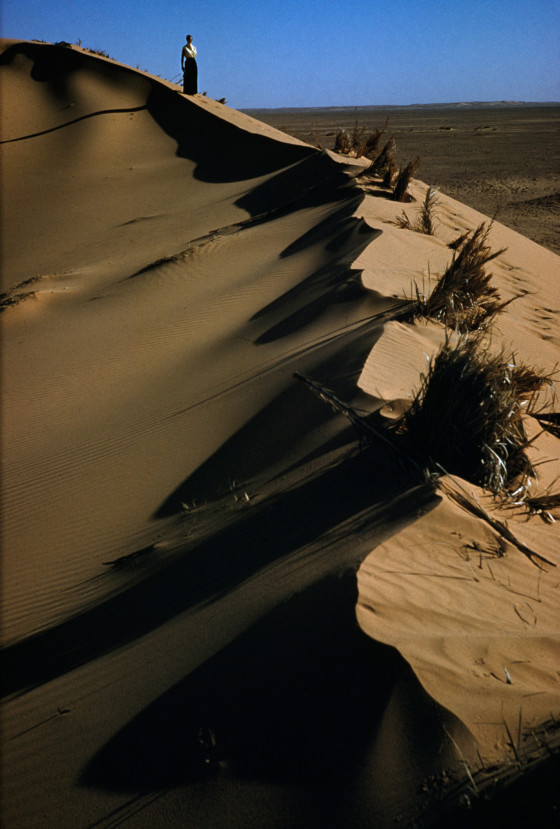 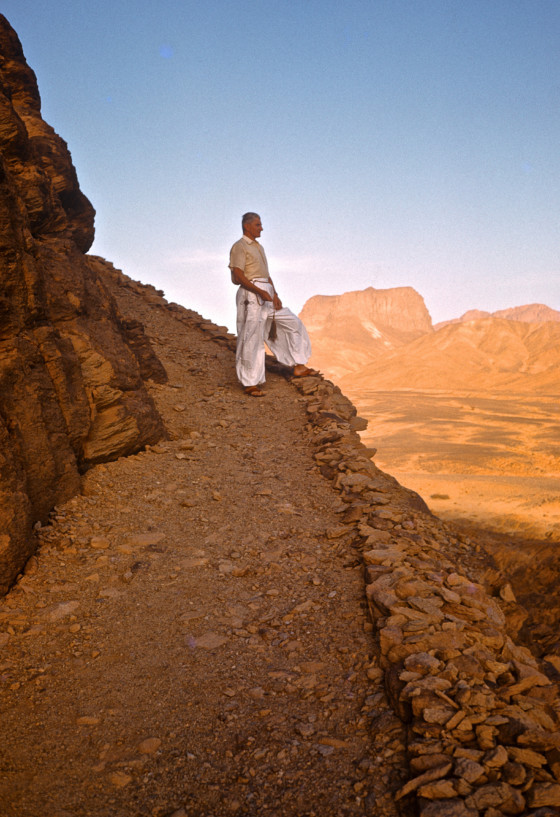 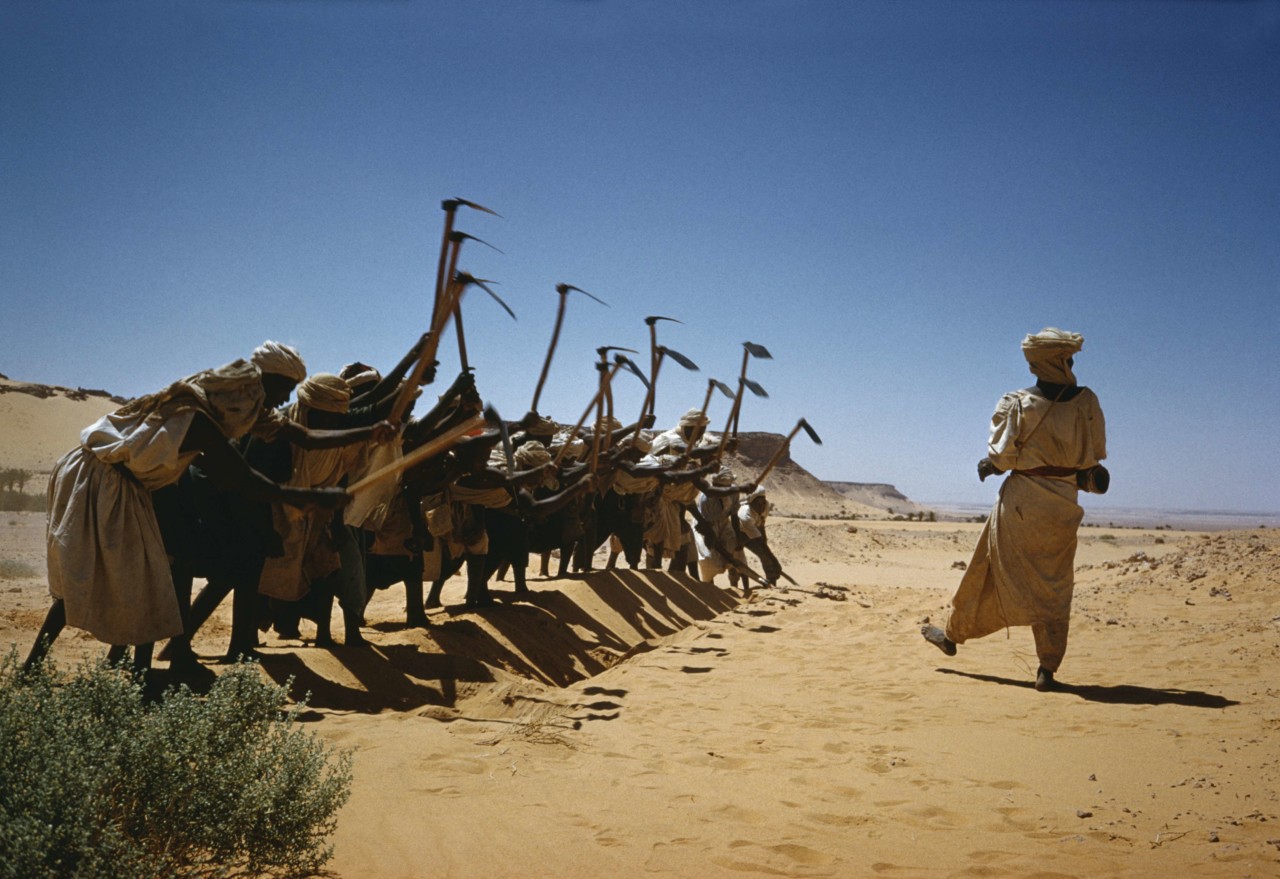 "Life in the desert clings to the oases, scattered like a broken chain of emeralds across the golden sand" Each stretch of the Sahara they passed through was also distinct in both climate and appearance. As they journeyed past Adrar, through the Tuat region, they encountered their first proper sandstorm: a three-day long barrage of unrelenting gusts. On the road to Tamanrasset they passed through the Ahaggar, or Hoggar, a mountainous region at the center of the Sahara where the miles of sand are punctuated by jagged peaks jutting some 9,000 feet into the air. From here the pair went in search of the region’s veiled tribesmen, the Tuareg. Journeying through a series of the tribe’s encampments, Rodger and Jinx were introduced to their extraordinary customs and way of life. In her diaries, Jinx wrote that  Timimoun, an oasis in the province of  Adrar, was the only place really worth visiting, with its striking white Marabout tombs set against the deep red sand. It was only at the end of their journey that George and Jinx found themselves in serious danger. Driving back to Morocco with the military convoy that escorted them at the start of their trip, one of the accompanying vehicles was hit by a land-mine. The pair decided to risk their lives and continue even after discovering that the roads were now littered with this kind of ammunition. “For the first time I knew the silence and fear of the desert. I was frightened as I had never been before. The track into Morocco had never been heavily traveled, and since the first mines were laid all traffic had stopped,” wrote Jinx. After weaving their way through ominous hills seething with watching rebels the pair finally made it back to Tangier and from there, home to England.

Excerpts from the diaries that both George and Jinx kept during their trip are presented here, alongside photographs from the journey, offering an insight into their adventure across the Sahara. 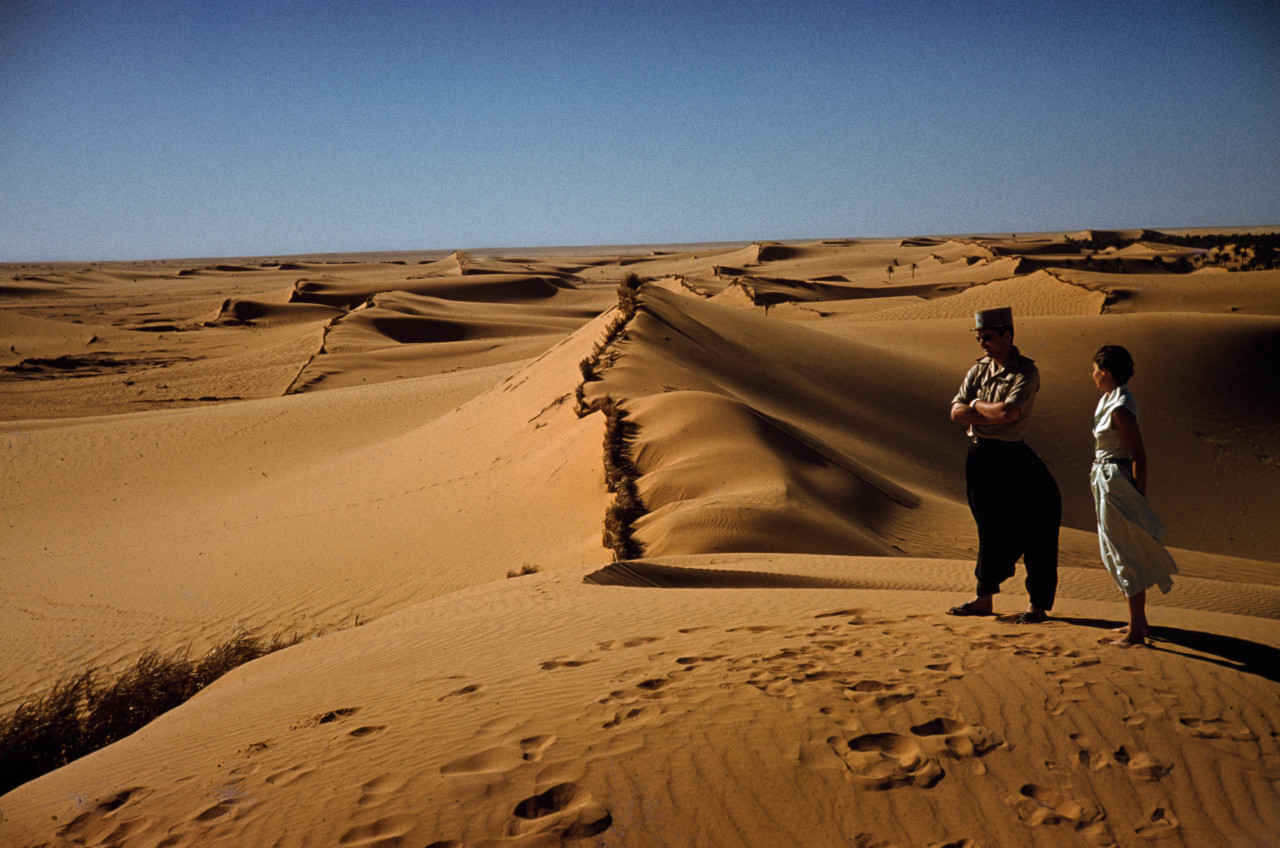 “Got up at 5:00 when it was still dark and I finished packing Mzuri, while Jinx got breakfast … We left at 6:30. What with the floods and sandstorms, even the good road leading out of El Golea was in appalling condition.” “In the ‘Oasis Rouge’ hotel we have the room once occupied by the Grand Duchess of Luxembourg … We did little during the day except rest-up after yesterdays arduous travel. In the evening we a took a ‘promenade’ through the terraced gardens of the palmeries and got several good pictures.” 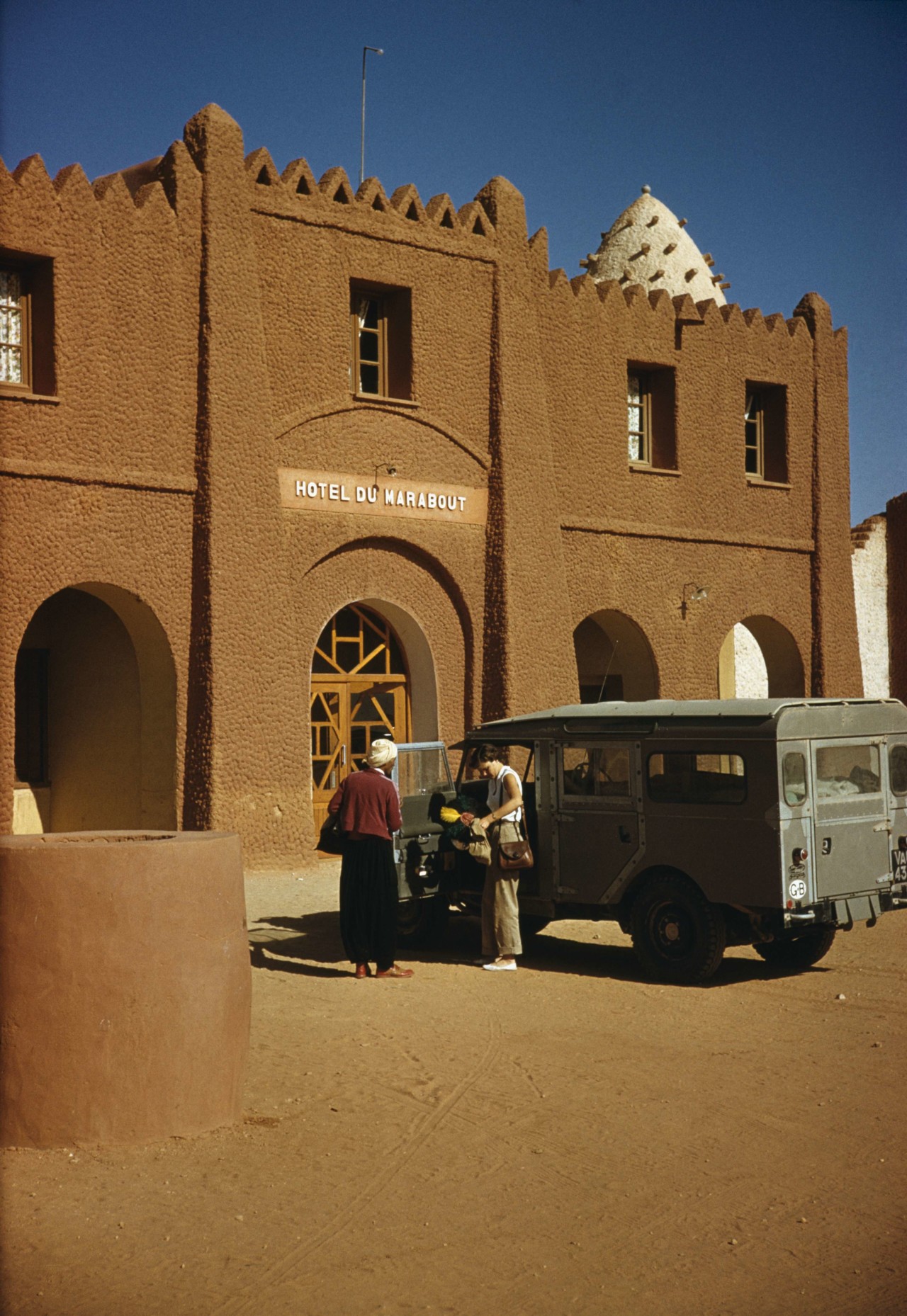 “After driving and driving through rather soft sand, we finally found the spot and dug up several good specimens of the ‘rose de sable,’ which are found just below the surface. But when it came to returning, we found that poor Mzuri was hopelessly stuck in the soft sand. We dug the sand away and used an ‘echelles’ but we only made a deeper hole and still couldn’t budge her. Finally at 9:30 a rescue party arrived and we finally got her out, to get back to the hotel at 10:00.” “Now that it is suddenly so hot our thirst is unquenchable. Maybe someday we will return to Timimoun – the rest of the Sahara I never want to see again. We were up early and on the route to Kerzaz by 9 a.m. Already the wind was messing around and there was sand in the air and a sickly sun.”

“We flew through the sand at remarkable speed, joined the Route Imperiale and arrived at Kerzaz at noon – only five hours on the road … We can now enjoy a quiet rest in the sleepy oasis of Kerzaz. Found a room in the tiny hotel and slept all afternoon. Boiling hot here. Too much sand in the air to take pictures so we went for a walk sans cameras. Came back and drank liters of water faintly flavored with Anisette.” “And now it is really warm. The summer heat has begun and everyone is complaining, we all have terrible thirst. I think it is time we left the Sahara.”

“We lost no time today: visited the Palmeries and villages with a local sergeant – Gautier by name. Took more and more pictures of picturesque Timimoun and spent all afternoon in the fantastic heat. And in the evening light we climbed the Tower of the Bordj and took even more pictures of Timimoun. At last this is one place that has not disappointed us. We will leave her with a happy memory.” 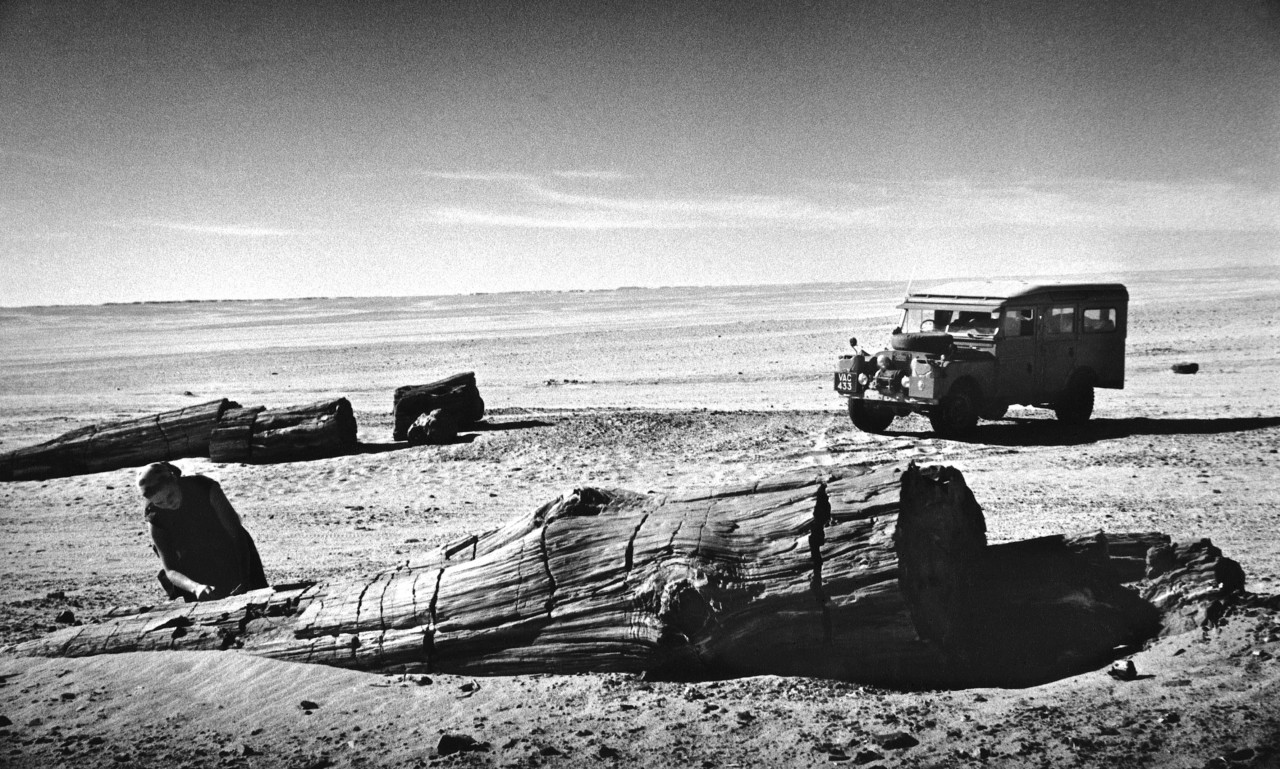 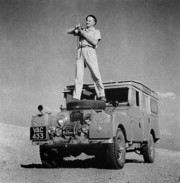