"The eye of the lynx and the craftiness of the fox" is how one colleague described him. Peter Hamilton pays tribute to Jimmy Fox, Magnum's former editor in chief, who has died, aged 86. James A Fox working through the early hours editing color material that had arrived late on Sunday evening. A colleague working with him that night wrote of him: "The eye of the lynx and the crafti (...)
ness of the fox.” Magnum Photos office, Rue des Grands Augustins, Paris, 1982. Image courtesy of J.A. FOX Collection.

James – better known as ‘Jimmy’ – Fox, who died on 18 June, was a greatly respected member of Magnum Photo’s back office for more than 30 years, and was both highly and universally regarded as a man whose memory for any given Magnum photographer’s work was remarkable.

He was also renowned for his unerring judgment for choosing the best and most relevant images from the rolls of film that, before the advent of digital cameras, were sent back to the agency from its roving members in their quest to document humankind and current events from around the world. He had an eye for pictures, but also where to place them, connecting the photographers to eager audiences.

The account of how he came to play such a vital role in Magnum’s history and for so long reads like an adventure story that began even before he joined the photo agency.

He was born in 1933 in Belgium, the son of a soldier who had served in the British army and then decided to settle near Ypres, working as a gardener for the Imperial War Graves Commission and then marrying a local woman, Adrienne, at the end of World War I.

The family fled for Britain when he was six years old, following the German invasion of the Low Countries in 1940. Fox later recalled the traumatic experience trekking to the French coast, braving the constant attacks of German aviation in order to finally find a boat to reach safety in England – a trauma that stayed vividly with him for the rest of his life.

After living in North London for the duration of the war, the family returned to Belgium in 1946, where Fox went to a French-speaking school until he was 17, and then came back to England again following the death of his mother in 1952. 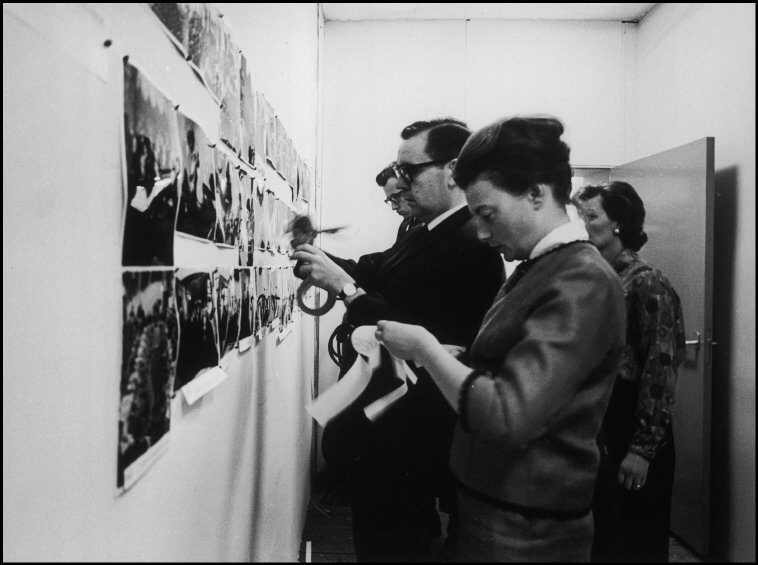 Prior to joining Magnum Photos, Fox started his photographic career in 1958 at the NATO headquarters in Paris. He is seen here at a NATO Defense Ministers meeting in Amsterdam in 1963, displaying o (...)
n the press board his editing of photos available to the press. Image courtesy of J.A. Fox Collection. 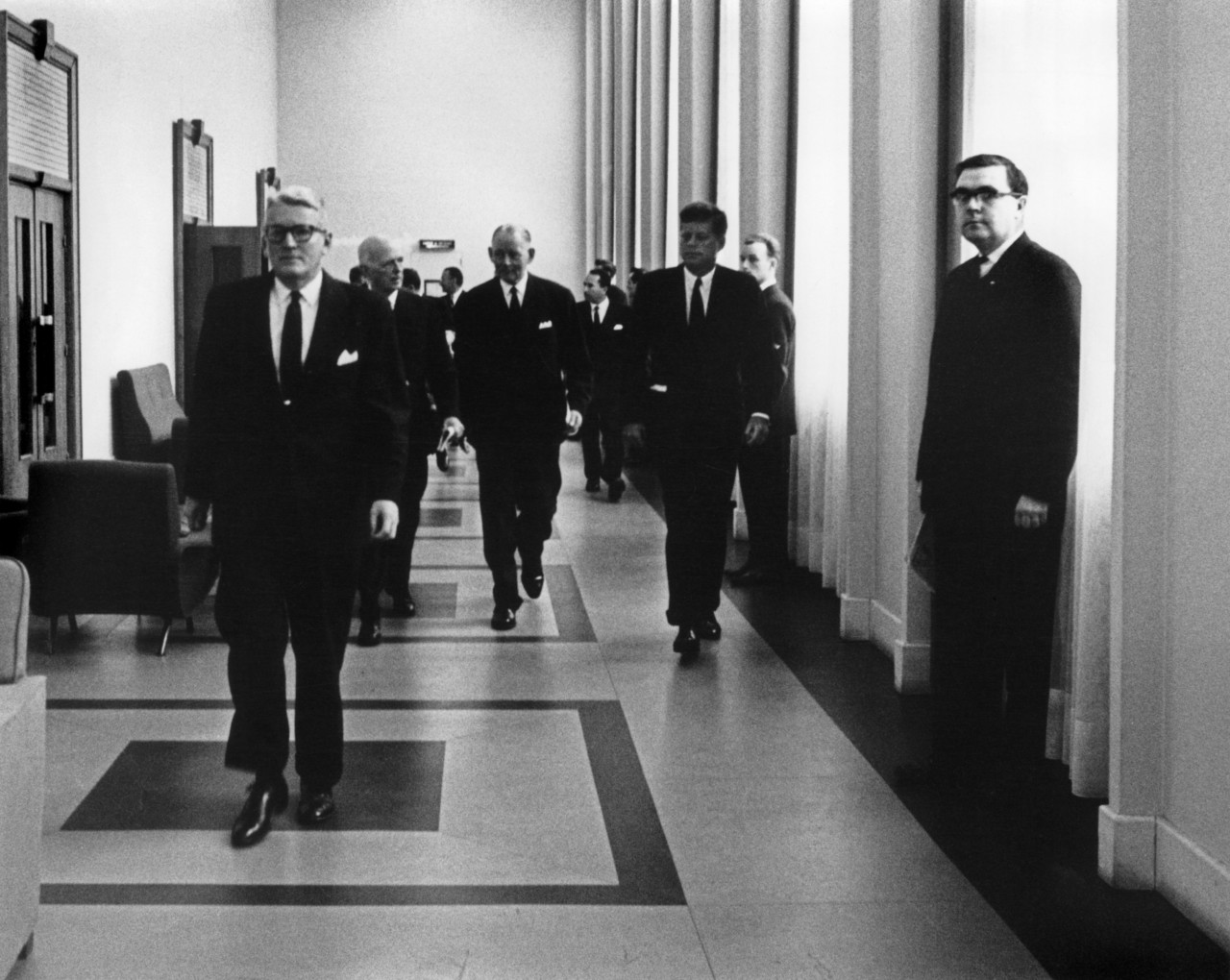 President John F. Kennedy visiting the North Atlantic Treaty Headquarters, seen here talking with the American Ambassador permanent representative to the NATO Council on the left. In the center is (...)
the NATO Secretary General, Dirk Stikker, and standing on the right along the windows is James Fox (wearing glasses) of the NATO Information Service Photo Bureau. Photo courtesy of the NATO Information Service, Paris, 1961.

The benefits of a multi-lingual background (he was already fluent in English, French and Flemish) were evident when he was called up for national service with the RAF. He was posted to Paris to work at the Supreme Heaquarters of the Powers in Europe in 1953, and it is evident that his intelligence and visual abilities were already being recognised as he acquired a passion for photography that took him on to NATO’s own press service in 1956. It was here that he first began to acquire the skills and exceptional eye he later became known for, working with photojournalists and their agencies.

It was Robert Capa’s brother, Cornell, who first saw Fox’s potential value to Magnum, asking him create a photo library in the New York Office in 1966. The five years he spent there were clearly formative for both the agency and Fox himself, marking the beginning of the reputation he would forge as an astute and highly respected picture editor. And during this time he had also begun his own if private love-affair with the camera and the practice of photography itself.

Half a decade of work for Magnum in New York were followed by his return to Paris in 1971 as a photo editor for Encyclopaedia Brittanica, and soon after as a founder-staffer at Sygma’s new photo agency. However, Magnum soon came calling again, and by 1976 he was senior editor in the Paris office.

It was, in one sense, the job that all his previous experience had prepared him for. Not surprisingly, perhaps, by this time his reputation as an outstanding editor and astute selector of images had begun to propagate throughout the world of Magnum, and Henri Cartier-Bresson, one of the cooperative’s co-founders, was instrumental in ensuring that the French office now had the best of photo editors.

Ian Berry, who worked often with Magnum Paris was greatly impressed by Fox’s abilities in selecting the best images from rolls of film without needing to contact the photographer who might well be unreachable for weeks or months on end in a location without functioning phone lines. “I could always trust him to pick the key images from my films, and make sure they got used in the best way.” 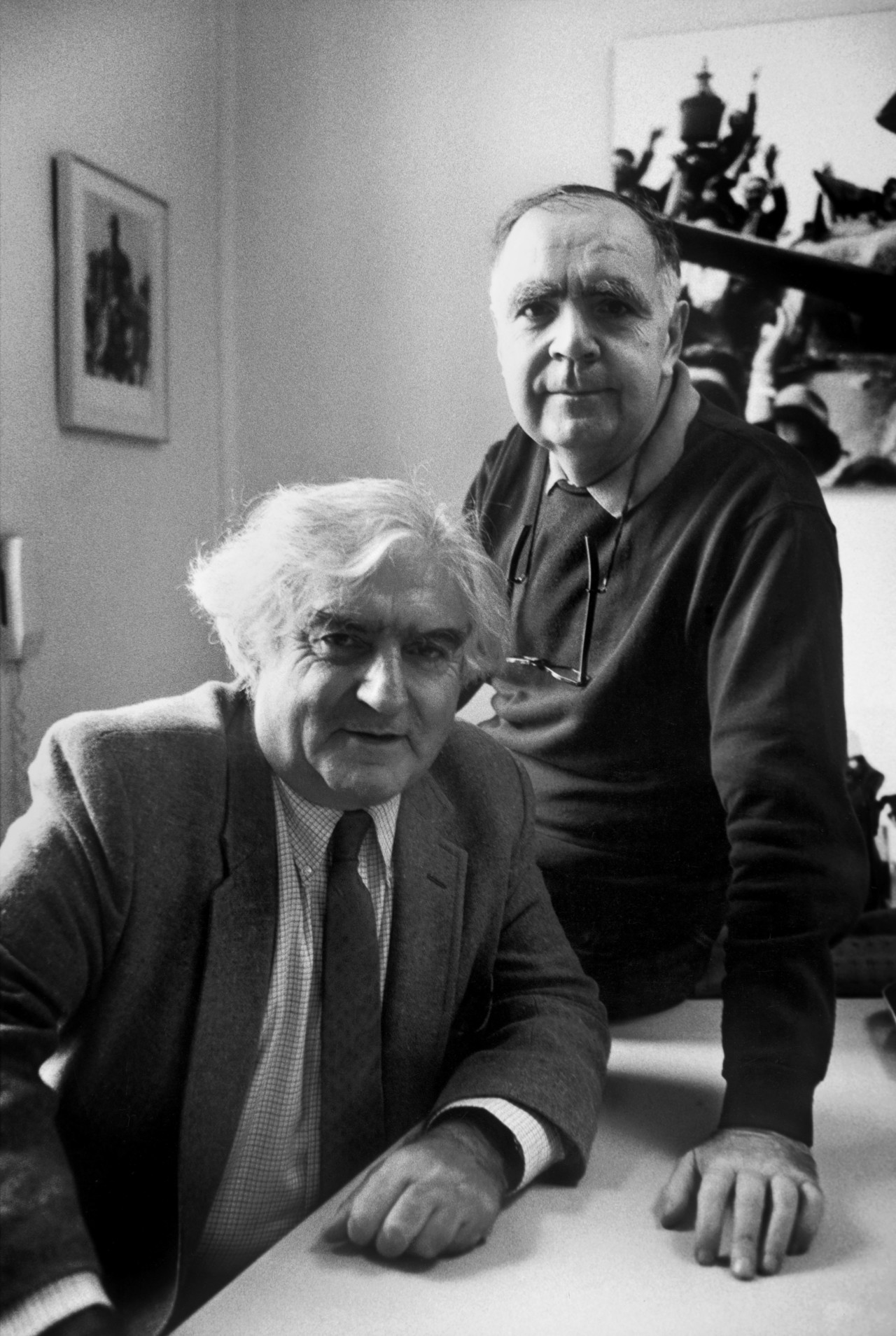 "I was in awe of Jimmy, even a little afraid. Twenty years my senior, he had worked with some of the world’s greatest photographers." 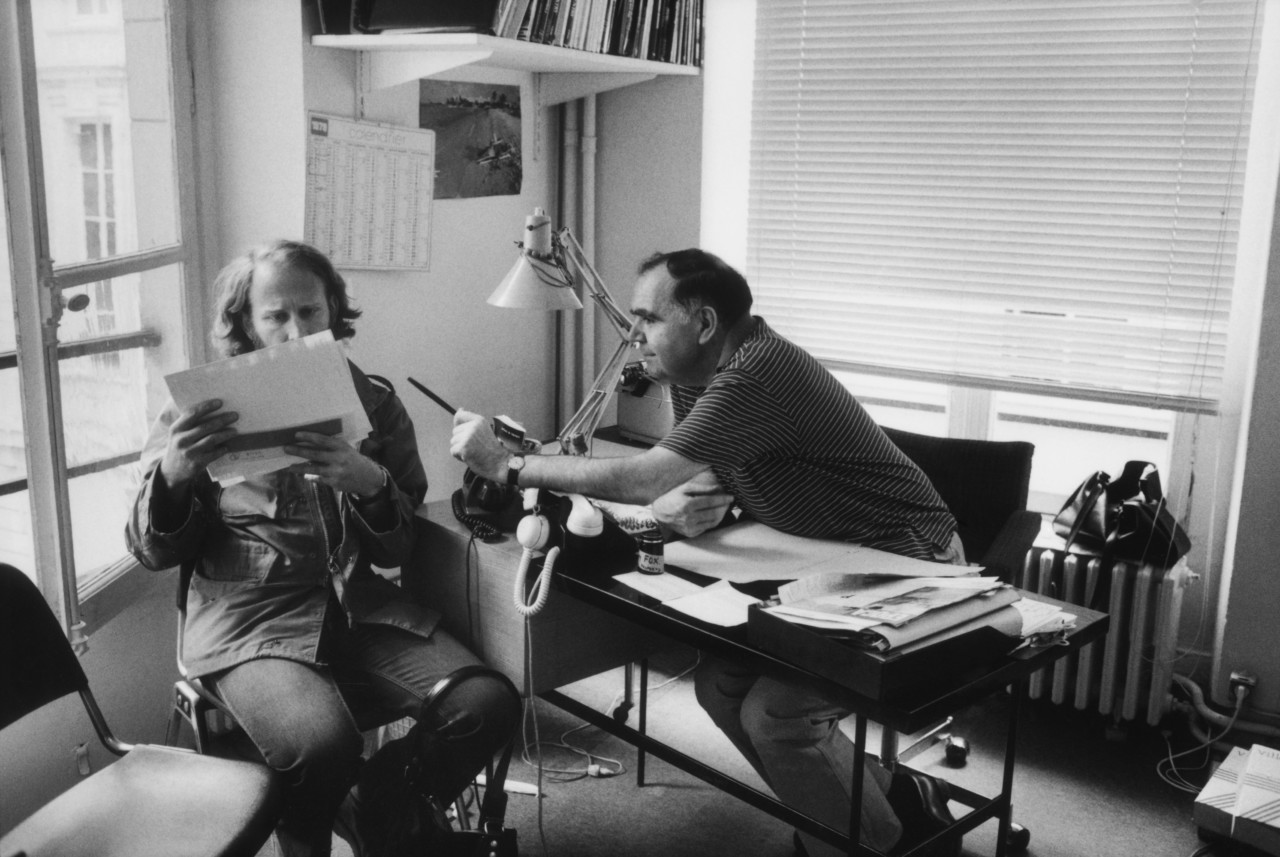 It is evident that Fox forged close ties with the agency’s photographers, and also the other ‘behind-the-scenes’ staff in the Paris office. Naima Kaddour, who worked alongside Jimmy up to his retirement from the agency in 2000, found him an inspirational photo editor who always seemed to have a very clear idea of which media outlets were best suited to particular images and stories. But Fox was not just a key intermediary in the processes, as Neil Burgess, who worked in Magnum’s London office, recalls.

“In the early 1970s, when Jimmy worked for Sygma, he reviewed the work of and recruited a young Brazilian photographer called Salgado,” wrote Burgess in a tribute that was intended for a Spanish magazine but which was never published. “And it was Marc Riboud who in 1978 called on Jimmy to run the Magnum distribution service that syndicated the work of the growing international family of social-documentary photographers.

“When I first joined Magnum as the Founding Director of the first London Bureau in the mid 1980s, I was in awe of Jimmy, even a little afraid. Twenty years my senior, he had worked with some of the world’s greatest photographers, and he brought the newsroom brusqueness to his work. My young assistant never quite got used to answering the phone to Jimmy, who without any introduction would just demand, ‘Neil’!” 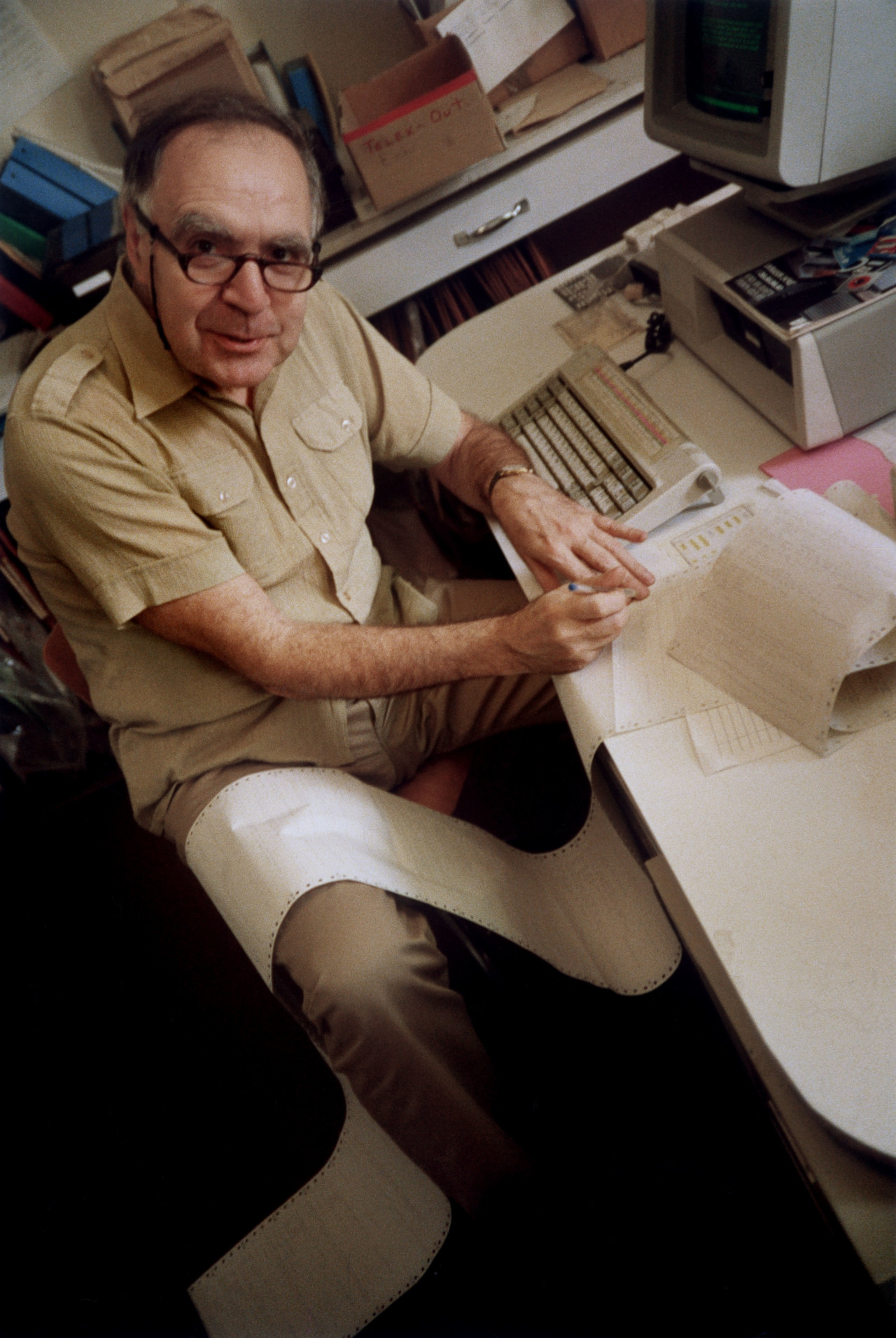 Fox uses the old telex and the newly arrived computer to reach photographers, agents and magazines around the world. Paris, 1986. Image courtesy of J.A. Fox Collection.

Berry says that Fox could always be trusted to treat the rolls of film photographers sent back to Paris with the utmost respect, both in terms of processing and editing, and their subsequent publication – a set of tasks impossible to organize from the field, thousands of miles from their point of arrival, and something only a gifted and empathetic picture editor could accomplish.

It is also clear from my recent conversations with both photographers and Magnum staff that Fox, when working to tight deadline, could be an abrupt, impatient and demanding editor. But he was appreciative of efficiency and hard work and, as I learned, always ready to share his knowledge and a joke with people who were trying hard to keep up with him.

“Juggling the work of 20 or 30 photographers at a time is a tricky business for anyone,” wrote Burgess. “Taking the responsibility of shipping film in and out of the field where photographers work can be stressful and demanding in itself and being trusted to oversee the processing and editing of the work is not something any photographer gives up lightly.” 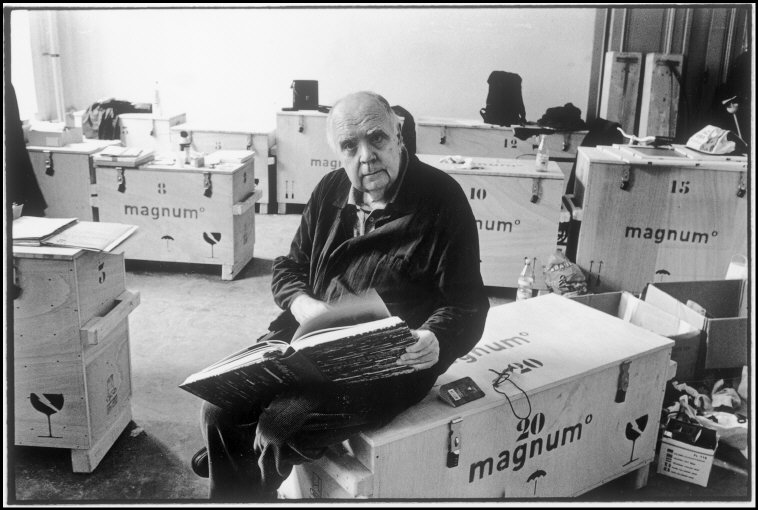 Fox filmed for a French-German documentary, ‘The Eye of Magnum’ about his career at the agency. The packing crates are full of frames and books for the ‘Magnum°’ exhibition, which was being inaugur (...)
ated. Photo courtesy Ilker MHGA/production TV Team, courtesy of J.A. Fox Collection.

To this day, there are staff working behind the scenes at Magnum who are excellent photographers in their own right. Many choose to hide the fact. Fox was different if discreet, in that he had a strong commitment to his own photography, although another intervention from Cartier-Bresson gave him the encouragement to photograph his interest in the world of boxing, something he had followed as a private pursuit for many years.

The result created a most impressive body of work about boxing both behind the scenes and in the ring itself, appearing in 2001 in a magnificently printed large-format hardbound book published by Thames & Hudson under the title, Ringside: The Boxing Photographs of James A. Fox” which was and still is widely seen as a tour de force in its field.

I had the opportunity to meet him in Paris shortly after the book had been published, and to be introduced to this “recently birthed offspring” by the man himself, who was quite clearly immensely proud of it. With good reason.

When Fox died recently, at the age of 86, a vital force in the lives of so many photographers and their archives disappeared forever. Yet his life and career will live on in the many photographs, books, exhibitions and even advertisements that he helped to bring into being as the vital intermediary between photographer and the published image.