Diana Dolev, the daughter of Capa's former partner, reveals previously unseen images that Robert Capa and David Seymour took of her family, and talks about her encounters with the photographers

After covering the 1948 war in Israel, Robert Capa (1913–54) took a series of photos depicting life for Jewish refugees in the transitory absorption camps (maabarot) that sprang up across the country between 1949 and 1950. The photos were published, with a text by Irwin Shaw, in Report on Israel (Simon & Schuster; 1950).

In 1950, Capa also directed The Journey, a United Jewish Appeal (UJA) propaganda film. The Journey opens in the northern Israeli port of Haifa with the arrival of Jewish survivors, refugees and immigrants from Europe and North Africa. The film goes on to depict their stay at the nearby Sha’ar Aliya (‘immigration gate’) referral camp, before closing with a segment that unfolds on an UJA-funded agricultural settlement (where some of the newcomers would remain) and a request for donations.

Although the film featured mostly documentary material, a professional actress was supposed to play the role of referral clerk in the Sha’ar Aliya camp. When the actress failed to show up on the set, Capa called his then girlfriend Shulamit Branitzky (1924–2014), and asked her to step in for the missing actress, although she had no acting experience. Pita, as she was nicknamed, was my mother. 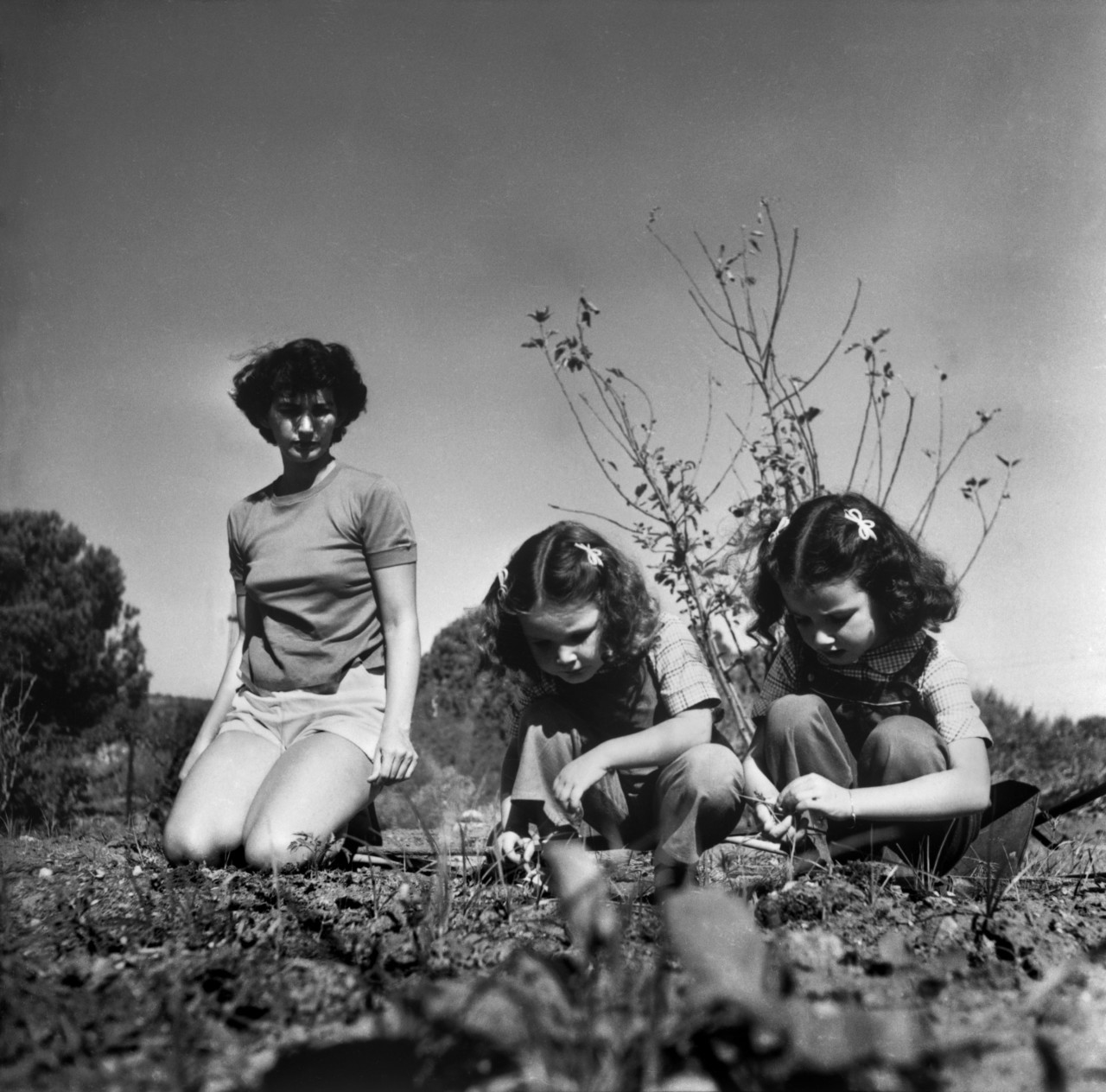 About fifteen years ago, as a birthday surprise for my mother, I got hold of a video of The Journey from the Steven Spielberg Jewish Film Archive at the Hebrew University on Mount Scopus, Jerusalem. The family gathered around to watch the film – nowadays available on YouTube – and there she was, my young mother, telling a young immigrant that, before he could fulfil his wish to study at the Hebrew University, he must first learn Hebrew.

At the time The Journey was shot, university activities had been temporarily transferred to various rented flats and monasteries throughout West Jerusalem. The scene featuring my mother ends with the frustrated young immigrant standing in front of what is supposed to be the barbed wire fence around the deserted Mount Scopus campus, which he is forbidden to enter). Watching the scene closely so many years later and having written a book about the planning and building of the first campus on Mount Scopus (Lexington Books; 2016), I decided the time had come to tell the story of the family photos in my possession, taken by Robert Capa.

My mother, Pita, came from a very different background and milieu to the subjects of Capa’s photography in Israel. She was born in Tel Aviv in 1924 to Henny and Shimon Branitzky, both born in Rishon Le’Zion, one of the first Zionist settlements in Palestine. The family moved the 65 miles north to Haifa when Pita was a young girl. They were a well-to-do family, and Pita enjoyed a comfortable life at a time of turmoil and war.

In 1944 Pita married Peter Woolfe Rebuck, a Jewish officer in the British army stationed in Palestine. The home of Pita’s parents, a spacious house atop Mount Carmel, was also home for the young couple and, later, for me and my younger sister Ilana. In 1948 Pita and Peter divorced, with Peter returning to England.

I suppose my mother and Robert Capa met in Haifa sometime between 1948 and 1950. Renowned for her beauty and charm, Pita caught Capa’s attention and they became a couple. In 1950, the family moved to another spacious house in Binyamina, a small village (moshava) halfway between Haifa and Tel Aviv. I guess Haifa was Capa’s base, and Pita too spent most of her time there once she had finished her work for the day managing her father’s new petrol station near Binyamina (the only petrol station on the Tel Aviv–Haifa road at the time).

Capa visited our family home in Binyamina at least once. During that visit he took pictures of my mother, my grandmother, my sister and me. Pictures of the family were never on display in the house and my mother kept the photos that Capa took – most of them in the form of contact sheets – in a cabinet drawer together with other family photos.

The unsigned, never-published images are in my possession now, or rather what remains of them, as the numbering shows there must have been many more. The images depict the three of us in the garden next to a small fish pond; in others we are gardening. A few photos of my grandmother and my sister were taken indoors.

I know these scenes were staged. Missing from the frames, after all, is Shelagh Robb, the Irish nanny, who dressed us up in our finest clothes for the fish pond photos and then in a different outfit for the weeding scene.

Nevertheless, we witness a moment here which Capa took for his own pleasure. And yet the photos bear layers of political significance, especially in light of Capa’s published oeuvre: the enormous gap between the different populations and sectors in Israel at the time, including the immediate Binyamina vicinity (what other Israeli household had a nanny from the British Isles at that time?); the privileged life of well-established Jewish families; the luxury of spending time in the garden for recreation rather than for the necessary production of food supplies.

After completing his assignments in Israel, Capa left for Paris, where he and my mum met once more when she was en route to London for a short visit. They hung out in nightclubs where he introduced her to old friends of his, among them Humphrey Bogart, Lauren Bacall, Gene Kelly and Ingrid Bergman. Their parting was no drama, my mother recalled. “It was fun while it lasted” was all she said when asked about their relationship. What impressed her most about Capa, she said, was that he was extremely warm and friendly, addressing both a celebrity and the cleaning lady with his full attention.

Shortly after Capa was killed in May 1954, photographer Chim (David Seymour) visited us in Binyamina. My mother probably first met him in 1950 when he, too, visited Israel . I was old enough to remember Chim’s visit, partly since he was incredibly friendly. We all drove together to Tantura, where he took photos of my mother, Ilana and me. Tantura was a Palestinian Arab village on the coast, not far from Binyamina; its inhabitants had been driven out and dispersed during the 1948 war. My mother and her spouse, Naaman Stavy, whom she’d married in 1956, turned one of the emptied houses there into a summer retreat. I found a photo of my mother in that house, in the Chim collection at the Magnum archive (I remember he also took photos of her in the countryside, outside the village).

Typically, I think, Capa was an onlooker in my family photos; it seems that we are completely immersed in watching the fish in the pond and in the task of weeding, totally oblivious to the man and his camera. In Chim’s photos we are not only aware of his presence, but also interacting with him. So Chim’s photos are not simply depictions of us but also of the communication between us.

These private Capa and Seymour photos are publicly unveiled here for the first time. To this day Capa’s and Chim’s work arouses much interest, so this short text and especially the photos possibly provide more information to complete the photographers’ legacy. One may wonder, then, how incomplete archives must be, as hidden material undoubtedly exists in private hands, concealed from the general public, historians and researchers. “I wish to thank Hadassa Keren who introduced me to the Steven Spielberg Jewish Film Archive and insisted I should bring to light the story of the Robert Capa photos in my possession. Thanks also to my dear friends Diana Rubanenko, Tal Haran and Dr. Zvi Elhayani who kindly read the drafts for the article and made useful suggestions”

The Book of Veles: How Jonas Bendiksen Hoodwinked the Photography Industry