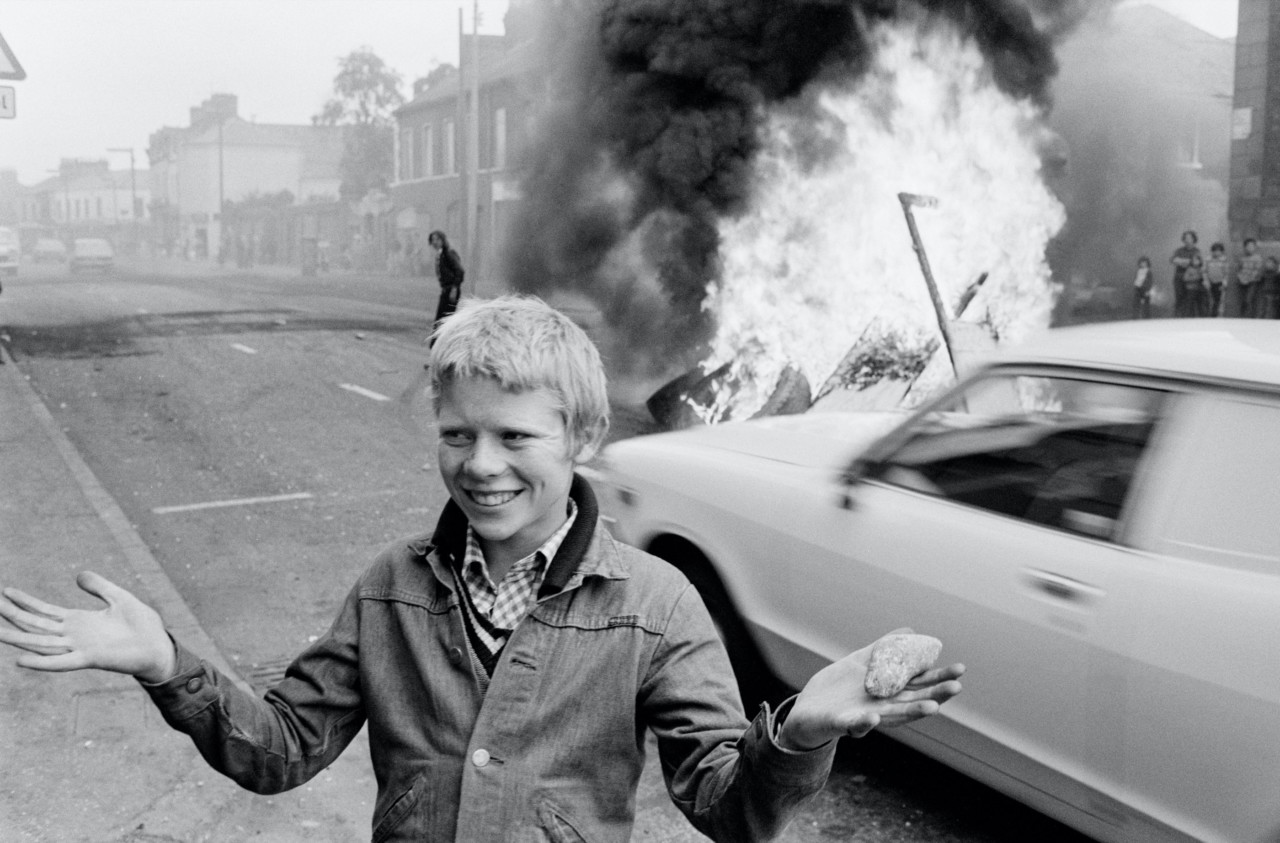 Magnum photographer Chris Steele-Perkins visited Belfast in 1978 to document everyday life against a background of conflict during the period of the Troubles. His new book —itself titled The Troubles— publishes Steele-Perkins’ classic images from the series, adding a series of interviews he conducted with subjects 40 years later, as well as 38 previously unpublished images from the time he initially spent there. Here, a selection of these rediscovered images appear, alongside Steele-Perkins’ own introduction from the book. Below, we also share a conversation from 2008 between Steele-Perkins and Owen Coogan, one of the subjects of the photographer’s original images.

You can pre-order The Troubles from Bluecoat Press here.

I came to Belfast in 1978 as part of a project looking at inner city poverty in the UK. The project consisted of three photographers, Nicholas Battye, Paul Trevor and myself, working as the Exit Group. We had some financial support from the Gulbenkian Foundation to cover basic costs. 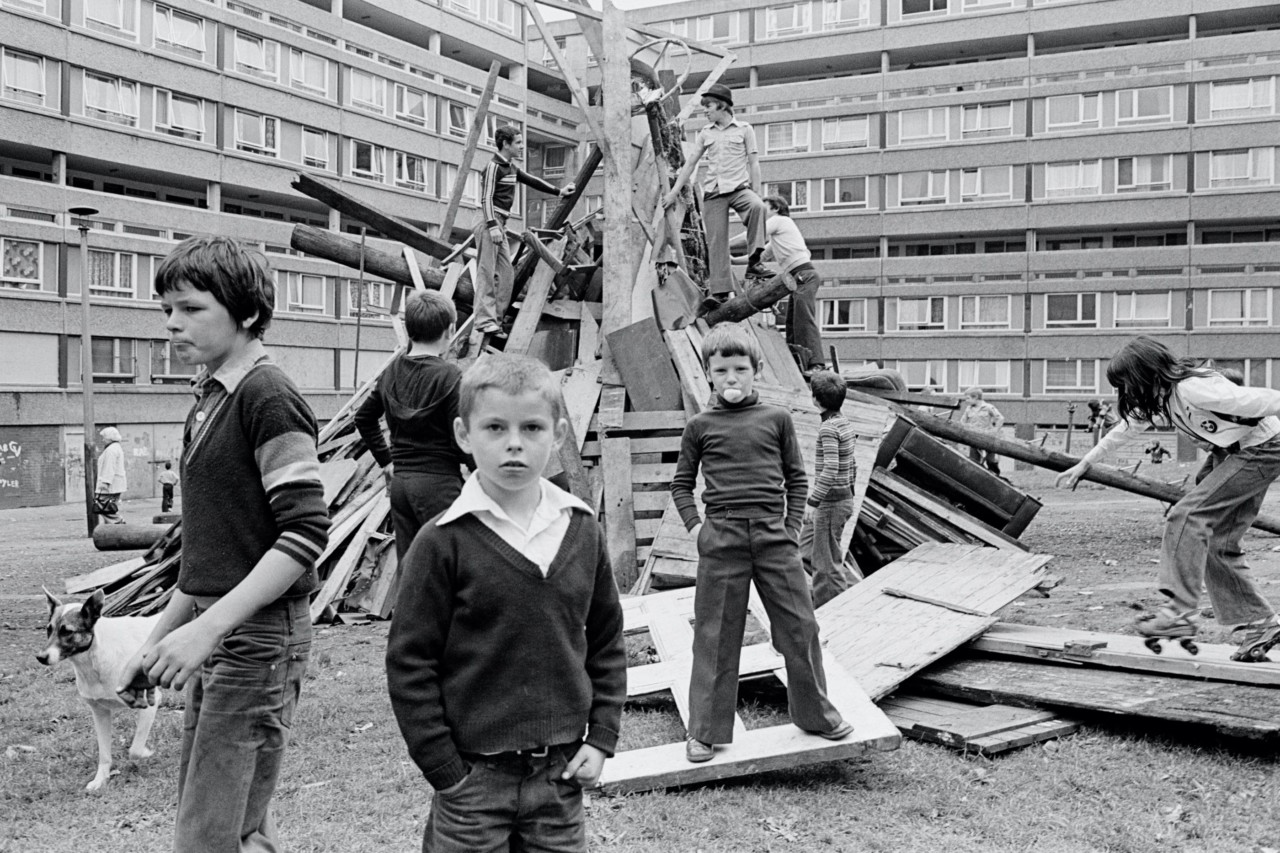 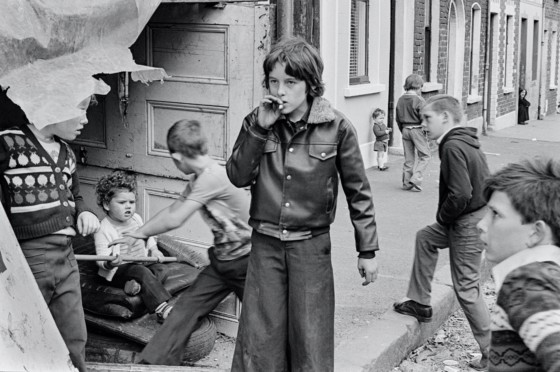 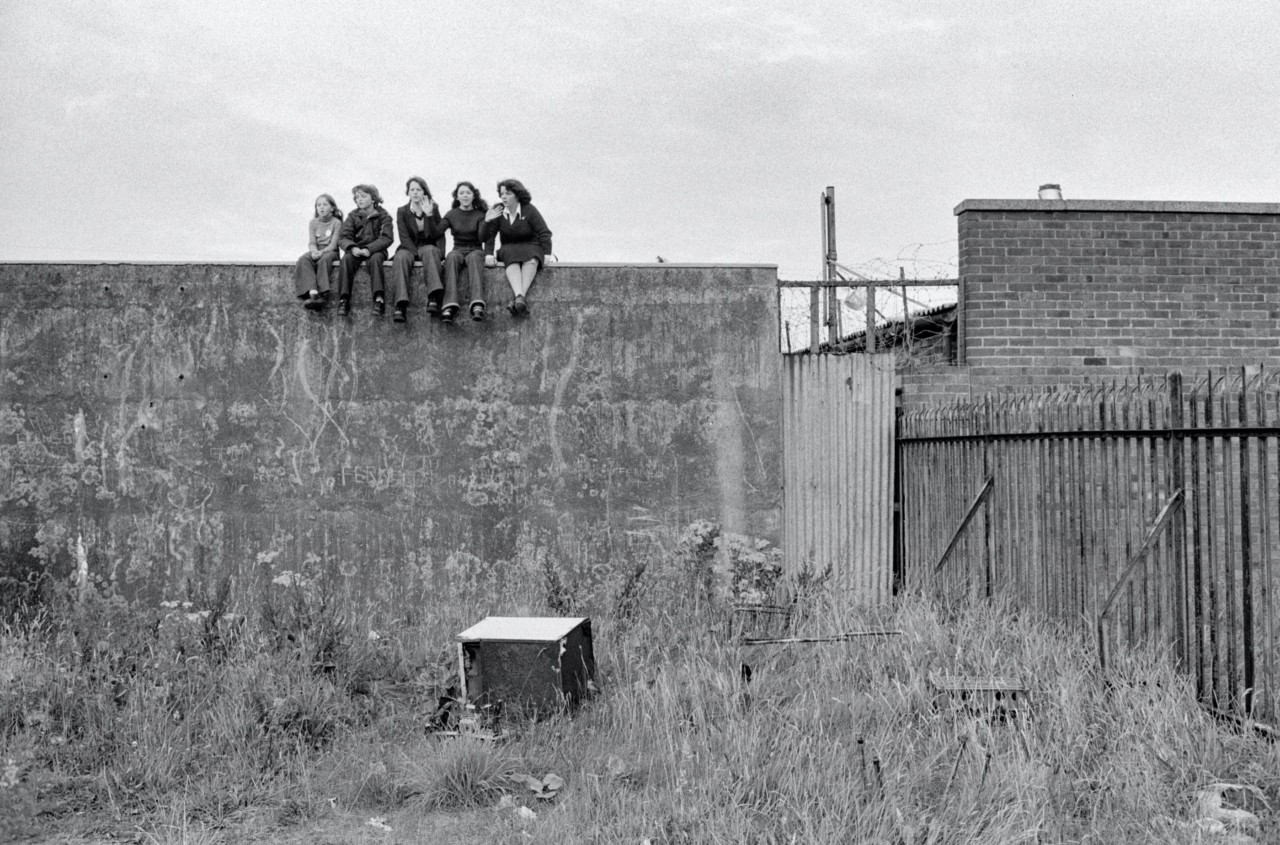 It was a time of great poverty and rising racism. Street riots and police violence were becoming a common occurrence in many of the cities in the UK and it seemed to us that these problems could easily escalate into a similar chaos as that which existed in Northern Ireland: a civil war with the army deployed in the streets.

Our analysis was simplistic; The Troubles were not driven by religion with the Catholics vs the Protestants, but that the Catholics were the natural majority of Ireland, a country separate from England, and English rule over Ireland was a colonial imposition that happened to be Protestant. Protestants were a minority in Ireland until an artificial Protestant state was created in the north by the process of gerrymandering: English rule was maintained through this artificially created, Protestant majority state called Northern Ireland. Wealth, policing, jobs, opportunity, property, were all controlled by Protestants, against whom the Catholics were forced to struggle. 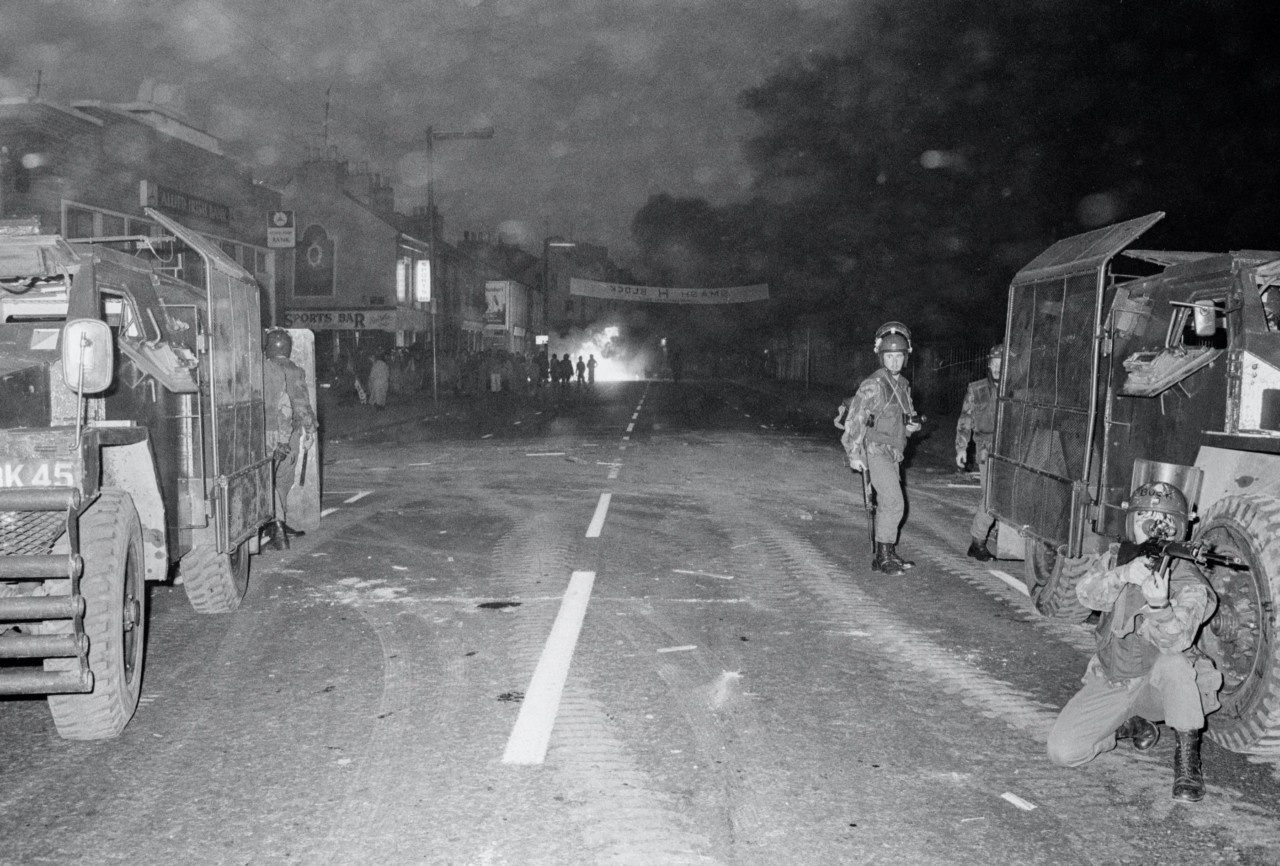 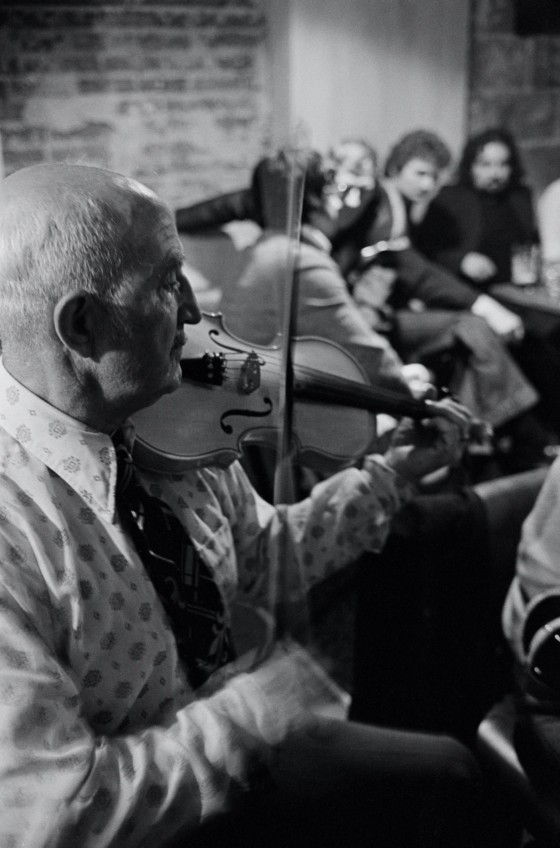 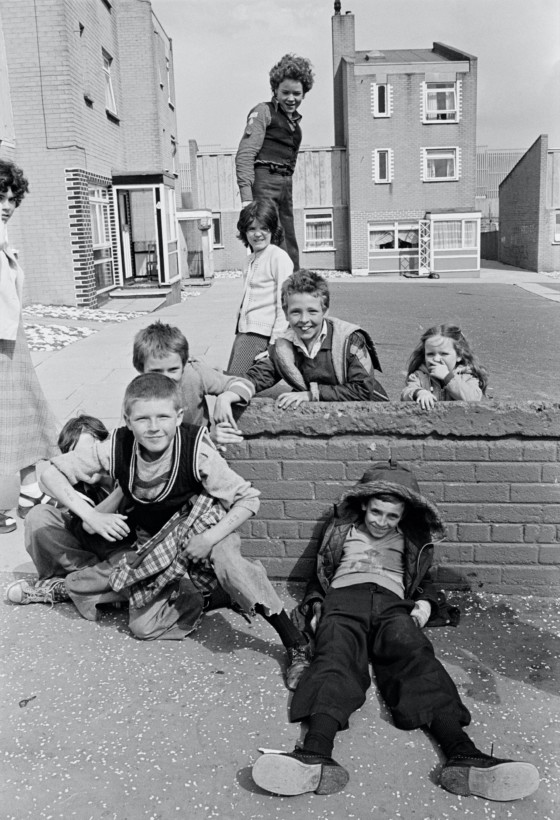 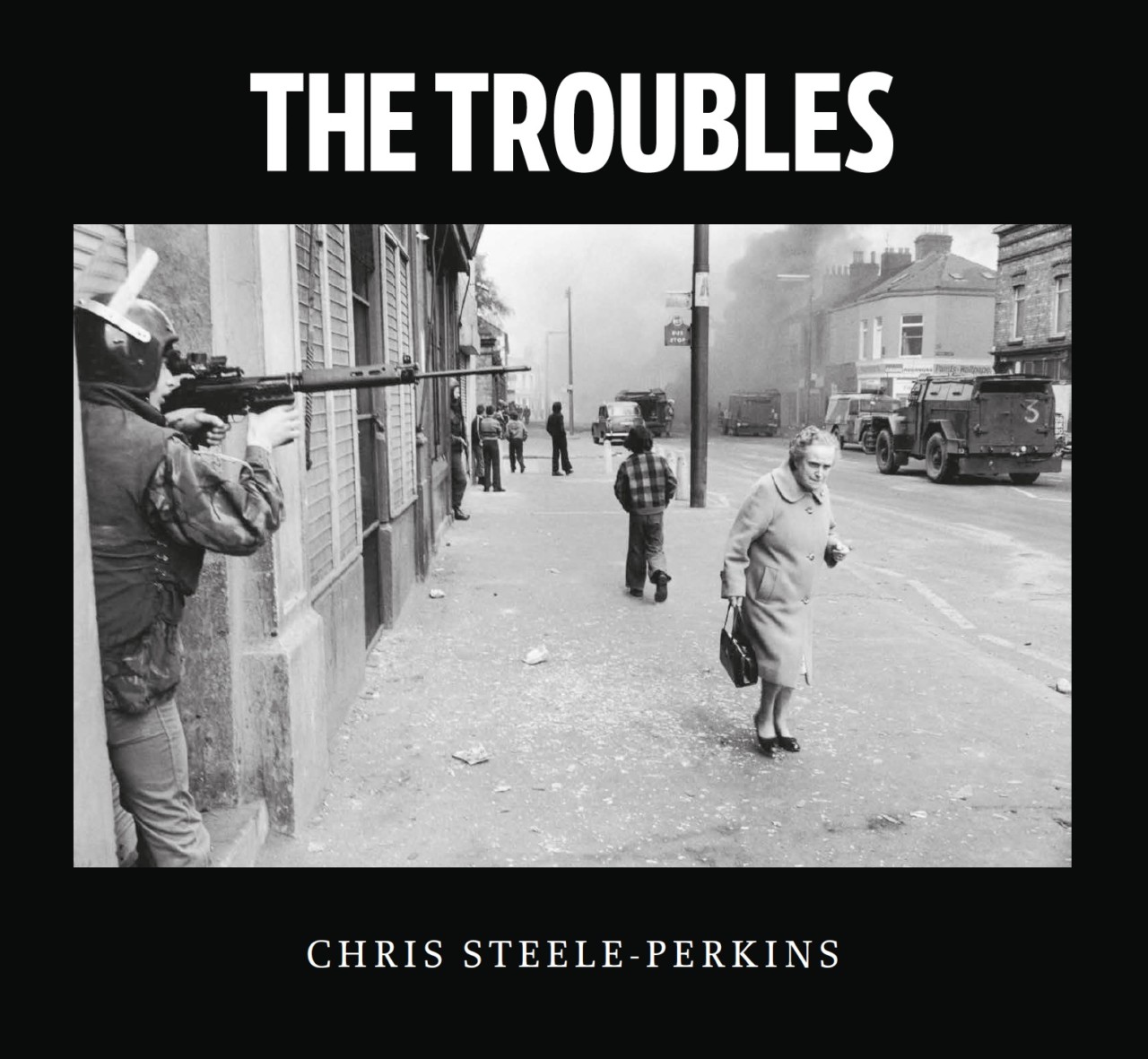 Cover of 'The Troubles' by Chris Steele-Perkins

To me, going to Northern Ireland was like going on an adventure, going to a war zone, so I packed my rucksack and camera bag and pitched up in the largely Catholic West Belfast. I intended to cover the situation from the standpoint of the underdog, the downtrodden: I was not neutral and was not interested in capturing it so. I was interested in how life was lived in its various facets, not just the rioting and the military occupation, though I couldn’t ignore that which was so prevalent, but also the leisure, the entertainment, the homes, the fun, the funerals and the community. I was not there to illustrate a thesis but to enter the unknown, interacting and responding, and attempting to remain honest.

When I arrived in Belfast I was lucky to meet a couple of lads who were squatting in Divis Flats, a new, soulless and unpopular Catholic housing development. They kindly offered that I stay with them for a while until I met Anne and Paul McCorry (who wrote the introduction to this book) and who offered me a bed in their family flat, also in Divis. I felt right at home. 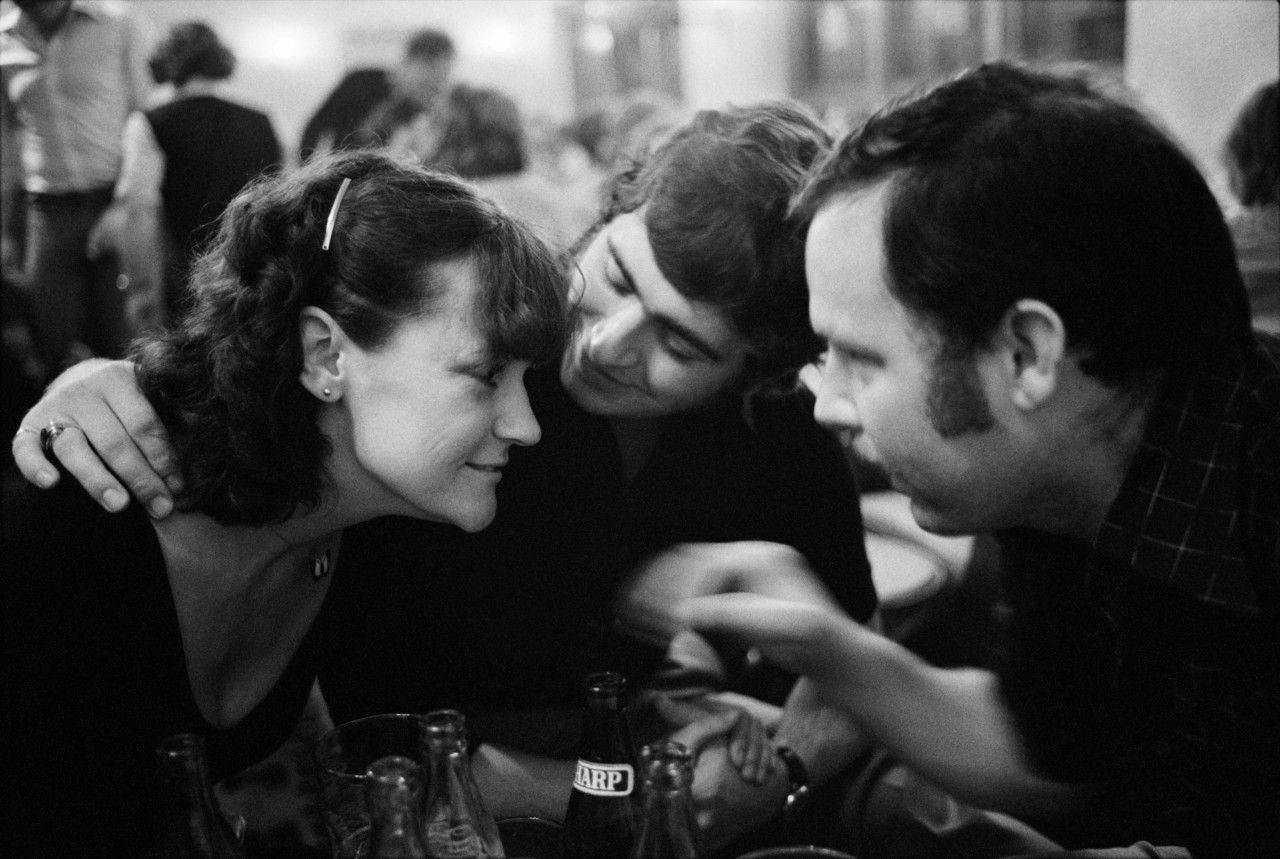 I take photographs, and photos explain nothing; they describe. These photographs go some way towards describing a Catholic community under attack by a largely Protestant community backed up by the British state. It was not until I went to Apartheid-era South Africa that I felt like I understood better the dynamics of Northern Ireland. The photographer Phillip Jones Griffith made some brilliant work on Northern Ireland and once said: “The conflict in Northern Ireland has provided a revealing study of the way the British State deals with an urban uprising. It is an unsavoury little war that seems to have more to do with providing basic training in counter insurgency techniques for the British Army than keeping the peace.” 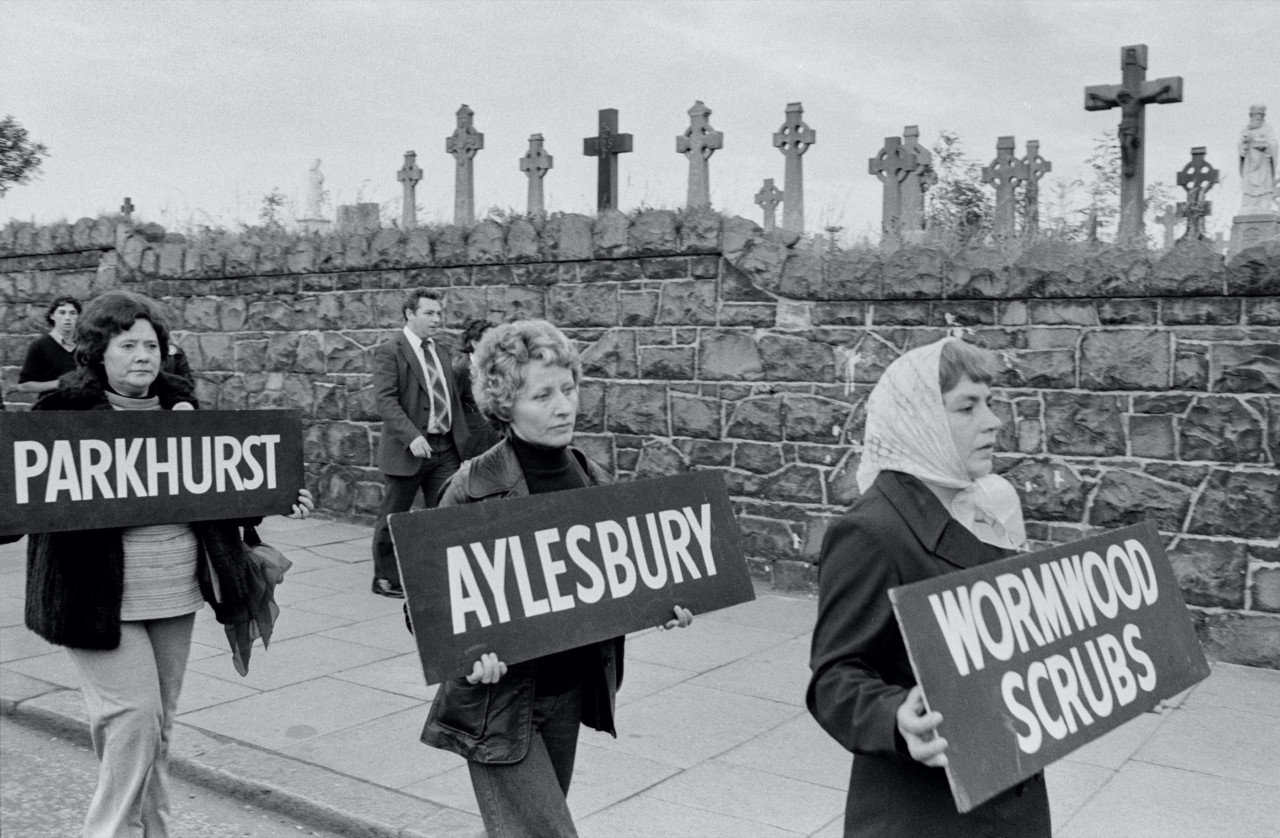 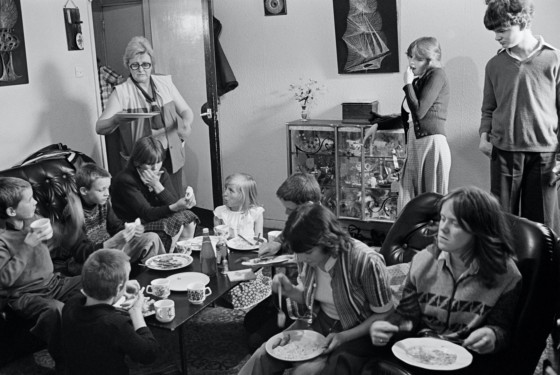 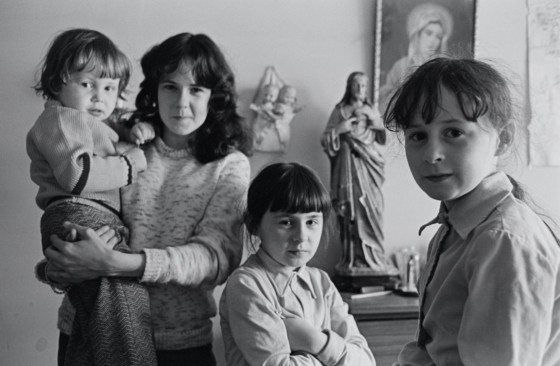 The work that I did for the Exit group was quite extensive. I stuck with the urban Catholic community in Belfast and Derry and continued to come back. In 2008, ten years after the peace accord known as the Good Friday Agreement, I went back to follow up what changes peace had made. I had an assignment for The Times to track down some of the people I had photographed in 1978, when I had first come to Northern Ireland, and to photograph and interview them. This work is part of this book and made me think about the many photographs I had taken around The Troubles that had never seen the light of day. Maybe some of those photographs surplus to the Exit project still had something worthwhile to add.

I began to see that my work in Northern Ireland had always been a celebration of the resilience and unyielding way that the Catholic community resisted. Despite the sectarian killings, despite the illegal process of internment, they stood firm and I felt respect for this robust spirit of endurance, tempered by humour. 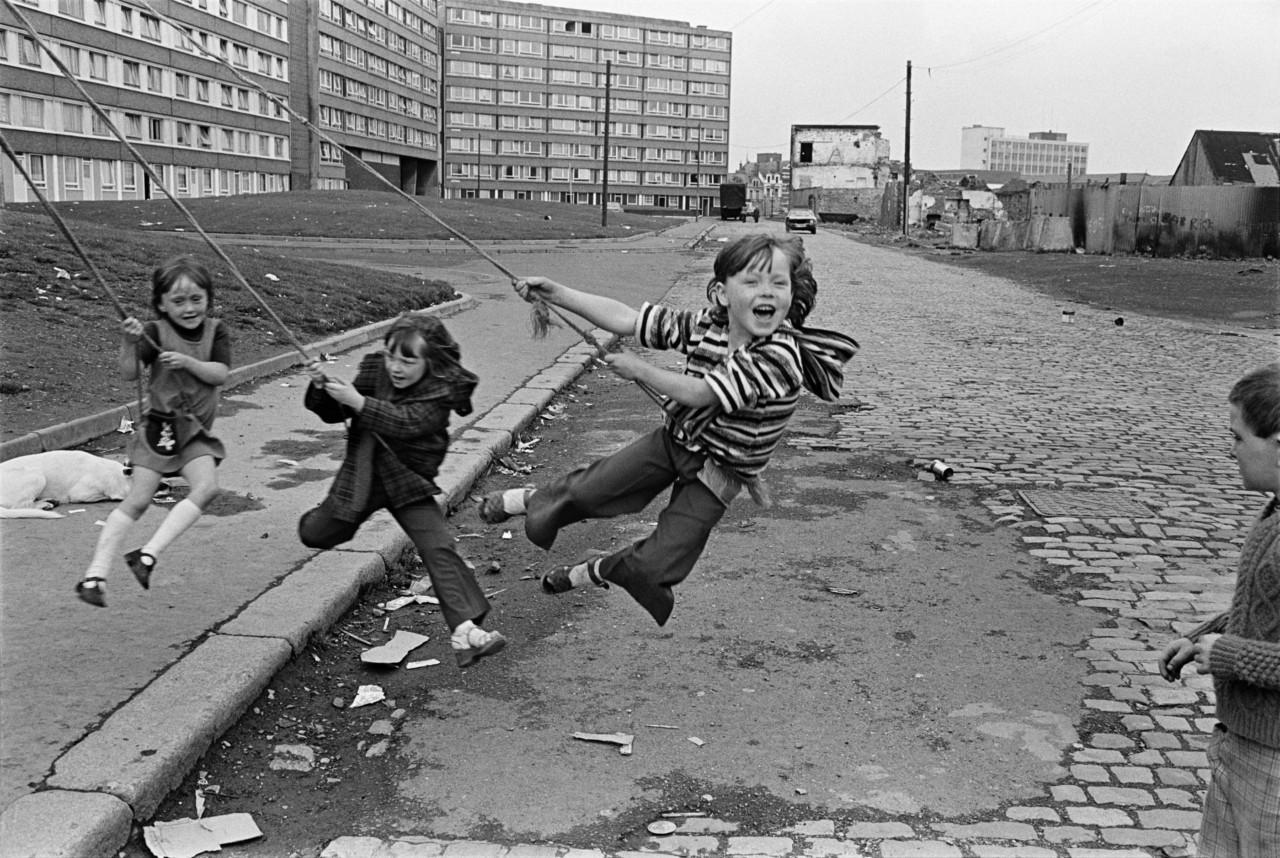 Owen Coogan was photographed on two occasions by Chris Steele-Perkins. First, in 1978, and again in 2008. In the former image, he is depicted as a boy wearing a striped jumper on the rightmost side of the frame. Steele-Perkins conducted the following interview with him in 2008. 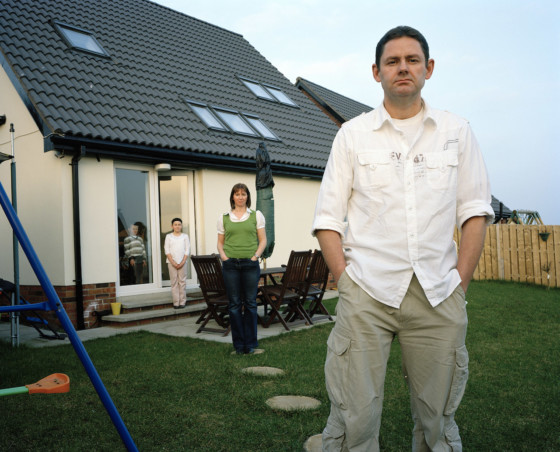 Chris Steele-Perkins: Could you tell me what life was like for you at that period?
Owen Coogan: It was good as a kid. The reason for the catapult, I think, is that in those days we didn’t get many toys, so we had to make toys ourselves, like catapults, gliders.

Chris Steele-Perkins: What do you remember about that area?
Owen Coogan: There were a lot of derelict houses at the time, which we used as our sort-of playground. We built a hut in one of the houses. For us it was great fun, just like an adventure playground.

Chris Steele-Perkins: At the time you were living in the Divis Flats. Did you enjoy it there?
Owen Coogan: It had a bad reputation, but for kids growing up, as we were, you didn’t know anything else. Because it was densely populated, there would be a large group of us who played together, maybe 30 or 40 people or more, so we had this camaraderie growing up, where everybody stood by each other.

Chris Steele-Perkins: How did the Troubles affect you at that age?
Owen Coogan: I think education-wise it affected me. Sometimes you couldn’t get to school because of what was happening around. Basically it was too unsafe to go out sometimes, so I’d say, right up until I left secondary school, it affected me.

Chris Steele-Perkins: At what age did you leave school?
Owen Coogan: I left school at 16 to help my father with his job – a roofing job for a few years. Then I got a job with North Irish Ferries, down in the docks area, as a weigh-bridge operator. From that, I went into security, including being a store detective, working down in the city centre. Then I got a job in Mackies down on Springfield road.

Chris Steele-Perkins: Mackies?
Owen Coogan: They made textile machinery. Mackies was the factory that Bill Clinton visited. So I was at Mackies right up until it closed in 1998. From that I continued on spray painting with a few local firms. At present, I’m at Montupet; we make cylinder heads for the world market.

Chris Steele-Perkins: The peace process; how does that impinge on your life?
Owen Coogan: Looking back, you can see how hard it was, growing up in the Troubles, but at the time you had to accept the situation. It was great that the peace process happened, and the momentum grabbed everyone and took everyone forward to a better place. The results are being seen even today. Having kids, and them growing up now, it’s totally different from when we were growing up. They’ve got so much more opportunities than we had at that time.

Chris Steele-Perkins: At that time, was your family political or involved with any of the groups?
Owen Coogan: I’d say most people, most families, were involved in some way. You were actually in this massive thing that was happening and the public eye was all on Belfast at the time. We felt like the Falls Road was under siege, so everyone sort of tried to do their bit. Even though you were young, you still knew what was happening.

Chris Steele-Perkins: Were you or any of the family ever arrested?
Owen Coogan: My father was interned in ‘72 for four years. That’s all. Even though I was young I can still remember him not being there for those four years. You can never take those years back.

Chris Steele-Perkins: Do you think the peace process is undoable?
Owen Coogan: It’s undoable, the momentum is going on and on. There’s still a lot of difficulties to go through though. There’s people talking about the Peace Lines going down but personally, I think it’s too early for that. There’s still tensions between the two districts but eventually it will happen. It’s just snowballed from the peace process. The amount of money that’s come into Belfast and other places in Northern Ireland is unbelievable.

Chris Steele-Perkins: Is there a mixed workforce where you work at Montupet?
Owen Coogan: Yeah.

Chris Steele-Perkins: Do you think that would have happened before the peace process?
Owen Coogan: It did happen because whenever I worked in Mackies it was a mixed workforce as well, while the troubles were still going on. There was a bit of tension, but there’s a vast difference from then to now.

Chris Steele-Perkins: Something you can feel?
Owen Coogan: Oh yeah, without a doubt you can feel it. It’s moved on tenfold.