Marc Riboud was born in 1923 in Saint-Genis-Laval near Lyon. In 1937 at the Exposition Universelle in Paris he took his first photos using a pocket Kodak given to him by his father for his 14th birthday. In 1944 he joined the resistance in the Vercors. From 1945 – 1948 he studied engineering at the Ecole Centrale in Lyon and started to work. Three years after he made the decision to become a photographer.

In 1953 his photograph of a painter on the Eiffel Tower appeared in Life Magazine. This was his first publication. Invited by Henri Cartier-Bresson and Robert Capa he joined Magnum Photos.

In 1955, he traveled by road through the Middle East and Afghanistan to India and stayed for one year. In 1957 he traveled from Calcutta to China making the first of what were many long stays. His road trip to the East ended in Japan where he found the subject for what became his first book, Women of Japan.

In 1960, after a three-month stay in the USSR, he covered the struggle for independence in Algeria and Sub-Saharan Africa. Between 1968 and 1969 he photographed in both South and North Vietnam, one of the few photographers allowed entry to both.

In the 80s and 90s, he returned regularly in Orient and Far East, especially Angkor and Huang Shan, but he also followed the rapid and considerable change of China, a country he had been looking at for thirty years.

In 2011 Marc Riboud made a dation in payment of 192 original prints made between 1953 and 1977 to the National Museum of Modern Art (Centre Georges Pompidou), Paris. His work has won many prestigious awards and is exhibited in museums and galleries in Paris, New York, Shanghai, Tokyo, and more.

Marc Riboud passed away in Paris, at 93 years old, on August 30th 2016. The core of his archives has been donated to the National Museum of Asian Arts – Guimet, Paris. 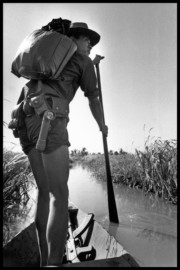