As Euro 2016 Kicks off, we present an edit that explores the synergy between football and religion 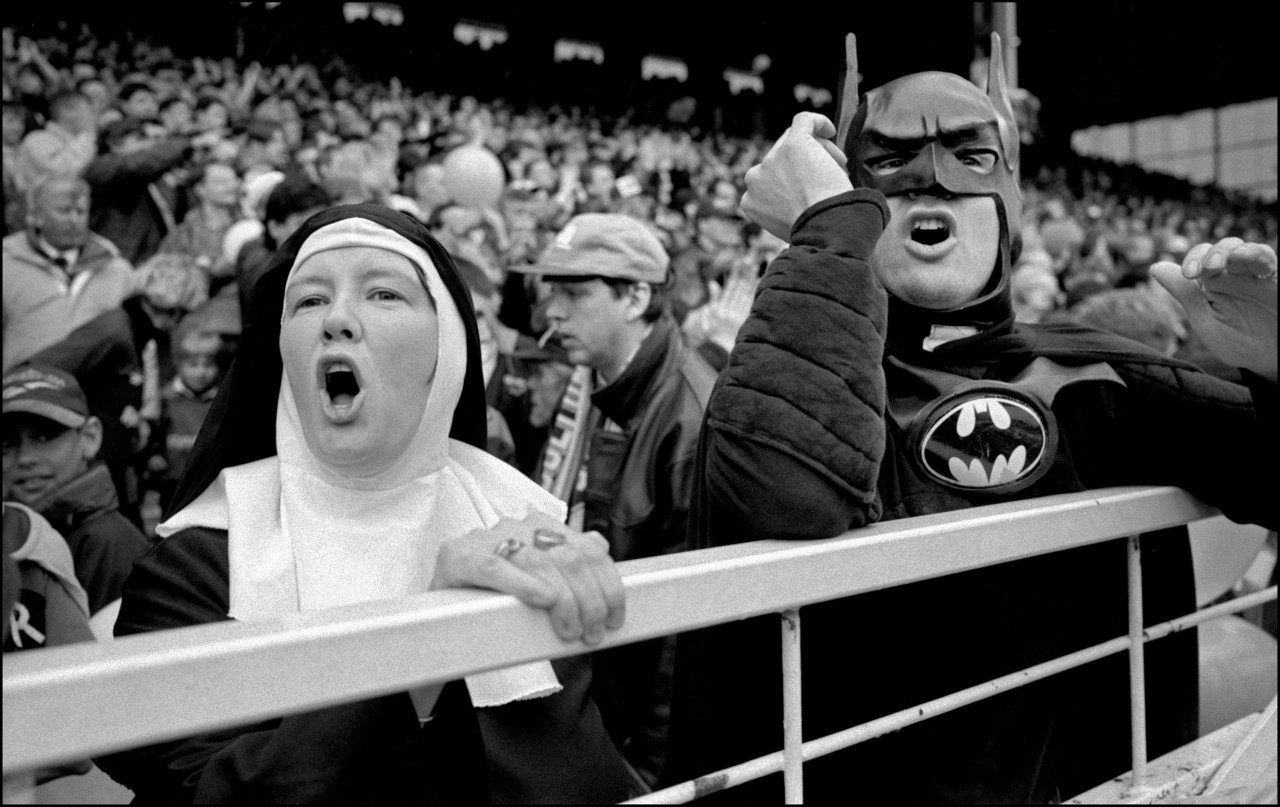 Moments caught by Magnum photographers over the years – presented here – build a global portrait of the spiritual reverence and religious-like worship of football: Diego Maradona is venerated with a small shrine in Paolo Pellegrin’s 2000 photograph from Naples, Italy, while Ferdinando Scianna’s 1986 study of Bolivia includes a portrait of a man with a wall behind him adorned with a poster of Leonardo da Vinci’s The Last Supper, depicting Jesus and his 12 disciples, alongside a poster of the national side’s 12 men-line-up. At the 1998 World Cup in Paris, John Vink shoots a Scotland fan, hands clasped together around a can of beer as if in prayer, eyes closed but head tilted skywards to God; Chris Steele-Perkins captures the devotion of a Newcastle fan whose devotion to his club has become a part of him, tattooed onto his body – a large portrait of Christ with a crown of thorns is flanked by his team’s crest and mascot, the magpie. 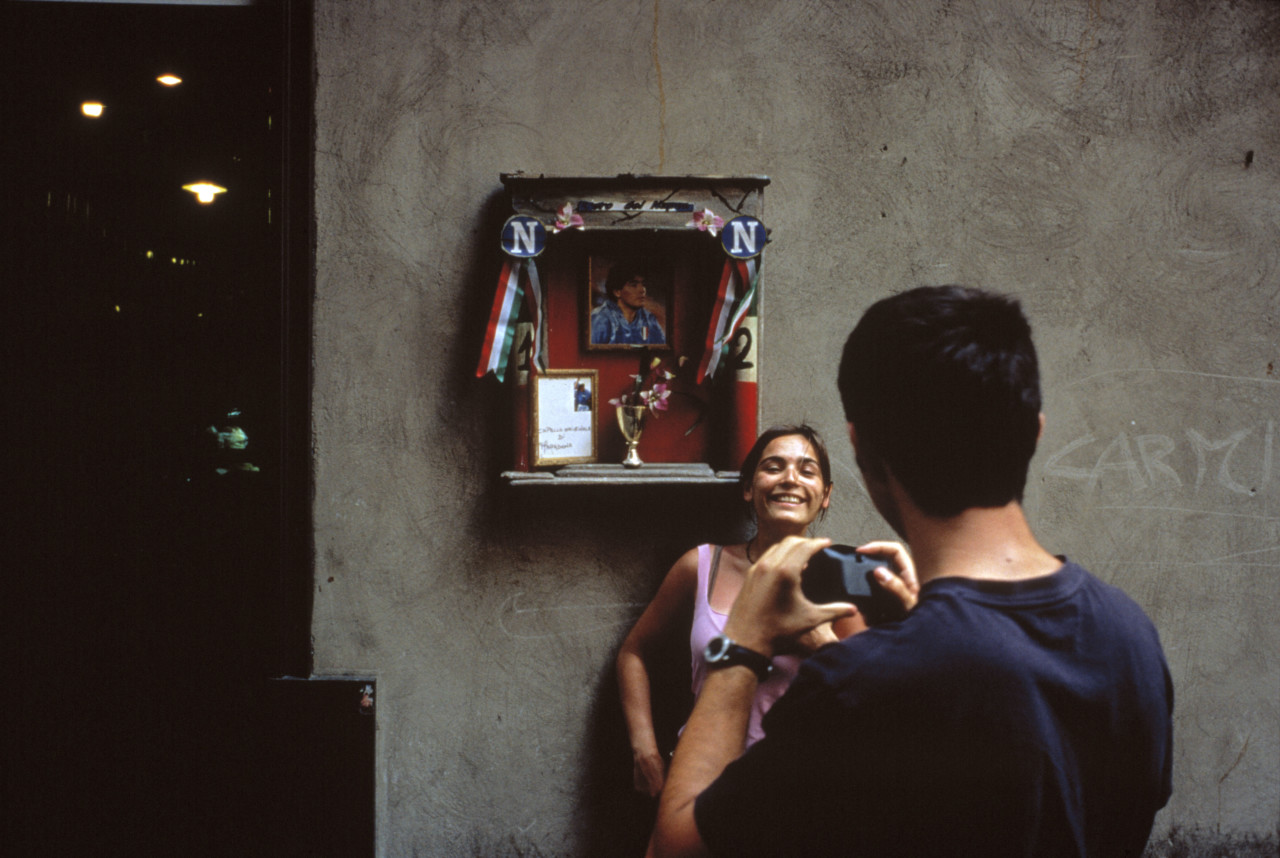 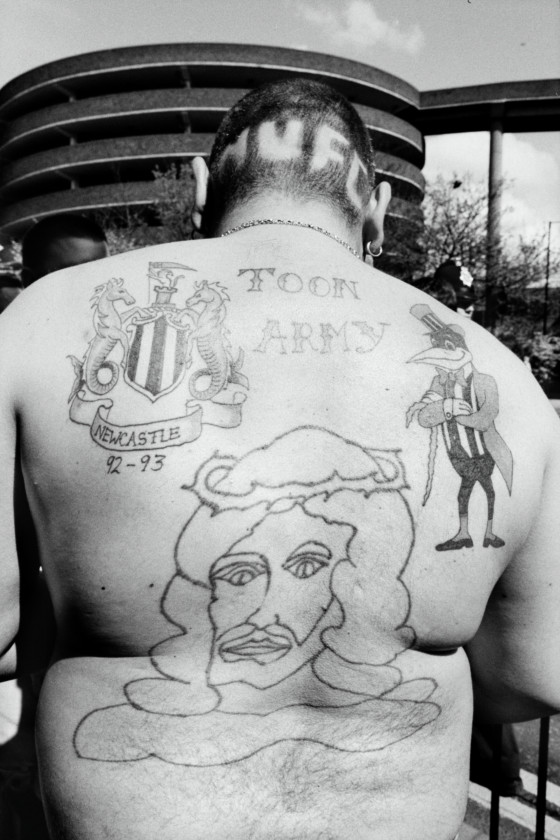 Chris Steele-Perkins Newcastle F.C. fan with his love tattooed on his back: "Toon Army" - what the hardcore fans call themselves. The team, because of the black and white uniform, is called The Magpies. 1996. GB. © Chris Steele-Perkins | Magnum Photos
License | 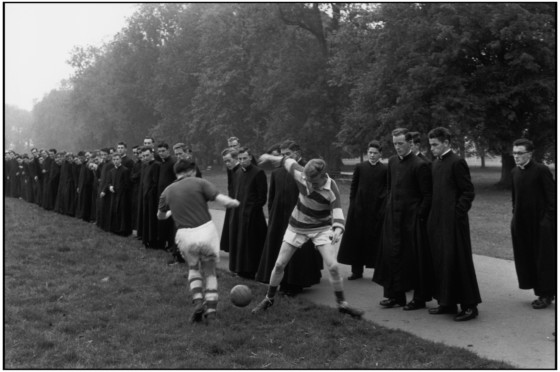 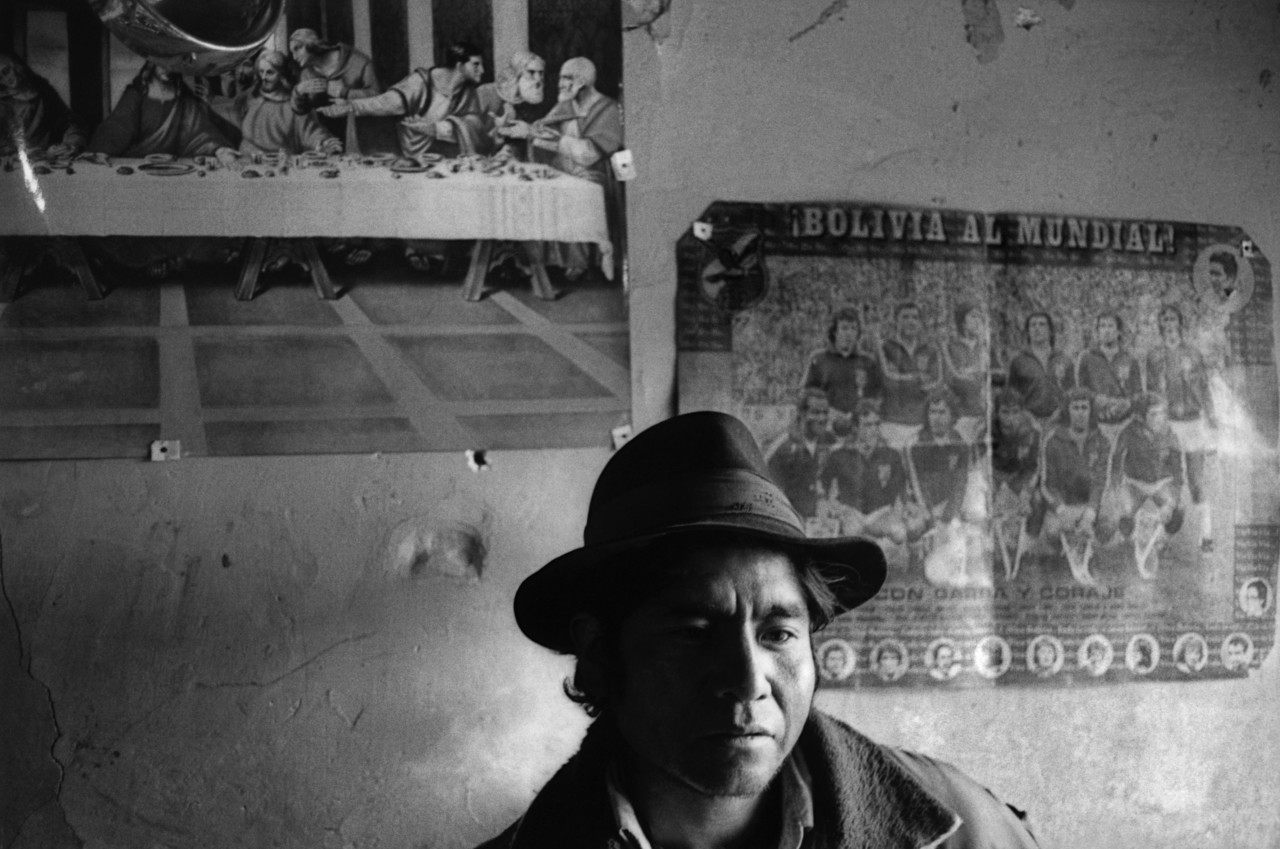 In 2010 football players were given their own patron saint: St Luigi Scrosoppi of Udine, northern Italy, was canonized by Bishop Alois Schwarz. Scrosoppi dedicated his life to helping the poor and vulnerable, and was noted for helping young boys build a sense of purpose by getting them involved in sport. There is a trend for painting football as universally understood and loved and therefore bringing people from all over the world together in joint appreciation, uniting with songs of worship and making mass pilgrimages to follow their teams across the globe. Images like Leonard Freed’s of football supporters celebrating beneath a statue of Saint Francis with his arms outstretched, as if welcoming the masses, are an almost too literal interpretation of the metaphor that the beautiful game is a glorious religion to its fans. 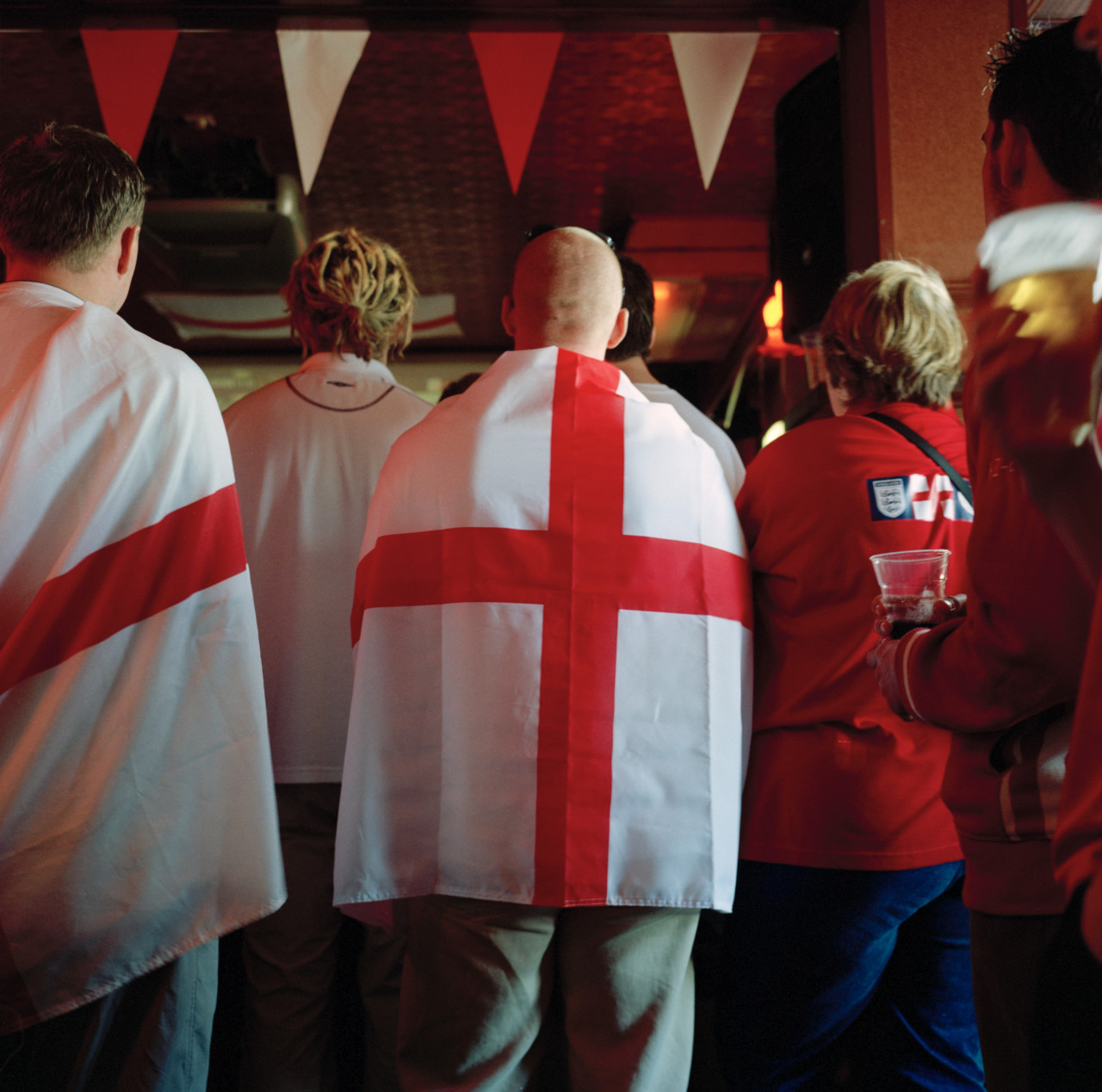 But sometimes the chants resemble more war cries than hymns of praise; it isn’t all beams of light from heaven and angelic chorouses. Also like religion, football has its unfixable rifts, bitter rivalries and deadly clashes, where differences of allegiance are the cause of – and excuse – for violence. Even the first day of the Euros did not go without some ceremonial chair-throwing and fights between groups of fans Marseilles. A history of rivalries between local clubs, such AC Milan and Internazionale, and between Wisla Krakow and Cracovia in Poland, whose rivalry is so fierce and violent it’s been dubbed ‘The Holy War’, are also notorious. The rivalry between Scotland’s Rangers and Celtic is also complicated by the additional factor of religion and the political history of the protestants (Rangers) and Catholic (Celic) denominations of the fans. But rather than an argument for football as a great unifier, or as a backdrop for a blood sport amongst fans, this album presents nuanced moments that demonstrate the universal nature of football in its ubiquity, mundanity and small moments of worship – from novelty postcards amongst gift-shop tat, to the walls of ordinary homes in Bolivia, in a world where football fans appeal to God and players are canonized like martyrs for their work. 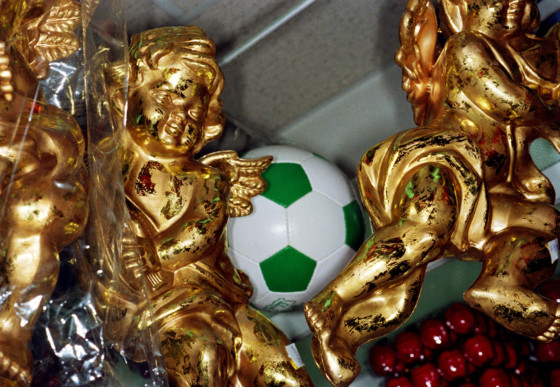 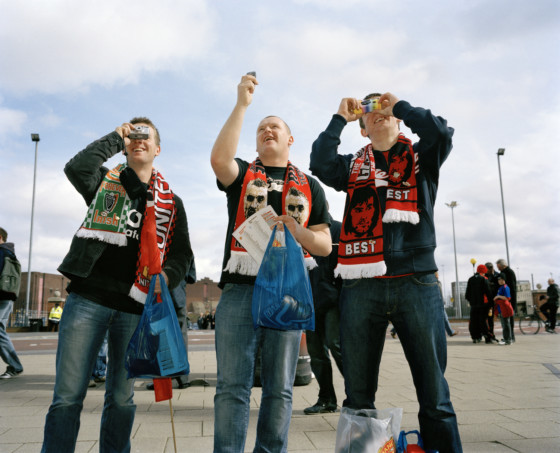 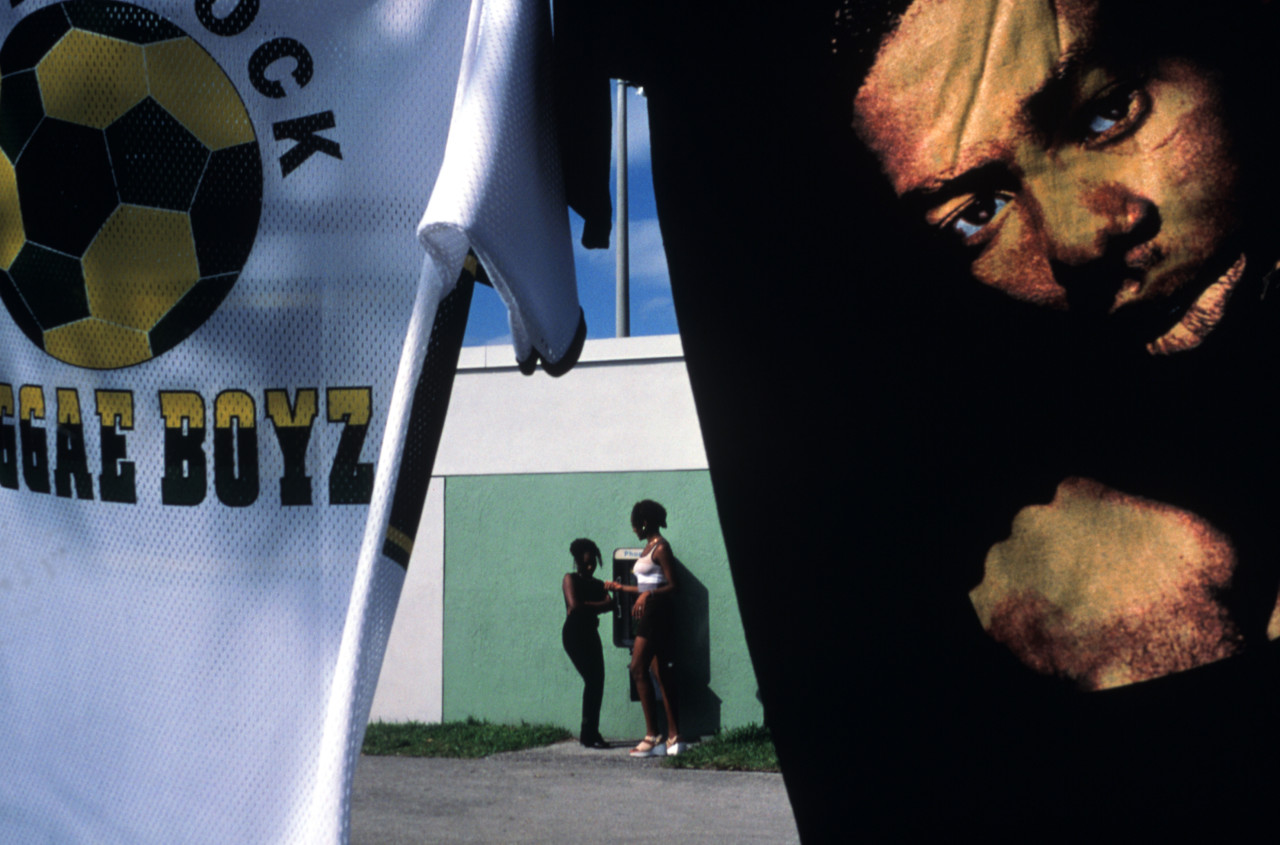