Inge Morath's contact sheet reveals how her image, which initially appears spontaneous, was actually the result of careful planning Contact sheets, direct prints of sequences of negatives were – in the pre-digital era – key for photographers to be able to see what they had captured on their rolls of film. They formed a central part of editing and indexing practices, and in themselves became revealing of photographers’ approaches: the subtle refinements of the frame, lighting and subject from photograph to photograph, tracing the image-maker’s progress toward the final composition that they ultimately saw as their best. There is a voyeuristic aspect to looking at a contact sheet also: one can retrace the photographer’s movements through time and space, tracking their eye’s smallest twitches from left to right as their attention is drawn. It is as if one were inside their head, offered a privileged view through their very eyes from the front row of their brain.

Inge Morath‘s ‘A Llama in Times Square’ is one of the Magnum photographer’s most widely-seen images: having lived various lives in the years following its origins as part of an editorial feature for Life, the photograph is sometimes seen disconnected from its backstory. Its entry in Magnum Contact Sheets illuminates how and why Morath came to make this image.

Morath’s Llama image is available to shop as a fine print and poster, as well as in contact sheet print form, as part of Magnum’s New York: Photographing the City collection. Browse the full selection of books, fine prints, posters and more, exploring the artistic influence of the city on Magnum’s collective of photographers throughout seven decades, here.

Read other entries in Magnum’s series on contact sheets and the making of iconic images here. 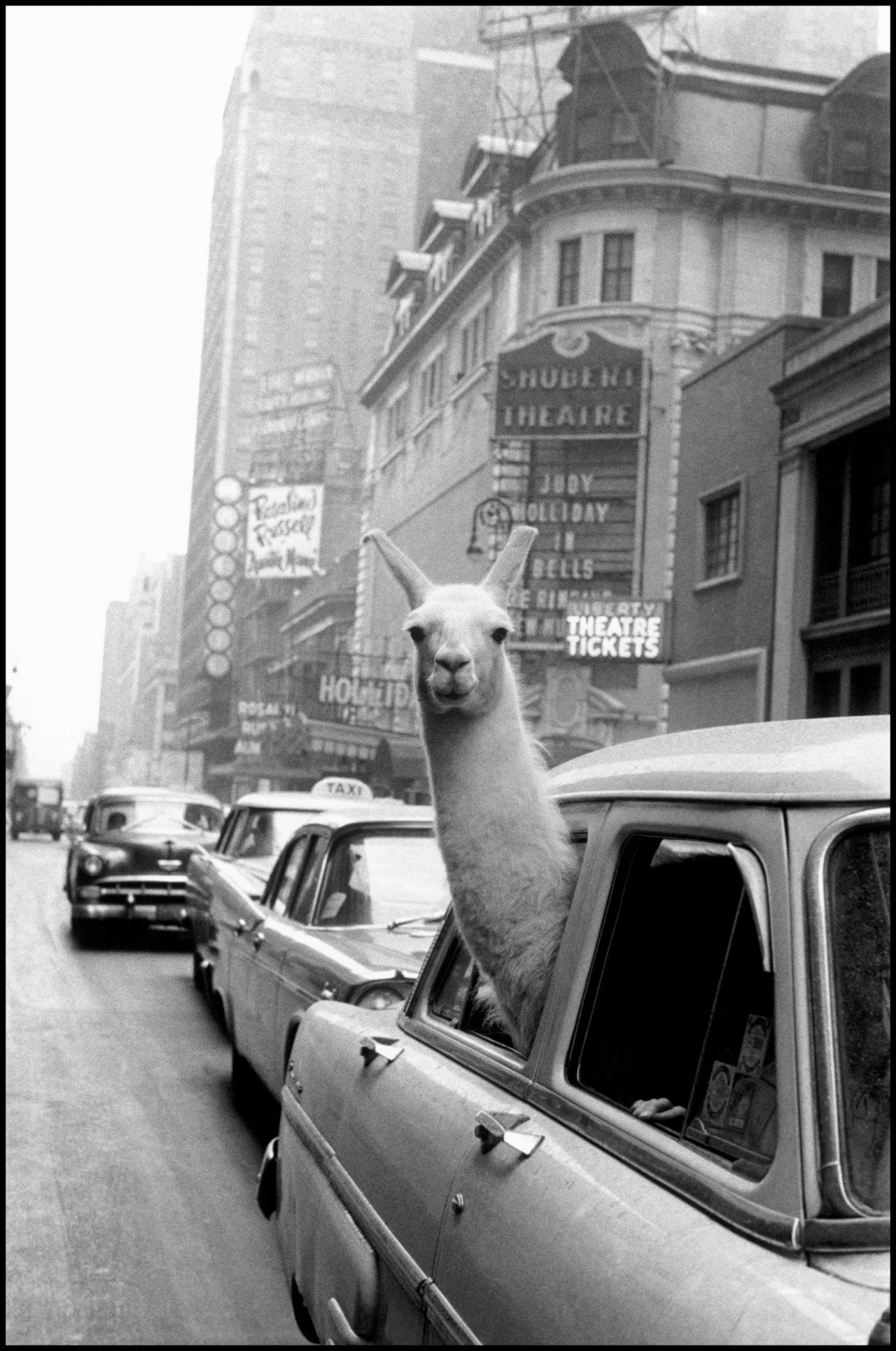 Like many of the iconic images for which Inge Morath is recognized, ‘A Llama in Times Square’ originated in a magazine assignment. In its 2 December 1957 issue, Life magazine published a one-page story, in its humorous ‘Animals’ section, entitled ‘High-paid llama in big city’. The story was about a menagerie of television animals – including, in addition to the llama, large and small dogs, cats, birds, a pig, a kangaroo and a miniature bull – living at home with their trainers in a Manhattan brownstone.

The Life story featured three photographs by Morath, including a cropped close-up of Linda the Llama. Curiously, the caption accompanying the close-up describes the llama as ogling from the window of a taxi on her way to make a television appearance. In fact, she was in the back seat of her trainer’s car, and, as Morath explains, on her way home from the studio when the picture was taken. Morath’s full caption reads, ‘Linda, the Lama, [sic] rides home via Broadway. She is just coming home from a television show in New York’s A.B.C. studios and now takes a relaxed and long-necked look at the lights of one of the world’s most famous streets.’

In Morath’s work chronology, her contact sheets for the story are marked ‘57-1’, indicating that this was her first assignment in the year 1957. On the back of a vintage work print of the iconic picture, Morath has inscribed the caption, ‘57-1. That’s when that was – driving around with Linda the Llama.’ Nevertheless, a selection of snapshots taken by an unknown photographer, showing Morath posing with the llama and her trainers, and photographing them on a New York City street, are all dated 1956 in Morath’s hand. These indicate that she may have spent a great deal of time getting to know her subjects, and might even have been responsible for pitching the story to Life well in advance of the time it was published. This was Morath’s typical working method.

Since its original publication, ‘A Llama in Times Square’ has been exhibited and re-published extensively, being seen everywhere from classrooms and calendars to museum walls and even Oprah Winfrey’s O magazine. Viewed alone, it appears to have been a perfect example of being in the right place at just the right moment. In fact, as Morath’s contact sheets show, it was the result of considerable forethought and work. The appearance of spontaneity, masking the reality of careful planning, reveals the degree of ease that Morath was able to establish with her subjects while working on their stories, and is one of the prime characteristics of her superlative work as a photojournalist. Inge Morath Linda, the llama with its trainer, Mrs. Lorraine D'Essen. New York, USA. 1957. “This image is an outtake from Inge’s iconic story, ‘A Llama in Times Square’ published in the December 2, 1957 issue (...)
of LIFE magazine. The story showcases the humorous yet insightful story of stage and television animal performers living in New York City. Linda, the llama is accompanied by one of her trainers and foster parent Mrs. Lorraine D’Essen, during a ride back home from a television show at ABC studios.” - Sana Manzoor, Inge Morath Estate © Inge Morath | Magnum Photos