Behind the Image: David Alan Harvey’s Boy with Balloons

The photographer discusses the influence of serendipity, his long-standing fascination with Latin culture, and how a momentary need for respite led to the making of one of his best-known photographs In 1987 David Alan Harvey found himself in Santiago, Chile, in the midst of a period of political and social upheaval. A chance encounter led him to make the image that remains one of his best-known today. Here, the photographer discusses the making of the image and his ‘daydreamer years’.

This image is now available – for the first time ever – as a limited edition 8×10″ Magnum stamped print. You can see all images available in this selection— the first collection of Magnum Editions— and learn more about the 8X10″ prints here, on the Magnum Shop.

How did you come to make this image?

I had just quit the staff of National Geographic in favor of being totally independiente… Magnum was in my mind, so I felt I needed to prove myself beyond NatGeo for the tough critique of that Magnum crowd. Chile was in turmoil. Street riots almost every day in opposition to Pinochet. So, [you were seeing] tear gas pictures beside Pope John Paul welcomed by Pinochet pictures.

Even in places in the midst of turmoil normal life always goes on… So, I was happy to see this balloon seller in Santiago. I needed the visual break. I felt others did too.

You have mentioned before that the making of this image was at least partly inspired by the film ‘The Red Balloon’.

That film has always stuck with me for its total simplicity, both visually and philosophically. Serendipity is my life. Letting go of the balloon would end the pursuit. No way that could happen. You hang on no matter what…

What is it about the countries of South and Central America (and indeed their diasporas) that has kept your attention, both creatively and visually?

At first it was simply the Yucatan. I went to the caves in Mani where the Spanish Bishop, Landa, tried to have all of the hand-crafted [Maya Codices] burned. The non-Christian Maya were considered heathens by the Bishop. I still cannot think about it. Picture books of Mayan history: gone. Only a few survived, enough that we know what was lost.

So, I hated the Spanish. Then I went to Spain to meet the horrific “conquistadores”, fell in love, and went crazy shooting.

Then I went back and forth between Iberia, West Africa, Brazil, and all of Mesoamerica reading writers like Fuentes, Marquez, and Allende. I became interested in how the culture and blood of Iberia, mixed with that of Africa, and then the indigenous also— their blood sweat and tears – had largely been wiped out by the conquest. That was a lot of material. I was hooked by these subjects forever.

Is there a secret about this image – something that the viewer might not guess at either in its making or the way that it has become so well known?

I want there to be some mystery in all my work. Narrative does not have to be a straight line. Yet there are no secrets here. It’s just a boy who I did not know who represented my daydreamer years: not child, not man…. an empty place in-between…… the place where the man is formed. The image to me suggests both freedom and fantasy. Balloons make us happy. Reason enough to take a picture.

Artists see the same things that everyone sees yet feel compelled to lock them down, to save them somehow. It’s impossible, of course. Yet I think people can feel what I was feeling at that time. They too need that break. For many who are situated in the middle of steel and glass or a sterile landscape, here are balloons to take us wherever we want to go.

(based on a true story) 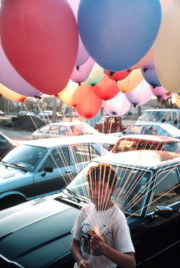 Behind the Image: David Alan Harvey’s Boy with Balloons

Behind the Image: David Alan Harvey’s Work Horse on a Family Porch