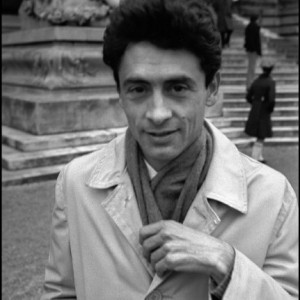 Sergio Larrain was born in 1931 in Santiago de Chile. He studied music before taking up photography in 1949, from which year until 1953 he studied forestry at the University of California at Berkeley. He then attended the University of Michigan at Ann Arbor before setting off to travel throughout Europe and the Middle East. Thus began Larrain’s work as a freelance photographer. He became a staff photographer for the Brazilian magazine O Cruzeiro and in 1956, the Museum of Modern Art in New York bought two of his pictures.

In 1958, Larrain was given a grant from the British Council that allowed him to produce a series of photographs of London. The same year Henri Cartier-Bresson saw his photographs of street children and suggested that he work for Magnum. Larrain spent two years in Paris, where he worked for international press titles.

Larrain became a Magnum associate in 1959 and a full member in 1961. He returned to Chile in 1961 when the poet Pablo Neruda invited him to photograph his house.

In 1968, he came into contact with Bolivian guru Óscar Ichazo and virtually gave up photography to pursue his study of Eastern culture and mysticism, adopting a lifestyle in keeping with his ideals. He has devoted himself to spreading knowledge of yoga, writing, painting in oils and occasionally taking the odd photograph.