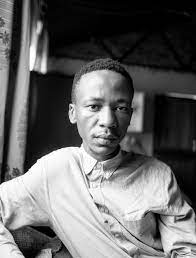 Lindokuhle Sobekwa is a South African photographer born in Katlehong, Johannesburg in 1995. Sobekwa came to photography in 2012 through his participation in the Of Soul and Joy Project, an educational programme run in Thokoza, a township in the southeast of Johannesburg. He studied with Bieke Depoorter, Cyprien Clément-Delmas, Thabiso Sekgala, Tjorven Bruyneel and Kutlwano Moagi.

Sobekwa’s early projects dealt with poverty and unemployment in the townships of South Africa, as well as the growing nyaope drug crisis within them. His ongoing works, as well as revisiting those early themes, also deal with his own life – for example his relationship with his sister, Ziyanda, who died after becoming estranged from her family.

In 2013, Sobekwa was part of a group show in Thokoza organised by Rubis Mecenat at the Ithuba Art Gallery in Johannesburg. His essay Nyaope was published in the South African newspaper Mail & Guardian in 2014. The work was also published in Vice Magazine’s Annual Photo Issue, and the De Standaard the same year.

In 2015, Sobekwa received a scholarship to study at the Market Photo Workshop where he completed his foundation course. His Series Nyaope was exhibited in the ensuing group show, Free From My Happiness, organised by Rubis Mecenat at the International Photo Festival of Ghent in Belgium. In 2016, he left South Africa for a Residency in Tehran, Iran, with the No Man’s Art Gallery. The same year his work was displayed in the travelling iteration of Free from my Happiness.

His work features in the book Free from my Happiness edited by Bieke Depoorter and Tjorven Bruyneel . He also took part part in the group show Fresh Produce, organized by Assemblages and VANSA at the Turbine Art Fair in Johannesburg. Lindokuhle Sobekwa is also an assistant to the Of Soul and Joy Project Manager as well as a trainee at Mikhael Subotzky Studio.