Before the government intervened, student-led demonstrations had a festival feel, remembers the photographer Patrick Zachmann first visited China in 1982, beginning a decades-long immersion in Chinese culture. Even the visual style he used to document the country was inspired by its artistic output, with Zachmann’s cinematic black and white signature informed by the visuals of Shanghai film noirs of the 1930s. Over the years, Zachmann explored many facets of Chinese life, from migration – which resonated with his own family background – to exploring subcultures, and he has published several books on his extensive work, including So Long China, and W. Or The Eye of A Long Nose. The photographer was, between 1988-89, working on a project documenting the youth of Beijing and had plans to explore five demographics of young people he wanted to take portraits of when he arrived in the city as some students were gathering in Tiananmen Square, demonstrating in favor of democratic reforms and increased freedoms. Familiar with the usual scenes in the city after previous visits, Zachmann immediately sensed that something significant had changed as soon as he arrived. 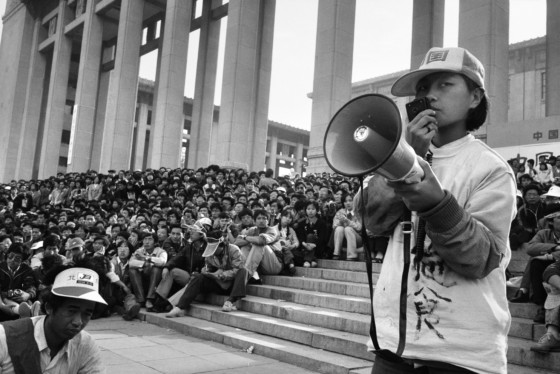 Patrick Zachmann Press conference in front of the Museum of the revolution. A representative of the Beida University strikers, Chai Ning, becomes the spokesperson. Tiananmen Square, Beijing, China. May 16, 1989. © Patrick Zachmann | Magnum Photos

"I call it Chinese Woodstock because, actually, Tiananmen Square before the crackdown, before the famous student stood in front of the tank, it was like a festival"

“I could see groups of people gathered in Tiananmen Square from my taxi, which if you knew China, was very unusual, so I went there and witnessed what was the very beginning of the Tiananmen Square protests,” he recalls. “I stayed almost the whole night with the students.”

What began as a personal documentary project was now veering toward journalism, and Zachmann, who has always taken a very personal narrative approach, found himself rising to the duty of a documentarian. “This was a case of my personal work crossing with history as it happens, and you switch – even though it was still personal work, it is of course journalistic,” he says. 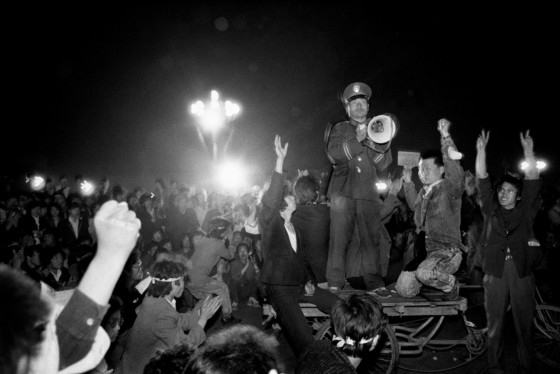 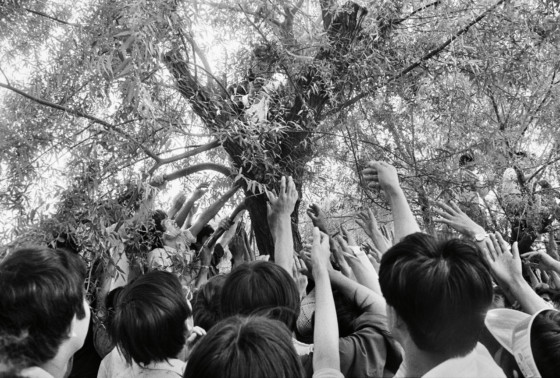 Zachmann is careful to emphasize the importance of understanding the context in which his images are read. That Tiananmen Square had a “Woodstock” feel was momentous. “Years later a Chinese friend of a friend told me he will never forget that time because he was there with his girlfriend, and it was the first opportunity he had to spend the night with her. For reasons such as that this aspect [of the protests] was very important, but isn’t something that was really covered by the media that was there.” It was arguably Zachmann’s long-term investment in Chinese culture that allowed him to photograph moments that may have seemed inconsequential to international press but were hugely significant to Beijing’s youth. 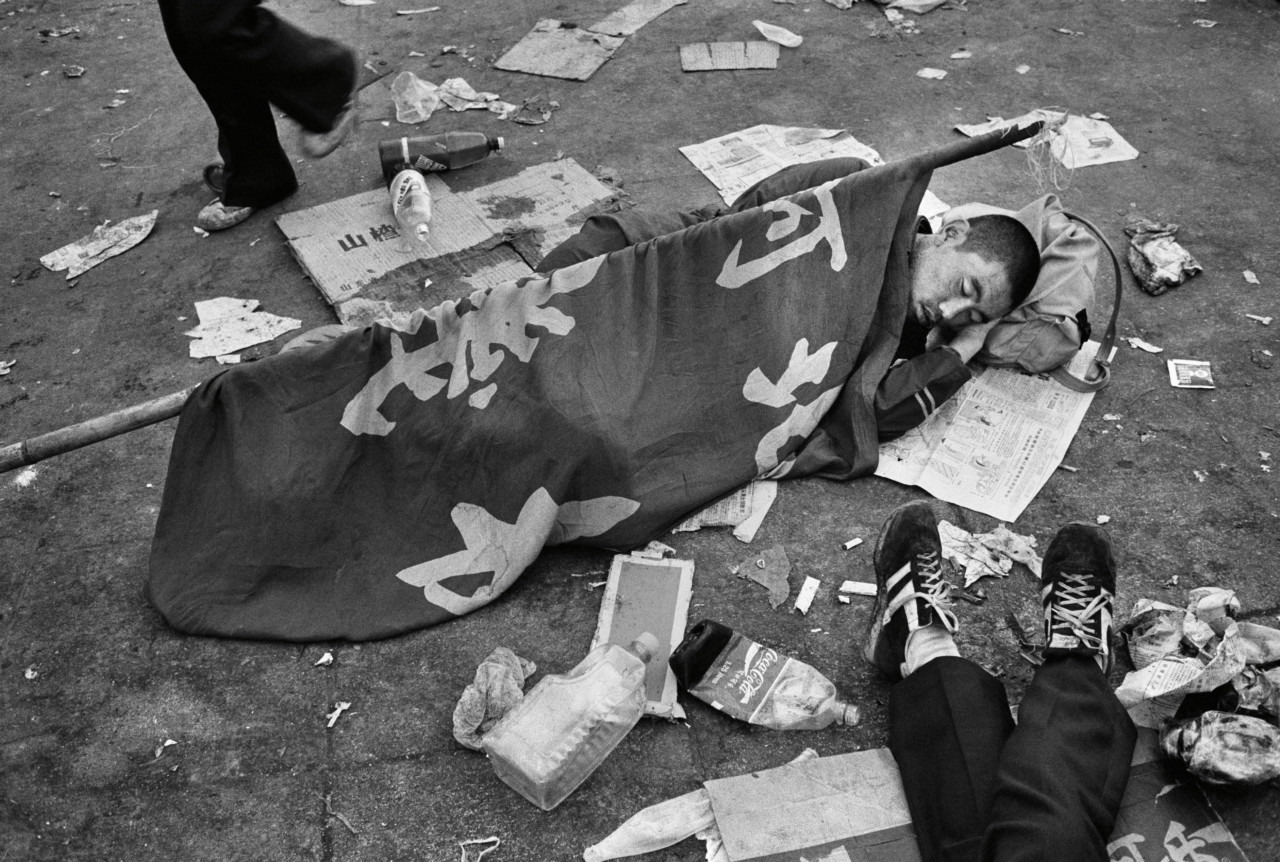 "Years later a Chinese friend of a friend told me he will never forget that time because he was there with his girlfriend, and it was the first opportunity he had to spend the night with her."

Reflecting on his time at Tiananmen Square, Zachmann recalls another profound moment: “Just after I took this picture he came to me and he kissed me,” he says of a photo of a young man. “I call it Chinese Woodstock because, actually, Tiananmen Square before the crackdown, before the famous student stood in front of the tank, it was like a festival, it was like something absolutely exceptional – full of hope,” says the photographer of the days leading up to the crack down when events turned violent, resulting in several hundred peaceful protestors being shot.

“It was unique in the sense that, for once, young people were rebelling against the regime, shouting for freedom but also railing against the Chinese cultural education which keeps them in their place, forcing them to follow the rules, to respect elders and not to show their emotions. That young boy who kissed me was the first one to make such an emotional and spontaneous gesture in the many years I spent photographing China.” 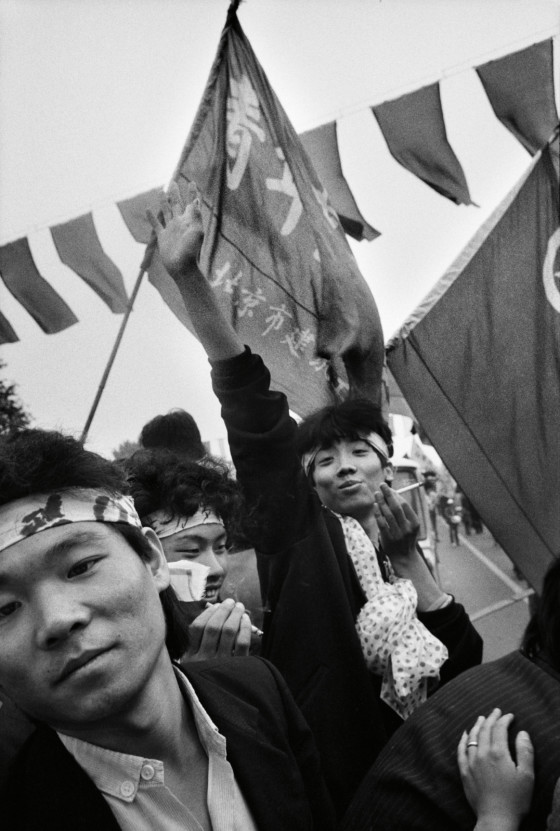 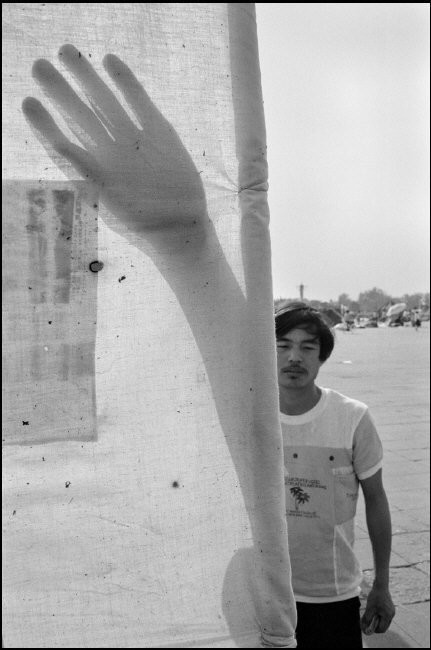 Zachmann is keen to clarify the meaning behind some of his images taken at this time. Taken out of context an image of a woman writhing on the ground and screaming, could conjure thoughts of governmental brutality and clashes between protesters and police, but Zachmann explains that in actuality the photograph shows a drama student mid-performance in support of the hunger strike – “She said she was symbolizing the pain of people of China,” he says. “She was premonitory.”

Zachmann remembers things differently to the majority of observers around the world who have based their impression of the protests on news footage of subsequent events. “It was of course a political movement, they wanted change, but they didn’t want to destroy, to kill the Communist party, they just wanted more freedom, they wanted to reform the party,” he says. “It was exceptional for them to be able to demonstrate freely and show their emotions. For all of these reasons, it was very important.” 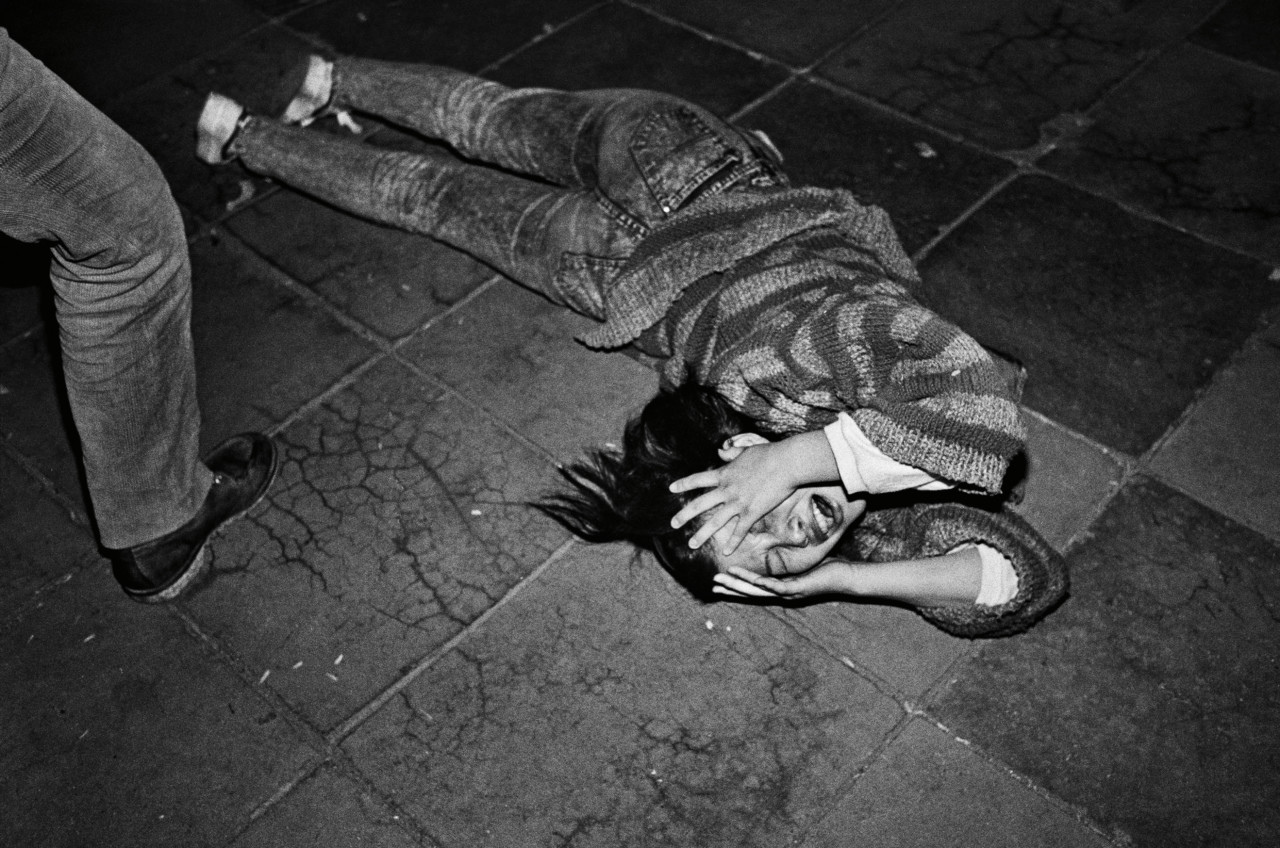 Patrick Zachmann A drama student who came with a couple of fellow students to show their solidarity with the protestors, perfoms "the pain of the Chinese people". Tiananmen Square, Beijing, China. May 1989. © Patrick Zachmann | Magnum Photos 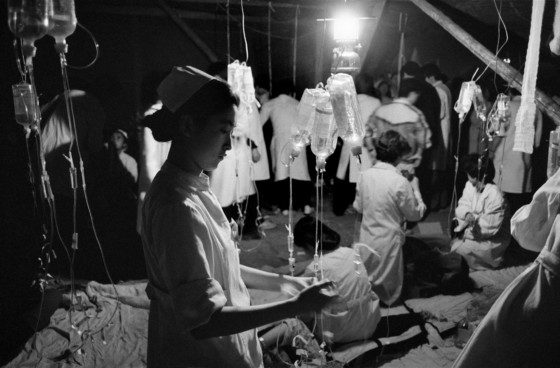 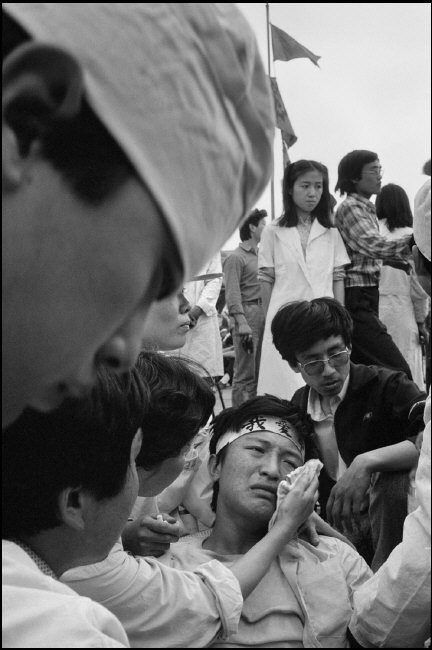 Reflecting on the events as the 30th anniversary approaches, Zachmann said, “I will never forget these moments and their faces. They were peaceful but because the old governors lost face in front of the whole world through the media coverage, the students paid a high price for that humiliation.”

“For me there is a ‘before and after’ the Tiananmen Square protest, in terms of the way I look at China and at its dictatorship ­­– because that’s how I view it,” says Zachmann. “I am convinced that deep inside the majority of Chinese people there are many traumas which remain, which are silently transmitted to the younger generation. Seismic moments like the Cultural Revolution of Mao are historical traumas, as is Tiananmen, for those who were involved. I admire Chinese people for their huge capacity for adjusting themselves to changes, for their resilience.” 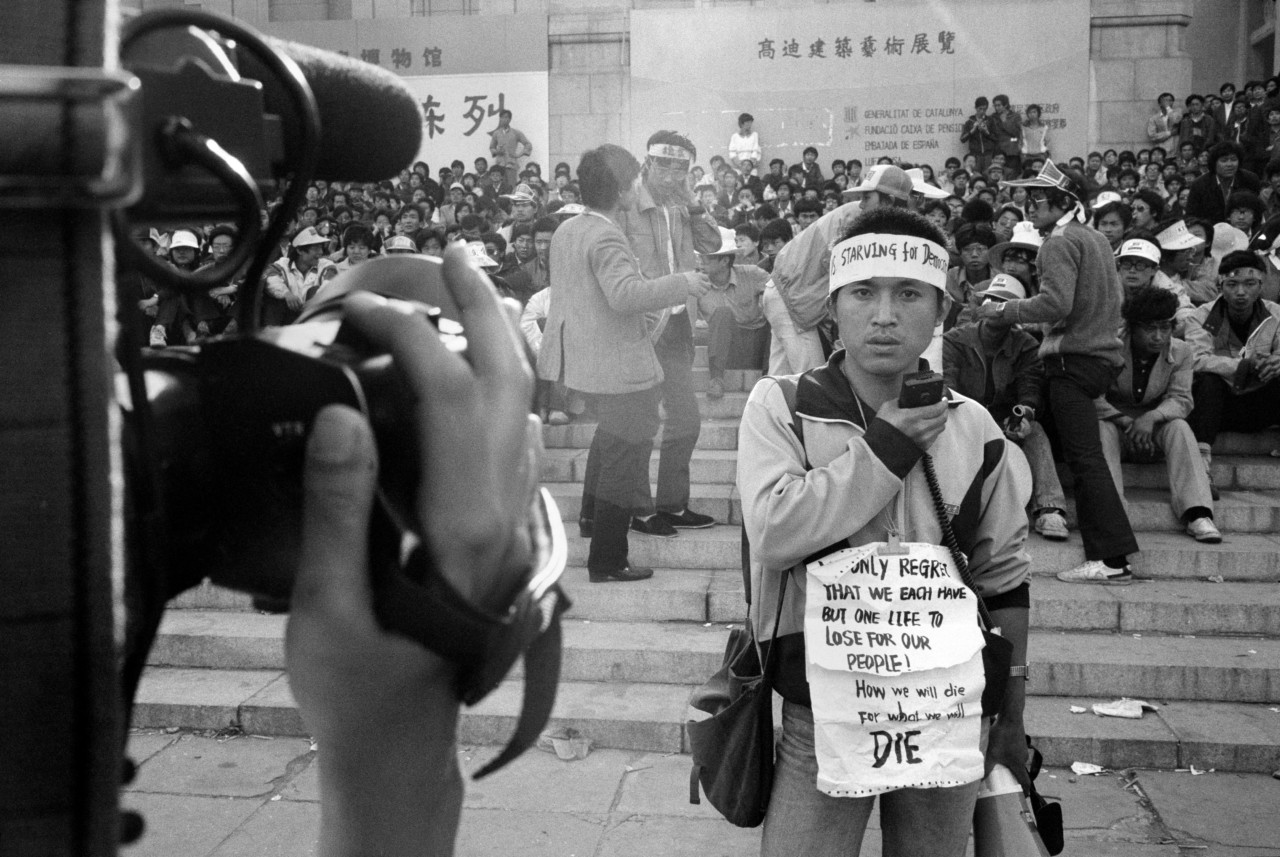 Patrick Zachmann During the night the confrontation between the government and the students is carried out with loud speakers. While the "official" loudspeakers on the square send out constant messages to the stude (...)
nts imploring them to stop their movement those of the students call them to continue. Tiananmen Square, Beijing, China. May 16, 1989. © Patrick Zachmann | Magnum Photos

The story of the massacre in Tiananmen Square has been suppressed in Chinese media, with the likelihood of a young person being familiar with this history correlating with their education level and exposure to the world outside of China. “Nowadays, [discussion of] this event is still a political taboo and our images are still censored, but the truth always finally comes out,” says Zachmann. “Our photographs exhume the buried memory.” 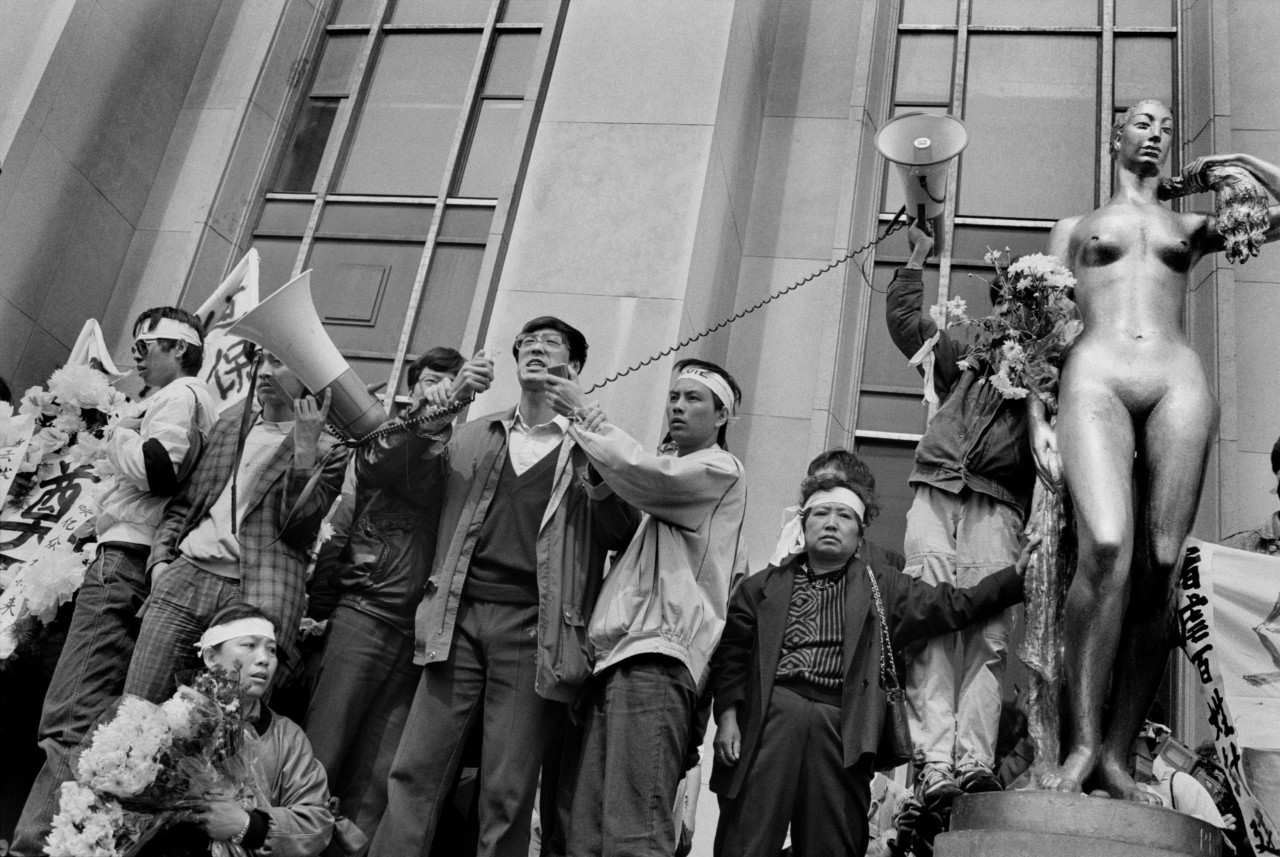