Jérôme Sessini’s new book, Inner Disorder, collates his work made in Ukraine over three years, tracing the Ukrainian uprising from the extreme violence of the latter stages of the Euromaidan protests in February 2014, to growing Russian nationalistic sentiment manifesting across the eastern part of the country. As two republics emerged in the Donbas region, in the aftermath of revolution in Kiev, Sessini mapped fighting that broke out between separatists and militias supporting Ukraine, travelling between the capital and the industrial cities of the east, documenting shell-ridden landscapes, and everyday life for civilians amid war. The book, available now from Editorial RM, combines Sessini’s photographs, video stills — including from an original film made at Maidan Square, and his diary notes from 2014 to 2017. The result is a decidedly non-partisan portrait of a country devastatingly divided.

Sessini sat down with Magnum to discuss the making of the work, how a photographer removes traces of themselves from journalistic images, and the necessity for encounters with truth in violence. Jérôme Sessini A patient in his room at Hospital 21 in Octobersky district. Despite the shelling of Ukrainian army, the hospital continue to treat the poorest patients and the wounded. Donetsk. Ukraine. November (...)
30, 2014. © Jérôme Sessini | Magnum Photos

You have been working in Ukraine for a long time – was it hard to know when to call the work complete, and to start work on this book? Was there a particular event, or cessation of events that made that decision for you?

I especially remember what sparked the urge to switch from news coverage to long-term work. I made this decision almost from the start. I arrived in Kiev for the first time on February 19, 2014: the next day, I witnessed the most violent events that occurred there since protests in the city began. More than 70 demonstrators, but also police officers, fell under the bullets of snipers. A few months later, eastern Ukraine clashed with the pro-Western government in Kiev. Ukraine is an area of ​​influence for both Russia and Europe. I realised that this was a conflict that extended beyond the borders of Ukraine. To be able to work on a long-term project, for four years, I had to find myself in a gray area, between rational understanding of the subject matter and almost obsessive fascination. It is often the end of this abstract attraction that dictates the end of a project for me. 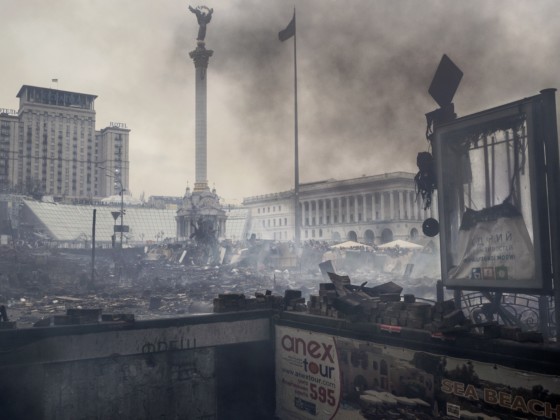 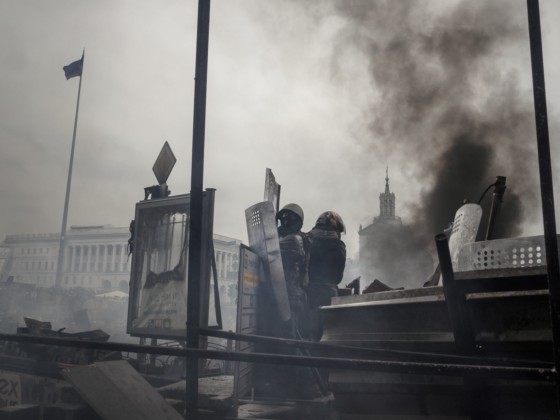 Jérôme Sessini Maria Matvyiev, crawls under snipers fire in Instituska street. As a first aid worker she’s trying to help the wounded protesters. Maria came to Kiev from Busk (Near Lviv) to join the protesters. T (...)
his day, unidentified snipers open fire on disarmed protesters as they was advancing on Instituska street. According to an official source, 70 protesters were shot dead. Ukrainian riot police claimed that several policeman were wounded or shot dead by snipers as well. An unofficial source said that snipers opened fire on the police and protesters at the same time in order to provoke both camps. Kiev. Ukraine. February 20th. © Jérôme Sessini | Magnum Photos

This work spans factories and mines, hospitals, conflict, right wing marches, and protest. How important to you was it that a book on the war in Ukraine should show more than the fighting?

This is the essential point of my work, allowing the reader to see without demonstrating to them. It is the reverse of the typical journalistic code. I try to circumvent the obvious, the stereotypes of war photography, in order to avoid falling into propaganda. Propaganda is what outside witnesses often serve, however consciously or unconsciously. I am interested in the lives of ordinary people immersed in these extraordinary moments of war. 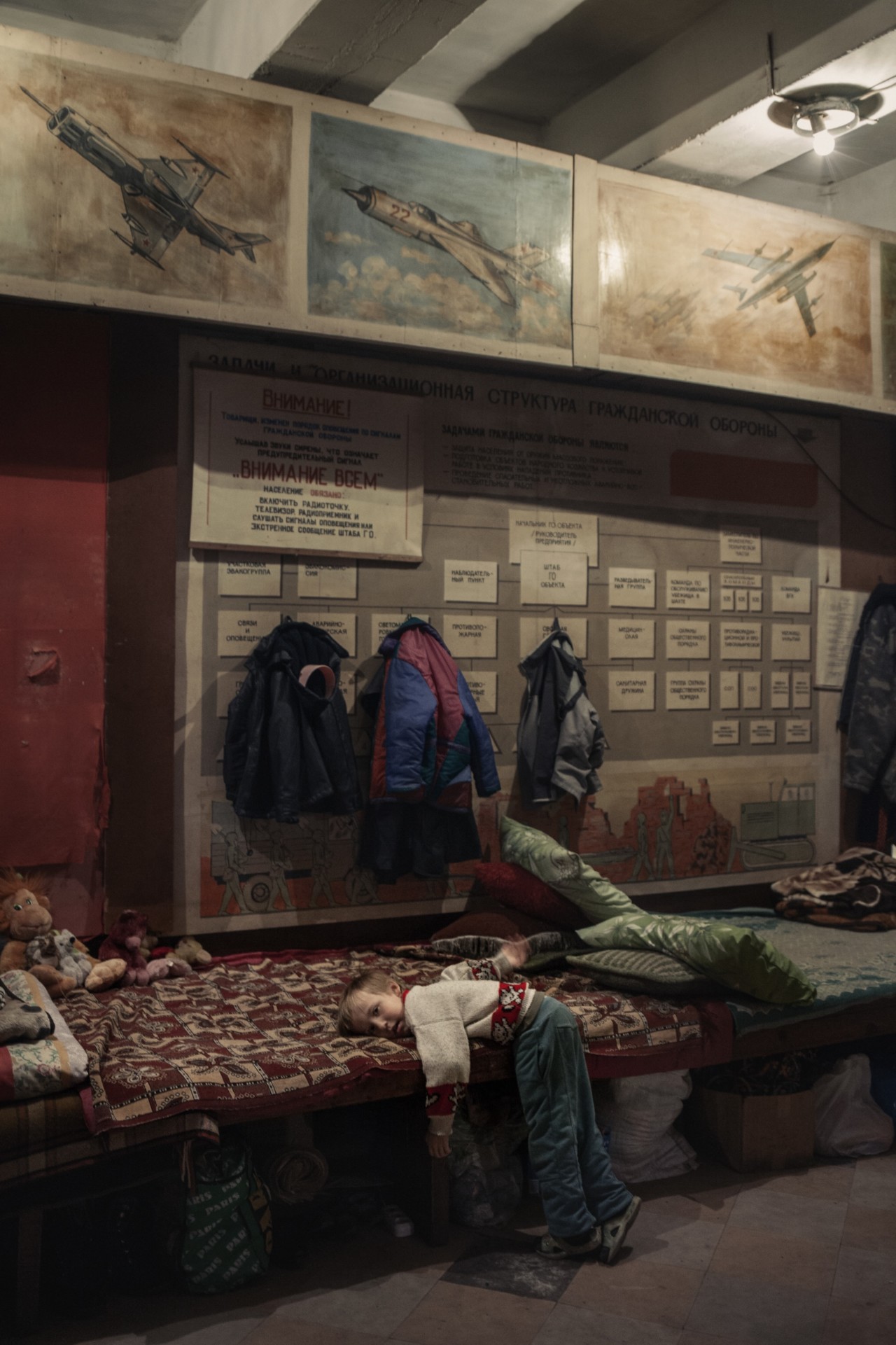 Jérôme Sessini Petrovsky area. Because of heavy shellings of ukrainian army, families lives in a shelter of the World War 2 outside the Trudovsky coalmine, The mine has been closed months ago because of the fight (...)
s between pro-russian and ukrainian army, leaving hundreds of miners jobless. Donetsk. Ukraine. November 19, 2014. © Jérôme Sessini | Magnum Photos

You photographed supporters of Europe and of Russia. Did any ‘side’ of the conflict present more surprises during your reporting compared to the media depictions you had seen?

Not really. As is my goal throughout my practice, I try to extract the essential, moving towards the universal. Namely, I want to explore the human being in all its complexity and also banality. I remove the politics that influence the antagonisms the human is pulled by. Ultimately, I find people, like you and me: victims of forces that are beyond them. Jérôme Sessini A woman on the tramway downtown. Located on the Azov Sea, some 100 kilometers from the rebel-held provincial capital Donetsk, Mariupol is seen as a key element of a potential land corridor from Ru (...)
ssia to the Crimean peninsula. Mariupol. Ukraine. May 27, 2015. © Jérôme Sessini | Magnum Photos 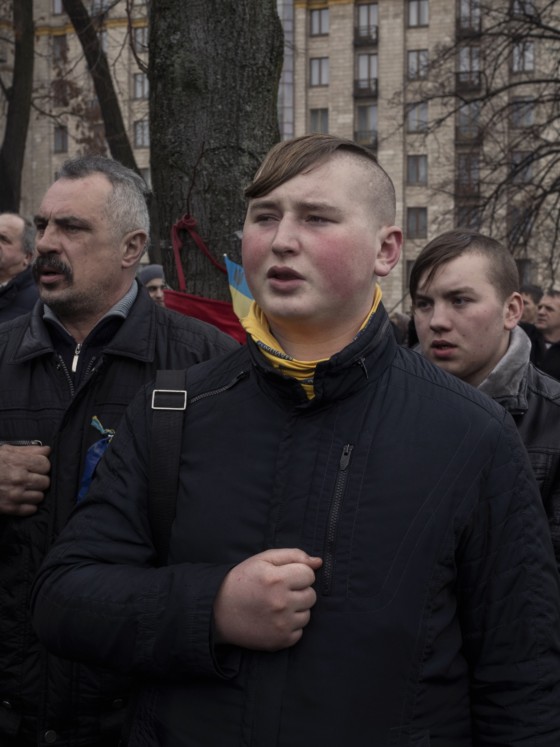 Jérôme Sessini Members of nationalist party Right Sector during a mass for Maidan victims in Institutska street. First anniversary of the Maidan revolt. People and protesters who participated to the last year pro (...)
tests gather in Maidan square to pay tribute to the victims of the repression. On February 20th 2014, tens of protesters were killed on the barricades in Instituska street. Kiev. February 20, 2015. © Jérôme Sessini | Magnum Photos The book makes use of video and new stills, some with subtitles. What different functions do still photography and video play in telling the story?

The first videos that open the book are from my own videos taken in Maidan. The second part consists of footage found online. They show Donbass fighters who have just captured a Ukrainian officer and regular army soldiers after fighting at Donetsk airport. I chose to contrast raw videos that show violent sequences openly, against lyrical and emphatic still images, in order to create a rhythm. I thought of the book’s structure as that of a spiral film, starting with violence in the West, and ending with violence in the East. The whole being articulated around hyper-realistic passages evoked by the videos.

Sessini’s video from Maidan Square can be seen below. Viewer’s note: this footage depicts the injury and deaths of protestors.

While there are a few black and white images, the aesthetic of most photographs in the book is that of a sort of brutal clarity… they are sharp, life-like colour, quite a few in stop-motion-like sequence… Was it a conscious decision to make the photos look this way? Does this approach reflect your rejection of the idea of ‘iconic’ images?

It’s difficult to answer. The lighting and color treatment are the result of an instinctive approach. There is no reflection, no aesthetic research, in this process. I totally reject the idea of ​​style, which often leads to mannerism. I think the hardest part of photojournalism is finding neutrality. It’s impossible, but the more the photographer manages to erase himself, the more the images find their meaning. Of course, this meaning might vary from one viewer to another. The more neutral the images, the more they can touch the reader’s subconscious. They can be interpretedendlessly, touch the heart or the mind.

I would also add that what defines my approach is, above all, openness to others, rather than introspection. My thinking is constant, but that’s not what I want to highlight. I want to prevent the photographer and his “style” from becoming the subject. It is the photographer’s relationship with the world exterior to him that defines a work. Not its artifices. 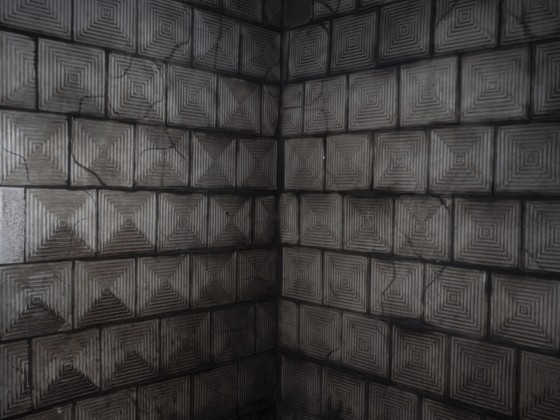 Jérôme Sessini Miners locker-room wall’s detail at Tchelunskinsev coal mine, in the Petrovskyi district in the western district of Donetsk, are still operating despite the fact that the mine is under the constant (...)
shelling from ukrainian army artillery, besieging the city. Donetsk. Ukraine. © Jérôme Sessini | Magnum Photos 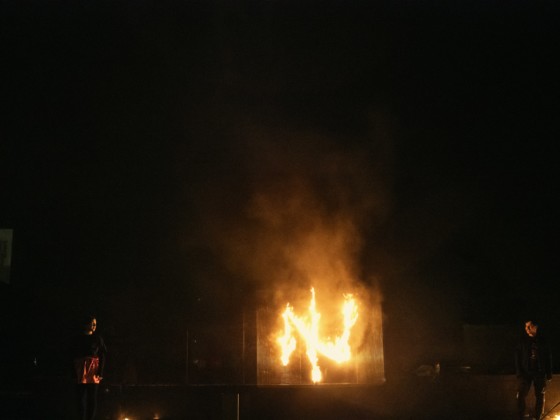 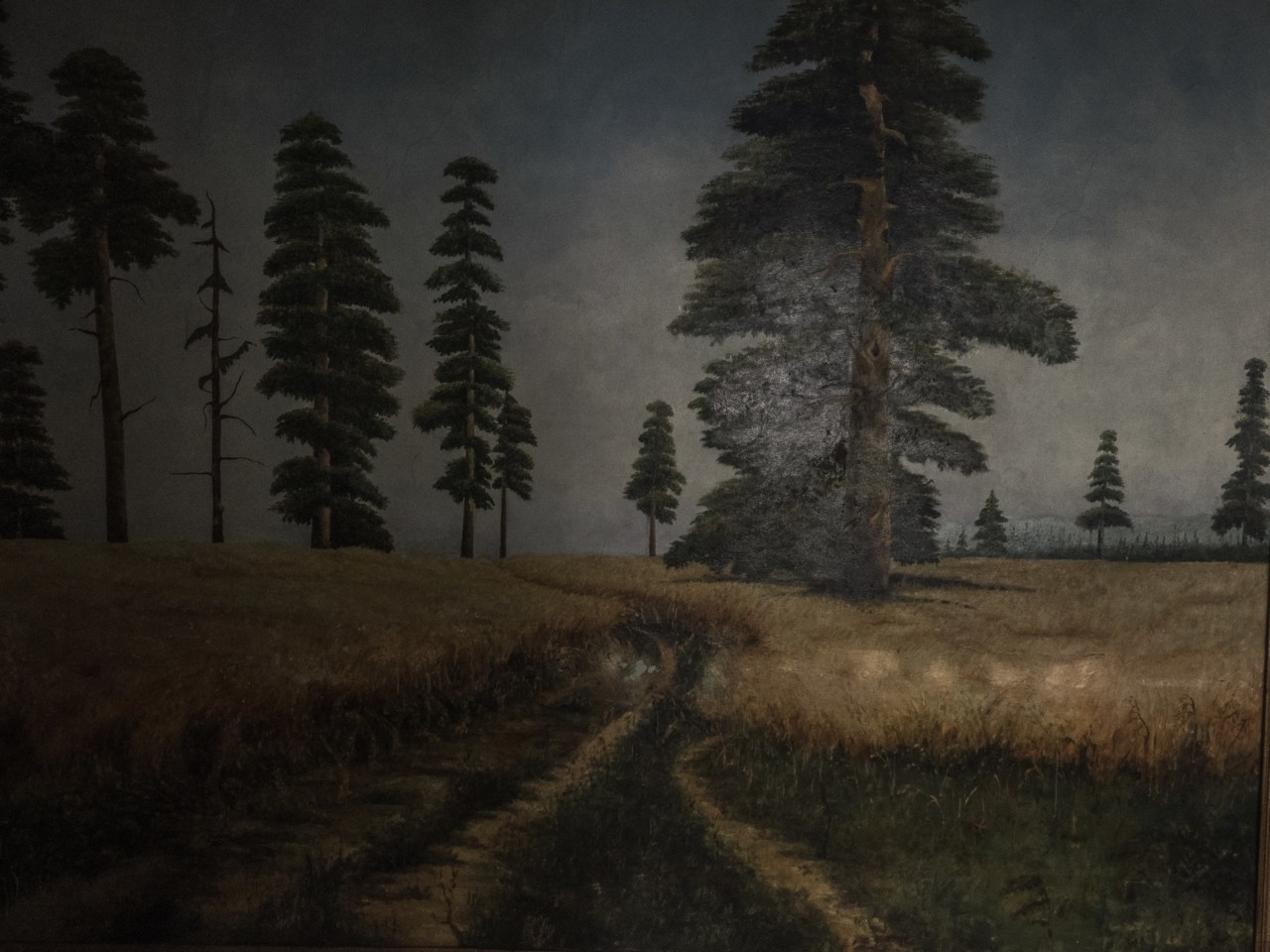 François Hébel, in the book’s introduction, mentions the proximity of images to violence breaking our ‘sadly blasé gaze’. Much is made of the desensitisation of today’s viewers to images of violence and war. How much was that in your mind either in making the images, or in editing the book? Hébel says that images that shake us are ’necessary’… One might think particularly of your photos of the MH17 crash site – which shocked many people. You have also captured extremely visceral images in Maidan Square.

I never try to shock. Often readers are mistaken and confuse the depiction of violence with pathos. It is reality that is not shocking in the photographs. Violence is not always visible: this is one of the limits of photography. Once these limits are identified and accepted, then the photographer’s work can begin. I try to be a link between the real and the hearsay. Everything in the photographic process is a search for balance, from shooting, to the construction of a book. The point of the publication is that it forces you to make choices knowing that there will be no turning back. You are responsible for what you have put out. 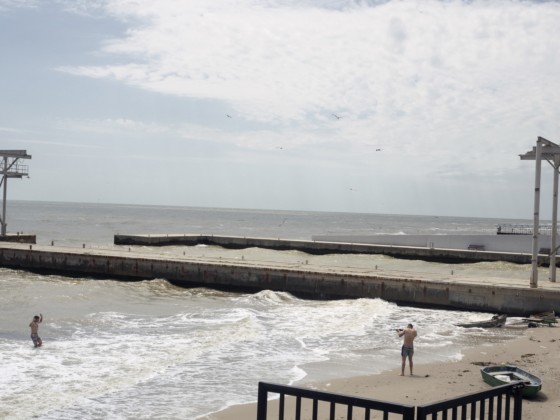 Jérôme Sessini Members of the Azov battalion relaxing on the beach. The Azov battalion, based in Ourzouf inside the former summer residence of Lioudmilla Yanukovych on the Azov sea shore, is a special battalion f (...)
ormed of Ukrainian volunteers under the command of the Ministry of Interior of Ukraine. This battalion in charge of fighting against armed pro-Russian insurrection in the east, was formed in May 5, 20. Mariupol. Ukraine. July 15, 2014 © Jérôme Sessini | Magnum Photos 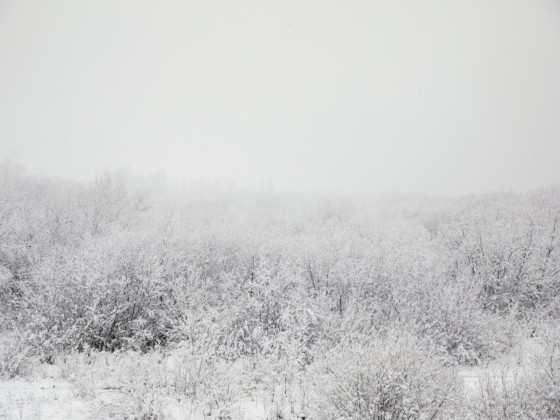 Hébel’s text also hints at Ukraine’s litany of woes going back decades, if not centuries. It reminded me of Timothy Snyder’s Bloodlands. Your book, to me at least, hints at this also – rare images of seemingly placid landscapes, of the timeless trappings of the Orthodox Church, photos of factories that seemingly could have been from 100 years ago, perhaps even near-medieval looking armour and weapons in the hands of protesters… Was there a sense when working there that people feel this weight of history upon them and the country?

Absolutely. The history of Ukraine runs through all generations, and in all walks of life, with innumerable differences in feeling between West and East. Jérôme Sessini The coal storage area of the mine. Tchelunskinsev coal mine, in the Petrovskyi district in the western district of Donetsk, are still operating despite the fact that the mine is under the constant (...)
shelling from ukrainian army artillery, besieging the city. Donetsk. Ukraine. November 24, 2014. © Jérôme Sessini | Magnum Photos 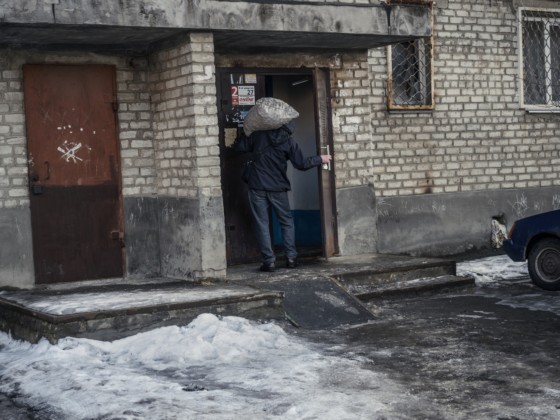 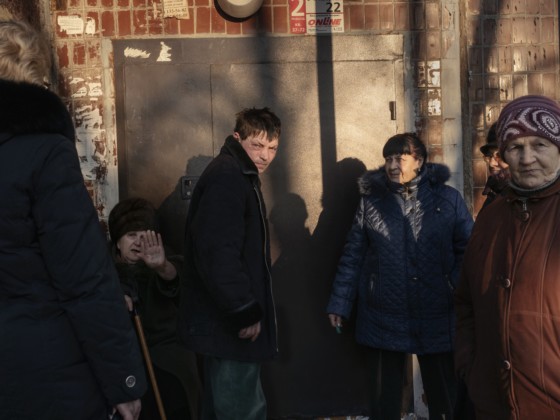 Some photographs in the book nod toward the surreal, or absurd: incongruous moments in a war-fractured place. Was there a sense of absurdity for you, while making this work? In your experience do many such situations present devastation alongside the surreal?

Not really. Throughout my travels in Ukraine, I have rather experienced a feeling of resignation and helplessness. In the face of incomprehension and growing hatred between western Ukrainians and Russian speakers, it is impossible to see a way out. 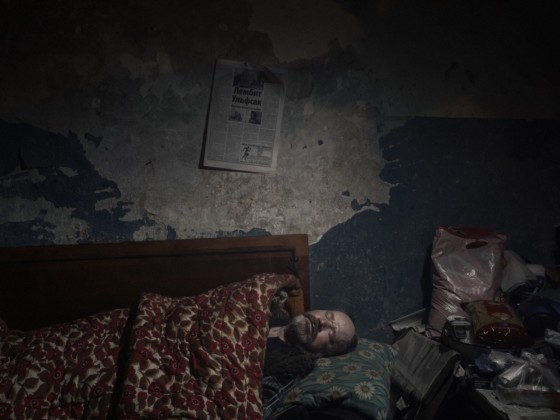 Jérôme Sessini A man asleep inside a makeshift bedroom in a shelter for civilians in Kievsyi district near the Donetsk airport. Donetsk. Ukraine. November 30, 2014. © Jérôme Sessini | Magnum Photos Jérôme Sessini UKRAINE. Mariupol. May 31, 2015. A woman sits alone at a trendy bar after a heavy metal concert. Located on the Azov Sea, some 100 kilometers from the rebel-held provincial capital Donetsk, Mariu (...)
pol is seen as a key element of a potential land corridor from Russia to the Crimean peninsula. © Jérôme Sessini | Magnum Photos

You have said before that in the moment of danger or violence you experience clarity of purpose, and the wider issues are not on your mind, that it’s only with time that a narrative grows. Looking at the book now – what is the message you want a viewer and reader to take from it?

I am not trying to convey a message, but I hope to bring the reader as close as possible to my emotions and my perception of this conflict: namely an imperfect, partial and changing vision, which is constantly questioned. 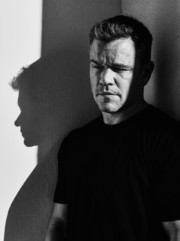 Capturing the Anthropocene: Changing Depictions of the Climate Crisis