Newsha Tavakolian An Iranian woman walks through a haze of smoke caused by the burning of the herb esfand. According to popular belief, this ritual drives away the evil eye. Iran. 2015. © Newsha Tavakolian | Magnum Photos
License |

Magnum Photos is delighted to announce the next 7-day Photography workshop in Tokyo on 17th March – 23rd March 2017, led by Magnum photographers Moises Saman and Newsha Tavakolian with the support of the Nippon Photography Institute.

The Magnum photographers will lead two groups of 13 emerging photographers through a daily program of shooting, reviews, group critiques, mentoring, editing, with the opportunity to also learn from peers and develop a unique and personal visual language.

Participants will work to create an edit to be shown at the Nippon Photography Institute at the closing workshop projection. This will be a public event. In addition to the workshop program, guest experts from the local photography industry in Tokyo will come and provide insight into working in their particular areas of expertise. 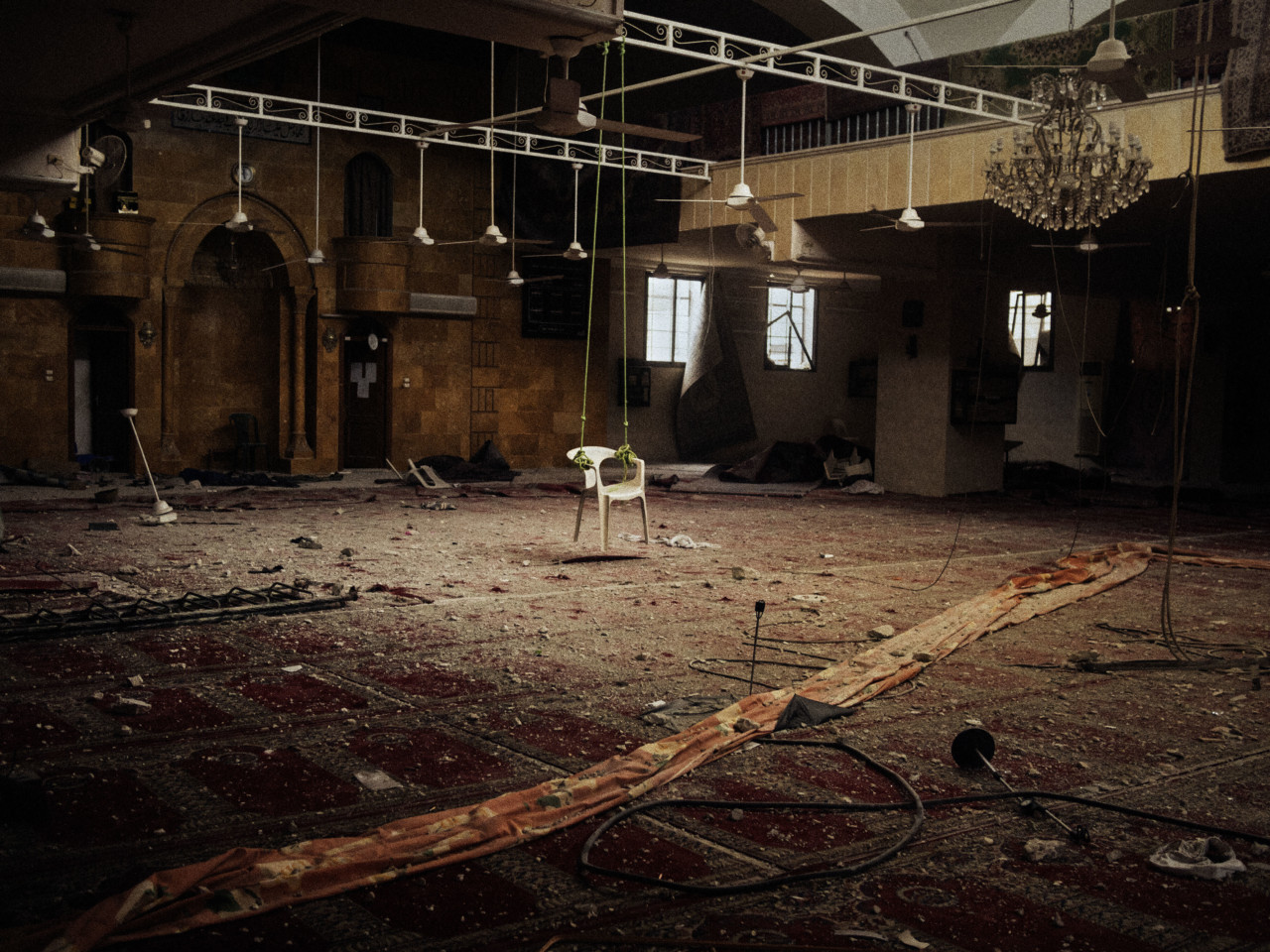 “As a photojournalist I am interested in searching for the positive commonalities in human spirit, to expose those intimate moments among people that reminds us of dignity and hope in the face of conflict. ”

Moises Saman was born in Lima, Peru, from a mixed Spanish and Peruvian family. At the age of 1 his family relocated to Barcelona, Spain, where Moises spent most of his youth. Moises studied Communications and Sociology in the United States at California State University, graduating in 1998. It was during his last year in university that Moises first became interested in becoming a photographer, influenced by the work of a number of photojournalists that had been covering the wars in the Balkans.

Moises interned at several small newspapers in California, and after graduating from university he moved to New York City to complete a summer internship at New York Newsday newspaper. That fall, upon completion of the internship, Moises spent a month traveling in Kosovo photographing the immediate aftermath of the last Balkan war.

In 2000 Moises joined Newsday as a Staff Photographer, a position he held until 2007. During his 7 years at Newsday Moises’ work focused on covering the fallout of the 9/11 attacks, spending most of his time traveling between Afghanistan, Iraq, and other Middle Eastern countries. In the fall of 2007 Moises left Newsday to become a freelance photographer represented by Panos Pictures. During that time he become a regular contributor for The New York Times, Human Rights Watch, Newsweek, and TIME Magazine, among other international publications.

Over the years Moises’ work has received awards from the World Press Photo, Pictures of the Year and the Overseas Press Club and his photographs have been shown in a several exhibitions worldwide.

In 2010 Moises was invited to join Magnum Photos as a Nominee and became a full member in 2014. He now lives in Spain.

“I will guide students through creating a coherent documentary photo story with a strong emphasis on authorship, conducting daily critiques, group and individual sessions, and lectures. Students will be challenged to develop a personal working method and a unique vision.”

A self-taught photographer, Newsha began working professionally in the Iranian press at age of 16, at women’s daily newspaper ‘Zan’. At the age of 18, she was the youngest photographer to cover the 1999 student uprising, which was a turning point for the country’s blossoming reformist movement and for Newsha personally as a photojournalist; a year later she joined New York based agency Polaris Images.

In 2002 she started working internationally, covering the war in Iraq. She has since covered regional conflicts, natural disasters and made social documentary stories. Her work is published in international magazines and newspapers such
as Time Magazine, Newsweek, Stern, Le Figaro, Colors, The New York Times, Der Spiegel, Le Monde, NRC Handelsblad, The New York Times Magazine and National Geographic.

In 2009 Newsha covered the Presidential elections in Iran, which ended up in chaos and forced her to temporary halt her photojournalistic work. Instead she started working on projects that experts describe as a mix of social documentary photography and art.

Her work has been displayed in dozens of international art exhibitions and has been on show in museums such as the Victoria & Albert, LACMA in and the British Museum, and the Boston Museum of Fine Art.

Newsha became a Magnum nominee in 2015.

“I am a self-taught photographer and I will help you develop your own story idea’s and stop you from doubting yourself while trying to execute them. The way we tell stories is changing and boundaries between journalism, documentary and art are shifting. I will help you explore idea’s that go beyond the labels photographers often use to describe their work, without losing your message.”

Workshop participants should be able to show a good level of photographic aptitude and a desire to learn. Candidates will be expected to arrive comfortable with their equipment and ready to photograph. Each workshop is limited to 13 participants and photographers will be selected on the perceived benefit to their career and development. Each applicant will be able to choose the photographer they would like to work with and all efforts will be made to accommodate their choice.

Photographers should prepare sufficient research relating to what they wish to shoot prior to arrival. Candidates are expected to formulate realistic projects in the geography and time supplied. Magnum will provide a suitable classroom infrastructure and participants will be responsible for their own time management.

This workshop is not so much about learning new technical skills, but rather improving each student’s own unique photographic vision.

Due to the fast pace of the workshop Magnum highly recommends that participants produce and edit their work digitally, using their own laptops. Please note – all workshops will be conducted in English.

Upon acceptance, students will be emailed a welcome package with further information on working in and traveling to Tokyo (for international applicants) and the workshop schedule which is subject to change.

The deadline to apply is Friday 10th February.
Successful applicants will be selected through a combination of the merit of their work and their personal statement, and in the order of the application received.
All applications received after Friday 10th February will be reviewed, space permitting, until Friday 17th February.
When the applicant is accepted the full payment of the tuition will be payable within 5 days.

A JPY50,000 application fee is required for each application. If accepted, this balance will be applied to the final tuition. If the student is not accepted, a refund of the application fee, minus a JPY1000 processing charge, will be granted.

Please ensure you have the necessary travel documents & relevant visas in order to attend the event. Magnum Photos can provide letters of support where necessary.

For any queries please feel free to contact Chloé Jafé in Tokyo: chloejafe@magnumphotos.co.jp

If a participant decides to cancel for whatever reason, this must be confirmed in writing. Magnum Photos will reimburse all the registration costs except for JPY1000 administration fee, if the participant informs Magnum Photos of cancellation at least 3 weeks before the first day of the workshop. Beyond this time limit, Magnum Photos will charge the following:
– 50% if cancelled between 8 and 20 days before the workshop commences.
– 100% if cancelled less than 7 days before the workshop starts.
All workshops that are commenced but not completed through the fault of either the contractor/or participant need to be paid in full. Magnum Photos is not responsible for reimbursement of travel expenses in case a workshop is cancelled. We highly recommend that you buy refundable air tickets and/or travel insurance. Magnum Photos reserves the right to change the details of the advertised programme as required.