In the spirit of humanitarian photography for which the agency has become known for, Magnum Photos continues to tell the global story of people on the move Chris Steele-Perkins Refugees In the desert. The Sha-alaan One camp is the worst camp. They have orderly food lines with thousands of refugees waiting calmly for food distribution from the Charitas charity organization (...)
. Jordan. 1990. © Chris Steele-Perkins | Magnum Photos
License |

"“Land makes people into what they are. Of that I am sure. If they lose it, they forfeit their solvency and a little bit of their souls, which they will spend the rest of their lives trying to regain.”
" Stuart Franklin AFRICA. Sudan. Kassala. January 6th 1985. During the past few days 35,000 persons have left the Tigre province in North Ethiopia and crossed the boarder into Sudan to reach the Takalabab camp (ne (...)
ar Kassala) in the eastern part of the country. Each day 850 refugees are evacuated to Wad Kowli, farther south, by trucks furnished by the United Nations Organization. While waiting for their time to leave, the others survive under extremely difficult conditions. A small group of doctors of the organization Medecins Sans Frontieres take care of their most urgent heath problems. All the same, many refugees die every day, victims of dehydration or malnutrition. © Stuart Franklin | Magnum Photos
License | Towell, like many of his Magnum colleagues, has met and photographed people who have lost their home and their homeland all over the world. People who, for political or economic reasons, were forced to leave their country; into exile by war or natural disasters, and who possessed only the little they could carry. Some sought asylum in the West, others ended up in refugee camps or tried in vain to return to their own countries.

The exhibition Exile eschews any form of historical, chronological or geographical order. The aim is to visualize the sheer number of international conflicts which have occurred since the Second World War, and the resultant masses of exiles and refugees. Similar in their fate, the refugees progress towards an uncertain future, uprooted, homeless, transient.

In the spirit of humanitarian photography for which the agency has become known for, Magnum Photos continues to tell the global story of people on the move. In summer 2015 Magnum embarked on a collective process to document the recent refugee crisis in Europe, producing over twenty visual stories and counting, which highlight not just the situation as it unfolds in the Mediterranean but also the wider global story of migration in the Middle East, Africa, South America and China.

The work can be seen as a special editorial partnership with MSNBC.com, as collaborations with the International Committee of the Red Cross and in autumn 2016 Magnum Photos will publish ‘Europa – An Illustrated Introduction to Europe for Migrants and Refugees’, a multilingual book which will provide newcomers with information on Europe’s recent immigration history, practical information for major destination countries and the testimonials of the diverse people who make Europe what it is today. Jérôme Sessini A man is seeing running the street as warehouses are on fire. On January 12 2010, Haiti was hit by an earthquake of magnitude 7, which mainly struck the area around the capital city. It left an est (...)
imated 200 000 dead, and over 1 million displaced people. The Caribbean island is one of the poorest countries in the world and is plagued by political unrest. In the wake of this devastating natural catastrophe, members of G7 countries decided to drop the debt owned by the Haitian state. Port-au-Prince, Haiti, January 22, 2010. © Jérôme Sessini | Magnum Photos
License | 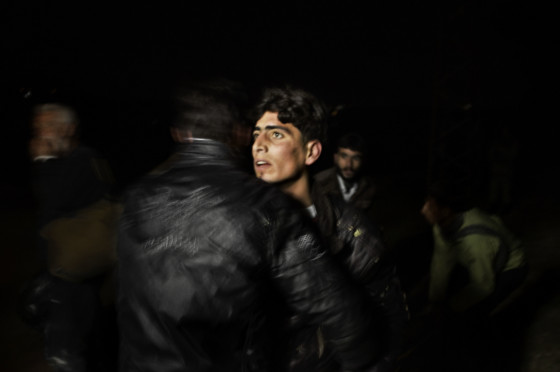 Moises Saman Syrian refugees arrive inside Turkish territory under the cover of night after being smuggled from in from Syria. Along the Turkey-Syria border. March, 2012. © Moises Saman | Magnum Photos
License | 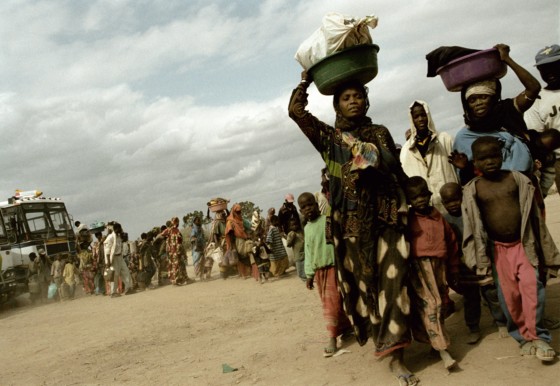 Thomas Dworzak Ethnic Albanian refugees from the village of Vakshince. The village was shelled for several weeks by Macedonian security forces fighting Albanian NLA/ UCK rebells. During a break in the fighting th (...)
e entire civilian population left the village to the Kumanova area. Men where separated from the women and children by Macedonian police who performed "Parafin Tests" on the men to determine if they had been fighting. Rezanovce, Republic of Macedonia. May, 2001. © Thomas Dworzak | Magnum Photos
License |