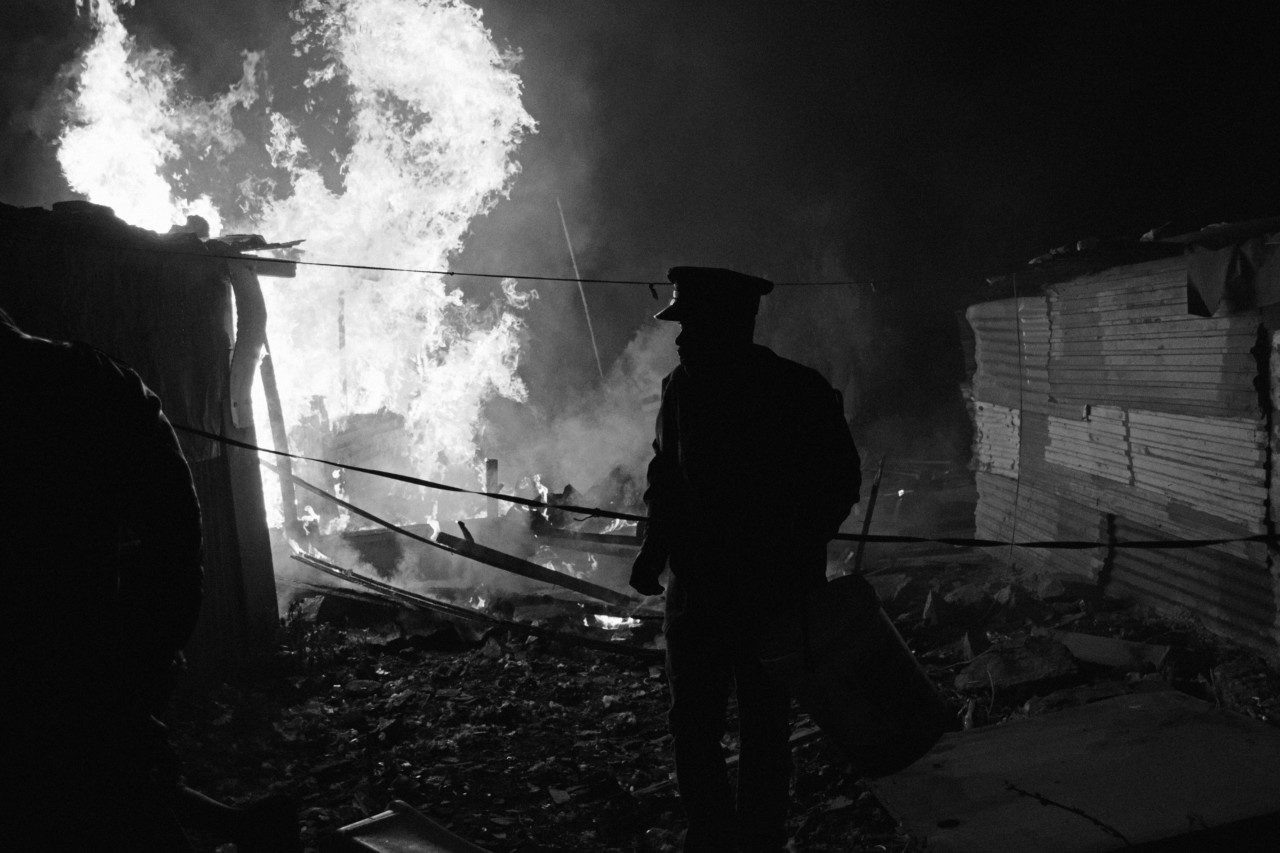 Lindokuhle Sobekwa From a series titled “I carry Her photo with Me”, about my sister Ziyanda who disappeared for 15 years and was found by my mother in a men’s only hostel called Mshaye aze afe. Shortly thereafter sh (...)
e died. We lost our home, we lost everything. My house on fire. South Africa. Johannesburg. Thokoza. 2014. © Lindokuhle Sobekwa | Magnum Photos
License |

Magnum Photos and FotoFest have organized a series of professional development seminars to provide learning opportunities for photographers, photographic artists, and arts professionals. These seminars aggregate decades of invaluable information and practice to further professional careers and stimulate appreciation for the art of photography.

How Stories Choose Us is a two-part seminar focusing on the diverse ways narratives arise within a photographic practice, and how to identify and develop these narratives into compelling projects. Shannon Ghannam, Global Director of Education at Magnum Photos will present examples of projects from Magnum photographers as well as practical advice for emerging and professional photographers when initiating personal projects.

This talk will be followed by an in-conversation discussion with FotoFest Biennial 2020 exhibiting artist and Magnum photographer Lindokuhle Sobekwa, led by Amber Terranova. Sobekwa will be showing 42 book dummy spreads from I carry Her photo with Me.

FotoFest is curated by Mark Sealy MBE, Director of the renowned London-based photographic art institution Autograph ABP. African Cosmologies is a large-scale group exhibition that examines the complex relationships between contemporary life in Africa, the African diaspora, and global histories of colonialism, photography, and rights and representation. The exhibition considers the history of photography as one closely tied to a colonial project and Western image production, highlighting artists who confront and challenge this shortsighted, albeit canonized lineage. 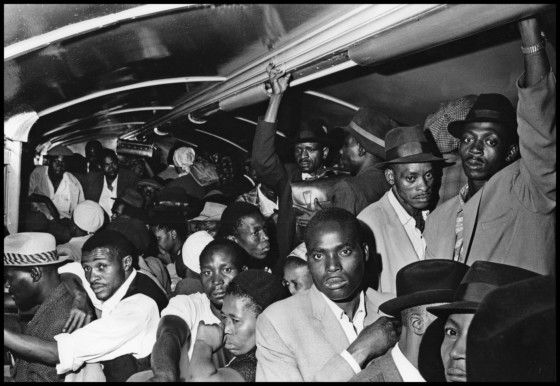 Ernest Cole All stand packed together on the floors and seats. (According to Struan Robertson thieves and pickpockets (tsotsis) had a field day in these extremely crowded conditions, especially on pay-day.) (...)
South Africa © Ernest Cole | Magnum Photos
License | 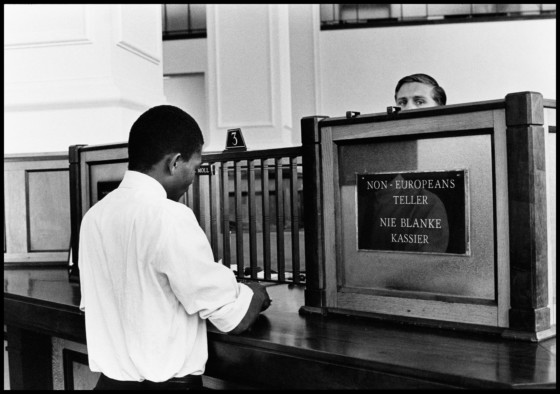 Ernest Cole According to Struan Robertson this was in the bank in the building where he and Cole had their studio. There were separate counters for blacks and whites. South Africa. Johannesburg. © Ernest Cole | Magnum Photos
License |

A portfolio of prints from Ernest Cole’s acclaimed book House of Bondage will be on view during the Biennial. In 1967, Cole made history with the publication in New York of his seminal book House of Bondage, one of the most important and influential photography books of the 1960s which revealed to the West the Brutality of the apartheid regime in South Africa. Stripped of his South African passport after the publication of House of Bondage, Cole effectively became a ‘citizen of nowhere’, becoming homeless throughout the 1970s and 1980s and eventually passing away in 1990. From the early 1970s his archive went missing, presumed lost, until 2017 when his negatives were rediscovered in Stockholm, Sweden.

As an international platform for photographic and new media art, the FotoFest Biennial has become known as a showcase for the discovery and presentation of important new work and talent from around the world. The Biennial takes place citywide in Houston with participation from leading art museums, art galleries, non-profit art spaces, universities and civic spaces. Lindokuhle Sobekwa From a series titled “I carry Her Photo with Me”, about my sister Ziyanda who disappeared for 15 years and was found by my mother in a men’s only hostel called Mshaye aze afe. Shortly thereafter sh (...)
e died. We recently got a home, a RDP house that my mother struggled to get for the past 23 years. After a long history of displacement. Thokoza. Johannesburg. South Africa. 2017. © Lindokuhle Sobekwa | Magnum Photos
License |

Lindokuhle Sobekwa is a South African photographer born in Katlehong, Johannesburg in 1995. Sobekwa came to photography in 2012 through his participation in the Of Soul and Joy Project, an educational programme run in Thokoza, a township in the southeast of Johannesburg. He studied with Bieke Depoorter, Cyprien Clément-Delmas, Thabiso Sekgala, Tjorven Bruyneel and Kutlwano Moagi.

Sobekwa’s early projects dealt with poverty and unemployment in the townships of South Africa, as well as the growing nyaope drug crisis within them. His ongoing works, as well as revisiting those early themes, also deal with his own life – for example his relationship with his sister, Ziyanda, who died after becoming estranged from her family.

In 2013, Sobekwa was part of a group show in Thokoza organised by Rubis Mecenat at the Ithuba Art Gallery in Johannesburg. His essay Nyaope was published in the South African newspaper Mail & Guardian in 2014. The work was also published in Vice Magazine’s Annual Photo Issue, and the De Standaard the same year.

In 2015, Sobekwa received a scholarship to study at the Market Photo Workshop where he completed his foundation course. His Series Nyaope was exhibited in the ensuing group show, Free From My Happiness, organised by Rubis Mecenat at the International Photo Festival of Ghent in Belgium. In 2016, he left South Africa for a Residency in Tehran, Iran, with the No Man’s Art Gallery. The same year his work was displayed in the travelling iteration of Free from my Happiness.

His work features in the book Free from my Happiness edited by Bieke Depoorter and Tjorven Bruyneel . He also took part part in the group show Fresh Produce, organized by Assemblages and VANSA at the Turbine Art Fair in Johannesburg. Lindokuhle Sobekwa is also an assistant to the Of Soul and Joy Project Manager as well as a trainee at Mikhael Subotzky Studio.

Shannon Ghannam is the Global Education Director at Magnum Photos, responsible for the celebrated agency’s educational programming globally, including the recently launched online learning platform Magnum Learn learn.magnumphotos.com. Previously she managed Content Strategy and Development at Reuters, working to showcase on multiple platforms the agency’s multimedia content. Shannon has collaborated on numerous photographic books, international exhibitions and multimedia projects including the Emmy award winning photojournalism app Reuters The Wider Image. Shannon has worked in various roles during a 20 year career including Screen Labs, Night Contact photography and multimedia festival, Australian Associated Press (AAP), The Australian Photojournalist Journal, The National Archives of Australia as well as developing a year long collaborative portraiture project with refugee communities for the Australian Red Cross. She studied at the Queensland College of Art in Brisbane, Australia where she graduated with First Class Honours in Photography.

Amber Terranova is an experienced NY-based photo director, educator and visual producer. She is currently teaching at the School of Visual Arts and consulting with Magnum Photos, Education. Amber has extensive marketing, photo directing, commissioning and consultancy experience for multiple major brands and publications around the world.

She has worked as a photo editor at People Magazine, Time Home Entertainment, The New Yorker, and from 2008 to 2012 she held the position of Photo Editor for Photo District News (PDN), the leading magazine for professional photographers. Previously, she held positions at New York Magazine and Outside magazine. In 2013 Amber was the interim Director at the Bilder Nordic School of Photography.

Amber is committed to photography education and to helping photographers realize their creative and career potential. She has taught photography workshops in the US, Europe, Asia and has been a guest lecturer at several institutions. In addition, she has judged a number of international photo competitions, including the Kuala Lumpur Photo Awards, Review Santa Fe, Photolucida’s Critical Mass, International Photography Awards, Julia Margaret Cameron Award, among others. Amber is an advisory council board member for CENTER, a non-profit that honors, supports, and provides opportunities to gifted and committed photographers.