How Susan Meiselas’s home neighborhood produced one of her most influential bodies of work – a study of adolescence, femininity and the gentrification of New York 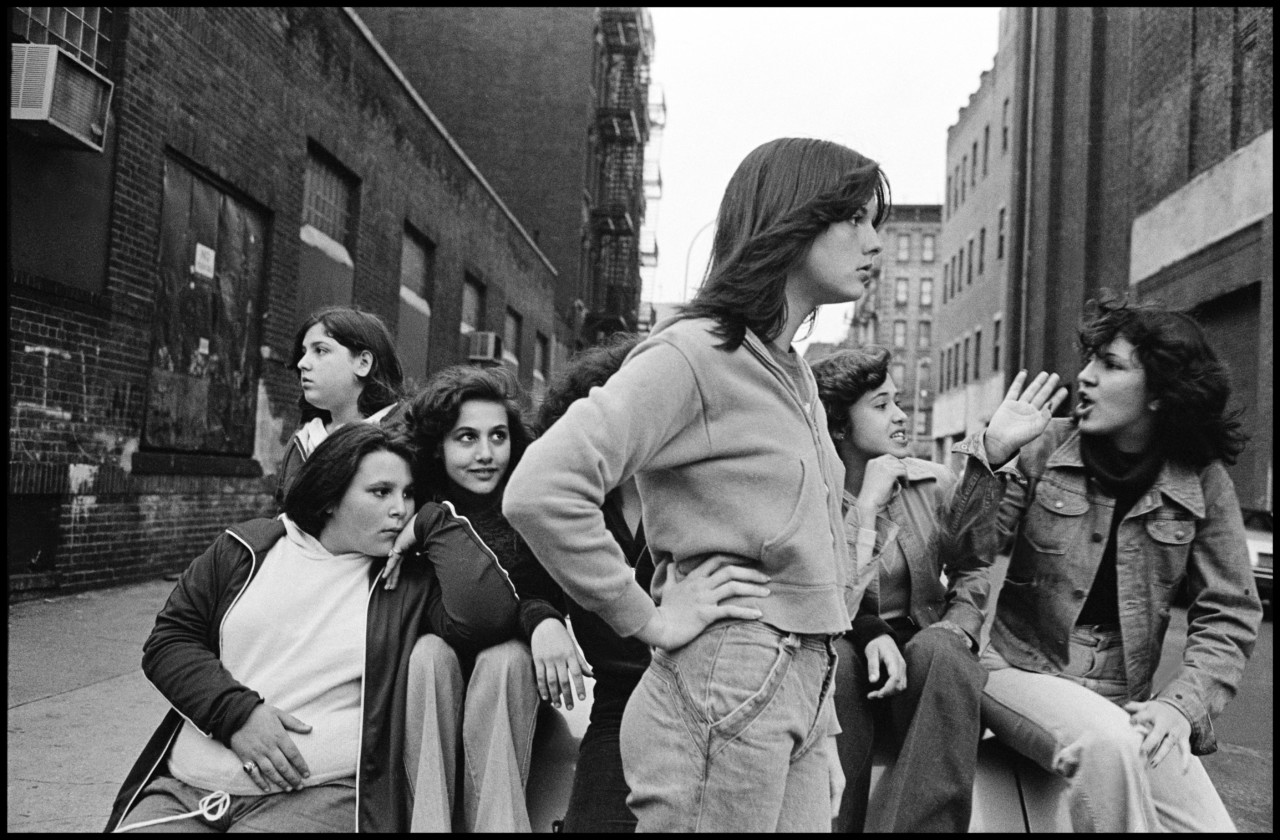 Signed copies of Prince Street Girls are available in limited numbers on the Magnum Shop. You can see other Magnum publications made in New York, here, and explore the newly curated New York Collection – spanning fine prints, contact sheets, books and more – here.

In 1974, between the Carnival Strippers years and Nicaragua, June 1978 – July 1979, Susan Meiselas moved to Mott Street, on the outskirts of a neighborhood in downtown Manhattan, known as ‘Little Italy’ because of its largely immigrant Italian population. Meiselas was an outsider in the neighborhood, but a chance encounter soon changed that, forming the beginnings of a long-term photographic series about youth and femininity in the 1970s. Cycling home one day, she recalls “a blast of light flashed into my eyes. Its source was a group of kids standing with a mirror, focusing the sun on my face, nearly blinding me. That was the day I met the Prince Street Girls.”

Looking back on that first meeting as an adult, one little boy, Frankie remembers, “We were all sitting out front, bored, and Susan was riding her bike, and Carol had one of those hand-held mirrors and she was flipping the sun and goofing around and flashing it at her to the corner. I don’t know what she was thinking – she went into her apartment and got her camera.” 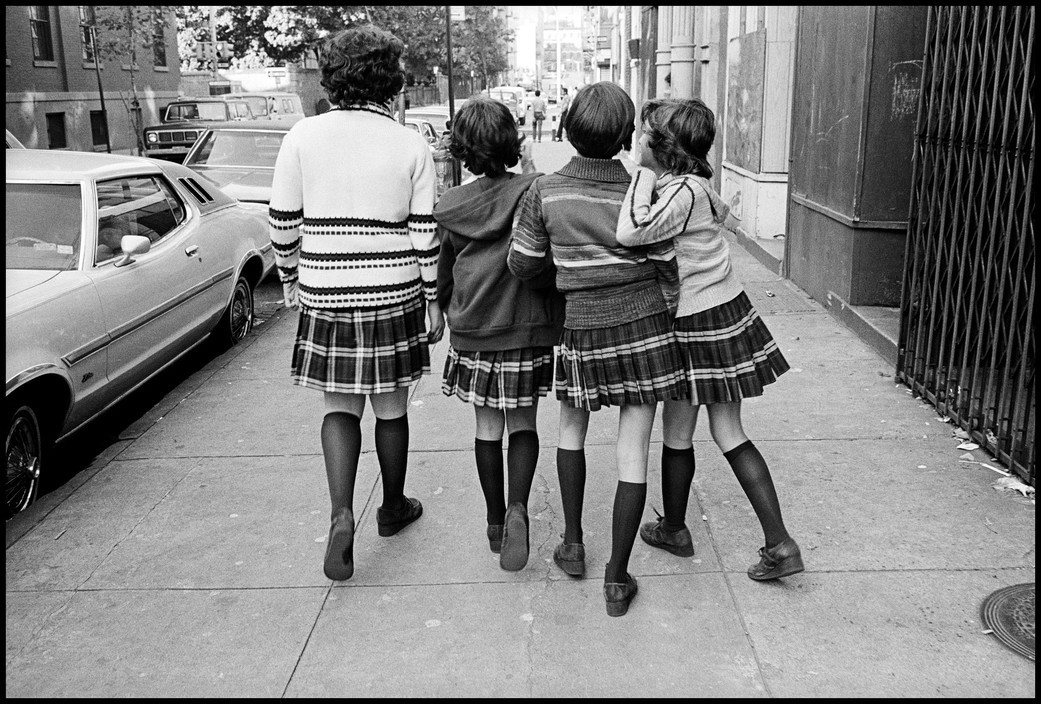 Her series documented the daily lives of a group of local Italian-American pre-teen girls, who in the mid-1970s made the corner of Prince Street and Mott street their stomping ground. Meiselas was able to capture the girls’ social interactions and the synergy of their tight-knit group, some of whom were also related. As they posed for each other with growing self consciousness, Meiselas photographed them with a gentle familiarity — she captures them draped over each other, mirroring one another’s body language, often wearing the same clothes.

As with Carnival Strippers — a series that documented the lives of women who performed striptease for small-town state fairs across New England, as well as the men who attended and promoted the shows — here, Meiselas captured portraits of the girls in an uncontrived state, removed from the artistic traditions of the male gaze. Although this time, she turned her lens on her subjects’ early experiences with womanhood, and the parallel shedding of innocence. 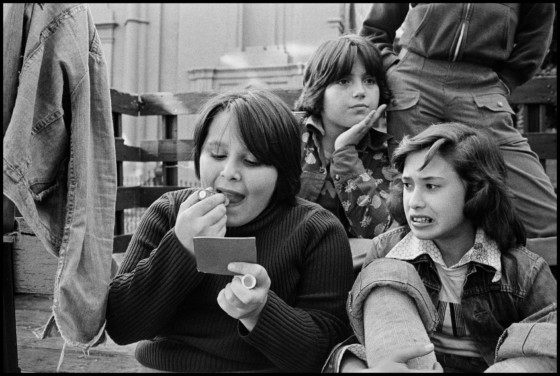 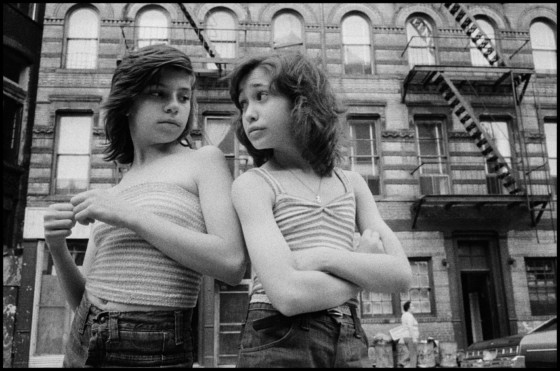 In Meiselas’s earliest images from the series, the Prince Street Girls are coddled in a childlike innocence, but fueled by curiosity. Writing of her experiences shooting in their after-school hours, Meiselas recalls, “They’d see me coming and call out, ‘Take a picture! Take a picture!’” Photographed on the cusp of adolescence, the girls walk home in their traditional plaid catholic school uniforms, stockings yanked up high, hanging off playground structures and blowing bubbles of gum. “At the beginning, I was taking pictures just to share with them,” Meiselas explains. A physical exchange forms the basis of emotional trust in the relationship between Meiselas and her subjects, a gesture that often informs her practice.

"I was fascinated by their relationships with each other. They simply liked to hang out together. " 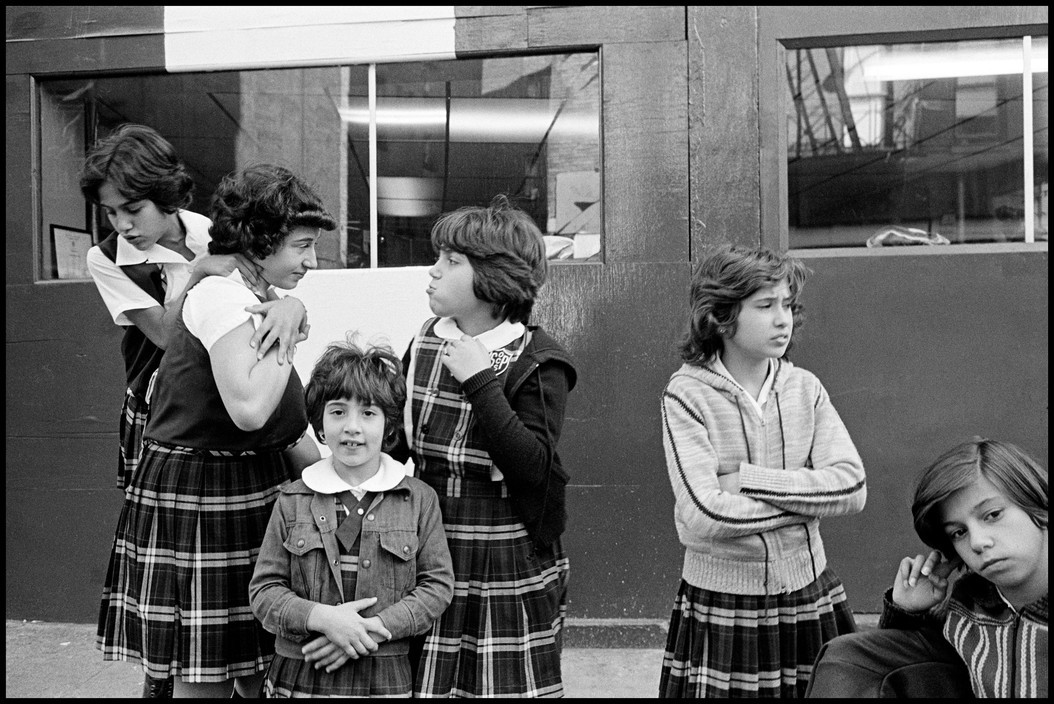 In an excerpt from On the Frontline (2017), the photographer writes: “I was fascinated by their relationships with each other. They simply liked to hang out together. There was no story, no narrative. We didn’t plan our encounters. If we met in the market or at the pizza parlor, they would reluctantly introduce me to their parents but I was never invited into any of their homes. I was their secret friend, and my loft became a kind of hideaway when they dared to cross the street, which their parents had forbidden.” 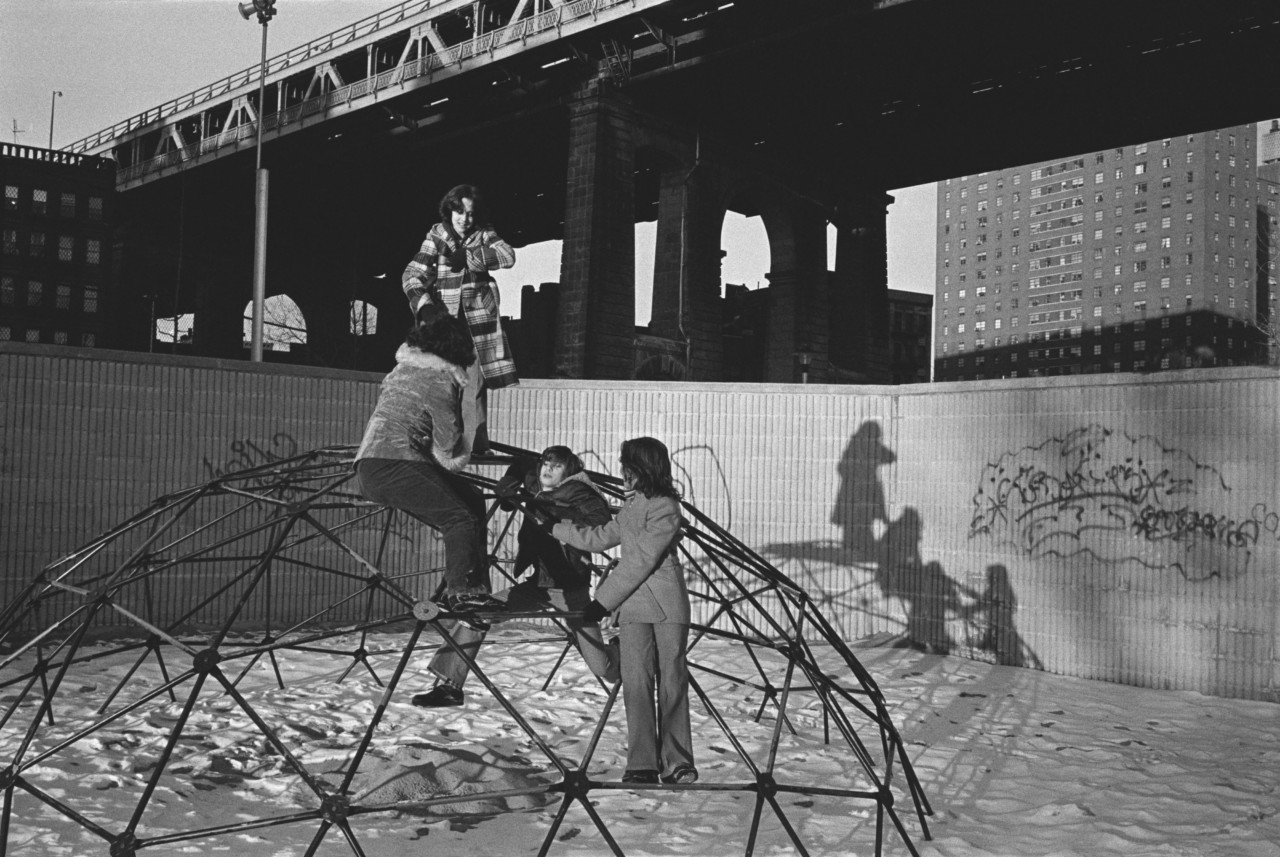 The Prince Street Girls series ultimately captured the transience of youth. Only two years later the same girls are photographed casually smoking cigarettes at Manhattan Beach, midriffs proudly displayed in their ever-shrinking crop tops. Espadrilles replace trainers, and lipstick, gum. They are now nubile teenagers, as their self conscious posturing in Meiselas’s portraits suggests. Reflecting on their budding sexuality, Meiselas writes: “In the early seventies there was little discussion about the dominance of a sexualized culture or the influence of advertising, so who were they imitating?” Maybe they were posing to impress each other. They were still in their awkward little bodies trying to find themselves.” 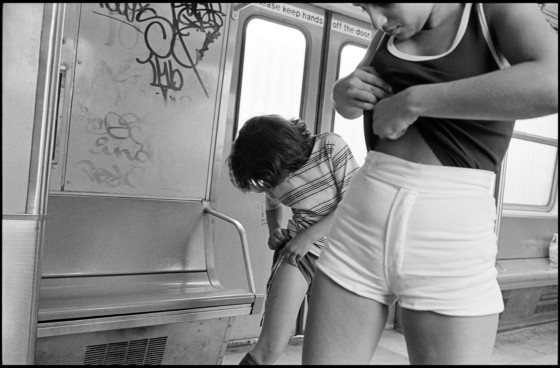 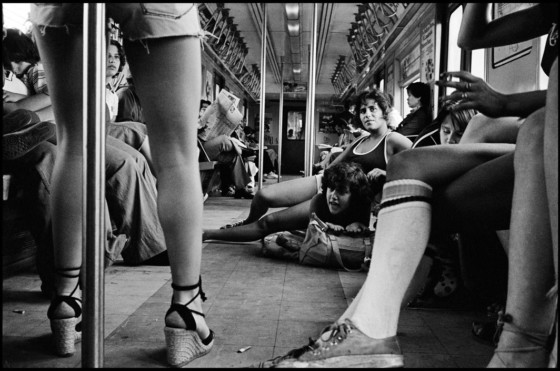 "By 1978 they were changing, and I wanted to capture them growing up."

In 1978, Meiselas’s camera bears witness to their first night-time forays. Early exchanges with other young people who crowd the city stoops, on bikes with boomboxes blaring, smoking a token cigarette. The images show the rapidly diminishing borders of their private ‘Little Italy,’ its perimeters being infiltrated by the outside world, threatened by encroaching adulthood: “By 1978 they were changing, and I wanted to capture them growing up. Yet my own focus was shifting. My work was taking me away from the neighborhood.” In hindsight, she adds, “I had no idea then that I would be away for so long.” 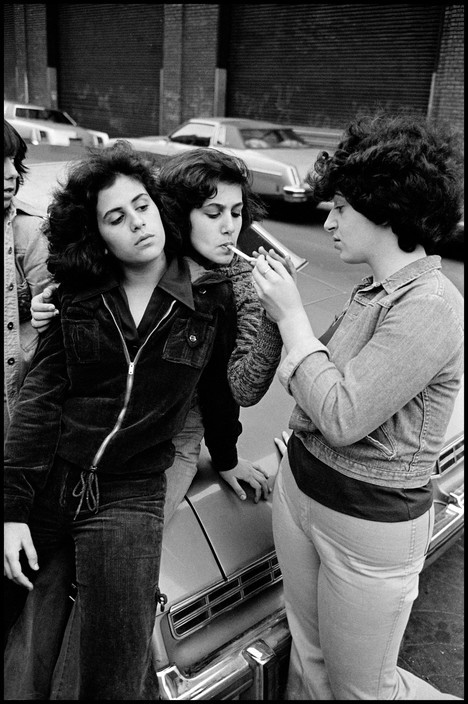 This divide proved difficult for Meiselas to come to terms with, as by then she felt a personal affinity to the series that was uniquely anchored in her own associations with home: “Looking at these pictures now reminds me of how difficult it was to integrate my two lives — family and friends at home, and my life as a photographer on the road.” 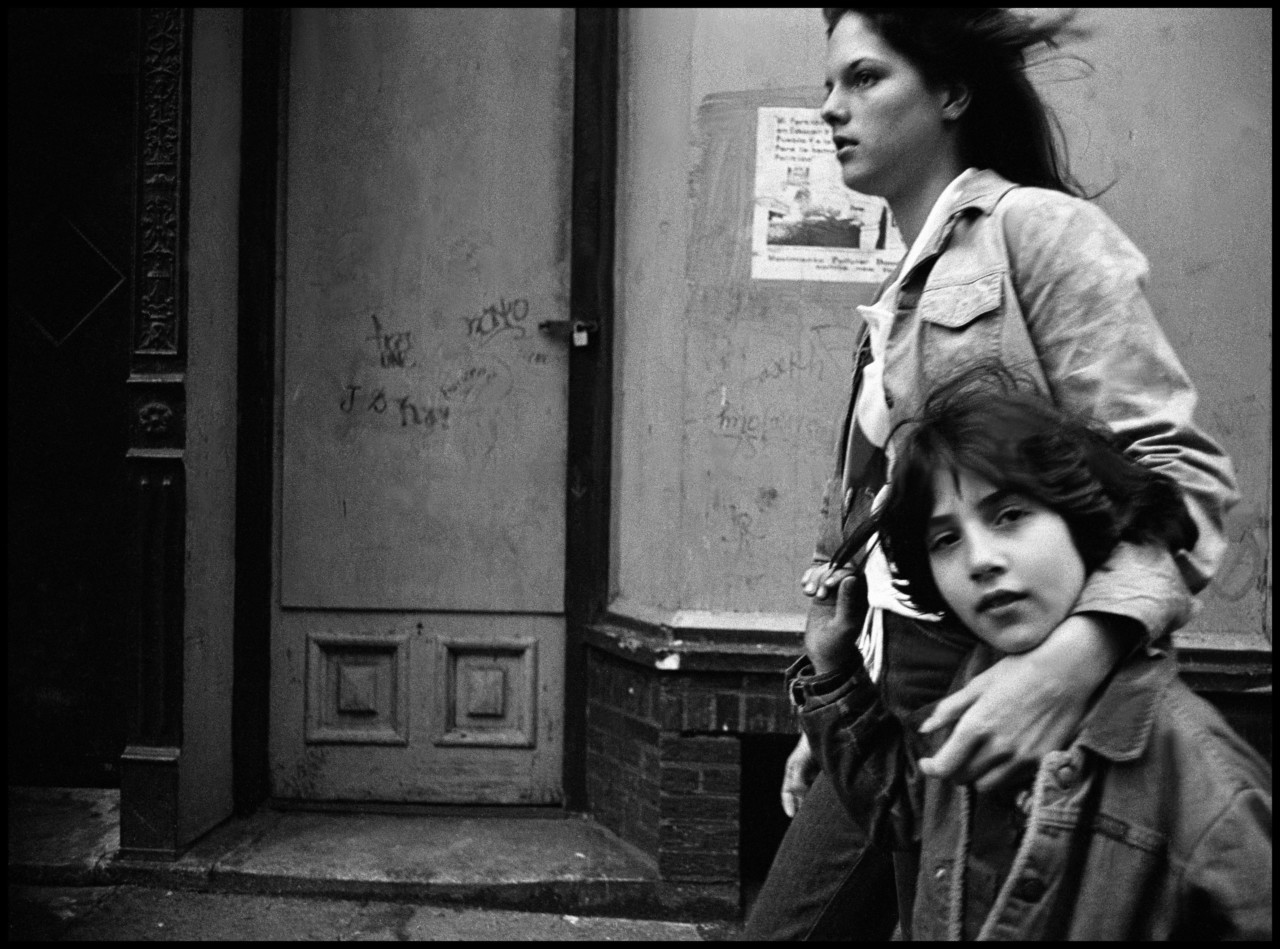 While she intended the series as a subtle observation of puberty, Meiselas laments that “the process was ruptured just when they entered adolescence, and I left the country.” However she was able to come back now and then from Central America. Upon finally returning to New York a decade later, she found the girls’ lives had continued without her. “The girls were long past their teens, beyond the boundaries of our streets, and beginning families of their own.” 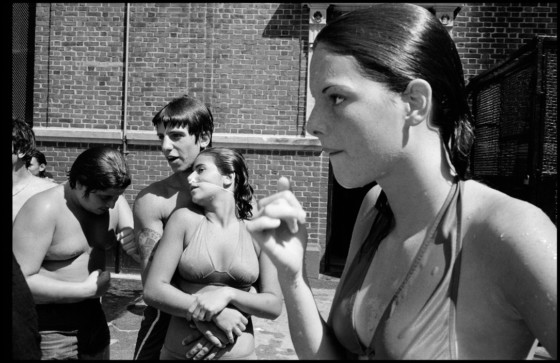 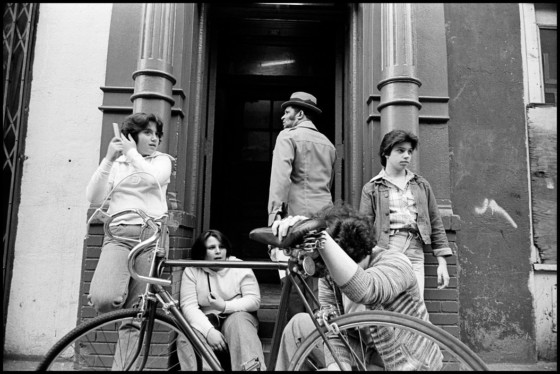 "The girls were long past their teens, beyond the boundaries of our streets, and beginning families of their own." 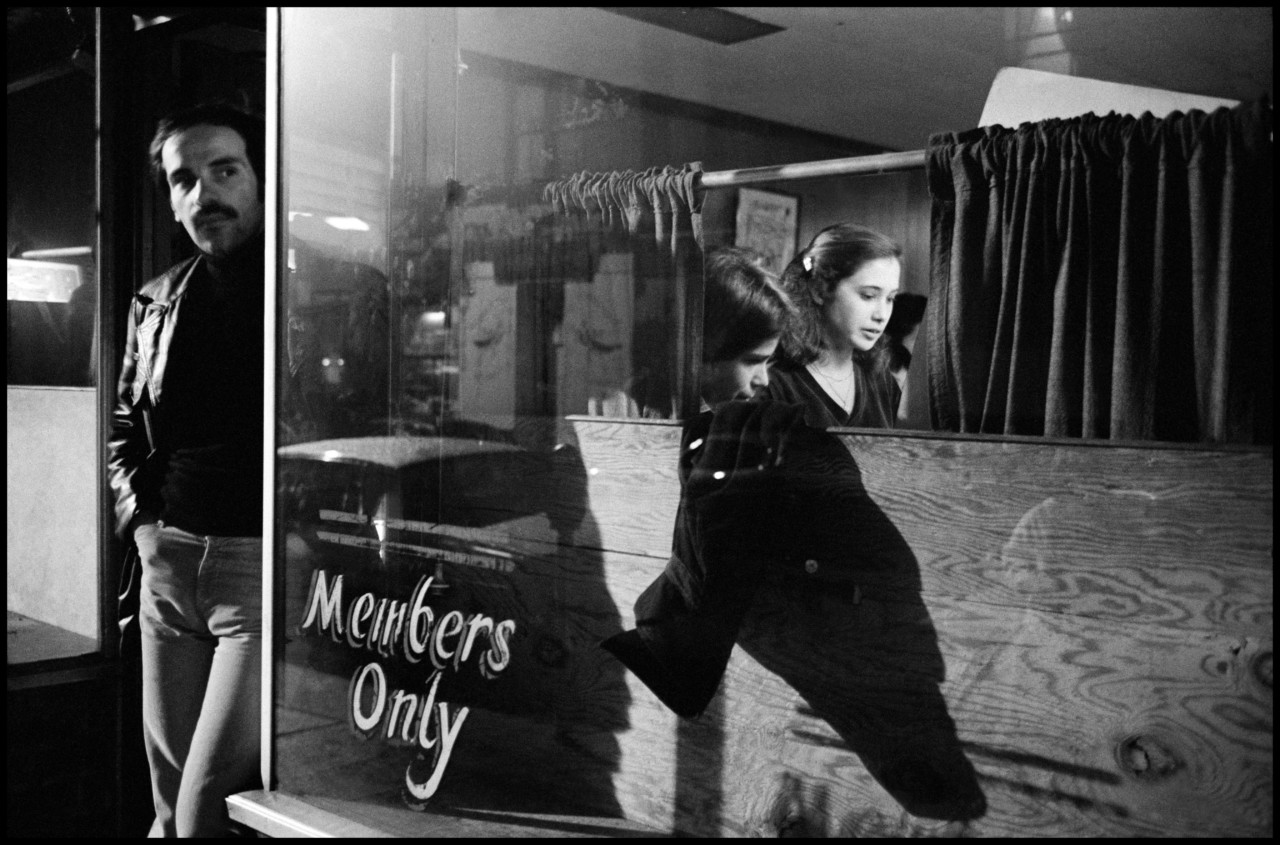 But in giving us a window into these young women’s lives, Meiselas managed to frame something of their larger surroundings. The series is as much a document of the girls’ passage into adulthood as it is a document of Little Italy’s gentrification. The series is an ode to a time and a place that no longer exists. Today, Meiselas still lives in the neighborhood, aware of its many transformations and past lives. She writes: “It’s filled with young models and dot-com-ers, chic cafes and expensive shops. It’s almost impossible to imagine the streets as they once were”.

Frankie said, “People are not welcoming [the Italian community] into the new community. It’s as if to say ‘What are you still doing here?'”

Although the original Prince Street Girls have left, they sometimes return to call on the photographer with their daughters in tow. Meiselas still feels the series was cut short. “The full story of young girls becoming women and going on with their lives, leaving the neighborhood and having children, might have become a different, longer story,” but she adds, “I made a difficult choice to follow another path, and that had consequences.”

In June 2017, during an exhibition of the work at Higher Pictures gallery, Susan Meiselas brought a catalogue of the images to the women who were once (and always) the Prince Street Girls. The video below captures some of their reaction as they reminisce about their childhood and the fashions of their youth.