Chris Steele-Perkins Thein Mynt, left, was born in Burma from a Burmese mother and an Australian father. His brother Chris Steele-Perkins (in doorway) shared the same mother but he had an English father. Thein's partne (...)
r, Jean Millar, on the sofa, is English and behind her is their son Lwin. "Hiding" behind the sofa is Lwin's English girlfriend Francis. At the front in blue is Chris' wife Miyako Yamada from Japan, behind her is Chris' son from a previous marriage, Cedric. On the front table is a small photograph of Thein and Chris' Burmese mother, Mary. London, England, Great Britain. 2015. © Chris Steele-Perkins | Magnum Photos
License |

The New Londoners, a project by Burma-born British photographer Chris Steele-Perkins, has been four years in the making – a comprehensive visualization of the rich cultural make-up of families in the British capital. The project has culminated in a book documenting 164 families, collectively hailing from 187 countries – its publication set to chime with Britain’s projected leaving of the EU.

Very early on in the project, Steele-Perkins knew he’d be including his own family in the body of work. “It reflects the reality I was trying to deal with, which is that although I’m very English I’m still considered by most people an immigrant,” says the photographer. “The question I still continue to be asked is ‘Where are you from?’ Which has often got the subtext that you don’t really belong here.

“My own family would make a pretty good fit with my wife being Japanese, my half brother being half Australian and me being half Burmese. I mean it’s a pretty decent fit for the family profile, so fairly early in I thought I would include myself, but built around my brother rather than myself, really. I’m tucked away at the back. My mum’s in the picture as well, a small tiny framed print in the foreground.” 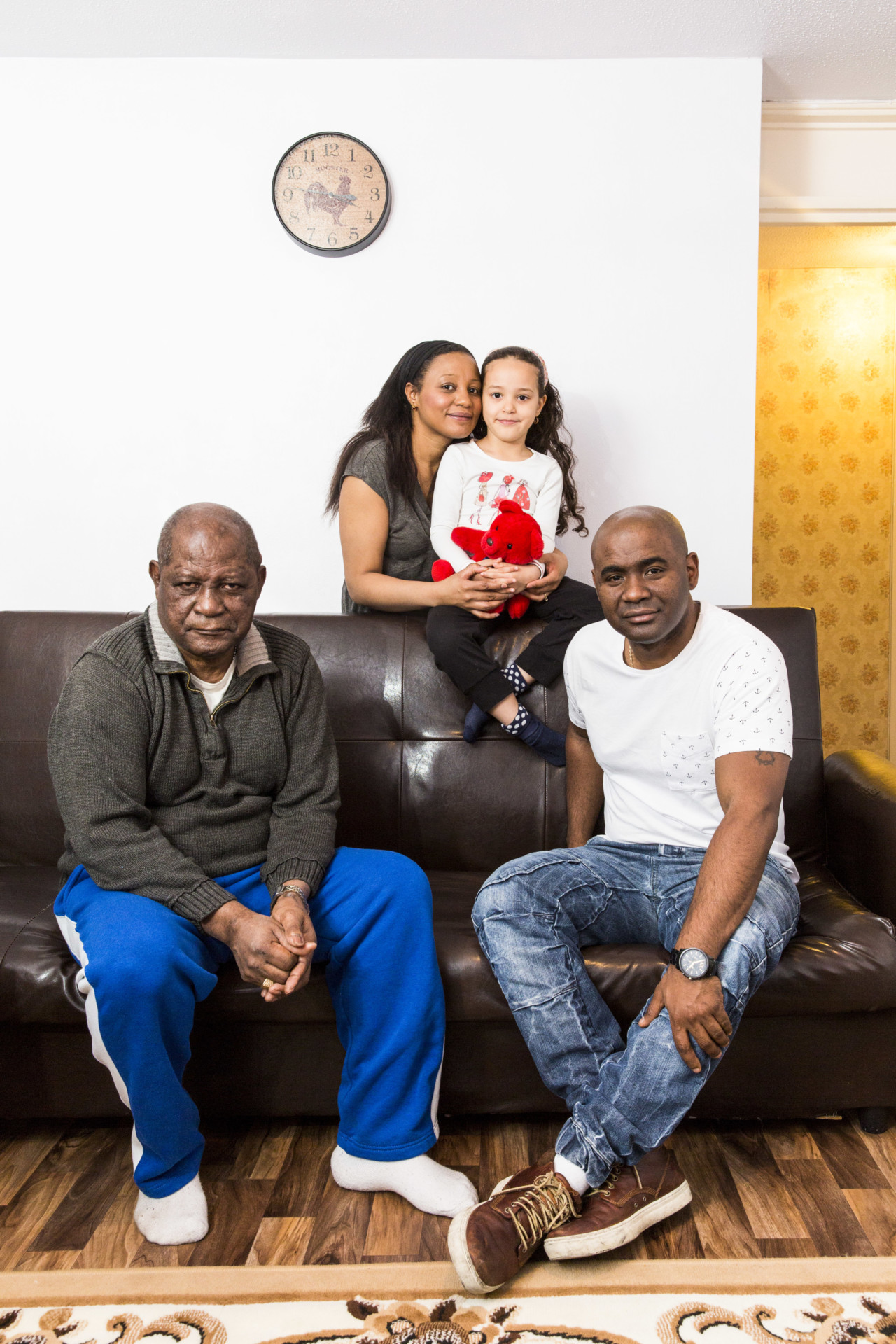 "The question I still continue to be asked is ‘Where are you from?’ Which has often got the subtext that you don’t really belong here."

Having set himself the challenge of photographing people from every country in the world residing within the capital, the concept of categorization of countries presented some interesting questions, exemplified by his portrait of a family who hailed from the Chagos Islands – a British territory in the Indian Ocean.

The islands of the Chagos Archipelago were uninhabited until the French established copra plantations on them, using slave labour, in 1793. The islands were ceded to Britain in 1814 and have been British territory since. A 1966 agreement between the British and American governments resulted in the depopulation of the Archipelago through forced expulsion of its inhabitants by the United Kingdom, beginning in 1968 and concluding in 1973.

Some Chagossians and human rights advocates have said that the Chagossian right of occupation was violated by the British Foreign Office as a result of that agreement, which sought to provide an unpopulated island for a U.S. military base. They have also asked that additional compensation and a right of return be provided. In February 2019, the UN’s highest court advised that the UK should end its control of the Chagos Islands in the Indian Ocean “as rapidly as possible”.

“The idea had originally been to try to put together families from all the UN recognized states, but I kind of gave that up as an idea because it seemed to be artificial,” explains Steele-Perkins. “I was intrigued to discover people from places like the Chagos Islands, or indeed the Marshall Islands. There was a horrible irony about them being here. They didn’t particularly want to be be here. They hadn’t come of their own free will, as most migrants to Britain do. It’s a sad irony that they’re here, not because they’re trying to escape tyranny. It’s the opposite, they’re trying to get back to their homeland.”

Since Steele-Perkins began making the project Britain voted to leave the European Union. Many foreign nationals in the UK have spoken about a change in feeling since the vote, as they wonder what their futures hold, and whether they are still welcome. Steele-Perkins describes “the feeling that people felt more vulnerable” after Brexit. The photographer notes that the majority of potential participants who changed their minds about being involved the project did so in that “post-Brexit era”.

Steele-Perkins considers this work a historical document. That the British Library has taken it into its collection is significant for him, adding to “the sense of it belonging to the tradition of recording”, recording what he feels is the “greatest political issue of our time” – “migration”.

The New Londoners is published by Dewi Lewis.